After a relatively short production run of four years, the 488 GTB is being replaced as Ferrari’s mainstream mid-engined V8 berlinetta by this car, the F8 Tributo. Somewhere in-between a facelift and a completely new model, the Tributo is clearly very closely derived from the 488, but Ferrari says it moves the game on in a number of important areas.

Being a Ferrari, the story starts with the engine. The F8 features the most powerful version yet of Maranello’s much-feted twin-turbocharged 3.9-litre V8, at least as far as non-special-series cars go, developing an astonishing 710bhp (720 PS) at 7000rpm, with a no-less-impressive 5681b ft of torque at 3250rpm (that’s turbocharged engines for you).

The peak power figure is 50bhp more than for the 488 GTB and is in fact the same figure Ferrari quotes for the special-series 488 Pista. That’s no coincidence, because the V8 is actually an evolution of the Pista engine, complete with many of its lightweight, race-derived internal parts. Expect this news to put one or two Pista owners’ noses out of joint...

Ferrari has also reconfigured the exhaust system, all the way from turbos to tailpipes, to give what it describes as greater intensity and quality of sound.

Thanks in part to the lighter engine internals, the new car is 40kg lighter than the outgoing one, while changes to the chassis hardware and software are said to provide even better control at the limit - the F8 features an updated version of the driver-flattering Side Slip Angle Control and Ferrari Dynamic Enhancer - while also improving ride comfort.

Other dynamic systems to have benefited from recalibration include Adaptive Performance Launch, which analyses grip and optimises torque delivery to maximise acceleration. The 488 GTB’s seven-speed dual-clutch transmission is carried over, but with revised gear ratios.

The official press photos - and time spent studying the car in the metal at its Geneva show debut in March - reveal a more overtly aggressive look than the 488’s, with more extreme aero, much of it derived from experience with the Pista (and therefore from the Challenge racers). This includes the ‘S-Duct’ that runs through the nose of the car, further developed from its appearance on the Pista and said to contribute significantly to an increase in downforce without impacting on the drag co-efficient. ‘Ten per cent more aerodynamically efficient than the 488 GTB’ is how Ferrari puts it.

New, more compact, horizontal LED headlights allowed the aerodynamicists to incorporate extra brake cooling intakes in the nose: by increasing the air-fiow through the wheelarches, the engineering team could avoid having to increase the size of the brakes to cope with the increased performance. Moving further back, the louvred lighweight Lexan rear screen/engine cover not only helps extract heat from the engine bay but is a neat nod to an iconic turbocharged V8 Ferrari of the past, the F40. At the rear, the ‘blown’ spoiler is larger and now wraps around twin light clusters - another nod to classic V8 berlinettas, including the very first, the 308 GTB of 1975. According to Ferrari, these and other features were intended as a stylistic tribute to the great mid-engined V8 sports cars in the marque’s history - another angle on the Tributo name.

The F8’s cockpit is, again, clearly derived from the 488 GTB, though Ferrari says that every element of the dash, door panels and tunnel has been redesigned. New features include a seven-inch touchscreen display for the passenger, already seen on other recent Ferraris. Another detail change, but a welcome one nonetheless, is a smaller-diameter rim for the steering wheel to make it easier and more pleasant to grip, and hence - says Ferrari - enhance the chassis’ feeling of wieldiness and agility.

The F8 is designed to compete head-on with McLaren’s all-carbonfibre 720S, which has an identical 710bhp from its own mid-mounted twin-turbo V8 engine and has been earning rave reviews for its performance, ride and handling. Since the 720S’s arrival in 2017, the 488 GTB has no longer been the clear class leader; the F8 Tributo aims to put that to rights.

No word yet on price, but given the 488 GTB starts at £195,000, we’d expect it to tip over £200,000. No doubt a Spider will follow, probably a few months later if the F8 follows the usual Ferrari pattern. The first customer cars should be delivered later this year, and we hope to bring you driving impressions before the end of the year, too. Should be quite something. 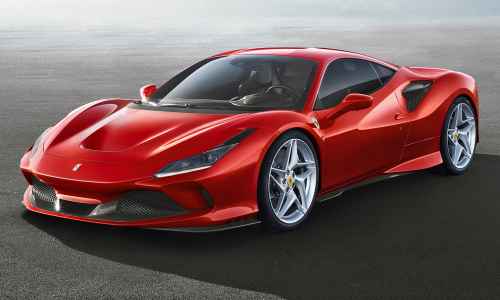 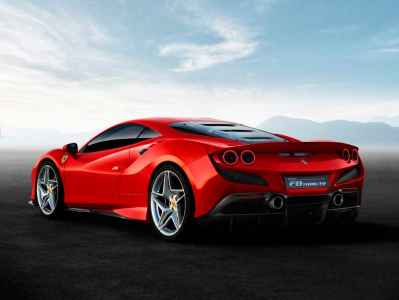 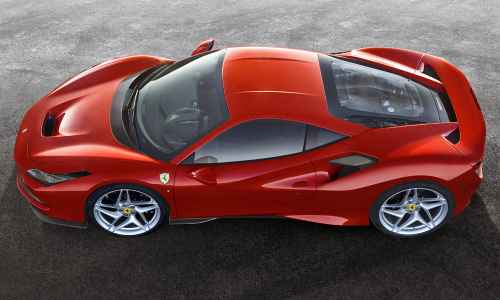 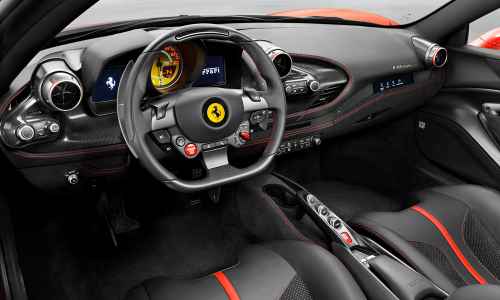 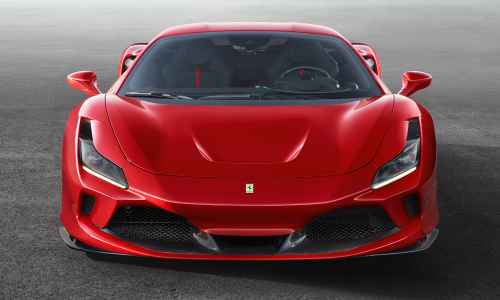 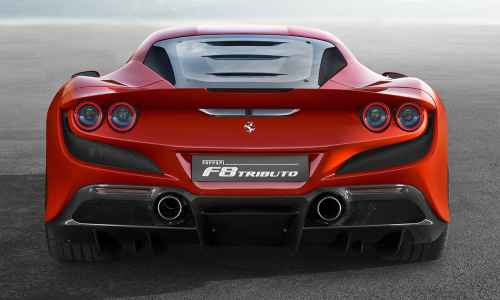 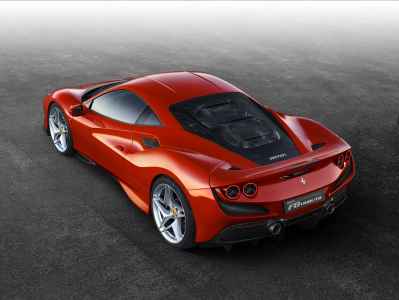 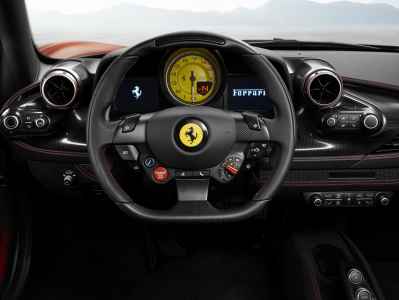 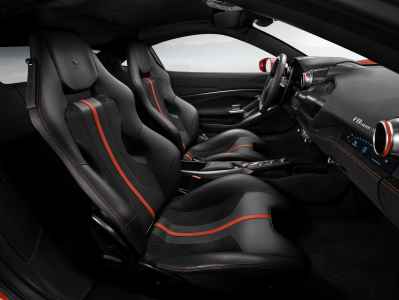 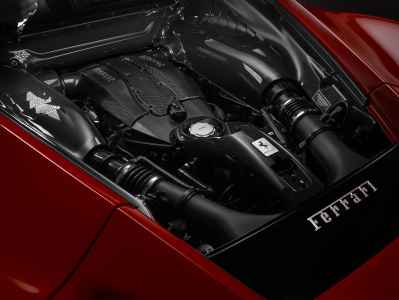 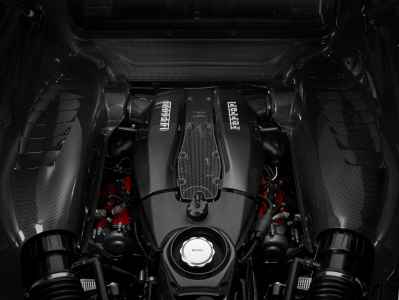 Left: Magnificent twin-turbo V8 now lives under a Lexan engine cover, just like the twin-turbo V8 in the F40 used to. But not even an F40 could touch the F8’s 710bhp and 211mph. Above and below: Cabin has clearly evolved from 488 GTB’s - circular dash vents are one change, thinner steering wheel rim another, while passenger now has their own touchscreen display. Seats (bottom) are a new design.