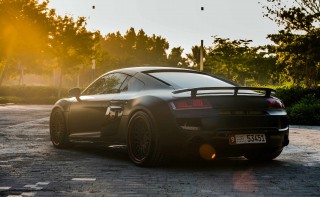 This Audi R8 Typ-42 beauty in comparison to its equine counterpart led me to look up the dictionary definition of an Arabian horse, “a horse noted for their graceful build, speed, intelligence and spirit” and exactly the same descriptors can be apportioned to this car. In 2015 when Brian Maroney moved to Abu Dhabi he had his heart set on a Porsche 911 Turbo so off he went to buy it in Dubai. The journey proved fruitless as it was sold to another buyer during the drive to Dubai. Optimistic searching on car sites led Brian straight to an R8 which immediately caught his imagination and as Brian puts it, “The R8 is probably the most reliable super car out there. It has a great performance to begin with but it also has that exotic classy look to cruise around town, I had to have it” and so Hawaiian Brian as he is affectionately known by all that know him bought the beauty. Incidentally it is because he stayed in Hawaii as a youngster than he earned the nickname, not for his dress sense. 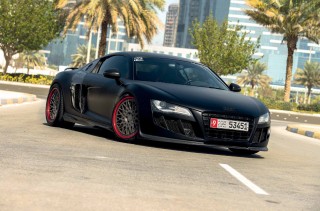 Brian always had the intention of modifying the R8 so we asked him what was the inspiration and motivation to undertake this project. He replied, “I had envisioned building an R8 before and I knew how I was going to do it, I knew exactly what I wanted in my head”. Previous experience that stood him in good stead was when he started off with a 1993 Chevy Corvette as his first project and did minor upgrades to it. Brian then had a 1994 GMC Yukon that was supercharged as his winter vehicle since he was living in the Rocky Mountains at the time. His next car was a 2004 Toyota Celica that had minor modifications. The last car he did before modifying the R8 was a Honda S2000. The S2000 was turbo charged and very well put together pushing out 523hp/332tq.

The stock R8 which was in fairly good condition underwent its first upgrade very quickly. Brian knew the end goal so his first priority was creating the perfect handling and ride which he knew he would get from proven quality manufacturers, the stock suspension on the car didn’t last long once he bought the vehicle and a KW suspension kit provided him with his sought-after ride and handling capability. A few months later he arranged to have a full ABT body kit, known for their discreet but effective aerofoils fitted to the car. In Brian’s words, “The ABT Body kit is amazing as it adds the aggressive look the car needed. There’s not a lot of body kits out there that I like, I played around on Forza seeing how it would be built and I felt this one is the most fitting for it. The Carbon Fibre engine panels were added to go with the rest of the car. It just looked odd without it. The Carbon Fibre and the purposely chosen Matt Black colour on the car makes it look stunning”.

The wheels were chosen by Brian as he was lucky enough to have friends that work for Avant Garde and he knew that they would provide him with a custom pair of wheels to add to the styling of the car. Brian eventually opted for the Avant Garde F441 Wheels which were gave him the finished look he had in mind.

The wheels were complimented by the addition of AMG Gold Painted Calipers. A feature that really makes this car eye catching are the wonderful Pirelli Pzeros adorning the thin red detail on the wheel lip.

At around the same time Brian upgraded to a Frequency Intelligent exhaust set up after doing a lot of research and interestingly Brian quotes “it just sounds so mean, overall it sounds like something scientific is going on”. No surprise really as this Exhaust System technology offers cutting-edge intelligent ECU exhaust control valve, with an emphasis on the optimization of both acoustics and performance. When the valves are fully open for maximum flow and power, it creates an exotic tone and allows for high performance. When the valves are closed, volume is reduced for a more low-profile comfortable drive. With their latest technology, just one click on the remote control will setup any RPM mode or automatic mode. The automatic mode enables the system to detect the engine RPM to intelligently switch comfort/racing exhaust profiles. For the last performance upgrade Brian then had the Carbonio Air Intake added to achieve more horsepower plus he thought it looked awesome with the car. He did this with a Stage 1 PP performance Tune after the upgrades. We asked Brian what proportion of the work did he do himself. He replies, “I always take it to a shop, initially I was taking it to PP Performance, they’re the guys who built the Furious 7 cars. I recently started taking it to my friend’s shop Elite Autosports as they deal with more customization which was what I was looking for”. Very recently Brian also had an APR High Pressure Fuel Pump fitted after the stock pump started to fail.

The interior was the last thing to finish so he called on his friends at Braum Racing and they provided Brian with the racing seats and the harnesses of choice, he chose the Braum Elite Racing series and the red harnesses to add that classy touch. Finally, Brian then had Elite Autosports build a custom roll cage to complete the look he was after. Pushing out an impressive 376 horses is enough for Brian performance wise. He is aware of the cost of parts for the R8 and also whether fitting a turbo or supercharger is value for money. He indicates his next step will probably be putting the car on air. Its good to know that we in the UK are not the only country that has adopted the speed bump mentality. The very reason Brian is getting air ride fitted is due to the volume of speed bumps in Abu Dhabi.

So, if any readers are visiting Abu Dhabi and are lucky enough to see the amiable Brian driving around in his 2008 Matte Black R8 with full body kit be sure to shout out…Hey Hawaiian how’s it going?! We are sure he would welcome the chat.

Are you a member of any club? 9th Degree Car Club

Thanks: Onie and Essa from Elite Autosports, Roman from PP Performance, Alex Kings from Tuner Goods, Brooke from Braum Racing 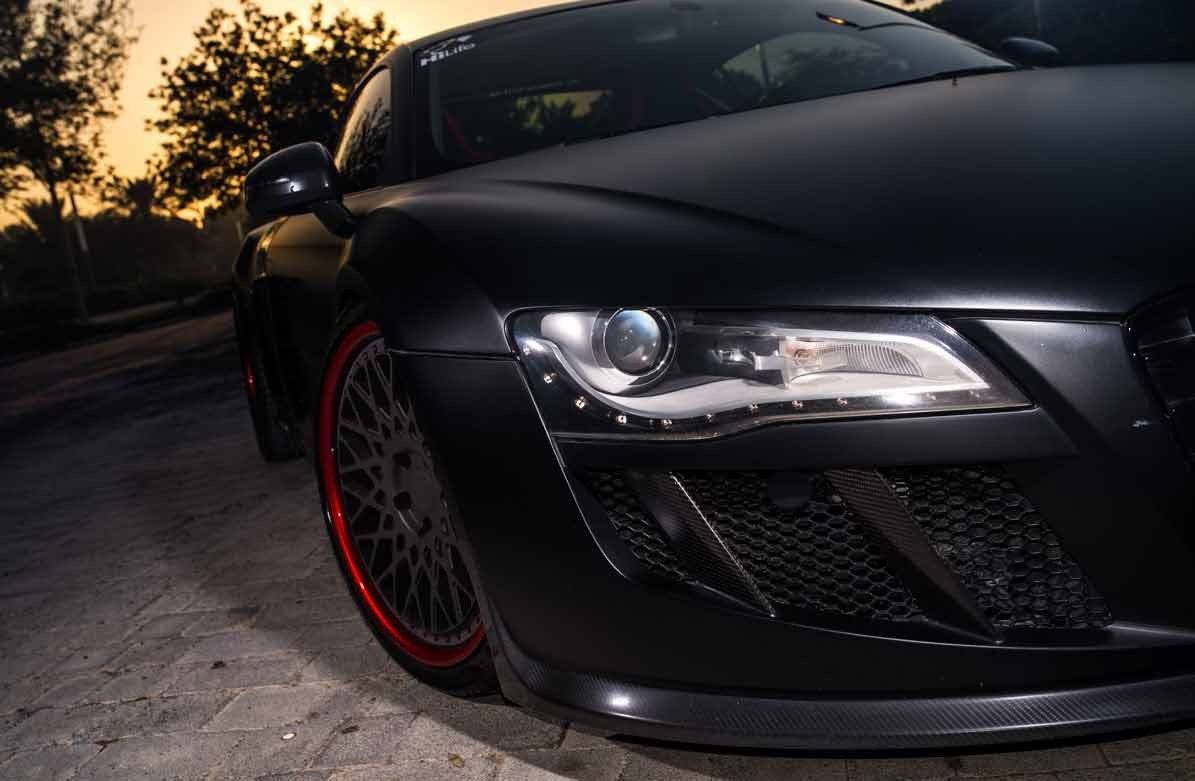 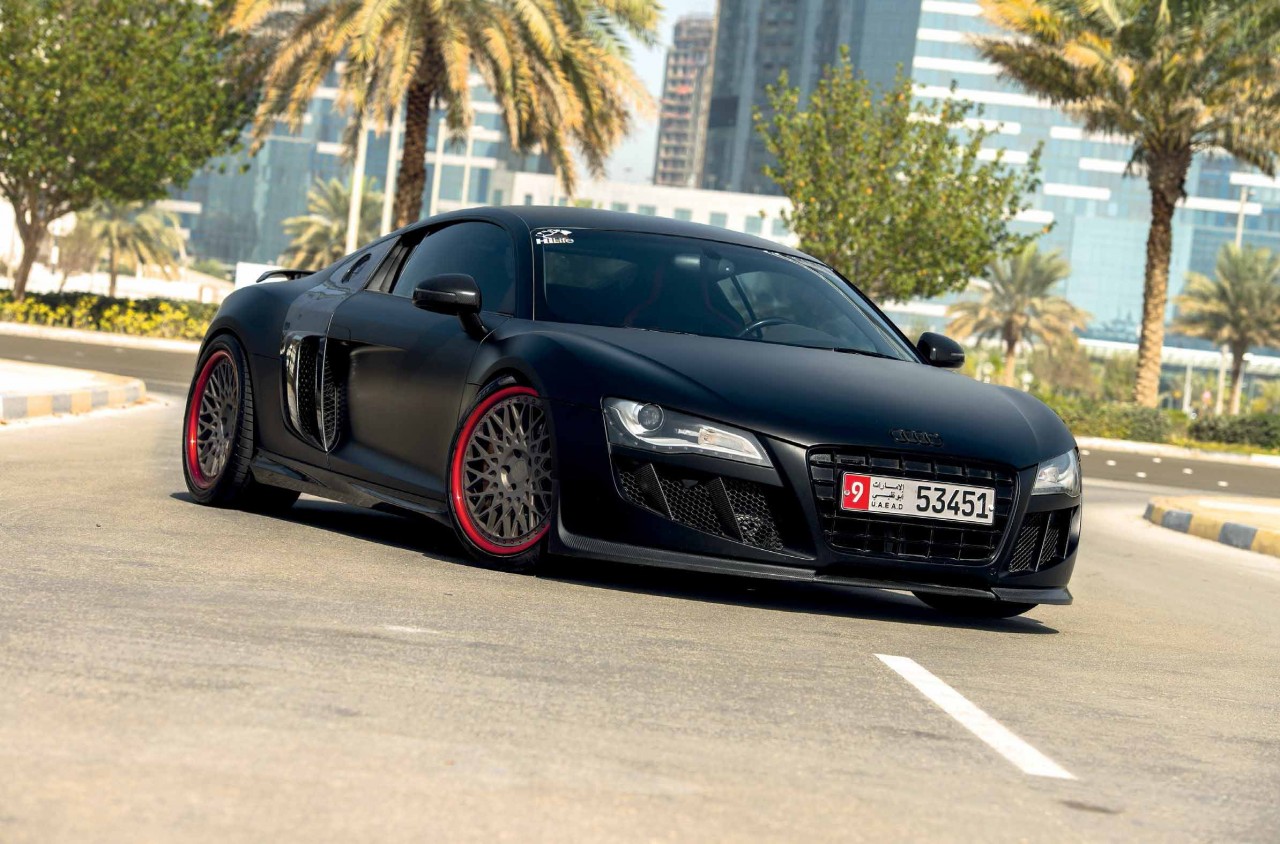 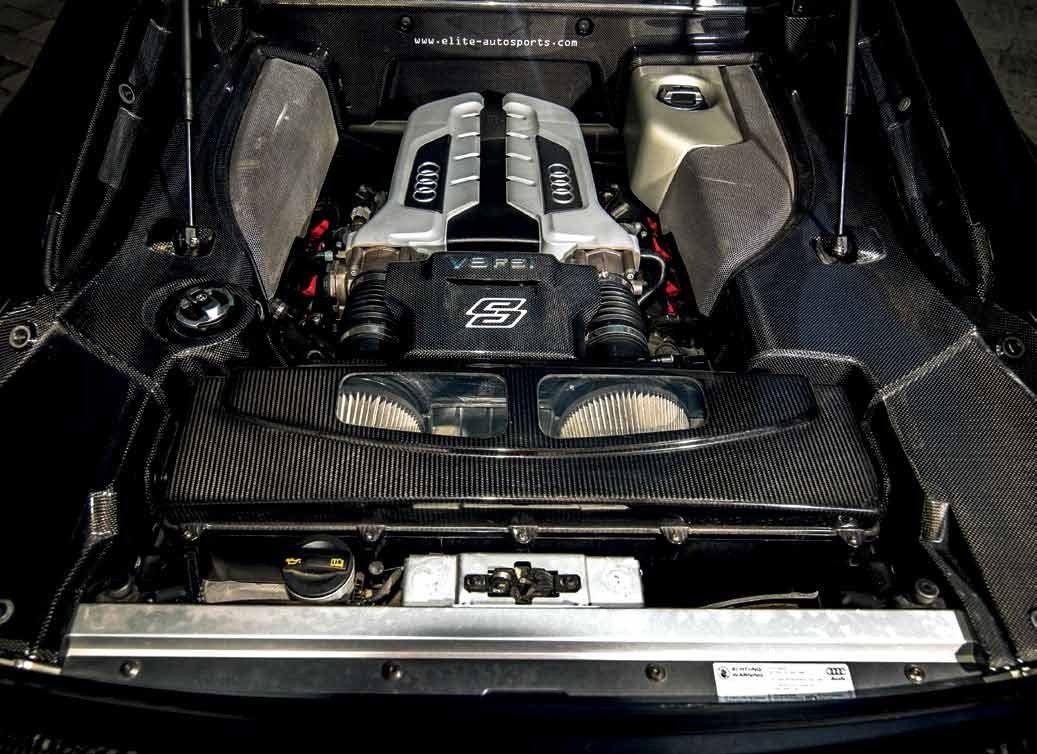 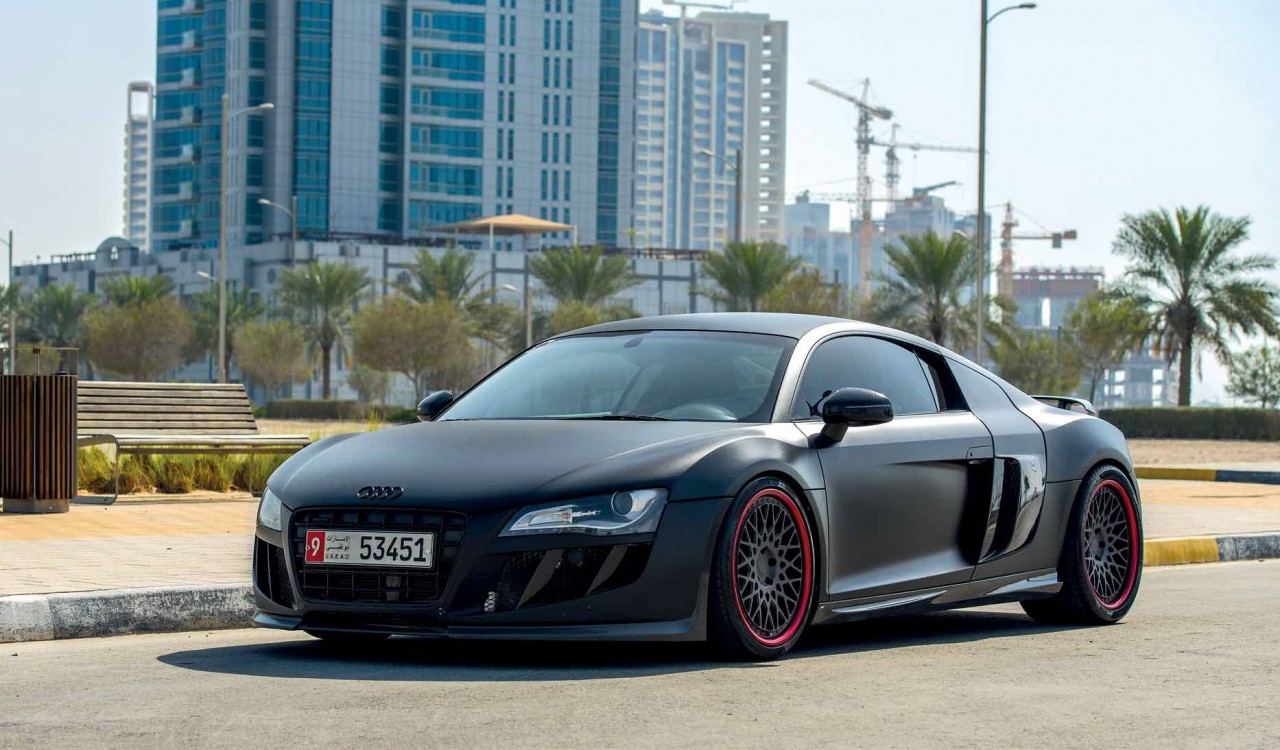 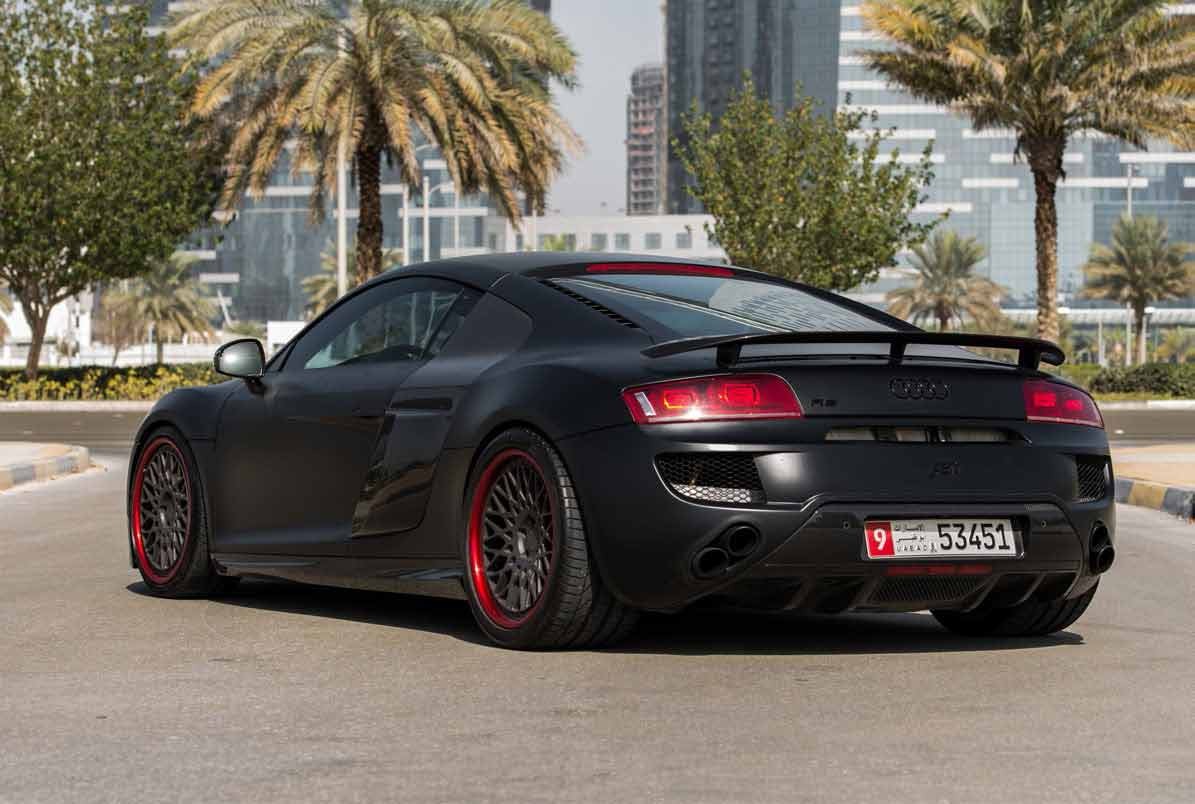 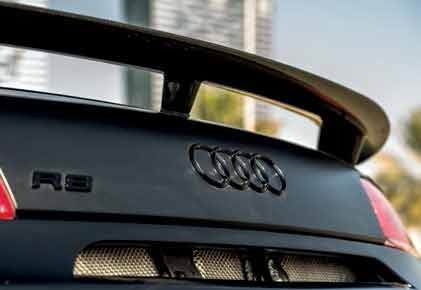 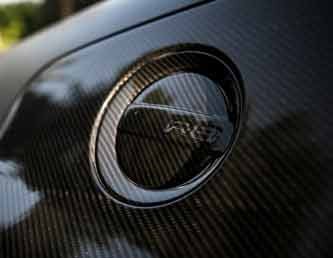 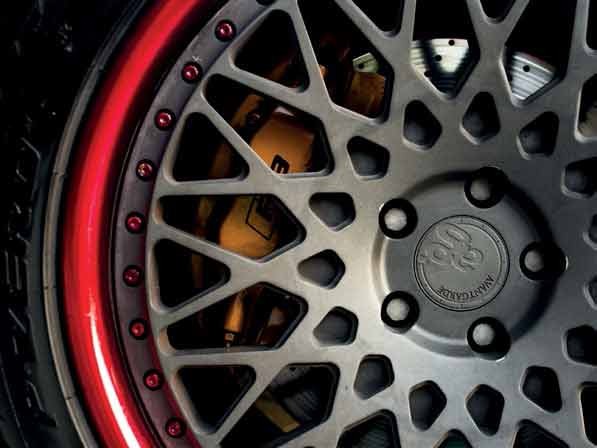 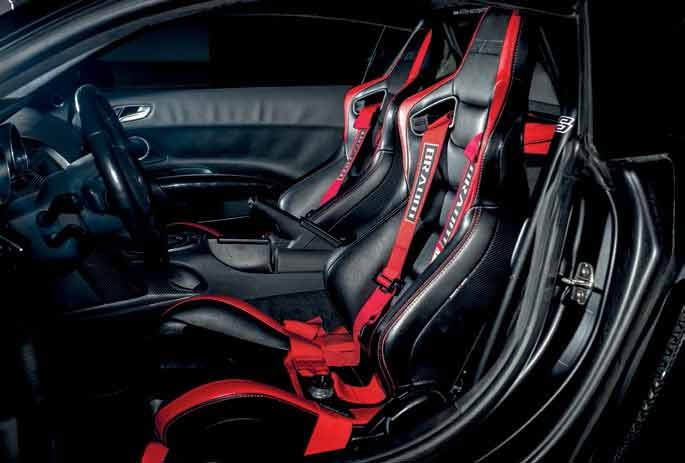 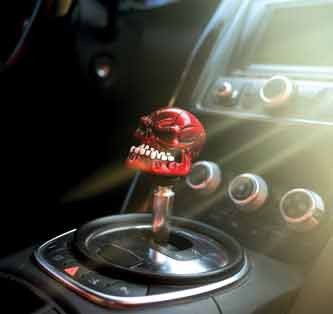 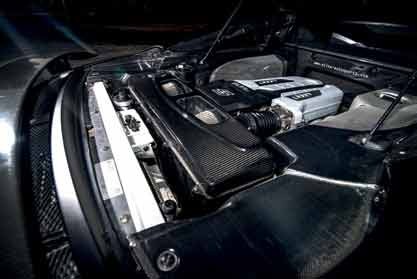 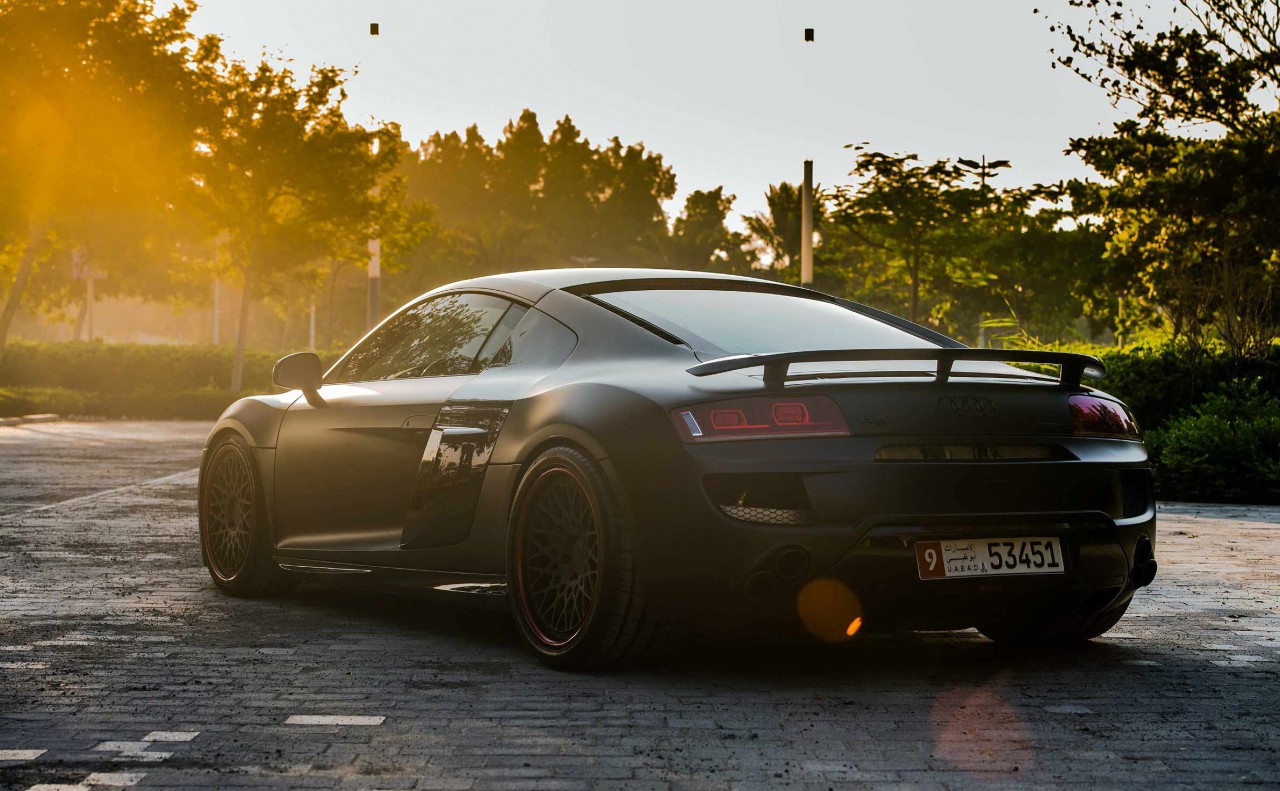 The R8 is probably the most reliable super car out there Left: Avant Garde F441 Wheels Above and below: R8 V8 4.2 FSI quattro with PP Performance Stage 1 tune. Above ABT Carbon Fibre Body Kit Below: Braum Elite Series Racing Seats.

“it just sounds so mean”