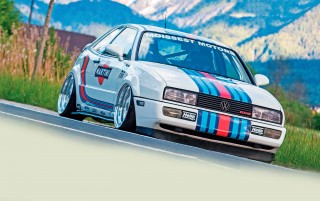 Race liveries have been quite common over the past couple of years, but what’s your all time favourite? We can take a pretty good guess which Mario Kößner’s is! Words & photos: Tony Matthews.

No story that features a Martini Racing styled VW can be started without the cliché 007 line of ‘Shaken not stirred’, right (if you say so – Ed)? And the reason that we are starting this VW Corrado’s journey from stock purchase of 1500Euros, to being covered in the legendary iconic racing colours, goes back to the Martini Vermouth alcoholic beverage. Why? Well, because my wife loves this vintage fruity pallet warmer and I got to find out some interesting facts you may have not known about it (were are you going with this? – Ed). So, let me begin to bring the knowledge, which could help you in your next pub quiz.

First off, James Bond’s advice to have it shaken and not stirred is totally wrong. To experience the perfect Martini, you need to stir it to ensure it gives a velvety and well blended taste, shaking it leads to over-dilution and small shards of broken ice. 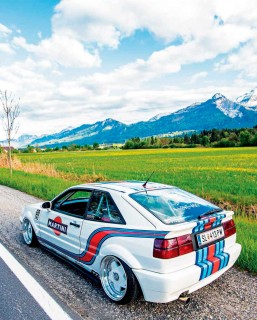 Now, like most classic cocktails, the Martini has murky origins. Some claim it was invented in Martinez, California, others see it traced back to the Italian Vermouth brand and others to back to bartenders in New York or San Francisco.

And last on the facts is that you can order a Martini for a whopping £50,000! Yes, you read that correctly, which was created by a Scottish distillery. It’s not covered in gold or diamonds, but it comes with a trip of a lifetime holiday that takes cocktail connoisseurs to some of the location where the botanicals that flavour the gin are grown. Here end of today's lesson!

For me, however, I’m more of rum kind of guy and prefer that Martini brand covering some of the world’s most iconic racing machines, from the likes of the Lancia Delta HF Integrale to the Porsche 917, as does Mario the owner of this Corrado G60. We met Mario at the local car meet at last year’s Worthersee event in Austria and his car drew in a massive crowd, so we had to take a closer look and chat with the owner.

Ever since he could walk and finger point out cars, Mario always had a love for all things on four wheels and it was at the age of 15, that he started an apprenticeship as a car painter. Mario had always been into cars especially of the VW kind and with his friends, he would spend many weekends tuning them up: "I remember the days when the biggest wheels we would bolt on to our cars were 7x15” and affording coilovers was like investing in air ride suspension today… as for most, it was a very expensive modification."

When he finally finished his apprenticeship, he got a full-time position working for a local Porsche dealership painting cars and it was around this time, in 2004, when he purchased his first VW Corrado. He had a soft spot for this Veedub as he loved the styling, which was different to all the Golfs that were on the road and Mario likes to be different. He kept this Corrado pretty stock as a daily run around.

A year later, he found a Corrado VR6 for sale and decided to buy it, so the Corrado bug was well and truly in his veins. Then as life moved on, with a wife, house and now a child on the way, it was time to rethink his life and so he sold all possessions including the VW Corrados, to move into a bigger house.

For a while, they would drive around in a diesel station wagon where they now lived at Lake Wörthersee and it didn’t take long for Mario to start looking on the Internet to find an accident damaged Corrado G60 for sale at a cheap price.

Over the next few months, Mario worked on restoring it to make it road worthy again.

It was then, having a conversation with his long time friend, who came to see him at his new house, that they should build a Corrado together, as he was impressed with Mario’s work on the body. So two weeks later another G60 was purchased, Mario’s friend Markus said: "I'll take care of the engine and you can handle the body!"

Over the next two years what started as a fun project between Mario and Markus, eventually got them to open up a garage catering to customising VW Corrados, which they call ‘Corrado Garage’. The garage would build a couple of Corrados per year to the highest standard, which they would sell after show season and at the same time, also sell old and new parts. Business started to go very well for them and is still going strong today, and in 2020 they will celebrate their 15th year anniversary. As a side note, this isn’t Mario’s full time job, as he is still a painter at Porsche in Salzburg.

They would go all out to build the best VW Corrados around, with a fusion of self made wheels, carbon fibre, smooth bodywork, rebuilt engines and so on. Their Corrados would be seen every where in Europe, with many magazine features and newspaper articles.

For years Mario always wanted a US-spec G60 Corrado in white, as most of his builds would be in red. It was on a trip in Spa in 2017 where, whilst surfi ng the Internet on his mobile phone, he saw a dismantled US-spec G60 in white for sale. He was super excited and three weeks later, Mario and Markus drove 600km to purchase it for just 1500Euros. However, it wasn’t in the condition they expected as there was water and moss everywhere inside. Luckily the body and engine weren’t that bad and so they saw past the moss and decided to buy it. 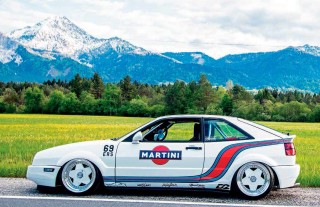 The guys had several months work ahead of them to rebuild the entire Corrado. Their aim was, as always, to keep the original lines of the car, so no major bodywork enhancements and a fully rebuilt the engine with 235bhp. The car remained this way for one show season, but Mario had more plans and wanted the car to make more of an impact when people saw it. We can see where this was going! Then it came to him ‘Martini Racing’ he said to Markus. Those iconic graphics will make it pop so much and everyone would recognises the racing graphics everywhere.

So they got in contact with Martini Design, who did an amazing job with the graphics, applying them front to back, including the sides of the car. As the graphics were being applied, Mario and Markus got busy sourcing all the remaining parts, to make this their ultimate Corrado project to date. Exterior wise, they added subtle parts such as the Hella caps on the front fogs, S2 mirrors, custom sideskirts by Mario and red rear lights.

This time, instead of coilovers they wanted to drop the car much lower and purchased D2 air suspension with two compressors and carried out a custom boot install. They then added three-piece 15” Borbet Interspersed wheels with BBS hardware inside and outside, which they had upsized to 9x17 front and rear. Finally they painted the centres to match the white of the car, which adds a special touch in my eyes to the overall look.

As for the interior, Mario and Markus built a full on custom roll-cage, which extends into the boot area, bolted in some leather Recaro seats, had the rear seats removed and a Snap Off OMP steering wheel to replace the original one. With such subtle customisations, parts and the right theme, you truly pull off the same type of impact acieved with a project that most likely costs three times as much. Mario and Markus clealry have the right format for producing a storted Corrado or two! 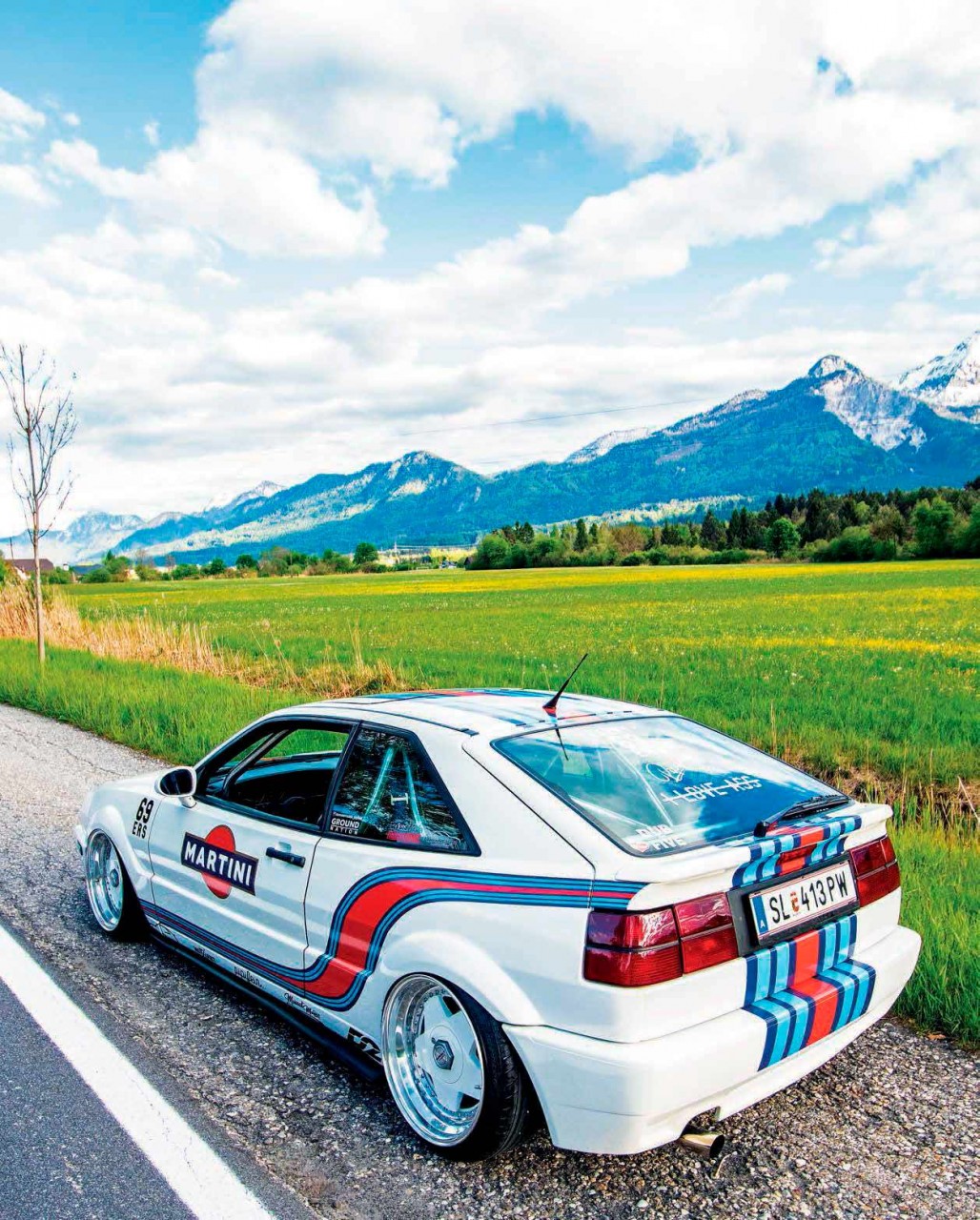 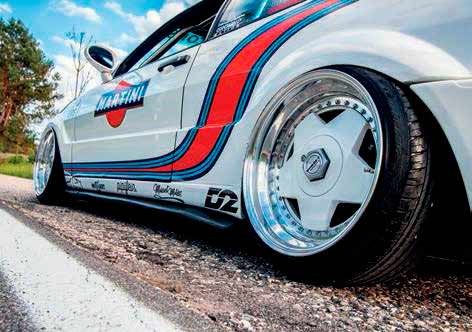 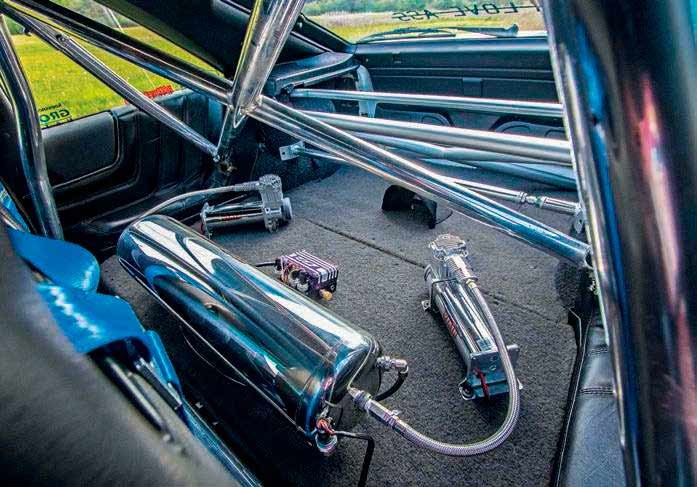 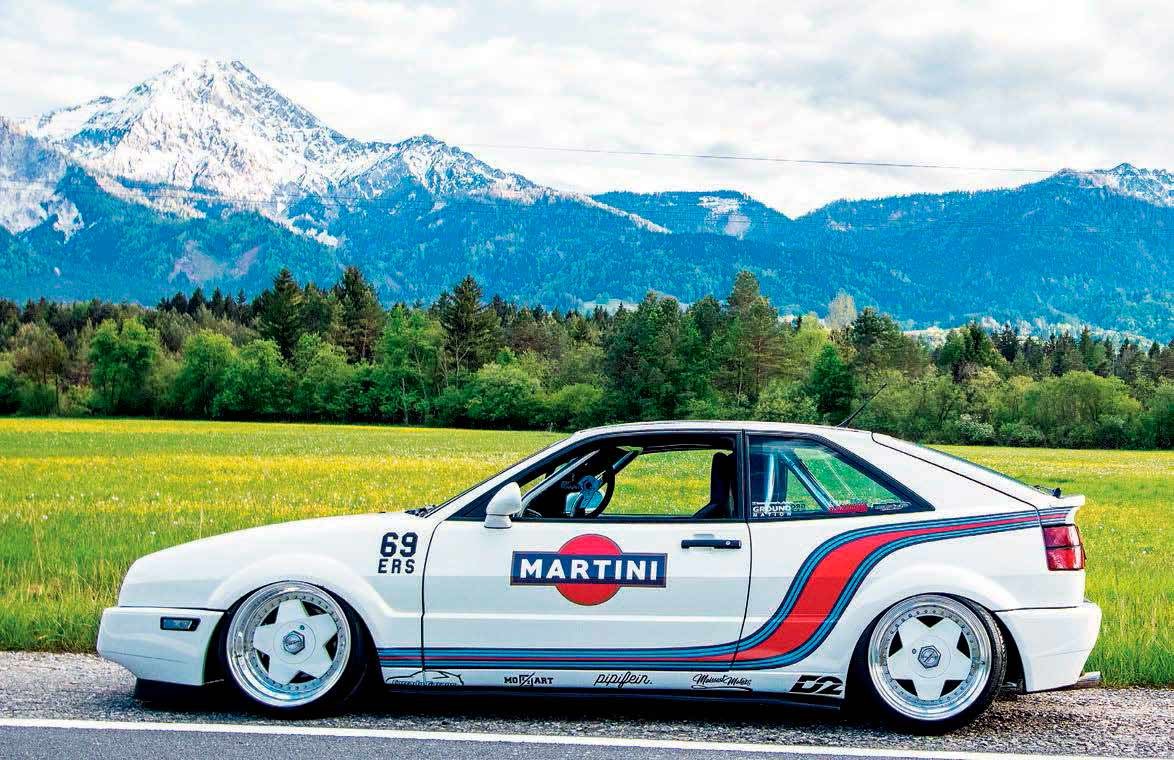 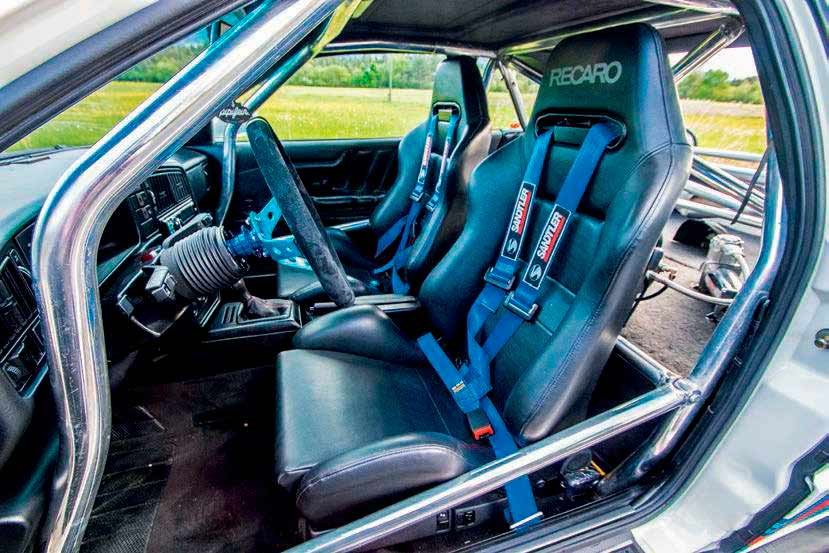 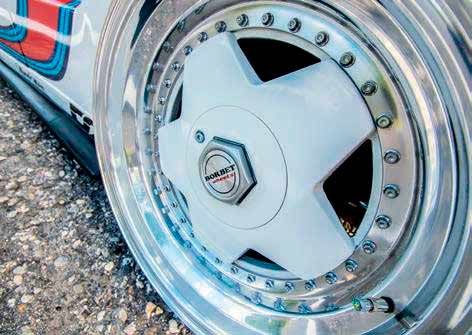 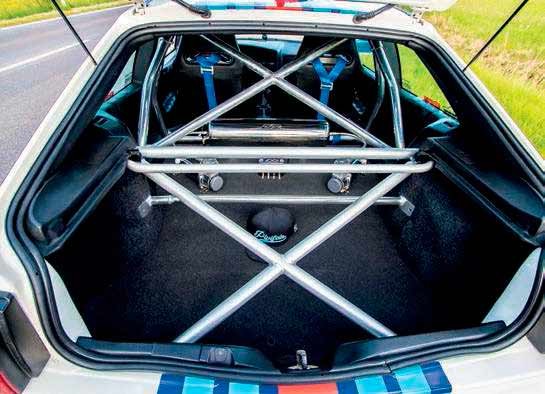 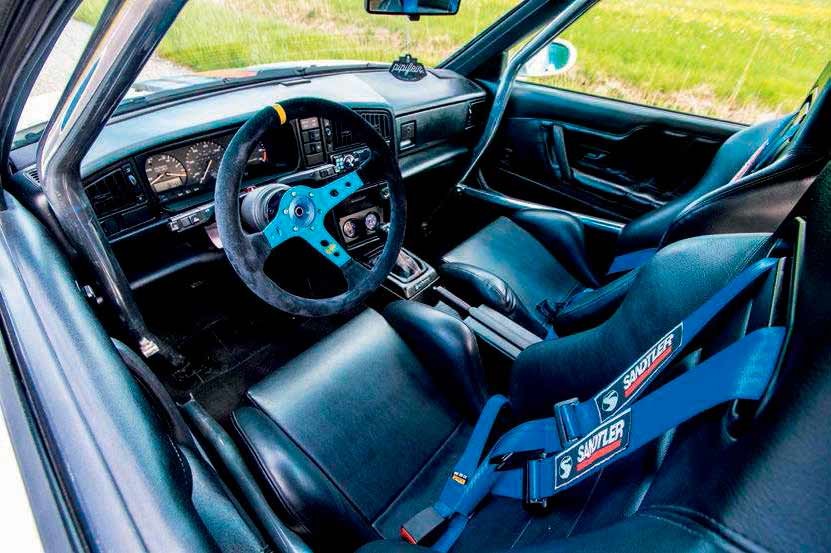 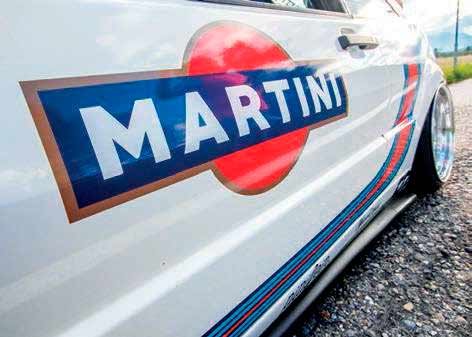 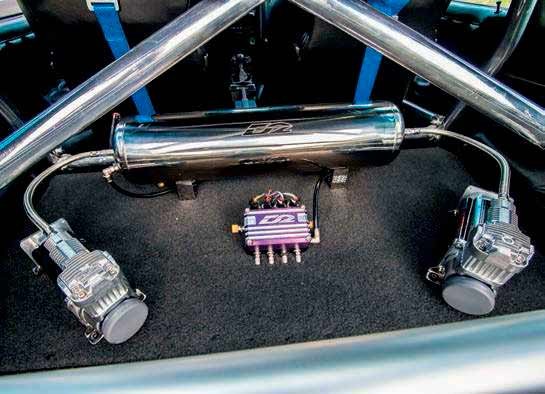 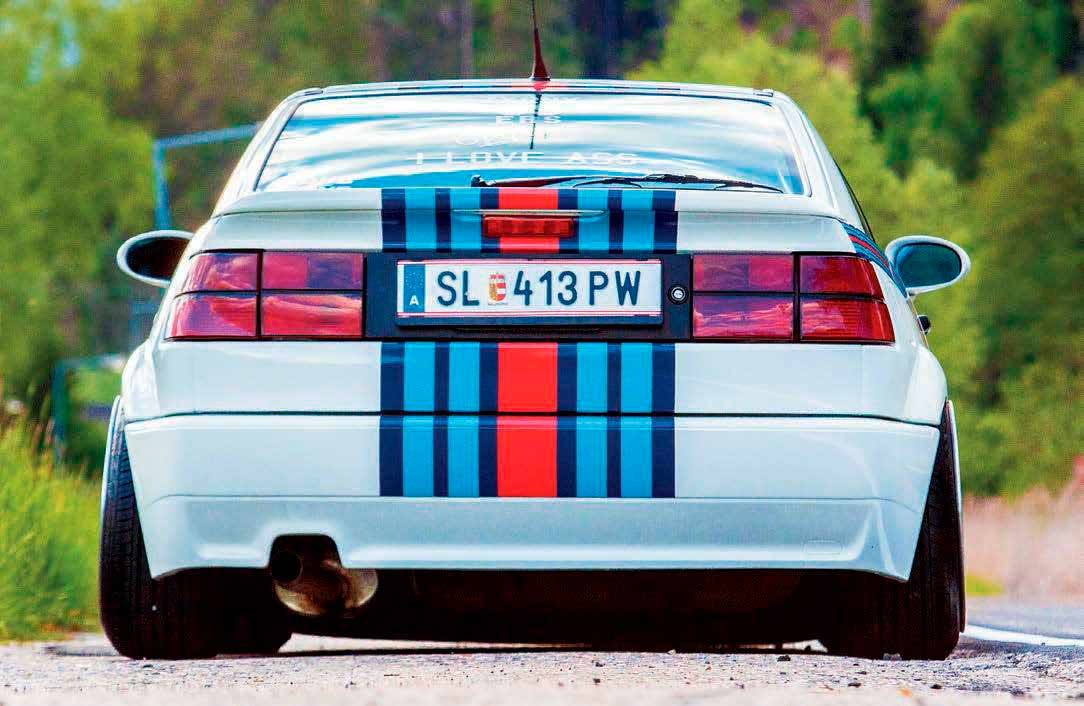 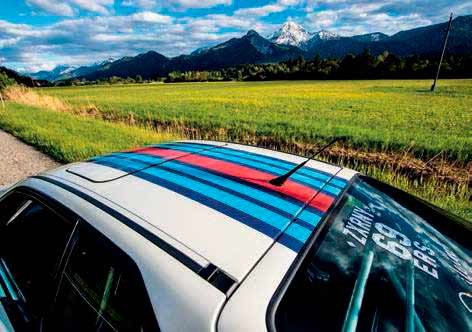 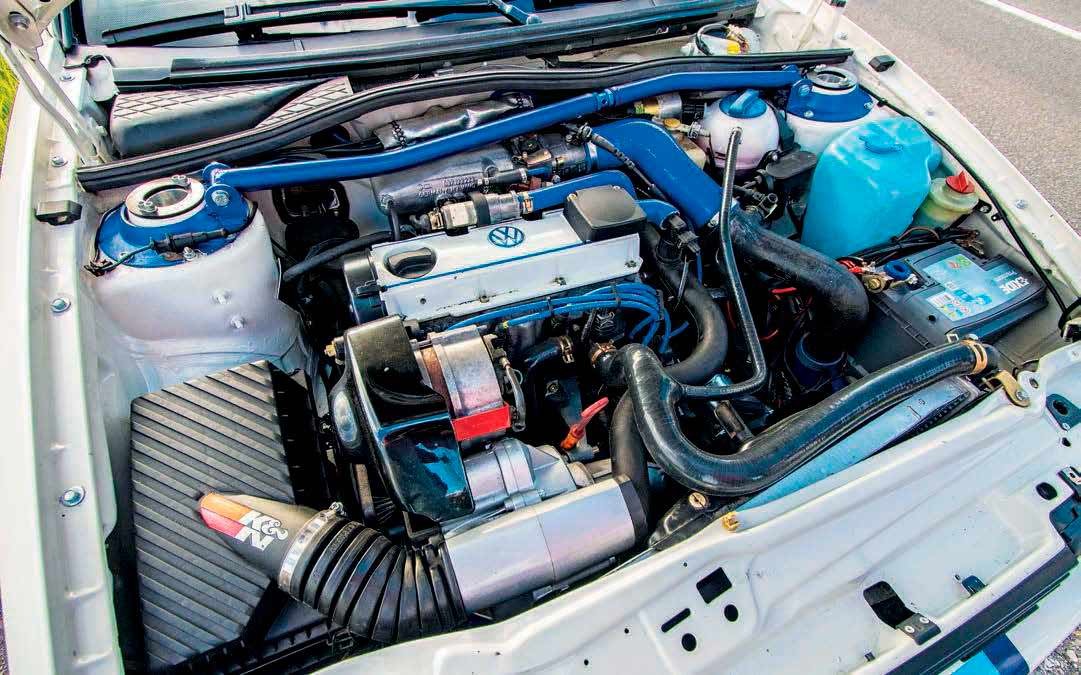 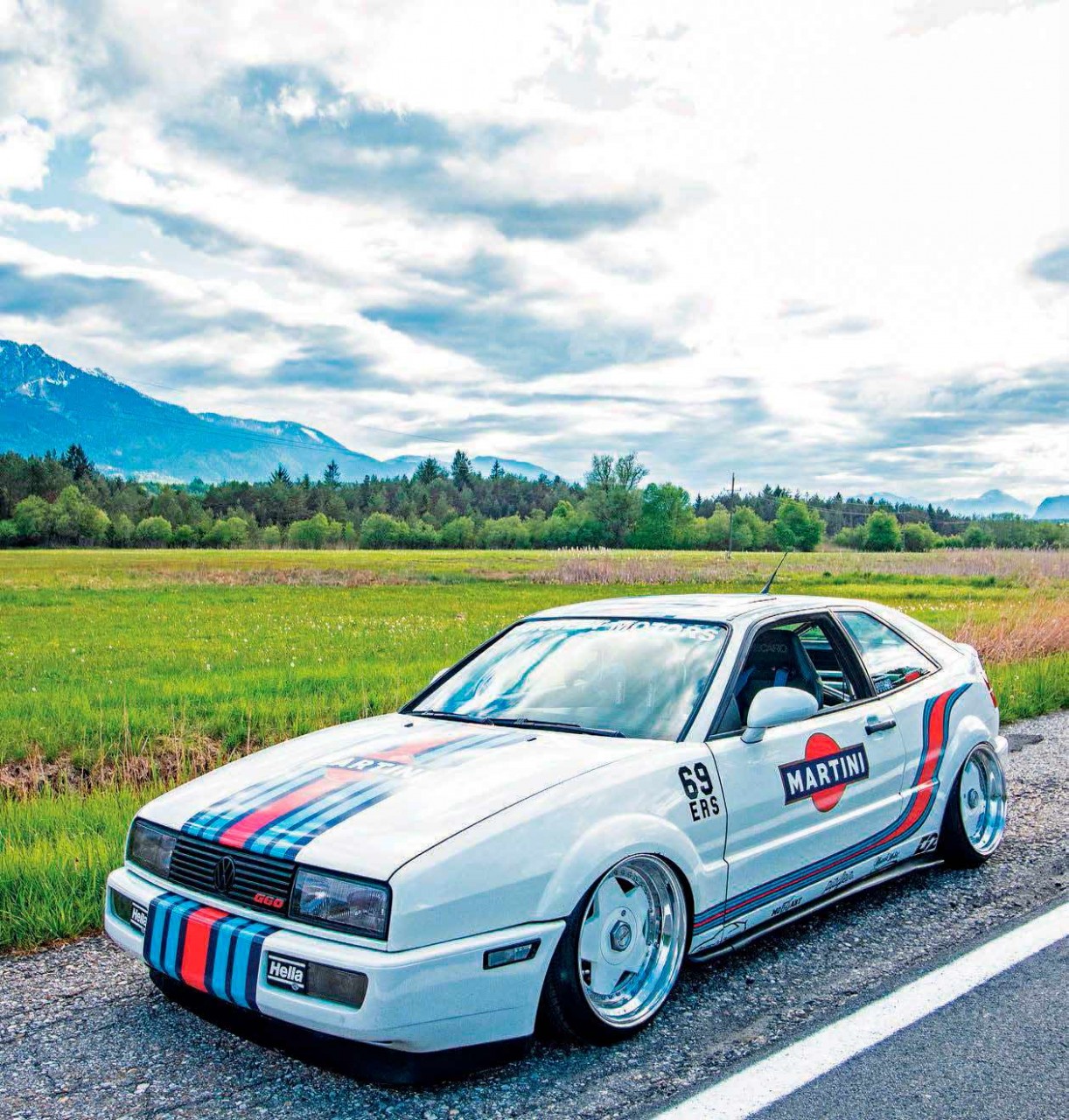 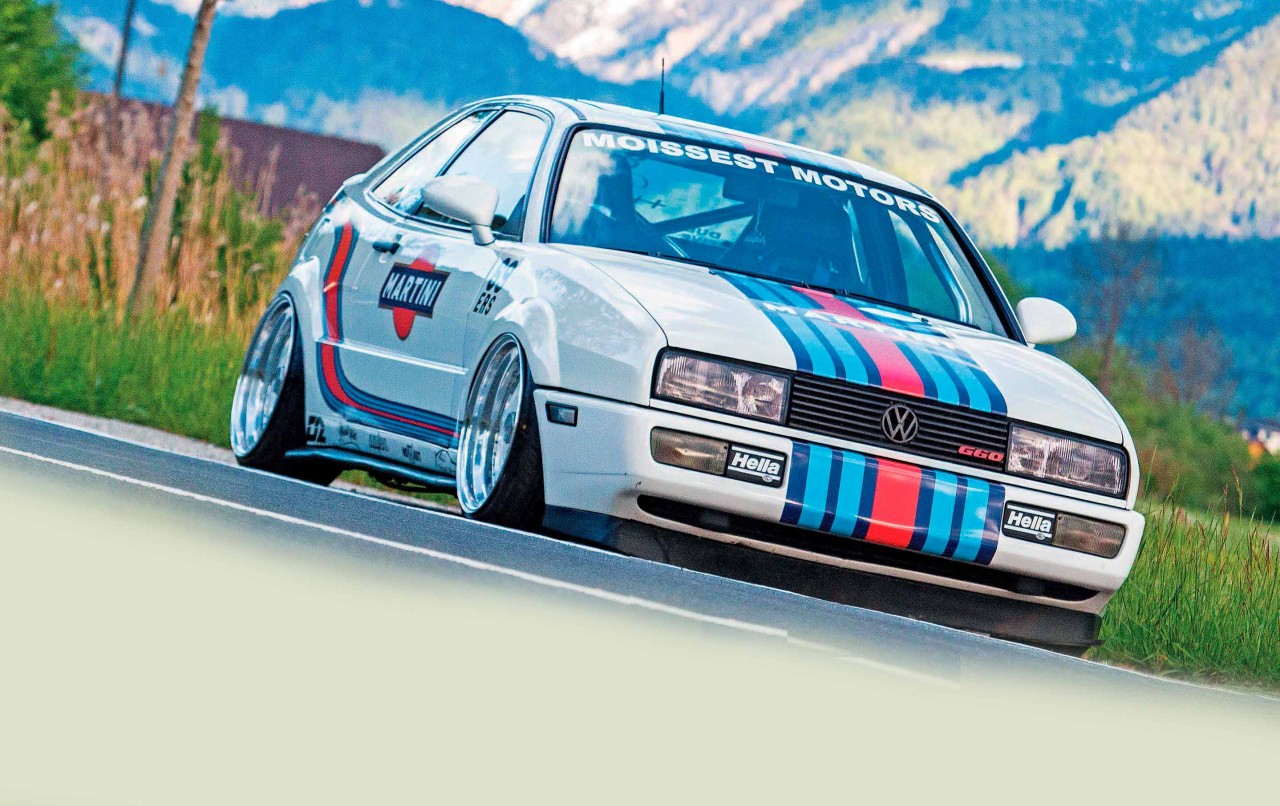 Classic Martini livery really seems to work on iconic coupe shape. Classic 15" Borbet As were stepped up to 17" by the guys…. While Mario took care of the body, his friend Markus focussed on the engine. The interior has an almost 90s vibe to it, but in a good way!

SHOUT: A big thank you to Berger Manuel, who is always on the road with me, be it picking up a car and/ or participating in projects. He also helped me extend the cage and install it in the air suspension. My other big thanks, of course, go to my family, who are always behind me, and to Gruber Markus, Berger Manuel, Pfaffeneder Markus and Fürlinger Sepperl

Whether you’re an amateur or a pro, if you spend any time on track driving close to the limit then accidents will happen, but it’s a darn sight safer than doing it on the road!

It’s funny how, generally, our scene has always been split into two camps; those who favour ‘show’ and others who long for more ‘go’! Of course, you occasionally get certain individuals who are interested in both and one such person is Dutchman, Marco Veldhuis (owner of the blue Mk1 pictured here). We actually featured Marco’s previous stunning 16v G60-powered Mk2 way back in PVW 9/01, and looking back now the gleaming black Golf, with it’s smooth engine bay and tuned 16v G60 really did offer the best of both worlds. While he still owns said Mk2 – he actually used it to tow his Mk1 down to Austria for Worthersee where we took photos for our feature (I kid you not) – after visiting the Nurburgring shortly after our feature, Marco and his friends soon became slightly addicted with the Green Hell! You can read all about the track ready Mk1 he built to take on the German circuit on page 24. There were many highs, a couple of lows, but generally Marco hasn’t looked back. I think one lesson we learnt from the article is that in this day and age, where power, speed and generally having any sort of fun driving on the public roads is frowned upon, you’re actually best letting off any sort of steam you may have on one of the many awesome circuits we have here in Europe. It’s safe, for the best part, and if you do have an altercation then you’ll be surround by people trained at ensuring your safety.

While we have been making a conscious effort to get more of an even balance between show and go cars recently, we have let the side down a little this issue with mostly show worthy feature cars. That being said, both Ady Oliver’s 1.8T Mk2 and Sebastian Berndt’s Mk1 Scirocco, running a 2.0 16v on ITBs are hardly slouches, despite both being show stoppers in their own rights. As for Toby Green’s Caddy van, he actually uses the thing for work. Amazing!

Especially when it is referred to a g60 car, having the g60 engine, a dream motor, in terms of simplicity, durability, performance.

The rest of the car is fine but it misses some things, (which are present at the best Corrado g60 of all eras): the OEM air suspension, (for the rear), the climatronic, and, the most important of all, the Syncro permanent 4wd.

So here is the best Corrado g60, of all eras, but the four doors edition:

As for the hp of the engine, (which has 300000 km unopened, no repairs at all), chipped properly and with the proper spark plugs and DIY plasma ignition, without modifications, must be more than 200 hp, (at a zero emissions project): https://1.bp.blogspot.com/-qlmW3IwENr8/XZ8EuKn2OeI/AAAAAAAAEz0/7zDkQrg9iJUhOxyExIBrxadocTFvHW8ewCLcBGAsYHQ/s1600/IMG_20191013_204406%2B2.jpg

Thank you for your time.

Hi Thanks, reupload your images please in our comment form)

Tony FOLKS Matthews
There are no comments posted here yet