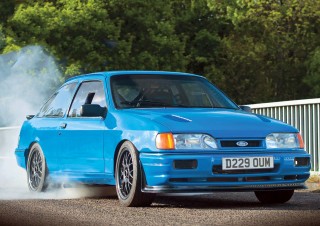 A crazy blend of V8 power, stock car racer inspiration, and lots of tyre smoke… it’s a Sierra but not as we know it! Words by Ben Hosking. Photos by Ade Brannan.

Not everyone gets it”, shrugs Richard Beazer as we squint at his dazzling blue Sierra in the Kent sunshine. “Some purists walk off at shows shaking their heads, some ask why I’ve chopped up a Cosworth to fit Sapphire lights, and some don’t take much notice until I start it up and leave the show… but at that point it always brings a massive smile to everyone’s faces, and my smile is the biggest of all!” 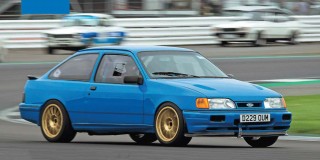 Most savvy Fast Ford readers will be able to spot that this project didn’t start off life as a Cosworth, or even as a Mk1 three-door Sierra. No, this car actually started out as a German, left hand drive, base model Mk2, with those Mk2 lights from the factory, magenta paint and a 1.6-litre engine.

Richard’s friend Danny previously owned the car, and converted it to right hand drive after it was imported into the UK. He’d also started some of the mods you see here. “Danny had a vision for it,” continues Richard, “he was going to put an I4 RS2000 engine in and do track days, but he got too excited about his next project so started dropping hints at me to buy it”. Eventually the temptation (aka peer pressure!) got too much for Richard, especially after Danny had the proper roll-cage installed and the car painted in eye-popping VW Cornflower Blue. “It was still on standard running gear at that point,” explains Richard, “but it was a really good base to build on and it looked unique, so I gave in!” 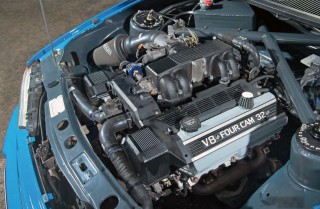 The plan was to build a general purpose hooning/track day/Santa Pod/show car, but like most of us, a mortgage, family life and kids meant a mega power YB build was out of budget. “I didn’t fancy doing that anyway”, explains Richard, “I’ve owned Cosworths, but it isn’t a Cosworth so why try to replicate one?” From years of being inspired by 1970’s Fords and oval racing, a plan started to form around a minimalistic Lightning Rod style build with a naturally aspirated engine, light weight and reliable parts. Cue the legendary Toyota 1UZ-FE. “My friend Zac had a Toyota V8 powered Sierra” says Richard, “his conversion was pretty easy and it never broke even when taking a serious beating, so I decided to go the same way”. Conveniently, another friend had a Sierra estate for sale with the engine and box already in, so Richard bought the whole car for £2000 and set to work on the transplant. Being a mechanic, he was able to carry it out with the help of a few friends, and the mechanical side was all pretty straightforward. “We didn’t have to do anything to the engine bay or the gearbox tunnel, but we had to notch the sump to clear the steering rack”, he explains, “we also had to fit a Mk1 Sierra crossmember as the steering rack hit the Mk2 one, but other than that it wasn’t hard”.

The biggest issue came from the electrics and management. “Electrics aren’t my thing,” he laughs, “I got it half running on a standard ECU but it wasn’t right, and we eventually traced it back to the standard air flow meter.” A call into a Toyota dealership later, and the thought of shelling out £400 for a new AFM was too much to bear, so his old pal Clint at BHP suggested they remove the AFM by fitting a Link ECU, and at the same time get rid of the original distributor ignition. “At the time it was the first one he’d done”, Richard explains, “now he does a plug and play kit – it made a huge difference; it runs smooth, revs to 8000rpm, makes more than enough power and with the recent lambda function, I can drive to Silverstone and back on £20 of fuel rather than drain the tank.”

‘A reliable, naturally aspirated 260bhp per tonne is not to be sniffed at, as a few wanna-be boy racers have found out to their loss on the road...’ 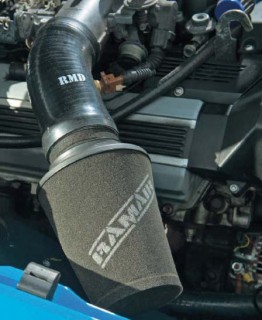 The engine bolts up to a bullet-proof BMW ZF gearbox, by way of a F1 Drift Moto adapter plate and flywheel. Nev at F1 Drift Moto has sold many of these over the years, and they’ve ended up in Volvo 340’s, Japanese cars, and pretty much everything in-between, so it’s a tried and tested kit. Everything else on the car is all Sierra stuff, including the rear beam – Richard started off with a 7in Sierra viscous diff “pumped up” by Bara Motorsport, and 9x17in rear wheels… but that didn’t last very long! “The very first time at Santa Pod, I launched off the line and sheared both driveshafts,” he laughs, “so I had to go back to the drawing board”. This meant reducing the grip/width of the tyres slightly to 225 section on 8in wheels, and fitting a plated diff, this time in the 7.5in variety and with a slightly longer 3.62:1 final drive compared to the previous 3.9:1. “The plated LSD made such a huge difference to the car’s handling, “enthuses Richard, “although it was a bit scary when I first drove it. I was like, ‘what’s falling off the car?!’ as it’s quite noisy… the gearing is now much better for all-round driving, as we do a fair bit of motorway miles to and from shows.”

GAZ suspension and neat CapriSport front and rear brake kits complete the running gear, those gorgeous TSW Hockenheims requiring wheel spacers up front to ensure they don’t catch the 325mm discs. I remember when Hocks were the daddy wheel on three-doors and Sapphires, so I was a bit jealous to hear Richard paid just £200 for them before having them refurbished in a lovely gunmetal powder coat. They really do set the outside of the car off to a tee, and are complemented by a grey tinted set of Lexan windows all round. Inside, you can really see the Lightning Rod influence – the lack of a real dash, and the hot rod style dash pod is hard to miss, and the rest of it is pure authentic, organic, utilitarian race car. Even the heater matrix has been removed, being replaced with a new electric heated windscreen. As Richard says, “you should only fit what you need!” The by-product of all this minimalism is that the Sierra tips the scales at a really impressive 1000kg with a full tank of fuel.

A reliable, naturally aspirated 260bhp per tonne is not to be sniffed at, as a few wannabe boy racers have found out to their loss on the road. “A lad in a BMW 140i had a go with me,” smiles Richard, “by the end of it, he pulled over and shouted, ‘what the f*** is in that?’ I replied, ‘if you catch me next time, I’ll show you!’” The car has been driven to Santa Pod many times, been hammered, and been driven back without drama, posting a personal best ET of 13.5sec. It’s also done 20 track days without any issues... 20! We can’t say the same for Richard though - “The first time I gave the car a proper shakedown was also my first ever track day” he laughs, “I was bricking it, and my first time over Brands Hatch Paddock Hill bend was so sketchy, but the car was amazing.”

This Sierra might not be the fastest we’ve ever featured, it might not be the blingiest, but it’s such a capable all-rounder that is loads of fun, doesn’t break every five minutes, and hasn’t needed a remortgaged house to achieve. A proper throwback ‘built not bought’ project… we love it! 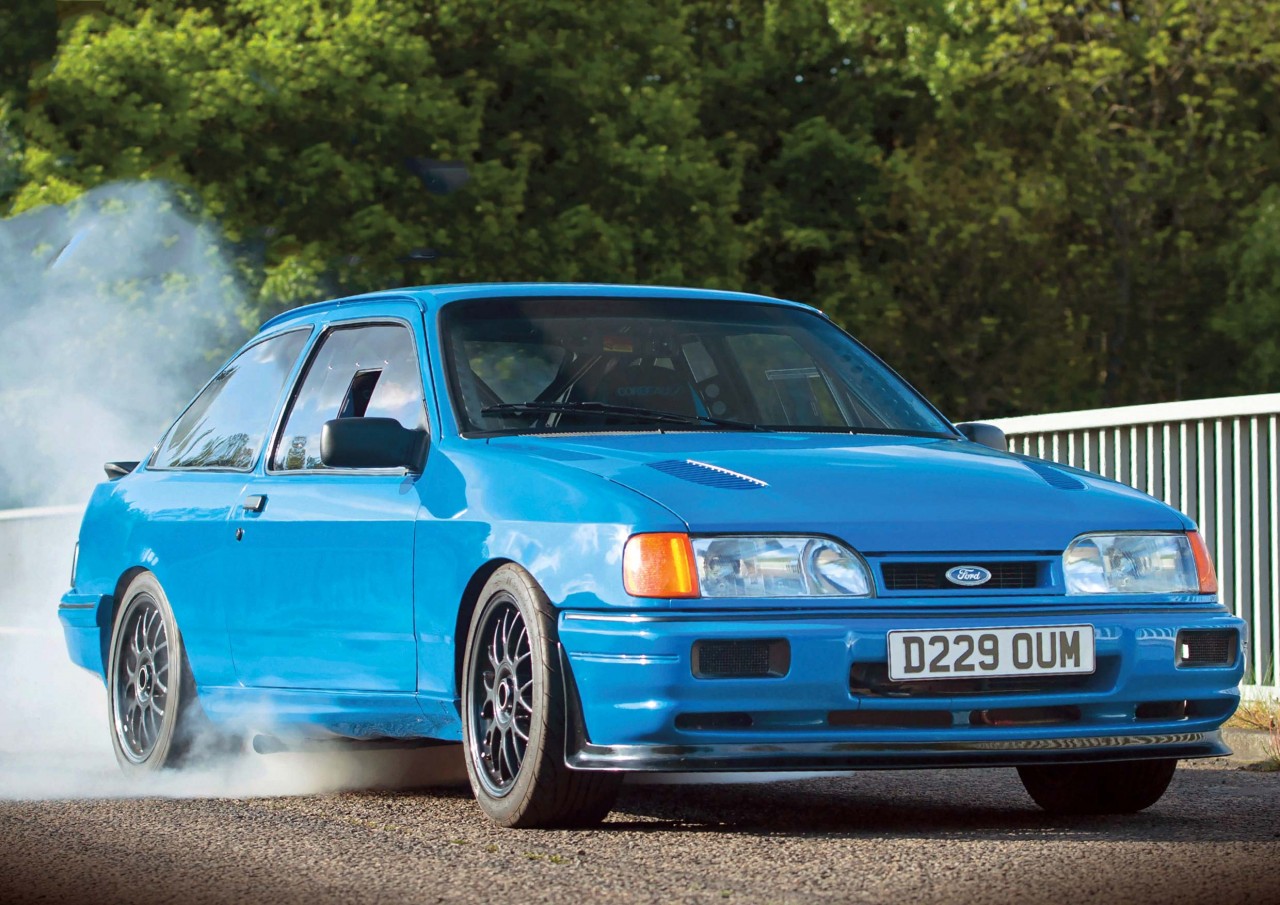 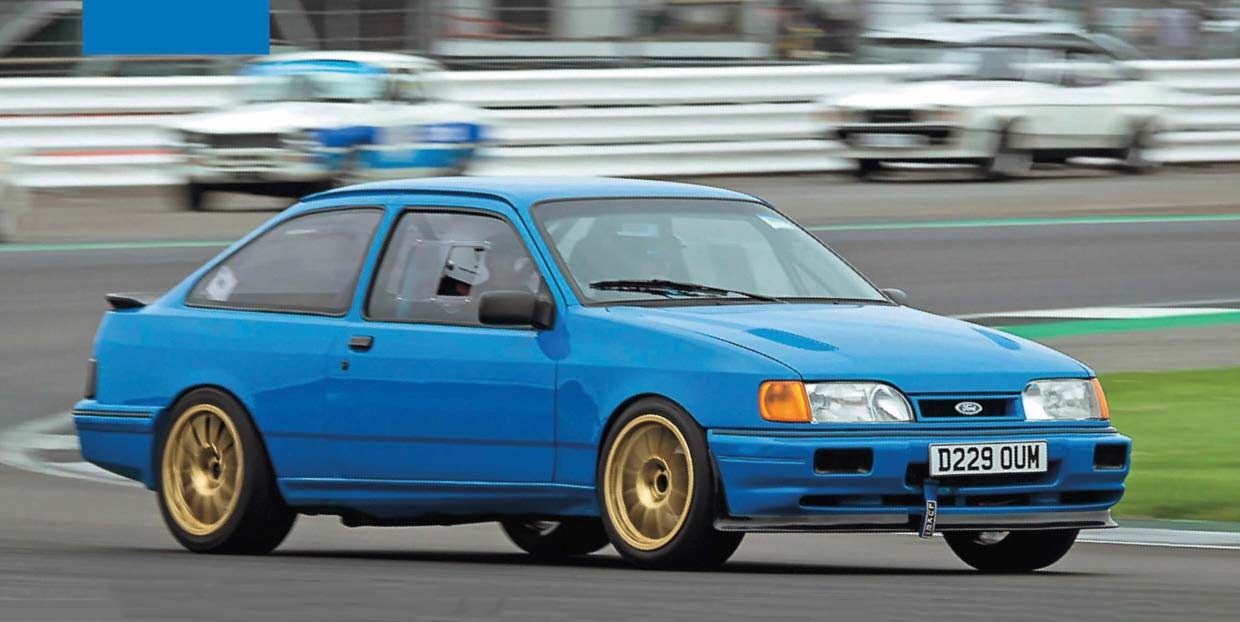 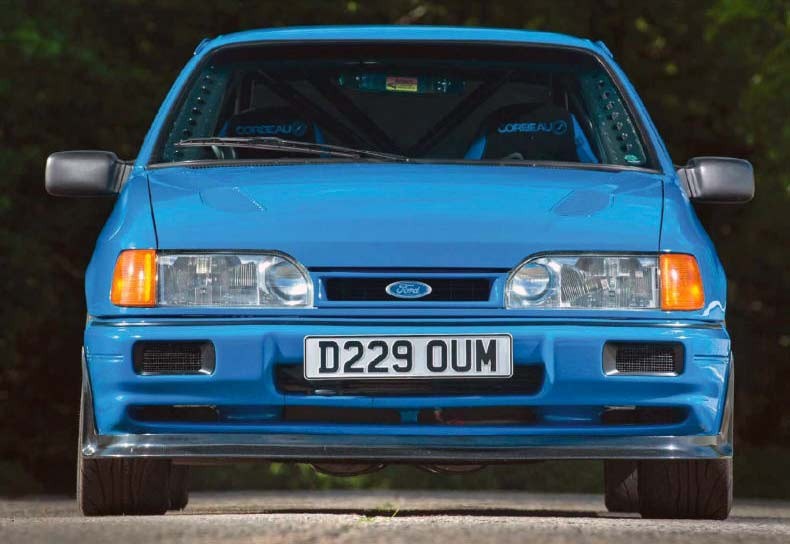 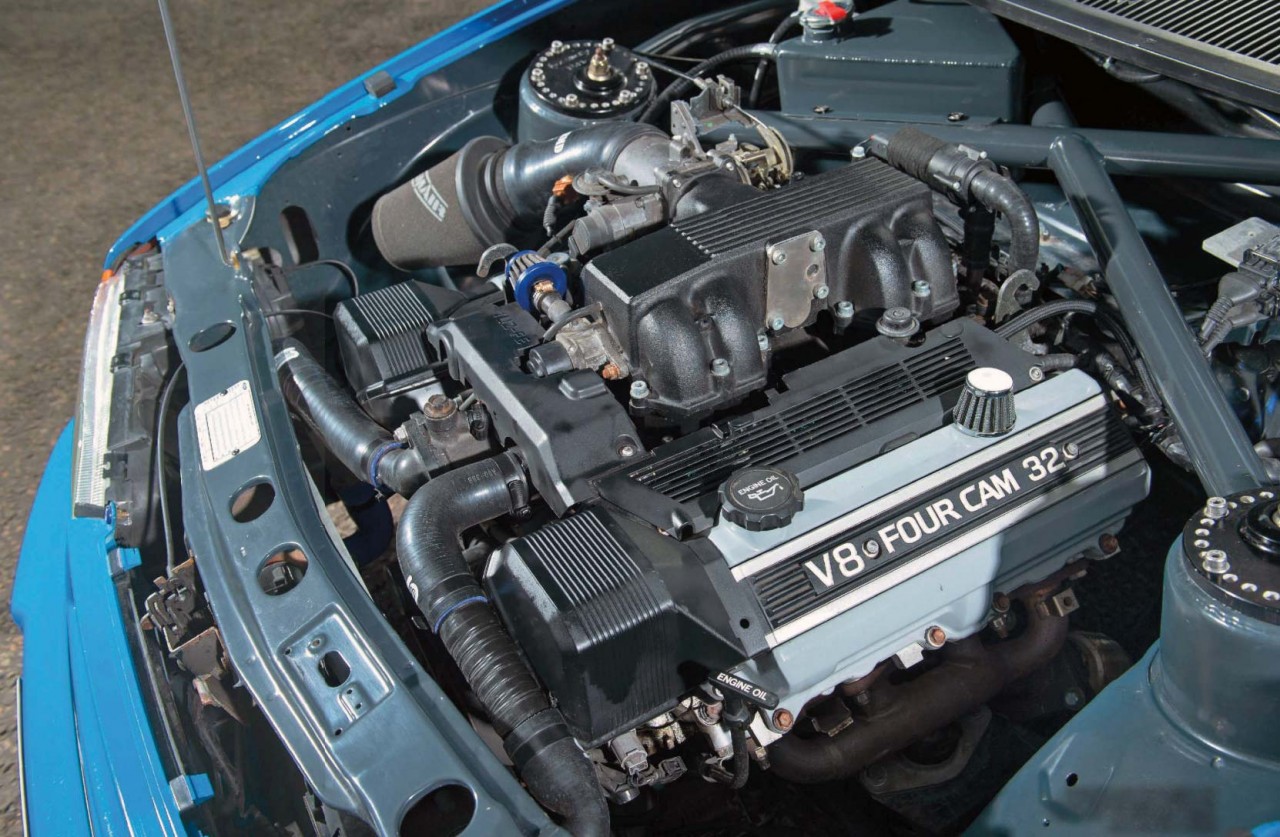 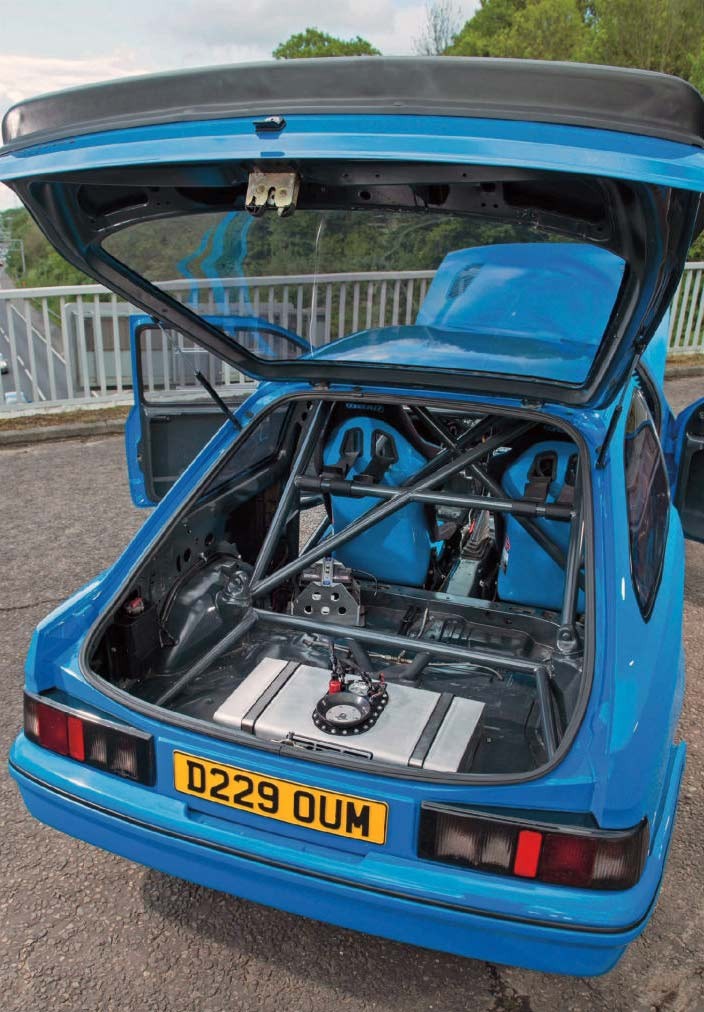 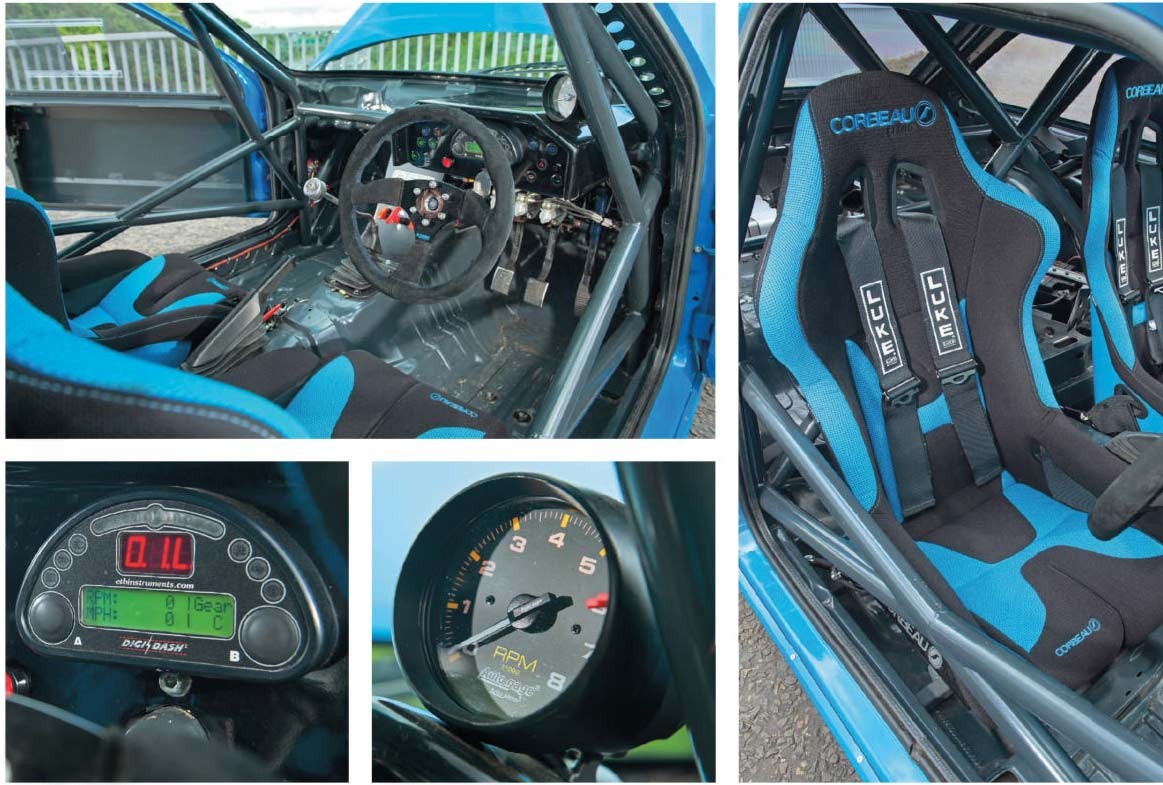 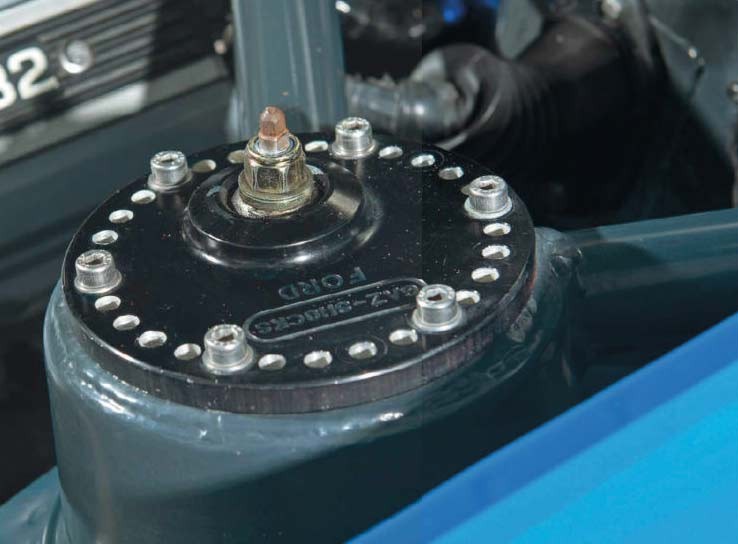 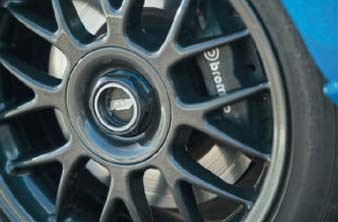 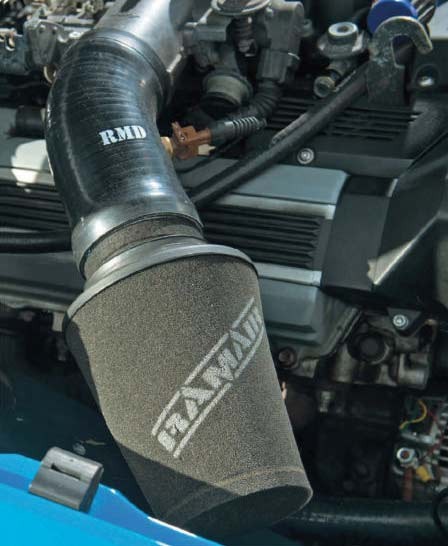 Pro Alloy fuel cell is neatly mounted where the spare wheel once lived. Wilwood bias pedal box allows for finite adjustments to the braking setup Link ECU means the V8 now runs without the troublesome air flow meter. Richard was on track recently at Ford Fair, for yet another track session! You can really see the oval racer influences in the cabin ETB Instruments DigiDash replaces all the original gauges... ...while a huge rev counter dances all the round to the 8000rpm limit! It may be a non-Ford engine, but you can’t fault the logic of fitting the 1UZ-FE V8 – it’s affordable, easy to tune, and ultra-reliable GAZ coilovers and top mounts ensure the suspension geometry is spot-on.

Toyota nailed it with the UZ-FE engines, starting with the 1UZ-FE. An all alloy construction made it light - 175kg, only slightly heavier than a Cosworth YB with ancillaries. Despite being complex (quad cam, 32 valves), Toyota’s legendary reliability means it’s a very solid engine that can go for hundreds of thousands of miles. All of the 1UZ’s had 6 bolt main bearings, but early ones (1989 to 1995) had 10:1 compression and thicker con-rods known in the scene as “big rod engines”, and made 256bhp/260lb/ft. In 1995 it got lighter rods, 10.4:1 compression and a bump to 261bhp/269lb/ft. In 1997 Toyota fitted its variable valve timing VVTi, upped compression to 10.5:1 and raised power to 290bhp/300lb/ft. You’ll find 1UZ-FE’s in Lexus LS400, SC400, GS400, Toyota Soarers, Hi-Ace, and Crowns. The 1UZ-FE developed into the 2UZ-FE (cast iron block for 4x4 use), and the 3UZ-FE (all alloy). A popular engine in the drift scene, and lots of aftermarket support means you can fit one into pretty much anything. It’s cheap, takes a hammering all day without breaking sweat, and companies like Bullet Cars in Australia make supercharger kits with claims of 450bhp+ on a standard engine!

“My friend Zac had a Toyota V8 powered Sierra, his conversion was pretty easy and it never broke, so I decided to go the same way...”

LESSONS LEARNT FROM THIS PROJECT? Time is very valuable!

THANKS Dan Thorne for all your help, Barra @ Barra Motorsport for the diff, Clint @ BHP for my ECU and tuning, TSK Auto Centre for help with my paint, Stuart, Dal and Sal, everyone at the Fraud Owners Club (a score’s a score!), and to my son Harry