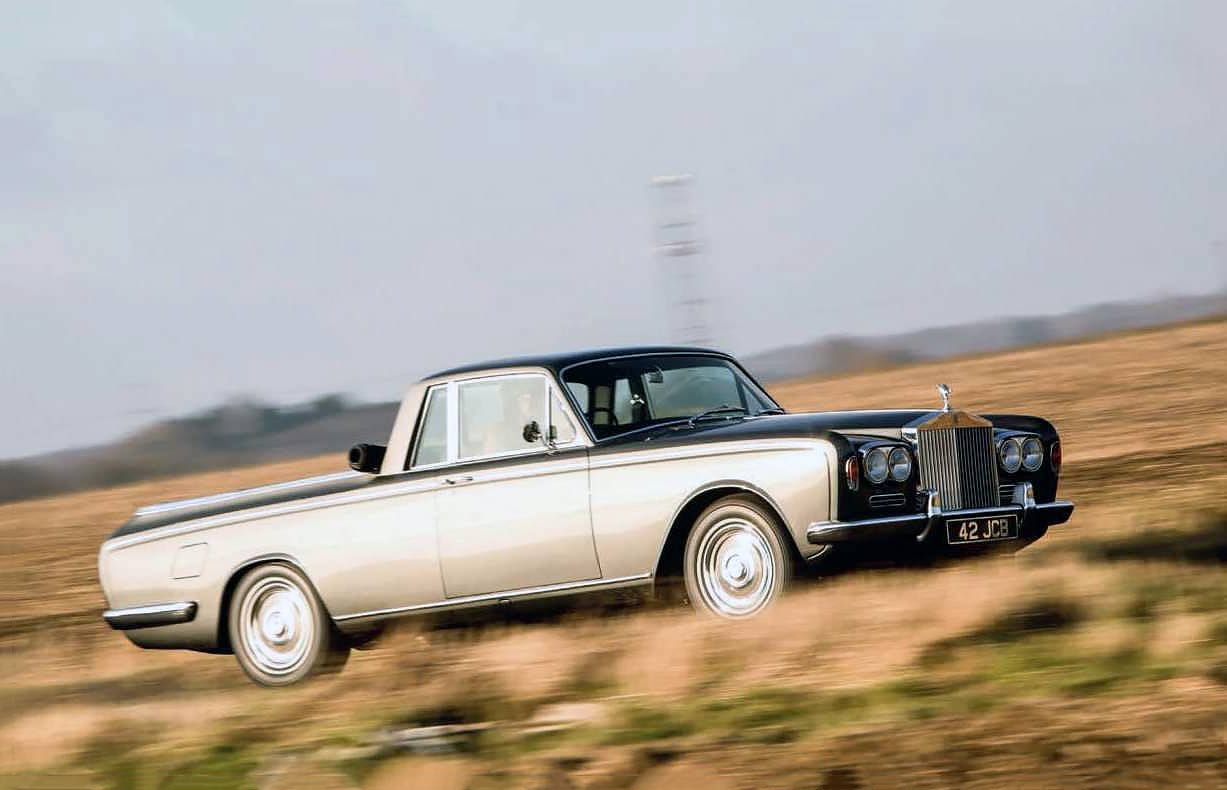 Rolls reversal. What better to do with a tired example of ‘The best car in the world’ than turn it into an unlikely commercial vehicle? Mick Walsh drives a unique Silver Shadow. Photography Tony Baker.

Crewe cut with a flat top. A striking Rolls-Royce Silver Shadow pick-up fit for a knight of the realm…

Even the most exotic models have been converted into load-lugging workhorses, but few as stylishly as this Rolls-Royce Silver Shadow, recently completed by Essexbased specialist Clark & Carter. The seed of the idea started back in the 1950s, when a youthful Anthony Bamford – now a peer of the realm and one of Britain’s most respected industrialists with the family firm JCB – spotted a Rolls 20/25 commercial being used by mechanics at the Crewe factory. The conversion left an indelible impression on the young enthusiast, and six decades later inspired the ultimate paddock support vehicle.

The project really got started in 2014, with the discovery in America of a Silver Shadow that had already been converted. “Lord Bamford found it, but when it arrived at our workshops it was a bit of a shock,” says Steve Clark. “It was painted white and the conversion looked a bit as if a hillbilly had done it. Novel features included a gun rack, a drinks cabinet and deep shag-pile carpet. The bumpers were crudely cut and the side trims had been replaced by ‘Town and Country’-style wood. The rough panel gaps had been brazed and loaded with filler.

“We soon discovered that it would have been much easier to start from scratch than to restore a previous conversion. I don’t really approve of cutting up a Shadow but, because this one had already been done, it didn’t bother me so much.”

Over the ages, several Royce models have been transformed into workhorses, none more legendary than the magnificent Silver Ghost that was famously converted into an armoured car during WW1. America more than any other nation has the least reverence for Britain’s finest, and possibly the oldest Rolls pick-up was on a Springfield-built Silver Ghost in the 1940s by citrus farmer Lindley Bothwell for use around his California ranch. Once past its exclusive prime, the beautifully engineered Phantom II chassis was converted into various commercials, ranging from a hearse that remained in service in Wales until the 1960s to a fire engine in Switzerland. Several British aristocrats transformed pre-war models into ‘woodie’-style shooting brakes as rural transport for the hunting set, while in India one 20/25 was modified into a jeep-style tourer to carry a local cricket team. Delivery firms and even ice-cream vendors have indulged in ostentatious promotional vehicles, and during the 1940s in England several garage owners saved old Rolls-Royces from scrap and stripped off their heavy coachbuilt bodywork to fit breakdown cranes.

Once the monocoque was developed, the challenge of a commercial conversion became more involved but it didn’t stop irreverent entrepreneurs looking for a prestigious promotional vehicle. In 1984, Champagne Krug transformed a 1979 Silver Shadow into a panel van for service around its Reims vineyards and for promo use in Paris, with the rear carrying two refrigerators. America again led the way with impudent reinterpretations, including a 1969 Silver Shadow estate built for Florida-based cigar magnate Millard W Newman. In the land of the pick-up, it was only a matter of time before the flagship V8 model was turned into a load-carrier, with the rear section cut off to make a flatbed and create the ultimate ‘Shad-amino’. As the ’70s status symbol became a secondhand bargain, so the chops became inevitable including jacked-up off-roaders with pick-up bodies. The team at Clark & Carter, which produces some of the finest Rolls-Royce and Bentley restorations at its impressive Cressing Farm base, is thankfully rather more respectful of the marque.

The inspiration for the Essex firm was very much John Blatchley’s original styling. Whereas other modified Silver Shadows have been crudely sectioned aft of the front door, with a solid metal panel behind, Clark decided to retain the rear quarterlight – much like the factory saloon. The rear window was inset further forward, which all combines to give an airy, glasshouse character. Where the rear doors would have been, new steel sections were made to retain the Shadow’s clean lines.

The pick-up bed and fold-down tailgate proved more of a challenge, says Clark: “The rear panel was made in aluminium for lightness and ease of use. The older conversion had a nasty rear bumper, so we took a standard spare and sectioned it to look more like a corner piece. We also decided to mount the rear numberplate on the lower valance, rather than on the tailgate, which looked cleaner. Under the bumper, a removable panel hides the fixings for a towbar.” Immediately your mind conjures the dream equipe of this unique car towing a GT40 down to Goodwood for the Revival Meeting. The shaping of the rear wing corners around the standard Shadow tail-lights is beautifully done but the final detail, a plated moulding along the top of the storage-area sides and the tailgate, brilliantly completes the makeover. I’m sure that iconic Italian powerboat designer Carlo Riva would approve.

The bodywork was painted Tudor Grey, which complements the natural wood finish, while white-line tyres set off the period look. The chrome side trim was reinstated, with an unbroken section running from the door to the tail, enhancing Blatchley’s elegant profile.

Inside, the cabin has been beautifully refurbished and retrimmed in a deep slate-grey leather, and with a black headlining it all feels like an exclusive gentlemen’s club. The only visible modern addition is a Pioneer head unit fitted below the deep veneered dashboard. Behind the seats is a security box to safely store valuables during race meetings, and the standard of workmanship throughout is superb.

The layout of the storage units in the back was carefully planned. “Billy and Bryan, the JCB team mechanics, offered advice,” says Clark. “As well as looking stylish, the rear had to make the car a practical support vehicle. We wanted to keep it simple, but it soon became more involved.” The finished result would impress any bespoke cabinet-maker. The left side is fitted out with a full Rolls-Royce toolkit and jack – just as you’d find in the original saloon’s boot, but all neatly clipped in place. The rest of the fixed side units are designed to carry the team’s toolboxes, race gear and smaller spares, while the middle section has removable panels to give extra length for carrying larger spares, such as a back axle. The suspension at the rear had to be modified to support heavier loads. New adjustable springs were fitted, which are dropped inside the turret to make more room. The rest of the mechanical specification remains standard Shadow.

The fittings are very much marine-inspired, with quality plywood sourced in Dorset while local chandlers provided yacht fixings. Clark & Carter’s storeman, Sean Chittock, spent ages combing the internet to find old-stock catches, and in the end several had to be made in the workshops. Solid teak was used for the edging to protect the units and, once finished, was further shielded with oil. The exquisite woodwork was all completed in-house by Colin Cutmoore.

Ever the perfectionist, Lord Bamford wanted several details to make the conversion extra special. The bespoke ‘Pick Up’ badge on the tailgate was made to match the style of the original Shadow emblem. When the canvas tonneau was first fitted, Bamford didn’t like the bare metal studs because they looked too prominent. Black replacements were sourced, which transformed the style of the rear deck when covered. When unclipped, the double-duck canvas is rolled forward and secured by leather straps.

The finished car is a credit to Drive-My’s talented team, and became a family affair with both of Clark’s sons involved: Stuart worked on the coachwork, while Jamie took on the assembly. You can’t help smiling when you open the driver’s door. Once in that sumptuous cabin, with the smooth V8 murmuring away, you soon forget the practical conversion behind. On the road, the superb ride, creamy power, feather-light steering and yacht-like yaw through the corners all fuel Steve McQueen Thomas Crown Affair fantasies. Is there a better place to enjoy Michel Legrand’s dreamy jazz soundtrack than cruising along in a Silver Shadow? On Essex country roads, it’s fun to watch reactions as first locals admire the famous frontage then, as the rear comes into view, they immediately scrabble for their phones to capture its silent passage. The pick-up will now become a fixture of the JCB historic race team, and eventually be seen at Goodwood events. Parked under the paddock shelters with the rear in the shade, you’d probably acknowledge it as a mint Silver Shadow, but the distinctive registration soon gives it away as the coolest support vehicle. Clark doesn’t like to think about the hours that went into conversion, so it’s likely to remain a one-off.

Undoubtedly the most exotic period pick-ups were the five Maserati fire trucks built for use at Monza and Imola circuits. The Quattroporte conversion was done by Bologna-based fire-extinguisher specialist CEA Estinori in ’1973, and included a high-pressure water canon. After high-speed circuit service (during which one was destroyed), the four survivors were saved by enthusiasts and scattered around Europe.

There have been several Porsche-based pick-ups, none cooler than that created by Dick Troutman, the legendary Californian race-car builder, who in 1972 converted a pair of 914s. One was based on a standard car, with Opel Manta tail-lights and a targa top; the other was a more radical, wide-arched 914/6 that was later transformed into a race support vehicle. In addition, a Dane went to great lengths to avoid hefty local taxes on sports cars by turning his 928 GTS into a pick-up, which became a much-photographed attraction around Copenhagen.

Not even the Prancing Horse is safe from the cutting torch, because back in 2014 the London Supercar Workshop transformed a Ferrari 412 to create a 3ft-long open back with teak wood panelling. Other recent conversions have included a GT350-style Mustang imported by pony-car specialist Bill Shepherd.

But few towing vehicles can hold a candle to Jerry Hathaway’s Citroën SM Bonneville equipe. The Los Angeles-based specialist and record-holder once motored up to the salt flats with an immaculately prepared SM pick-up conversion hauling a four-wheeled, hydropneumatically suspended trailer carrying his 200mph SM speed-record challenger, all fitted with Moon Disc wheel trims. This impressive set is now on display at the Mullin Automotive Museum, California in a special Citroën exhibit.