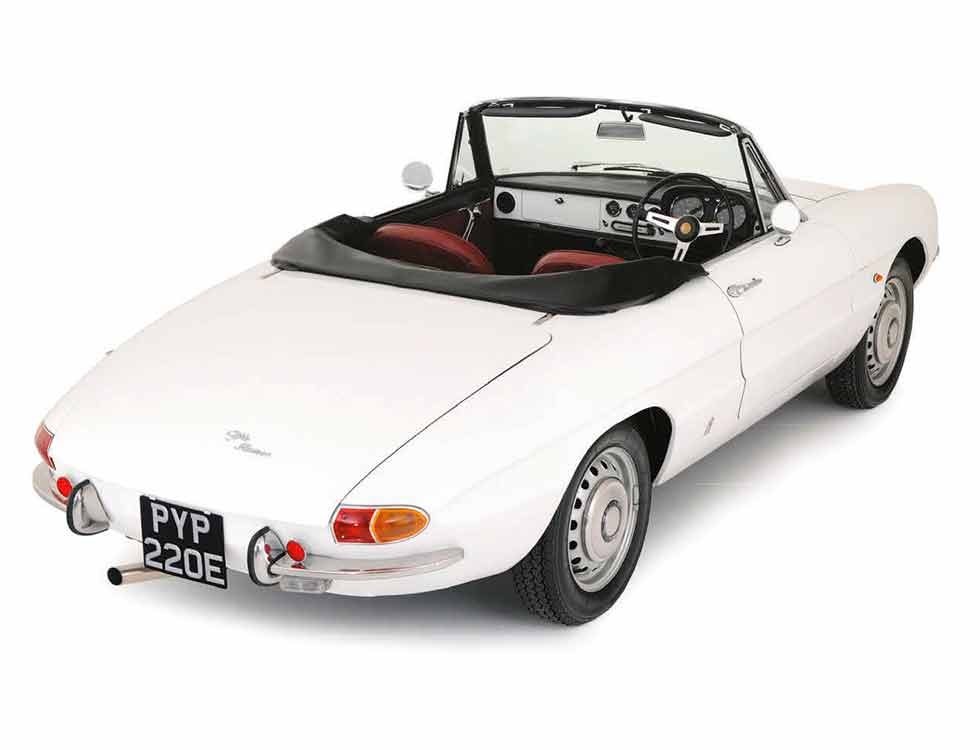 This rare right-hand drive Alfa Duetto is a curvaceous ‘cuttlefish’ classic like no other. We get behind the wheel of a fabulously restored car for a taste of the magic. Story by Peter Nunn. Images by Michael Ward.

MUSSELS & CURVES  Why the original round-tail Spider still has it.

The owner of this lovely 1967 Alfa Romeo Spider 1600 ‘Duetto’ 105-Series, Gary Plumb, can recall the exact moment he first laid eyes on his car. Responding to a classified advert, he stood watching as the seller’s garage door slowly rose up and the curvaceous tail end of the Duetto came into view. Right there, Gary admits he was smitten. With a sheepish smile, he recalls: “Within the first 30 seconds of physically seeing the car, I said to myself, I’m buying this.”

Such is the pulling power of that classic Pininfarina shape. More than 50 years on, the Alfa is still an immensely striking car; an unmatched icon of style and an object that brings fresh rewards each time you see it. The Duetto delivers on the road, too. Over a succession of open country roads in and around Henley on a glorious summer’s day (top down, of course), Gary’s pristine, beautifully sorted Duetto was a sheer delight.

This Alfa just looks, sounds and feels very special. The lusty Alfa 1.6-litre twin-cam matched to that long, wand-like gear lever: yes, you’ve heard it before, but it’s a characterful quality combo that still works so well, putting many modern cars to shame.

The way the Alfa responds so keenly to steering and throttle inputs, talking to you every step of the way, is another key part of that emotional journey, deftly setting the Alfa apart from mere rank and file machinery. And yet, classy and jewel-like though it is, the Duetto is not for everyone, let’s be honest. As heretical as this may sound, when the Duetto first appeared at the Geneva Show back in March 1966, the reviews were mixed. As the successor to Alfa’s much loved 750/101 series Giuliettas, the Duetto was clearly a step in a different direction: more of a showboat, with that long exaggerated tail, in particular, raising plenty of comment in some quarters, not all of it complimentary.

By 1970, Alfa had changed course and dropped the round-tail Spider for a shorter, sawn-off Kamm tail. The merits, practicalities and aesthetics of that particular decision continue to be debated among Alfisti to this day. Are you round tail or square?

Well, Gary Plumb is quite clear on that particular issue. For him, it’s the classic ‘cuttlefish’ round-tail shape that’s numero uno. Said to be the very last design penned by Battista Pininfarina himself (the founder of the legendary design house), it’s a real wow in the metal. However, Gary does admit that he did look at a Kamm-tail Spider about six years previously before retreating to reconsider his buying options.

It’s not only the shape but also the rarity of the Duetto that appeals. Today, boat-tail Spiders are increasingly scarce, original right-hand drive cars in impeccable order even more so. In discussions with the Alfa Romeo Owners Club 105 Giulia Register, there are precisely 59 right-hand-drive Giulia 1600 Spider Duettos on its books, of which perhaps 20 are in current circulation. Gary then estimates that when it comes to ‘white over red’ cars, there appear to be just three, with only one of these actually being on the road.

We should remember of course that the Duetto was a highly rarified buy when new, priced at only £150 less than an E-Type Jaguar which had six cylinders and far brawnier performance. Records reveal Alfa Romeo built just 380 RHD 1600cc cars between 1966 and 1967, so the chances of seeing another one coming the other way, let’s say, are not high.

Everything changed for Gary when he spotted this white Duetto for sale in Swindon. He went to see the car and his spirits soared as the garage door went up, which is where we came in. It turns out the vendor was an aircraft engineer into restoring cars, not just Alfas, and along the way the Duetto had been rebuilt to the last nut and bolt. “Yes, the car was fundamentally there,” recalls Gary, “restored to a good standard. He’d done the hard work.” So a deal was done and Gary became a Duetto owner.

On the day we meet, Gary turns up with a big ringbound folder full of correspondence on the car, including one of the new-style ‘Certificato di Origine’ statements from Alfa Romeo in Arese. This confirms the car’s AR 710154 chassis number, build date of 29 April 1967 and date of sale in England of 5 May 1967.

Something strange then happened because the original owner in Christchurch, having bought a highly specialised Italian sports car painted white, then decided to change the colour to blue! Some years passed, then the car was taken off the road in 1981 as a result of a blown head gasket, further compounded by a failed attempt at a repair which resulted in the timing chain accidently dropping into the sump.

Two friends (one of whom had a 1300 Junior of his own) then came on the scene to assist. Eventually, the Duetto passed from one friend to another, ending up in Swindon with owner number three, a serial car restorer. Starting in 2012, he undertook a full ‘back to bare metal’ ground-up restoration. As soon as it was completed, he put the Duetto up for sale to fund his next project, which is where Gary Plumb came in, buying the car in September 2016.

Of his Duetto, Gary confesses with a smile: “I love the design and the complexity of that shape, it’s so flowing with not a straight line on it. True to form, it feels just like a 1960s car. For me, the whole system of it, the driving experience is very special. I also like the comments you get. I’m not looking for praise but both guys and girls love it.”

Gary, who is an IT engineer, bravely keeps the Duetto in an unheated lock-up and says he does about 1000 miles a year in it. He’s done Cotswolds Alfa Day and the Goodwood breakfast meeting, as well as the Auto Italia Brooklands Italian Car Day. He won Car of the Show at the 2017 MITCAR event, after which the Duetto was displayed at the 2017 NEC Classic Car Show, so its fame is spreading.

For Gary, another fascinating (if perplexing) side to the car is the way it was originally built. That’s to say, Pininfarina made the bodies and assembled the model at its Grugliasco plant but which parts went into the car depended on what was around at the time. “The spec was changing all the time when it came to things like carbs and brakes,” notes Gary. “There’s no official record of what went on the car.”

Gary’s 1570cc twin-cam is running Webers but other Alfa 105s of that era could easily have had Solexes or Dell’Ortos. Brakes might be Dunlop or ATE. However, Gary’s quest goes deeper than that and it’s the finer details he’s keen to finesse. Through a global network of Facebook friends, he enjoys the chase of tracking down small detail parts, all of which of course have to be period-correct.

Oil/radiator caps have come from the Netherlands. America has provided a heater control panel and rare rubber tool kit boot strap. Replacement light lenses have been found in Germany. An accelerator stop came from Denmark. Italy, Israel, Canada, Slovenia and of course the UK have provided other myriad parts for this fastidious Duetto project. Even radiator hose clips come under scrutiny.

All of this become understandable when you see the Duetto in the metal because it does look fabulous both inside and out, no question. The styling is, of course, what makes the Alfa such a show-stopper yet the cabin also catches the eye in all the right ways. In particular, the artful simplicity of that original metal dash, those beautifully calibrated Jaeger Italia instruments, that evocative view over the seductively sloping bonnet – features like these haven’t aged and some arguably weren’t improved in later versions of the 105 Spider.

The Duetto comes over as a genuine Italian exotic – sophisticated and desirable. Just imagine what it was like when new on the Italian Riviera. Gary’s car comes over as fundamentally well sorted, very wieldy and easy to place on the road. During an hour’s drive over scenic back routes, the Alfa felt reassuringly solid, scuttle shake conspicuous by its absence. As with all 105 series Alfas, roadholding isn’t the car’s crowning glory and the tail end can become lively over indifferent tarmac. It’s only the stiffness of the pedals that’s a slight cause for concern here; otherwise, we can imagine it must be pretty darn close to how it was when the artisans at Pininfarina built it.

Ah yes, but we can live with its foibles. It’s the accuracy and response of the steering, the precision of that celebrated five-speed gearshift, the eagerness of that rumbly twin-cam – it all comes together to create a wonderfully intuitive drive experience. Bella macchina indeed.

White-on-red is a rare colour combo. This example has parts sourced from across the globe. Original Duetto ‘cuttlefish’ round tail is more highly sought-after than the later Kamm-tail treatment. Some say the original 1.6- litre twin-cam engine is the sweetest ever fitted to the Alfa Romeo 105 family.