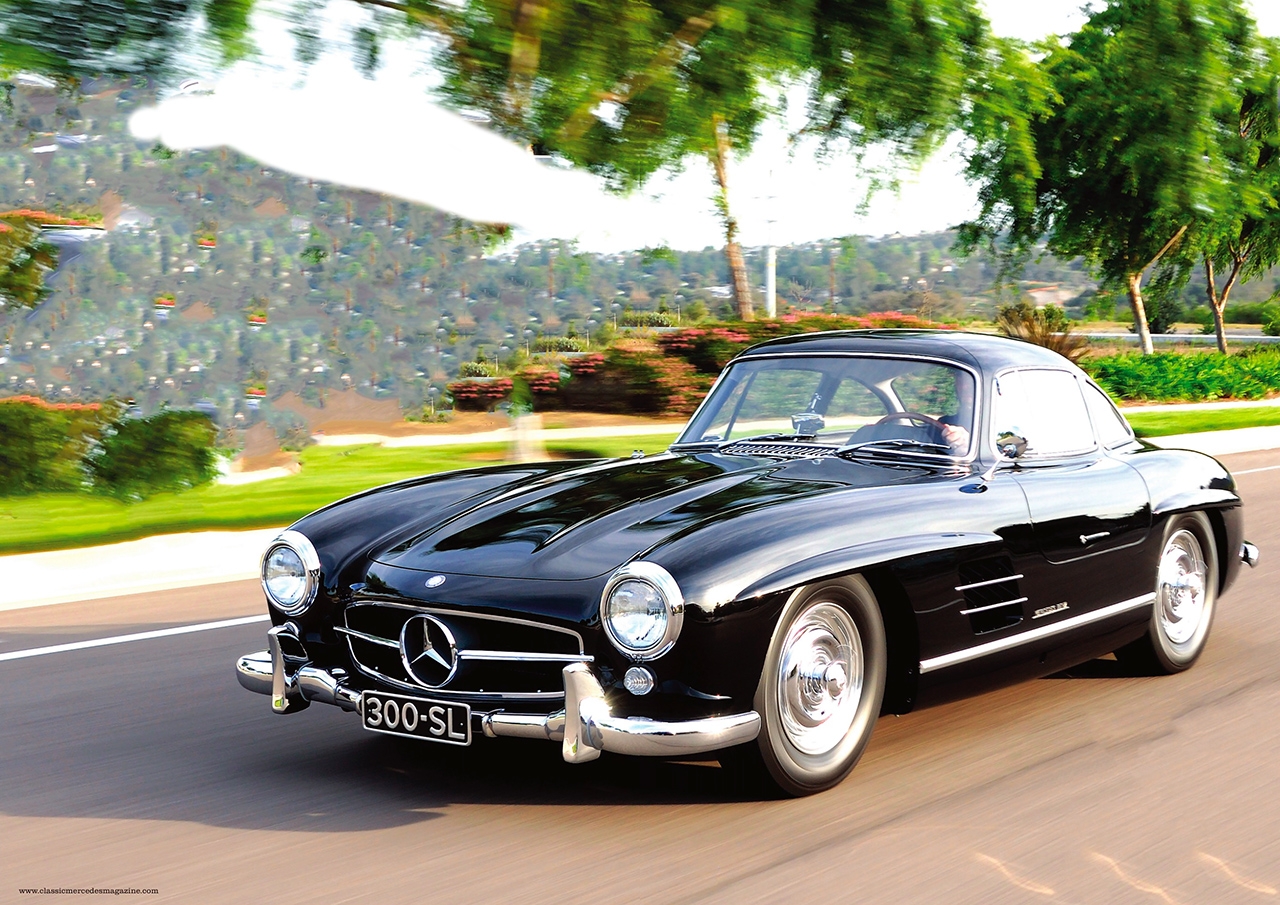 The W198 300SL Gullwing was an extraordinary sports car of its day, and a few well-chosen but hidden changes make this fully restored example even better to drive, Richard Truesdell reports. The majority of 300SL Gullwings produced initially were snipped to the United States, with many ending up with Hollywood celebrities, such as Clark Gable”.

The Mercedes-Benz 300SL Coupe W198, or Gullwing is undeniably an automotive icon, one that many enthusiasts reckon is the first post-war supercar. It was the ultimate ‘halo’ car for the marque, developed at a time when much of what was then West Germany lay in rubble. It was born of the vision of an Austrian turned American, Max Hoffman, who convinced Mercedes-Benz to build a road-going version of its all-conquering 300SL race car. And because of the importance of the American market, the production version of the 300SL Gullwing made its debut at the 1954 New York Auto Show rather than, say, the Geneva show.

The production version of the Mercedes-Benz 300SL Gullwing, designated the W198 series, was even more powerful than the W194 race car on which it was based. While the W194s three-litre straight-six, taken from the big 300 Adenauer saloon, was fuelled by three carburettors, the W198, using the same basic engine, featured the first production application of direct fuel-injection, using technology that had been pioneered by Bosch in the Daimler-Benz DB601 aircraft engine during World War Two.

One cannot overestimate the importance of Hoffman in the creation of the 300SL road car. Here was a man who genuinely had his hand on the pulse of the American market, especially for luxury cars. His insight into his well- heeled customers, many of them entertainment celebrities, gave him leverage with the factory in Stuttgart. At the time there was still a degree of resentment on the part of the American public, due to Germany’s involvement in the war less than a decade before, yet the reputation of Mercedes-Benz remained beyond reproach. 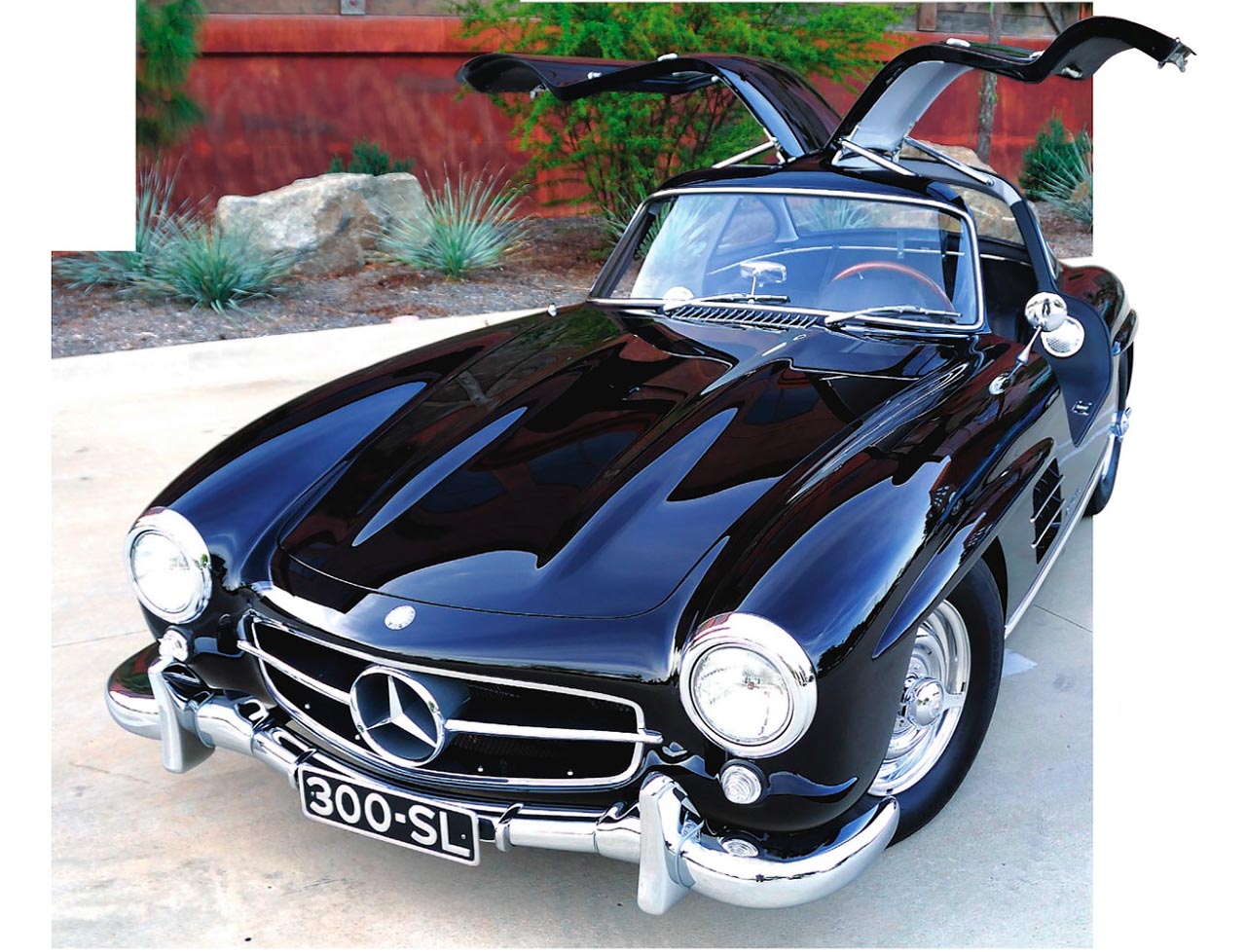 The engine, while robust, was heavy, forcing Mercedes- Benz engineers, including the highly respected Rudolf Uhlenhaut, to put the proposed race car on a diet, specifying a lightweight space-frame constructed from triangular tubes to provide the necessary strength. To improve aerodynamics, the engine was canted over at an angle of 50 degrees, helping to provide a Cd figure of 0.376, 20 per cent better than the best of its more powerful contemporaries. Weighing just 870kg unladen, the lightweight 173bhp 300SL was capable of sprinting from standstill to 62mph in seven seconds and, with enough road and with the correct gearing, a top speed of 150mph.

Because the rules governing sports car racing obliged eligible vehicles to have two properly opening doors, this presented a dilemma to Uhlenhaut and his engineering team. Cutting the doors into the space frame would reduce its structural integrity, so they came up with the novel, top-opening gullwing doors, a trademark carried through to the road car introduced a couple of years later.

Success in competition, especially after wins in Mexico in the 1952 Carrera Panamericana road race and at Le Mans that same year, was all the ammunition Hoffman needed to approach the factory to persude it to build a production version. He promised to take 1,000 cat’s, and as a result of his confidence, the majority of the 300SL Gull wings produced initially were shipped to the United States, with many ending up with the Hollywood rich and famous, such as Clark Gable, behind the wheel.

As far as current owners Pat Matthews and his wife Patti Paulson know, their black 1956 300SL Gullwing, part of a collection of classic Mercedes, has no known celebrity owners, but that doesn’t mean that it lacks an interesting past. They bought it in February 1999 and it subsequently underwent a complete mechanical restoration that took two years. The couple then drove it from their home in the San Francisco Bay Area to Victoria, British Columbia, in September 2001 for the Gullwing annual convention, a round trip of 2,000 miles. It was shipped to Detroit in 2003 for a trip around the Great Lakes to Niagara Falls for that year’s Gull Wing Convention. In 2005 it was back to the East Coast when the car was shipped to Rhode Island for that year’s Gull Wing Convention.

In 2009 the car was shipped to Adelaide, Australia, for the Classic Adelaide Rally. After the rally the adventurous couple took advantage of the opportunity to drive the Great Ocean Road lo Melbourne, after which a ferry ride to Tasmania allowed Patti and Pat to circumnavigate Tasmania for a week.

On returning to the US, however, Matthews installed a specially modified BMW/Getrag five-speed manual transmission. He says the five-speed upgrade makes a world of difference, especially on long drives, dropping engine rpm at 75mph from 3,500 to 2,900rpm while simultaneously improving fuel consumption.

After that the car attended several other Gull Wing Conventions until the autumn of 2011 when Matthews, who does much of his own work on the car, carried out a number of upgrades in the interest of improved drivability. The engine was removed and rebuilt, while a 55-amp alternator, a 123-series electronic distributor, an electric cooling fan, and an electronic rather than mechanical fuel pump were installed – all easily reversible changes. Other upgrades included a new wiring harness, a rebuilt steering box, added insulation, and not least a respray. 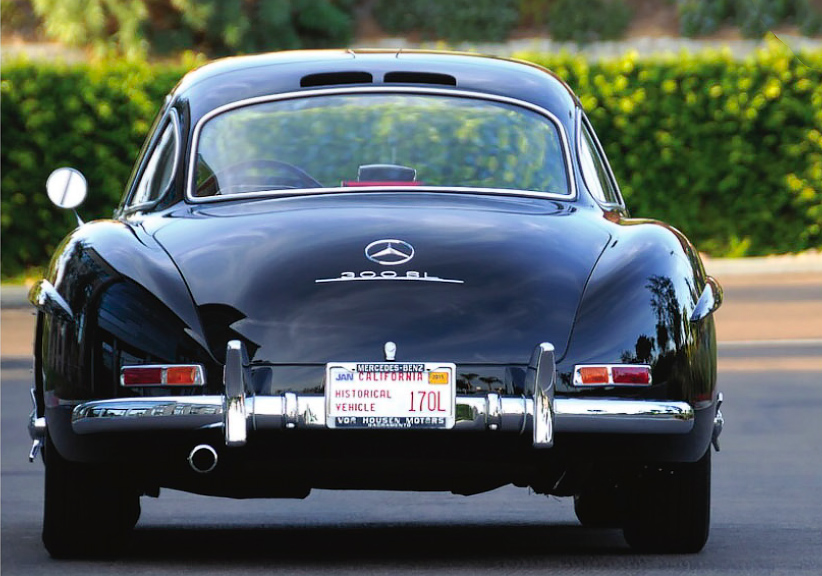 After this comprehensive refurbishment, in 2012 the couple drove through Yosemite National Park, stayed at June Lake and journeyed on to attend the 2012 Gull Wing Convention in Palm Springs, California. From there the car made another ocean voyage, this time to Auckland, New Zealand, for a 2,200-mile 300SL Rally, after which the car shipped back to Steve Marx in Costa Mesa, California for some mechanical work.

And this is where the story gets really dramatic. On the return trip to California, the shipping container that the 300SL was secured in was dropped. Matthews got a call from the shipping agent who asked, “Did you put the car in the container damaged?”

Thankfully, Matthews had hundreds of photographs documenting the condition of the car before it was loaded into the container. After examination of the car it was discovered that the rear axles were bent forward two inches. Matthews called noted restorer Jerry Hjeltness of Hjeltness Restoration in Escondido, California, who examined the Mercedes, and found that while the exterior damage initially appeared slight, there was structural damage. The bootlid was bent and the doors misaligned.

The decision was made, in consultation with Hagerty, the insurer, for the car to undergo a complete restoration. Hagerty, through its underwriter, Lloyd’s of London, who carried the marine insurance, would pay for all damage related to the container drop, while Matthews would cover additional work. This included eliminating some rust, the cost far less while the car was undergoing the other repairs.

When asked if the car is over-restored, Matthews replies, “It’s better than when it left the factory, but I don’t consider it over restored in today’s Gullwing world.”

After a year at Hjeltness Restoration, on March 31 2014, Classic Mercedes was on hand as Matthews took delivery. There were smiles all around as he climbed into the cockpit for a 90-minute drive over to Steve Marx’s shop in Costa Mesa, and during which he was the recipient of dozens of thumbs up from other drivers. They realised they were seeing something special, a Gullwing being driven as was intended when it was designed more than 60 years ago.

Not much luggage space, but this Si’s owners take it on many long journeys.

At Hjeltness Retoration for a rebuild following some damage during a shipping.

This was 2012, at the Gull Wing Convention held at Palm Springs, California.

“Because of the importance of the American market, the 300SL Gullwing made its debut at the 1954 New York Auto Show ”

The nose of the 300SLis heavily chromed and has a beautiful 1950s look.

Flipping down the steering wheel is essential to make entry to the driver’s seat.