MODDED MERCS  An unusual estate – well, it is an art car…

The Techno Classica Essen in Germany’s industrial heartland is a show not to be missed. Everything that is good and important for the classic car hobby, can be found in Essen, spread over 14 halls. Reason enough for Mercedes Classic to visit Hall 1, the “Mercedes Hall”. A fabulous mixture of Daimler AG corporate as well as Mercedes-Benz Club cars caught our well-trained eyes, but none more than Fred Oehmke’s fabulous W126 S-Class Shooting Brake.

Mercedes never officially made a five-door S, which got us talking to Fred about where his car originated from. In addition to the truly distinct shape, it was the colour combination of powder blue outside and bright red leather inside that made us see that this was far from being an ordinary cut and paste job.

Fred, an affable 55year-old fan of the brand, has a number of classic Mercedes’ at home, “but all of them are blue metallic with a beige interior”, he says with a smile. “This one found me rather than the other way around. My focus is always on cars in the same colour combination. It was my wife who fell in love with this one especially because of its unique paint. She works in fashion, and this presented itself as a perfect backdrop for some of her photoshoots”.

Fred quickly reveals the remarkable journey this car has been on. It started life as a 500 SEL long-wheelbase saloon, VIN WDB126037120162333. Externally it was finished in beautiful 904 dark blue, a classic non-metallic colour of the era.

On the inside, the conventional choice was leather in grey 238A. It was originally delivered to the Mercedes- Benz sales subsidiary in Düsseldorf, a not so weird choice when you consider that the city on the Rhine is the epicentre of Japanese business in Germany with a thriving Japanese community. We’re suspecting this was some sort of “European Delivery”, as the car was first registered in summer of 1982 in Osaka/Japan to female sculptor and artist Yayoi Kusama, a well-known figure in Japanese art circles.

The lady drove the car for about two years but kept it mainly inside her studio. “She must have done fairly low miles”, says owner Oehmke, “I suspect not more than 15-20,000 miles until the transformation”.

And what a transformation it was. As part of her art work on the 500 SEL, Mrs. Kusama had the entire car dismantled and the roof lengthened to create a shooting brake design with a sloping rear hatch. The fifth door was created entirely from scratch but used the original Series I W126 rear window which adds to the soft and curvaceous rear. To the side, additional windows were added behind the C-pillar, but it has to be said they don’t appear to fit naturally in the newly created D-pillar design. The rear doors were kept in shape and size.

While all sheet metal was formed by hand to this unique design, it might be surprising to learn that much of the original rear was retained. The rear valance, the lights, bumper and license plate mounting were all left untouched.

On top of it all, two roof rails were fitted which are not from the 1980s Mercedes parts bin.

The finished product underwent a colour change to suit its new designation as a piece of art. The entire car was painted 934 China blue, in itself a Mercedes-Benz colour. Everything was painted this colour, the body, the engine bay, the inside of the wheel arches and the underside of the car. Even the bumpers, door handles, and wiper arms were are now painted china blue.

Inside, grey had to make way to a vibrant and bright red, but again a Mercedes hue, 477 medium red. “Everyting was executed in Mercedes tones”, confirms Fred with astonishment. Seat covers, door cards, carpets on the floor and even in the boot were changed to red. In addition, a number of wood applications were specifically designed to fit into the new interior. The original steering wheel now also sports a partly wooden rim. After its transformation, this one-off Shooting Brake was only used for displays in Mrs. Kusama’s studio and a number Japanese art galleries. “It wasn’t all like that when I bought it just a little under year ago”, reveals Oehmke. “The ‘Sacco boards’ were medium blue and the bumper chrome had been deliberately scratched, don’t ask me why. Took us forever to polish them again. I then had the boards colour-matched to the rest of the car”.

Technically, the car remained unchanged, which facilitated the registration in Germany after the car was reimported to its country of origin. Because of its over 30-year rest as a piece of art, Oehmke had to undertake a thorough recommissioning before applying for the German TÜV. “We had to replace all suspension elements and bushings, as well as all lubricants and switched the air con to R134a. In February it was registered to me and in March it had its first outing here at the Techno Classica”. From here on out, Fred Oehmke plans to use his new art car only sparingly for club meets and exhibitions like these. Are there any others? Oehmke smiles: “The artist was very particular. After the build she made sure that all her drawings were destroyed to prevent copycats. Altough we’re not entirely sure there hasn’t been a second one built in the 1980’s”. As it stands, Fred Oehmke’s china blue W126 shooting brake is certainly a true work of art and we’re bound to see it again on the classic car circle.

“The car was first registered in summer of 1982 to sculptor and artist Yayoi Kusama.”

“The fifth door was created entirely from scratch.”

“The bumper chrome had been deliberately scratched.” 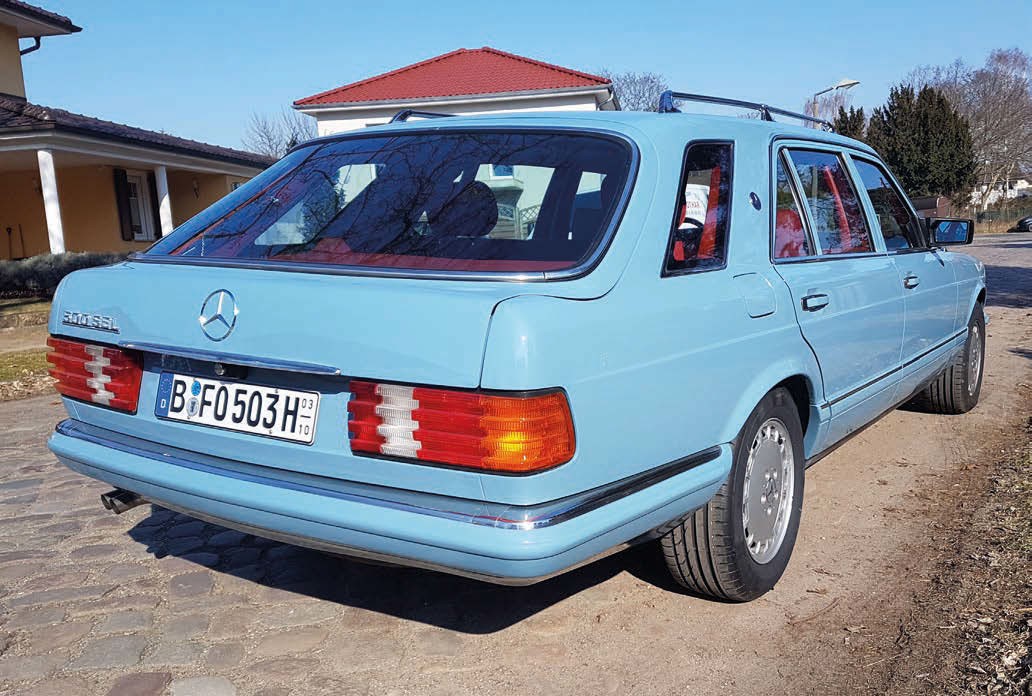 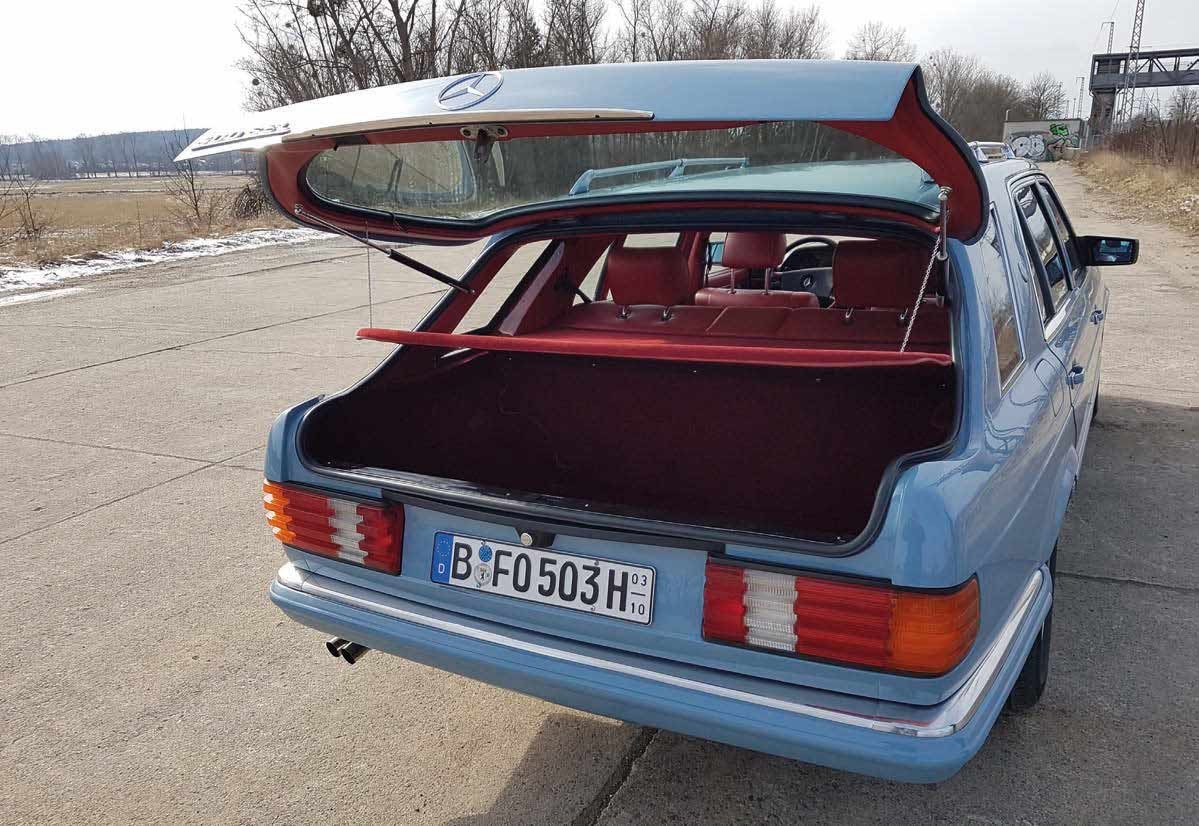 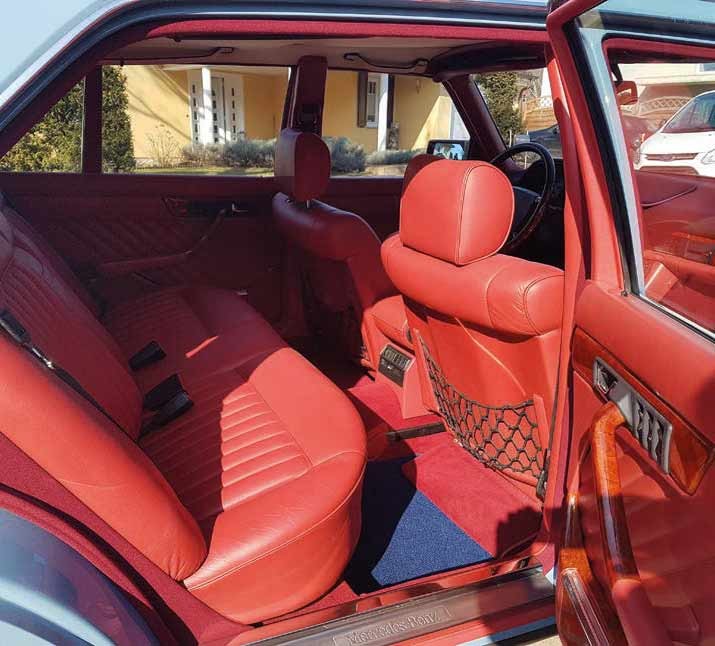 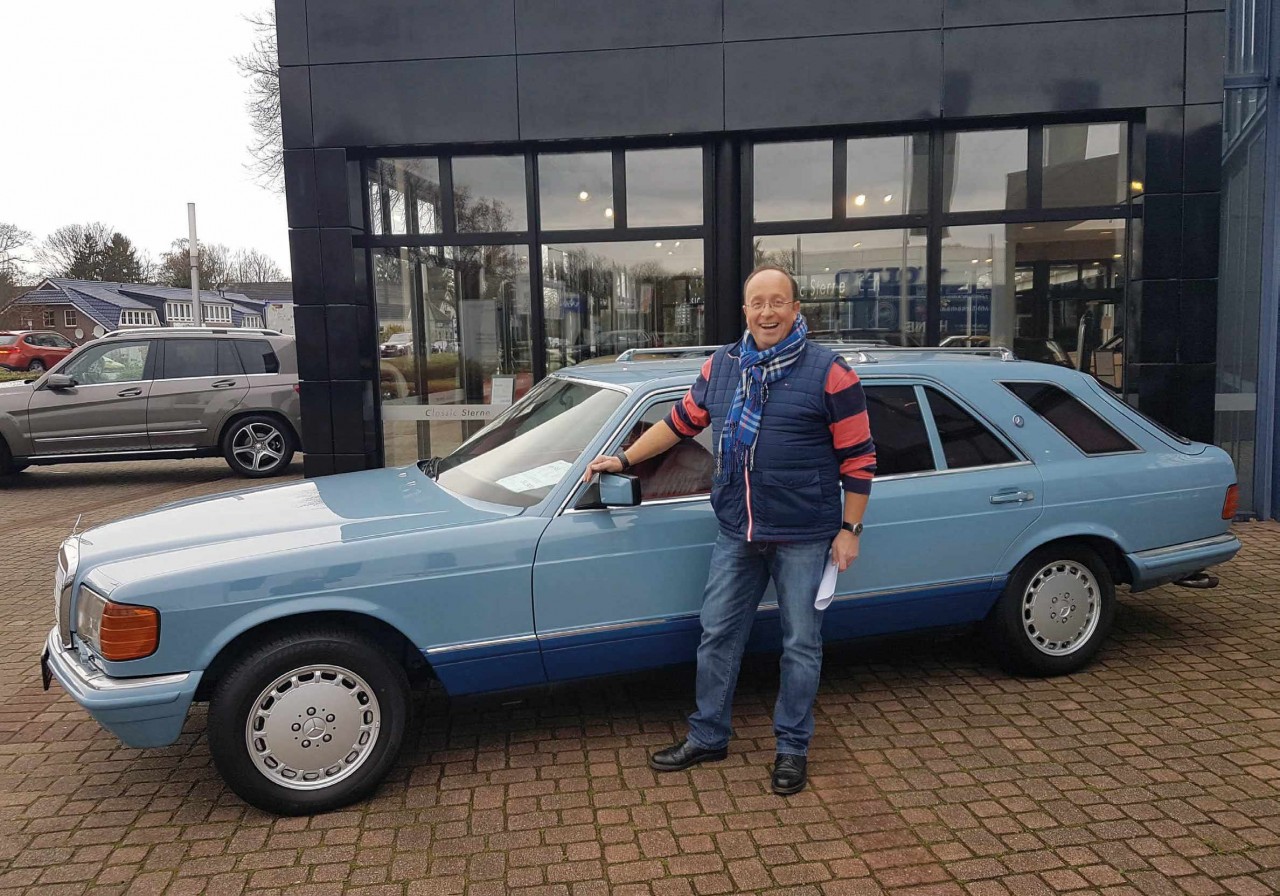 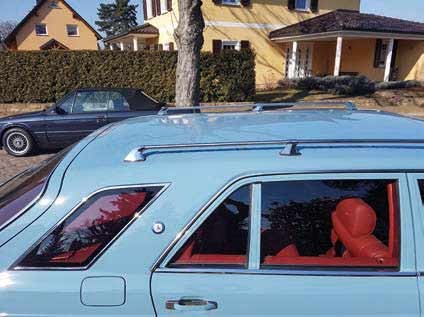 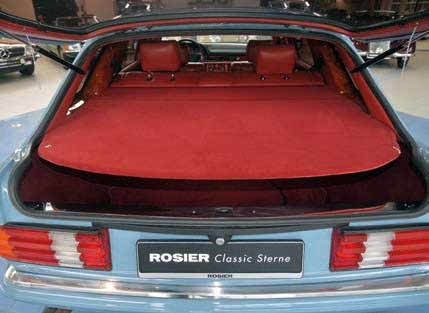 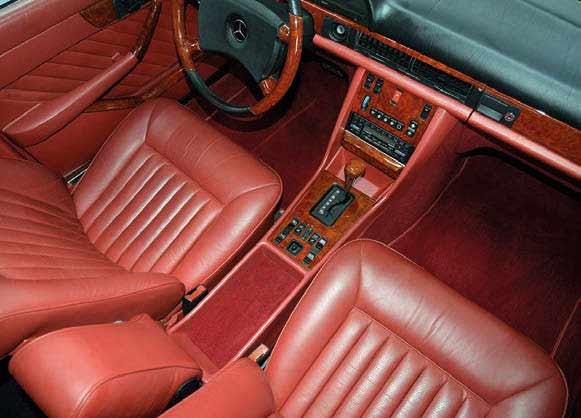 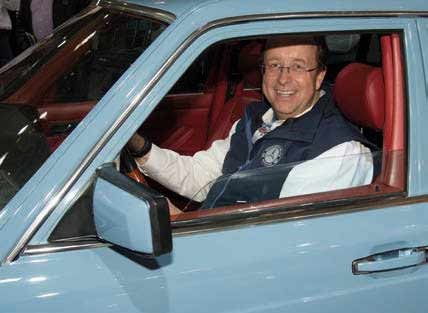 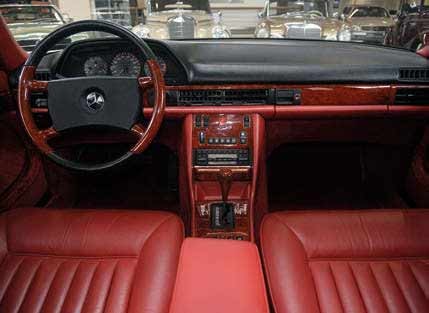 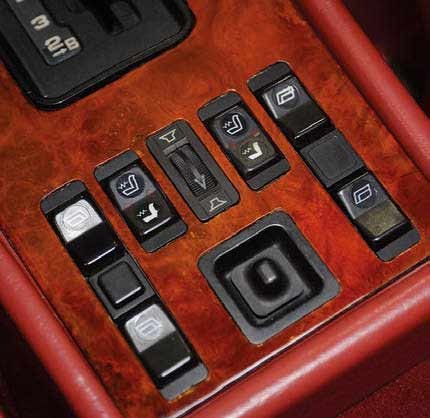 Left: This well-executed conversion retains much of the original rear end. Left: Vibrant interior is an original Mercedes shade.