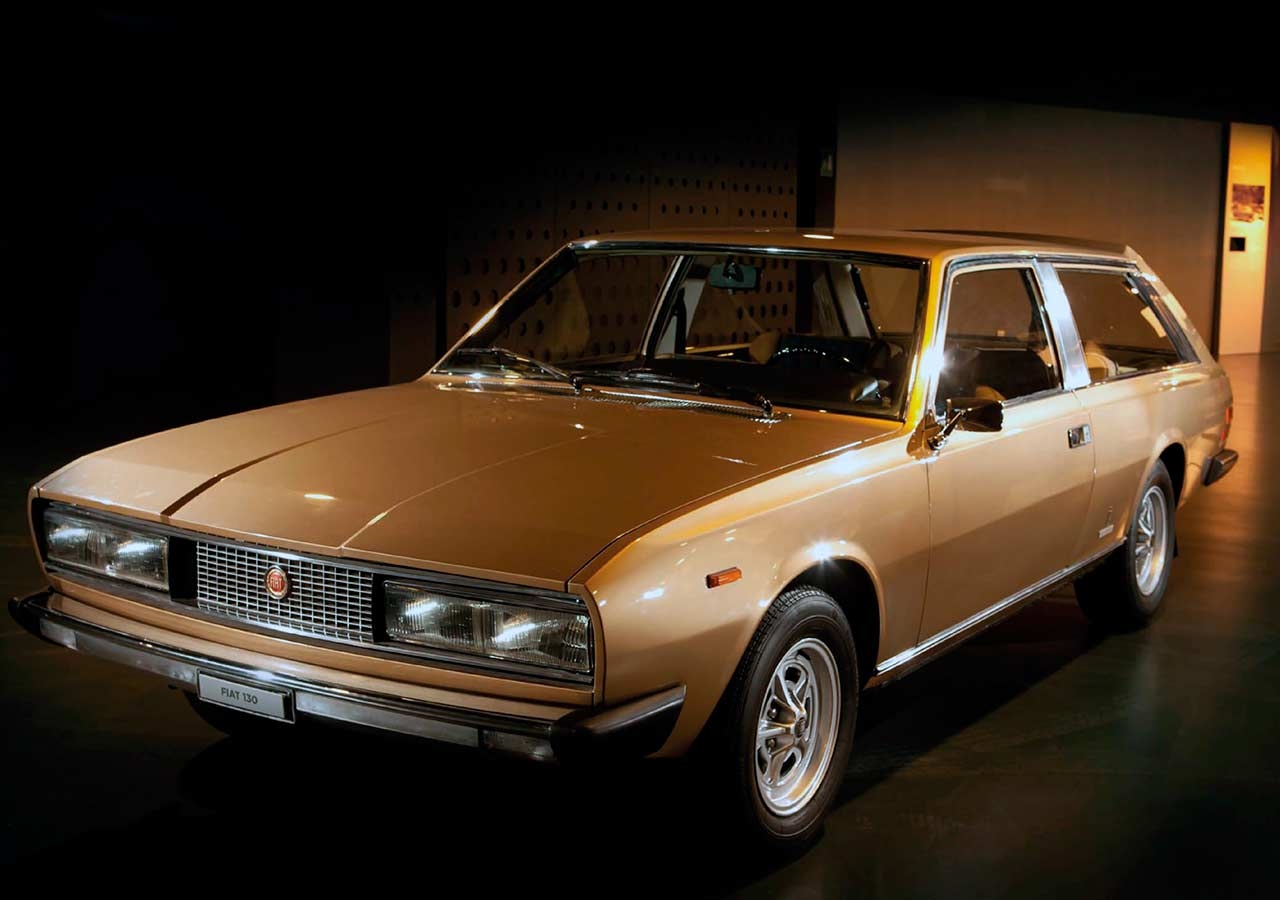 Custom-built for the boss. Martin Buckley tells the story of the bespoke 130 shooting brake designed for Fiat head Gianni Agnelli. Photography Tony Baker. A Fiat like no other  Gianni Agnelli’s fantastic one-off 130.

When Gianni Agnelli took over as chairman of Fiat in 1966, aged just 45, he had already experienced enough living for two men. As the favoured grandson of the firm’s founder, he had long been groomed for the top position but, after colourful war service on the Russian Front and in Libya, it was felt that the heir to this industrial fortune needed a little time to relax. Thus, for the next 20 years, the young Agnelli made it his business to have some fun. He was, after all, immensely wealthy, hawkishly goodlooking and possessed of an immense charm that, seemingly, no woman could resist.

Agnelli was the prototype of the jetset playboy. In the 1950s, he was a permanent fixture of the gossip columns, rarely spotted without a starlet on his well-tailored arm – he reputedly bedded Rita Hayworth and Anita Ekberg among many, many others – or else on his way to a party of Bacchanalian excesses on his yacht or at the Villa Leopolda, his famous Riviera bolthole.

It was a hedonistic but high-risk lifestyle in which his famous pals sometimes perished in their prime at the wheel of fast cars, Aly Khan (in a Lancia Flaminia) and Porfirio Rubirosa (in a Ferrari 250GT Cabriolet) being the best-known casualties of glitterati indulgence.

Agnelli was probably too good a driver for that, although he came close. In 1952, aged 31, he famously crashed his Ferrari into the back of a truck as he drove along the Corniche above Monte-Carlo. Trapped in the wreckage, with his right leg broken in seven places, it is said that Gianni’s only concern was that the young lady he was taking home should be protected from the prying lenses of the paparazzi. So we can add chivalry to the list of virtues of a man who is still regarded as almost a saint in modern Italy, but it should probably be added that he had apparently just been caught in bed with said passenger by his long-term partner Sarah Churchill.

That accident affected Agnelli for life – his subsequent cars had to be specially adapted for his gammy leg – although it never cramped his style nor slowed him down. Neither did his marriage (to an Italian princess, of course) the same year; well into his 70s, the extra-marital indiscretions of the man were still legend.

When he first laid eyes on this Fiat 130 Maremma in 1974, Agnelli had left this carefree image behind. Still beautifully dressed – with his trademark watch over shirt cuff – he was by then Italy’s most powerful international businessman, who counted Henry Kissinger and Edward Kennedy among his close friends.

In a country that was increasingly threatened by political unrest and left-wing terrorism, his former taste for custom-bodied Ferraris – such as his Superamerica or the wacky three-seat, centre-steer 365P – no longer appeared appropriate. Agnelli was a leading industrial figure and the number-one target for kidnappers and assassins; he had a cyanide capsule hidden in one of his teeth for just such an eventuality.

Agnelli drove everywhere flat-out, paying little heed to red lights – particularly in his home town of Turin – and was never still long enough to stay in a sniper’s sights. Niki Lauda said that being driven by Gianni was one of the most terrifying experiences of his life. Agnelli usually managed to evade the bodyguards who became a necessity of his position, and his long-suffering chauffeur generally ended up in the passenger seat talking to his boss about football.

Agnelli adored the anonymity of his dark blue 125 (supposedly his favourite personal car of all). But, as Fiat boss, he was a natural candidate for a 130 – perhaps even an armoured saloon after the kidnapping and murder of former Italian president Aldo Moro from the back seat of a standard example in Rome in 1978.

What is known for certain is that he used a preproduction 130 Coupé (in a non-standard light cherry red hue) and that he actually owned the Maremma. As a close friend of Sergio Pininfarina, it is possible that Agnelli had suggested the idea of the Maremma to him. It is just the sort of glamorous trinket that spoke of the beaches of Cap Ferrat or the slopes of St Moritz to a man who was still a keen swimmer and skier.

The Maremma was a natural consequence of Pininfarina’s early-’70s preoccupation with the idea of the luxury station wagon with sports/lifestyle overtones. The Peugeot 504 Riviera Break had garnered attention at the Paris Salon in ’1971 (but not enough to result in a commission), while a 1972 prototype estate version of the unlovely Fiat 132 barely merited a mention anywhere.

Undoubtedly, the Maremma would have been a stylish way of lifting the fortunes of Fiat’s accomplished but unpopular 130. The launch of the Coupé by Paolo Martin, in 1971 – complete with bigger 3.2-litre V6 and restyled cabin – had put a more positive spin on the model’s image. A shooting brake could have been a way of maintaining that momentum of goodwill towards a car that was widely admired but rarely bought.

Named after a coastal district of Tuscany, the Maremma made its debut at Geneva and then did the motor show circuit. It was featured on the cover of Quattroruote, posing on a Côte d’Azur beach. Pininfarina’s press release talks about the ‘commercial’ image of the traditional station wagon and the firm’s attempts to change that impression with this long, low-slung creation that was anything but most people’s idea of a utilitarian load-lugger. ‘The line of the car,’ says the blurb, ‘is lightened by huge glass surfaces which offer passengers the best visibility.’

The text goes on to explain how wind-tunnel tests resulted in the spoiler above the hatchback in the name of both stability and reducing the ‘tail swirls’ that tended to make for dirty rear windows. The panels and glass were identical to the production Coupé up to the B-pillar, which was covered by a broad stainless-steel trim. Aft of that point, the metalwork was unique but with production lights and bumpers.

What could so easily have ended up an incoherent mess is perhaps the most elegant two-door estate car ever, with a long roof that flowed into the previously mentioned spoiler. The adaptation was not the work of Paolo Martin but a 26-year-old called Lorenzo Ramaciotti, who had only joined Pininfarina two years earlier and went on to become group chief of design at Fiat Auto. At the following year’s Geneva Salon, Pininfarina presented the Opera, a four-door version of the Coupé that is also attributed to Ramaciotti and was supposedly intended as a replacement for the 130 saloon. First registered for road use on 11 April 1975, the Maremma was run by Agnelli for three years before he gave it to its current owner in September 1978. Then, other than an appearance at the Padua show in 2005, the Fiat disappeared for 35 years before going on display in Turin during 2013 at the Auto dell’Avvocato exhibition.

Since these photos were taken, the Maremma has been restored – although when we saw the car it was still a very sound, original and fully functioning vehicle. The third door, fabricated from a standard Coupé bootlid, rises on gas struts to reveal a huge and deeply carpeted load space accessible over a high sill. The rear seat folds, of course, but the opportunity to split the backrest 50:50 was not taken. The long doors mean that getting into the back is not a problem.

Inside, the dashboard, the padded-and-fluted headlining and the elegant door furniture are familiar 130 Coupé details, but the Maremma has a unique style of seat trim with blue plaid cloth centres – and pale Alcantara elsewhere – that gives the cabin a less regal atmosphere. Airconditioning was probably the most substantial 130 option and a virtual necessity in Italy, so it’s no surprise that the Maremma has it.

There is no suggestion that the Fiat is anything other than mechanically standard: in other words, 165bhp for lively but far from tyre-shredding performance. Given Agnelli’s reputation for aggressive driving, you might have expected to find a manual gearbox. Or perhaps his natural mistrust of automatics had mellowed by the age of 54? The Borg Warner three-speeder certainly suited the character of the 130 better than the ZF five-speed transmission.

It’s hard to say whether the Maremma was ever seriously considered for production. To be honest, by 1974 it was probably too late to save the 130 anyway. Loyal domestic buyers were proving doggedly resistant to the car’s thirst and size. Internationally, the big V6 Fiat – even in Coupé form – had failed to breach the snobappeal threshold in the face of opposition from BMW, Jaguar and all the rest.

There was a general feeling abroad, just a few years after the launch of the model, that the 130 should have been born a Lancia rather than a Fiat. By the time the Coupé was killed off in 1977, the group’s big-car ambitions had already refocused on the Gamma – a supposedly more rational front-drive concept that had a charm of its own but never quite recaptured the gravitas of the 130. It seems that Agnelli might have had similar thoughts on the subject. He is not credited with ever using a Gamma, although he must have cast a wistful eye over the Olgiata show car in 1982 – a shooting-brake version of the Gamma Coupé that owed a great deal to his much-loved Maremma, right down to the gold paint.