With excitement surrounding the launch of the 718 GTS 4.0 twins, we take time out to revisit the 2.5-litre turbocharged Cayman GTS… Words Dan Furr. Photography Dan Sherwood.

Last month, we used the launch of the new 718 Spyder 982 and GT4 982C as the catalyst for an Drive-My EN/UK dedicated to mid-engined marvels, with the centrepiece of the magazine being a rundown of the top twenty Porsche products swinging from the hip. From 356 No.1 to the new track-friendly six-cylinder twins, we charted the manufacturer’s long and distinguished history of producing groundbreaking sports cars featuring an amidships engine room, highlighting how the layout has been just as important to Porsche on and off the track as its more famous adoption of a rear-mounted powerplant.

As you’ll have already seen in Drive-My, the 718 GTS 4.0 982C models are now roaming free in the wild, offering a more civilised ride when compared to the Spyder and GT4. Don’t get us wrong, the new GTS models are perfectly capable of attacking the asphalt during track days at your favourite circuit, but they’re loaded a wealth of creature comforts and a slightly softer chassis, making them far easier Porsches to live with in all driving environments than either the Spyder or GT4. Granted, the more hardcore of the new six-cylinder 718s are intended to be used by drivers engaged in long days of track action on a regular basis, but unless buying to score questionable scene points, we’re struggling to see why those who spend the vast majority (or all) of their time on the public road would favour a GT4 over a GTS, especially when the latter is more than eleven grand cheaper than the former. It’s lighter, too, by about fifteen kilograms.

Those determined to buy a GT4 regardless of the fact they’re never going to hit a track are likely to be the same people guilty of dismissing the four-cylinder, turbocharged 718 Cayman GTS without ever driving one. “It has to a be a naturally aspirated flat-six,” they’ll say, citing rubbish about only a six-banger making for a purely Porsche sports car, failing miserably to acknowledge Porsche’s use of four-pot power from day one, long before the arrival of the 911. Then they’ll reference the noise. Ah yes, the noise, undoubtedly the most talked about aspect of the four-cylinder 718 lineup, serving to overshadow just how good these cars are.

Granted, a two-litre, entry-level 718 Boxster isn’t going to snarl like a cornered wolverine on a bad trip, but the 2.5-litre GTS? Revised airflow equipment delivers a beefier bark. Besides, if you’re inconsolable over the fact a turbocharged four-pot doesn’t sound like a naturally aspirated six-shooter, you could always upgrade the earlier GTS’s exhaust with a newer aftermarket system from any one of a number of tuners well aware of the value in producing pipework radically changing the noise from the car’s back end.

Porsche making naturally aspirated, six-cylinder GTS models available is almost certainly going to have a detrimental impact on the value of the older, four-cylinder turbocharged GTSs at a time a flood of them are expected to hit the used car market, a result of owners coming to the end of their Porsche Personal Contract Plan (PCP) finance arrangements from when the earliest examples rolled out of dealer showrooms.

This presents a fantastic opportunity to those of us who can appreciate the merits of a car beyond the noise it makes. Interested? You should be — the turbocharged 718 Cayman GTS offered outstanding value for money when compared to even the most basic 911 when new, delivering 360bhp (just five ponies less than the 991 Carrera 992), 317lb-ft torque, a top speed of 180mph and the dash to 62mph from rest in 4.3 seconds. That pace is on par with the entry-level 911, but would have relieved your purse for more than eighteen grand less, giving you plenty of spare change to plunder the Individual Equipment options list. In fact, you could have sent your boosted GTS for a trip to Porsche’s Colour to Sample paint shop, added an Alcantara interior package, Porsche Ceramic Composite Brakes (PCCB), ParkAssist cameras, seat heating, a seven-speed PDK transmission, a 20mm drop in ride height, Porsche Dynamic Light System Plus (PDLS+), gloss black painted exterior trim, automatically dimming mirrors, cruise control, twinzone automatic climate control, ISOFIX kiddie seat mounting points, aluminium pedals, painted headlight washer jets, black badges and still be quids in. Yes, really. Perhaps you don’t need rear seats after all?!

This is exactly the specification of our test 718 Cayman GTS, unique insofar as it’s finished in Maritime Blue, a colour made famous by the 944 S2 Cabriolet and 964 Carrera RS. It’s a beautifully built machine offering an exhilarating driving experience, enhanced by a raft of excellent standard features, including Porsche Active Suspension Management (PASM) and Porsche Torque Vectoring (PTV) accompanied by a mechanically locking rear differential. There’s Sport Chrono, identified by the tell-tale dash-mounted stopwatch and coming with the nifty Porsche Track Precision App, allowing lap times to be measured via GPS, as well as recording driving data and allowing it to be managed via smartphone. Twenty-inch 991 Carrera S 992 wheels are stock items, as are four-piston calipers clamping 330mm discs.

A handy dial fixed to the steering wheel allows you to select between Normal, Sport, Sport Plus and Individual driving modes, with buttons on the centre console allowing you to override aspects of each mode’s settings, such as the annoying start-stop functionality or, as we suspect the majority of owners choose to do, keep the car’s twin-tract sports exhaust system on full blare. Ah, we’re back to that controversial sound again, aren’t we? Well, contrary to popular belief, the noise the GTS makes as its hammering its way through the rev range, reaching peak power at 6,500rpm and making use of maximum torque between 2,100rpm and 5,000rpm, isn’t all that bad. We accept the aural experience of sports car driving is part of the fun, but there’s really not a lot to complain about when it comes to the turbocharged GTS. It’s not necessarily a ‘worse’ sound than a six-pot at full chat, it’s just… different. Besides, there’s more than enough of a sensational driving experience to ensure you spend your time in a 2.5-litre GTS grinning from ear to ear regardless of the din it generates.

The mid-engined layout ensures the chassis reacts instantly to driver input. To that end, precise, sharp changes of direction are realised by the superb Electromechanical Direct steering (with variable ratio and steering pulse generator), which does a great job of making you feel like a key component of the host GTS. Too often in modern sports cars, there’s a disconnect between the driver and what the car is doing, as though he or she is simply along for the ride, rather than dictating what’s happening. Not so in a turbocharged 718 Cayman GTS. The car feels supremely agile, incredibly lively and desperate to please by observing every instruction with instantaneous execution. The dual-clutch PDK gearbox in our test car — standard kit is a six-speed manual — shifts as seamlessly and as sublimely as everyone you’ve ever spoken to about the system would have you believe, with only a change in engine note (stand down, flat-six fans) and an altered dash display indicating you’re working your way through all seven cogs. Of course, being a semi-automatic, you can override what the car’s doing by taking control of the paddle shifters attached to the chunky 360mm GT Sports steering wheel, which further emphasises the GTS’s credentials as a Porsche just as at home on track days as it is commuting (helped massively by those large luggage areas located front and back). Alcantara covering the car’s glovebox, the centres of the two-way electric sports seats, centre arm rest, headlining and door handles achieves the same effect, giving furniture a luxurious, soft-touch feel, with a nod to the material’s use in motorsport applications for more practical purposes, including anti-glare of dashboards, even though the GTS’s top roll is finished in black leather. It would have been nice to see this wrapped in the suedelike material, especially considering the addition of an Alcantara upgrade to the cabin cost an extra £1,242 at the original point of sale.

The mix of black leather (with Crayon double stitching) and dark Alcantara give the GTS’s cockpit a suitably moody feel, which is carried over to the car’s exterior thanks to the inclusion of black casing for the headlights and smoked rear clusters. There’s black detailing on the reprofi led front and rear aprons, too. Less obvious alterations lurk within, including what Porsche describes as an “optimised” variable turbine technology (VTG) turbocharger, though it’s worth noting that even in the 345bhp 718 Cayman S, the same 2.5-litre lump isn’t exactly a slouch begging for extra punch. No matter, the GTS gets range-topping poke perfectly complementing the absolutely brilliant chassis, which feels super-light, but reassuringly planted, allowing you to hammer this ‘baby 911’ down any stretch of road you care to tackle, safe in the knowledge you’re in full control of a powerful Porsche that’ll instantly obey your every whim with class-leading precision.

The way this Cayman works its way towards the redline is also something to behold — the GTS is a fantastically quick car, its in-gear acceleration from 50mph to 75mph taking no more than 2.7 seconds. Its ability to dart out of a corner and immediately lunge forward, picking up speed at rapid pace, all the while remaining stuck like glue to the asphalt, should also be noted, not only for its potential for exciting B-road blasts, but for track day work in the hands of owners keen to use the aforementioned app to monitor lap times.

Best of all, none of these outrageous, 911-challenging qualities come at the expense of how accessible the GTS is. Put it this way, a driver new to sports cars could hop into the Cayman you see on the pages before you and be delighted with how easy they were able to achieve plenty of smiles to the mile. Similarly, experienced Porsche pilots will be thrilled at how reachable the full potential of this car really is.

It would be discourteous of us to make light of the importance of Porsche’s decision to reintroduce naturally aspirated six-cylinder engines to the 718 range, but to dismiss the plus points of the outgoing GTS would be equally churlish. We can’t think of a single reason why we wouldn’t buy one, and neither should you. Just don’t get hung up about the noise.

Below: Potent performance, perfect proportions, fabulous looks and generous luggage space both ends. Facing page: Black leather, Alcantara and a smattering of carbon make for a luxury cabin with race car influence. Below: Seven-speed PDK gearbox is a cost option, with a manual six-speed being the default transmission choice. 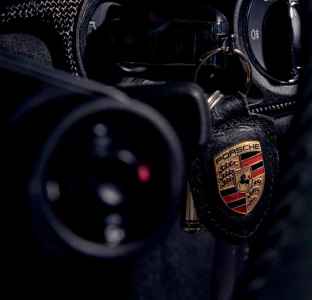 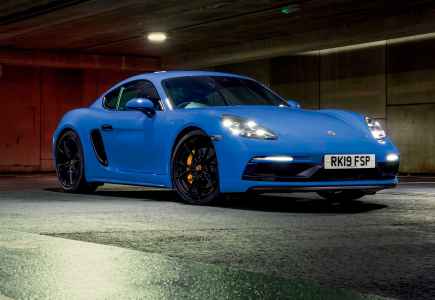 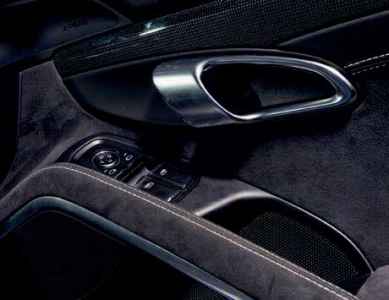 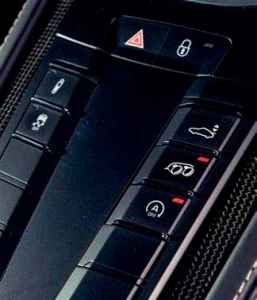 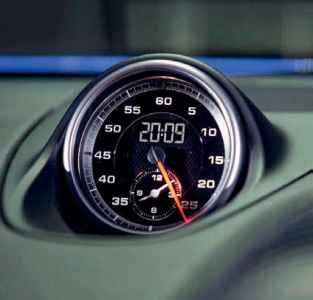 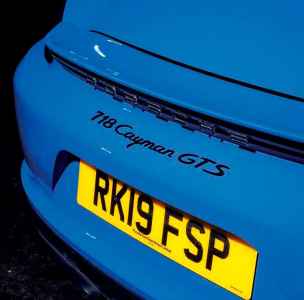 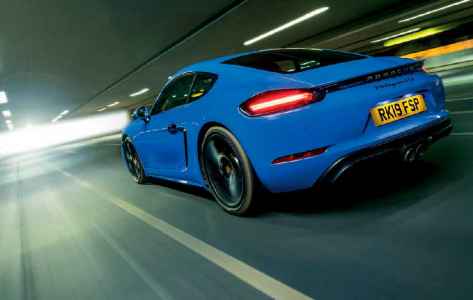 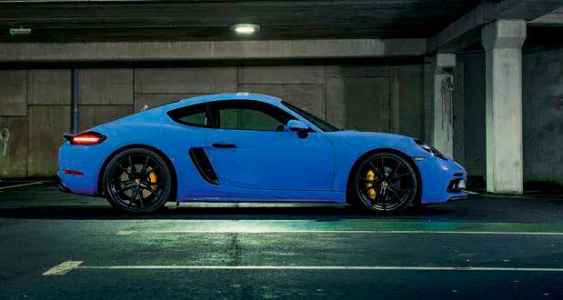 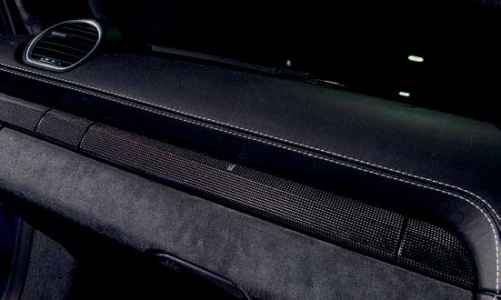 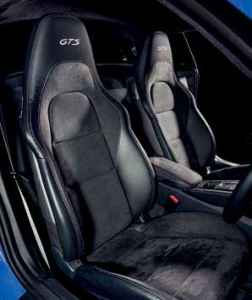 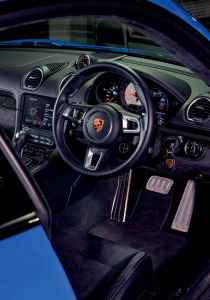 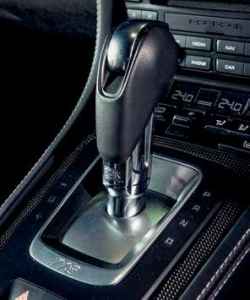 The 718 Boxster was introduced at the 2016 Geneva Motor Show, with the 718 Cayman revealed at the Beijing Motor Show four months later. Two-litre and 2.5-litre turbocharged flat-four engines were unveiled, the latter reserved for the Boxster/Cayman S and more powerful derivatives in later production, including the 718 GTS models, launched in October 2017.

Above Remarkably quick with amazing handling thanks to optimised turbo, mid-engine layout and superb chassis. Facing page The turbocharged Porsche without a Turbo badge, unlike the manufacturer’s all-electric Taycan, which, er, features a Turbo badge.

When Porsche ditched six-cylinder engines from the Boxster-Cayman line-up, the 718 model name was introduced in reference to the Targa Florio-winning four-cylinder 718 race car. The idea was to promote Porsche’s ability to produce small-displacement, lightweight sports cars able to beat bigger-engined, more powerful machines through superior manoeuvrability.