Tracking down a 1969 ‘Queen Mother’ Our man Scanlan remembers how he once owned the ‘Queen Mother of Ferraris’. Now he’s tracked down the very example he used to own and finds it still has a regal aura. Story by Tom Scanlan. Photography by Michael Ward.

Considering that the designer of the Ferrari 365 GT 2+2 was no less a figure than Aldo Brovarone of Pininfarina – the man who famously penned the Dino at around the same time – it’s a tad surprising that Ferrari’s flagship model of the late 1960s has had such a bad rap. A contemporary Road & Track road test called the 365 GT 2+2, somewhat disparagingly, “the Queen Mother of Ferraris”. Admittedly, it was an enormous car, measuring 16ft 4in (nearly five metres) from bumper to bumper, and it was very heavy, too, at almost 1500kg. The fact that it was also the first Ferrari ever to have power steering made it too decadent for some purists (although have you ever struggled at the helm of a Daytona?).

The model was launched at the 1967 Paris Motor Show to replace the 330 GT 2+2. It kept the same 2650mm wheelbase but had wider front and rear tracks. Multiply 365 (the swept volume of each cylinder) by 12 and you get 4390cc, the capacity of the Colombo-designed 60-degree V12 engine. With a single overhead camshaft for each bank of cylinders plus three twin-choke Weber 40DFI/5 downdraught carburettors, the result was 320hp at 6600rpm and acceleration from 0-60 mph in 7.2 seconds – not bad for such a big machine.

The new suspension was self-levelling, Ferrari and Koni working together on a system that aimed to keep the back end well located and comfortable. The self-levelling units (situated aft of the coil springs) built up hydraulic pressure through ups and downs in the road surface, that pressure then being automatically deployed to keep it all level. This was, of course, important in a car that might have had either zero extra weight in the back and boot, or a couple of portly adults and their luggage. The handling and ride were remarkably good for such a big, fast car in that period. And the 365 GT 2+2 certainly didn’t lack showroom appeal: some 800 were sold from 1967 to 1971.

“Whip up the horses in third gear to get that mad intoxicating howl, red-lining at 6600rpm, up over 90mph”

In 1984, when I was looking to buy a 365 GT 2+2, the car’s Queen Mother nickname didn’t put me off, and neither did the fact that it had air conditioning. The car I was interested in lived in England but I was on a posting to Hong Kong. I didn't care and bought it based on trusting the owner's honest description and a couple of photos he sent me. £10,500 later, the car was delivered to my dad's house in south London and, with a loud roar (as my non-driving, non-car-owning father described it), it was driven into his empty garage. Two months later, back in the UK on leave, I couldn’t wait to start her up and go for a drive.

‘My’ Ferrari’s first owner, exactly 50 years ago, was an eye surgeon in the Midlands, named Evans; he registered it with his own number plate that started ‘EYE’. It then passed on to Jack Durlacher, who was Rob Walker’s partner in the latter’s privateer Formula 1 racing team and financed the Lotus 49 in which Jo Siffert won the 1968 British Grand Prix at Brands Hatch — the last-ever Grand Prix win by a non-works team. After a couple more custodians, eventually the car became mine.

I was soon heading off on a holiday in Germany; would I be able to get anywhere near the claimed top speed of 152mph? In my dreams! I would be taking my wife and three young kids along. First drive, then: ignition on, switch on the electric fuel pump (auxiliary to the mechanical pump), depress the pedal three times, turn the key, musical starter cranking sound and then, oh my gosh, that noise! Carefully heading out onto London’s streets, I noted the power-assisted steering: not exactly fingertip-light but handy enough in a big car with fat Michelin tyres. I soon learnt that the Ferrari was not some temperamental racehorse, but a perfectly easy-mannered machine calmly waiting for the right moment to perform.

The ZF power steering impressed me: it was so easy to park and manoeuvre at low speed for such a hefty machine, and yet there was still all the feeling you wanted at higher speeds on twisty roads and even on long, sweeping autobahns.

As I went on that first drive, I made sure to get the feel of the five-speed gearbox, position the mirrors, be able to find the indicators, electric window controls, all the usual things you need to do in a 'new' car. That didn't take long and I soon got to a road where I knew I could really boot it. Oh wow! There can be few better noises than a Ferrari V12 really wound up, especially if you're the one inside, even if only for a few seconds in a London postal area.

Over the next four years, the Ferrari was brilliant transport whenever I could get back to the UK on leave. The highlight was a drive to friends living on the other side of Munich, taking in the Oldtimer meeting at the Nürburgring on the way back. There is something special about parking your classic Ferrari alongside all sorts of other wonderful old cars at the ’Ring. Germany offered plenty of opportunity to give the Ferrari her head.

Joining one autobahn from another meant you could really whip up the prancing horses in third gear and get that mad, intoxicating howl as you red-lined it at 6600rpm, up over 90mph; then up into fourth, at which point my wife would tell me, not too politely, to take it easy. The 100-litre fuel tank meant you didn’t have to refuel every day, even when averaging 15mpg.

During four years and 4000 miles, the Ferrari behaved impeccably. Almost. The electric fuel pump failed late on a Friday afternoon in Germany but was fixed overnight by the Turkish proprietor of a garage that, happily, hadn't yet shut for the weekend; he lent me his Jaguar to get us to our immediate destination 30 miles away. The window winder motor failed, too, but there was an emergency winding key supplied: handy, except that it took about a hundred turns to get the window up or down. Finally I had to have the clutch done at Maranello Concessionaires.

After my four-year tenure, I sold it for £15,500 – at the time, about the price of a new top-of-the-line Ford Sierra – and that covered every penny I had spent on fuel, insurance, clutch and fuel pump. Huge fun at no cost – and a truly great grand touring experience. Six months after I sold the car, Enzo Ferrari died. Within a year, V12-engined Ferraris had become the speculative bubble of the 1980s. So the story went at the time, a Japanese ice cream magnate bought a 250 GTO for £8 million and had it mounted on the wall of his office. Even humble 365 GT 2+2s were on sale for more than £120,000, an absurd amount at the time.

So it was ‘ciao’ from me and ‘ciao’ from the man I sold the car to, Geoff Cooper. Did Geoff immediately sell the QM and make a cool 100 grand? No. In fact, he still owns the car today.

Geoff says that, for the first 20 years or so, it was off the road more than on. In that time, the clutch died at Brands Hatch (Geoff’s local circuit); he realised the work was beyond his own capabilities and that he had to get professional help for this and, bit by bit and over a long period of time, the gearbox, suspension and body all received expensive restoration work. In the case of the body, rotting sills led to a three-year rebuild. The car has had a total repaint and the extensive micro-blistering has long gone.

“It was perfect after that and still is today,” says Geoff. Since that early period in his ownership, the Ferrari has given him a great trip to Le Mans, when 750 miles were covered at an average of 12mpg. A ‘slight’ problem arose at Calais on the return journey: part of the exhaust got torn off over a road bump. This rang a bell with me, because something similar (although not so dramatic) occurred when I drove up the ferry ramp at Dover myself in 1985 — the tailpipes seemed at some point to have been set too low and I can still hear the horrible and rather embarrassing graunching noise as they scraped the ramp. However, says Geoff, “It was an easy fix”.

The Ferrari has visited some spectacular places. Blenheim Palace was the location for a family wedding; the Supercar Siege event at Leeds Castle saw it help to raise money for the Royal Navy and Royal Marines Children’s Fund; and in 2012, the car was number 964 in a successful Guinness World Record for the number of Ferraris moving around a track at once (easily eclipsing the previous record set in Japan). Despite contemporary reports stating that 964 cars took part, Guinness’s own website says the total was 944. No matter, Geoff’s car is still a record breaker.

The car had for some time been a reluctant starter and Silverstone had nearly been a non-starter as a result. It turned out that the alternator needed a rebuild and Geoff took the opportunity to install a new, torquier starter motor.

“All was well until I received an invitation to exhibit at the Classic Car show at the Excel Centre in London,” explains Geoff. “I had probably had about three sets of keys made in 28 years, but it’s always been a bit stiff and fiddly. I arrived outside the show at the allotted time and waited my turn to go in – at which point, the ignition key broke in the lock.

What a time for this to happen! Luckily, the key had turned its full cycle so the steering was not locked up. We still had battery power and a bump start got us going and, at the end of the show, out again.” The ignition lock was duly stripped out and rebuilt.

“Yes, ‘Queen Mother’ is a perfect description,” Geoff reckons. “We also call it our fourth child – it’s definitely a part of the family.” Long may the QM reign and, as she enters her second half-century, I wonder what her fate might be in 2069? 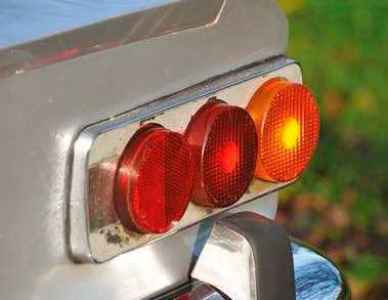 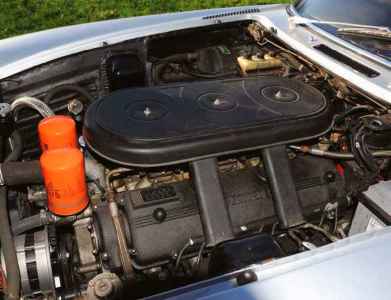 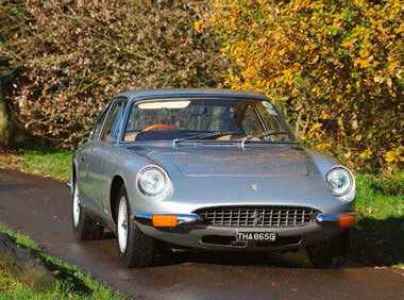 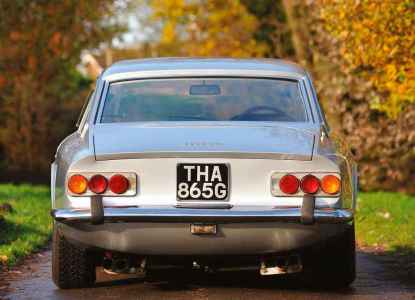 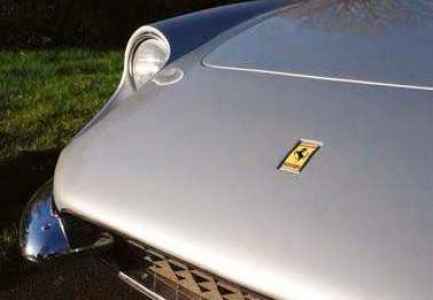 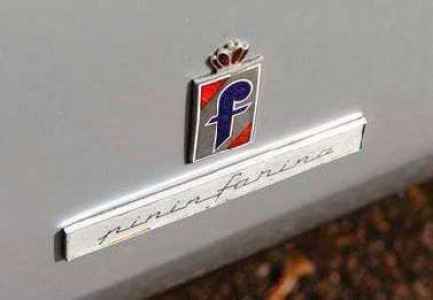 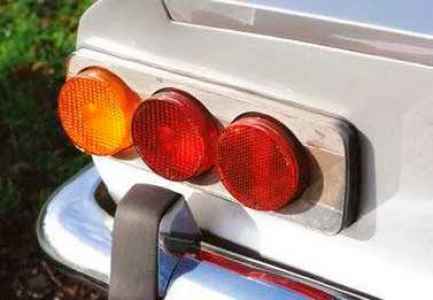 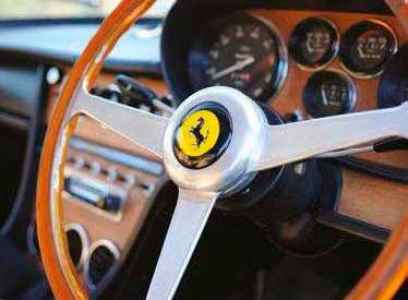 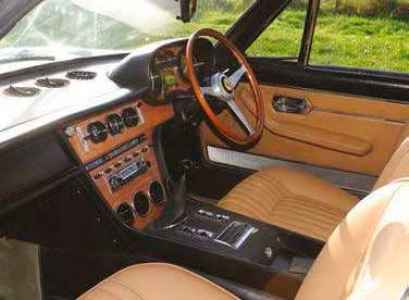 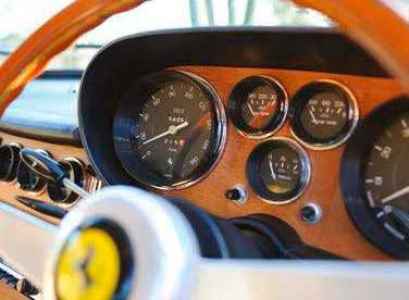 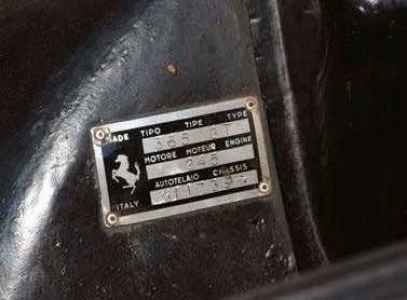 This was a huge, heavy car in 1969 but doesn’t feel so unwieldy today. There really is something very special about a Ferrari V12.

Yep, another beautiful Ferrari. Thanks Jeff B