Lancia Flaminia Coupe - Elegance by Pinin Farina. Pinin Farina’s take on the stately Flaminia was a paragon of understated grand touring elegance. Underappreciated in period, we think it deserves better as a classic – here’s why. Story by Martin Buckley. Photography by Michael Ward.

Of the Lancia Flaminia family, it is the Touring and Zagato-bodied cars that capture the imaginations of collectors and connoisseurs mostly keenly – and rightly so. They are the rarest and most glamorous of the Flaminia family; cars with an aura of jewel-like sophistication that cemented engineering finesse above profit margins. All they really lacked was power. With no more than 150hp even in later 2.8-litre form, these alloy-bodied Flaminias were brisk rather than truly quick, even by the standards of the early 1960s.

But like most Lancias of the classic era, the Flaminia was never about straight-line speed. Instead, the superb roadholding and feeling of balance in a car that steered and stopped beautifully gave the driver full confidence to exploit the outer margins of its capabilities, thus covering ground more quickly overall than he might do in a bigger-engined but ultimately less composed vehicle.

These were great cars for mature, wealthy individuals with nothing to prove, people who recognised the image of refinement and usable performance the Flaminia embodied. But in the final analysis, Flaminias were hugely expensive and rather unworldly vehicles that proved difficult sell: just over 3000 Touring and Zagato variants were sold from 1959-1967, which says it all.

The Flaminia's uncompromisingly purist approach found a more commercially successful home in the Pinin Farina-bodied Coupe, introduced in late 1958 for the 1959 model year, alongside the Touring GT and Zagato Sport. The shape was very clearly developed from Farina's Florida II concept of 1957 but used a 12cm shorter wheelbase, which was unique to this model. It also did without the pillarless side windows and hidden, rear-hinged back doors of the show car.

Although still subject to considerable hand finishing, Pinin Farina's Coupe was one of the first products from the coachbuilder to be made in its new modern industrial plant at Grugliasco. The Flaminia Coupe was also one of the firm’s landmark shapes, the influence of its simple boxy, architectural simplicity being recognisable many years later in cars like the Lancia Gamma Coupe and Peugeot 604.

This two-door, mostly steel-bodied full four-seater was by far the most successful variant of Flaminia commercially speaking: through to 1967, this handsome, practical car sold 5284 examples, outselling even the factory saloon by 1341 units. The first 3200 examples of the PF Coupe had 2.5-litre engines with a single carburettor, 'Sport' camshaft and higher compression ratio, unleashing 119hp, some 17hp more than the saloon’s engine. All but the first few examples had Dunlop disc brakes all round. A floor-mounted gear lever was standard, as were leather seats (although cloth was available as an option).

These cars could be optioned with electric windows (I've never seen one though) and Farina pioneered an electro-magnetic catch on the front seat back rests, which released when the doors were opened. With cutouts for rear passengers’ knees, the Pinin Farina Coupe was really a two-door saloon in character; those who pined for the leaner and more athletic appeal of the Aurelia B20 GT where pointed towards the Touring and Zagato-bodied Flaminias.

The Farina cars were the only Flaminias built in significant quantities with right-hand drive. When they arrived in the UK in 1960, the PF Coupe was priced at £3866, while the Touring and Zagato cars were 'special order' in Britain at £3918 and £3783 respectively. To give some context to this, a Jaguar XK150 was about £2000 at the time, although it is worth noting that the Flaminia was a bargain compared to the Ferrari 250GT at £6000 or Mercedes-Benz 300SL W198 at £5000.

‘Our’ car was supplied new in Milan and its right-handedness harks back to a tradition of Lancia's coming only in RHD, even for the home market. In fact, left-hand drive was not introduced until the mid-1950s by the Lancia factory and there remained an attitude abroad among some customers that a 'real' Lancia had to be a right-hooker. The car’s first owner, a wealthy publisher called Paolo Sangioneti, was evidently of that mind-set. He bought the car new in 1960 and it remained within the family until the early 2000s.

“There was an attitude that a ‘real’ Lancia had to be a right-hooker. The car’s first owner was of that mind-set”

Its Grigio Albany paintwork was refreshed some time ago but the glorious Pelle Marrone leather is original. Open the long doors and hop over the deep sill and take your place on the broad, somewhat shapeless seats. The steering wheel is huge; the big pedals emerge from the toe board, with only a narrow tunnel for the propshaft. The dash features the same dinner plate-sized Jaeger instruments and rather anonymous twist/pull switchgear to be found right across the Flaminia family. The dual heater boxes look a bit exposed under the dash, fed by left and right-hand ducting, each side with its own fan.

The under-dash handbrake is a hefty lever that works on the inboard rear discs (there is a hatch cut into the boot floor to give access to the callipers) and a tap on the floor next to the drivers seat is for the 1.75-gallon fuel reserve. Originally the Coupe came with carpets in the rear and profiled rubber mats in the front, although UK cars tended to have front carpets made for them on arrival, as local buyers struggled to accept the austere, if practical, rubber floor covering. Under the front-hinged bonnet, the V6 sits well back in the engine bay, with the battery mounted forward of the radiator (with its thermostatic shutters) to keep it cool. You have to remove the hefty stainless steel front grille to remove it.

With a touch of choke, the engine fires up willingly. To a certain extent the smoothness and flexibility of this pushrod V6 make up for the lack of raw urge in this 3300lb four-seater. A top speed of 106mph was good but nothing special.

The Coupe is designed to be driven smoothly, with a lively, versatile third gear in a firmly precise gearbox. You can potter in traffic as low as 10mph in third, then accelerate smoothly up to 70mph, pulling silkily to 5500rpm with only the whine of the alloy fan to indicate how hard you are pushing. This is a testimony to the rightness of the single-carburettor set-up; the later 3B cars, even in 2775cc form, showed only marginal gains in acceleration at the cost of low-speed flexibility.

The gear lever is a pleasure to use, and while you can see that good power steering might have given the Flaminia an extra dimension of low-speed agility, there is something satisfying about the smooth mechanical precision of the helm once underway that assistance might spoil. The Flaminia feels hefty and solid on the road but does not wallow or float, riding with a light touch on its tall, skinny Michelin X tyres. It has precise, slop-free steering with neutral characteristics, belying its four-plus turns between locks. The brakes are strong and reassuring.

This may not be a road-burner but it has the brisk, refined dignified character of a 2.0-litre Bristol. Compared to Lancia’s previous Aurelia B20, you can see how some thought the Flaminia too suave and smooth for its own good, particularly as the Aurelia was already well on the way to becoming a legend, even while the Flaminia range was still in production.

In truth, it wasn't to misty-eyed Aurelia enthusiasts that the Flaminia needed to appeal to but rather to those people who were looking to Mercedes for a grand coupe. The problem with the Flaminia was that it was a car that looked 1960s but drove 1950s; a physical car to drive with its manual steering and gears compared to the self-shifting and easy-to-park Mercedes-Benz 220SE and its successors. With the finer points of the big Lancia's engineering, build quality and driver appeal lost on most buyers, it’s easy to see how the Flaminia's fate was sealed by the success of the six-pot Mercedes Coupes, which were (arguably) equally pretty and (again, arguably) just as nicely built.

Although its ‘banger’ period is well behind it, the Flaminia Coupe remains a slightly difficult car to pigeon-hole some 60 years on from its birth, tending to invite unfavourable comparisons with the B20 because it has no particular competition pedigree. Others point to its visual similarity to various Peugeot and BMC vehicles, or the fact that all manner of much less noble grand touring cars will go faster or do this, that or the other 'better'.

And yet, for all that, this handsome, practical and beautifully wrought Lancia is a car apart. Those who appreciate such things will doubtless find the £32,000 being asked for this example is not unreasonable. 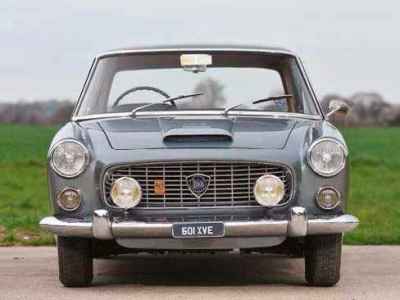 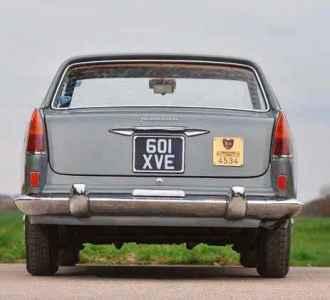 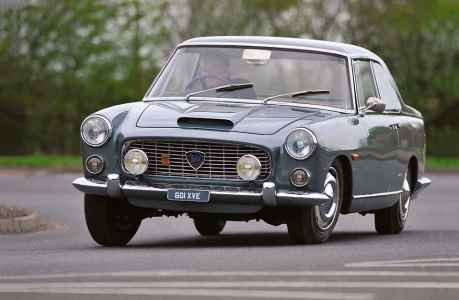 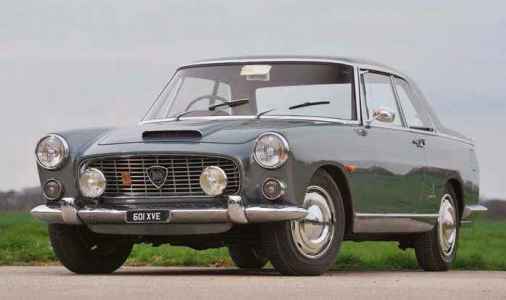 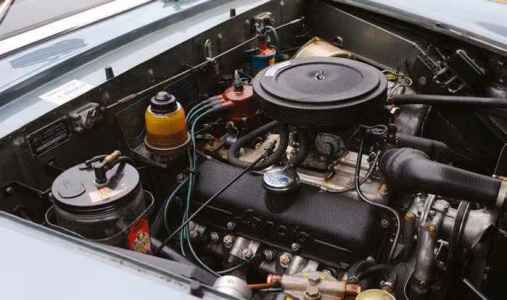 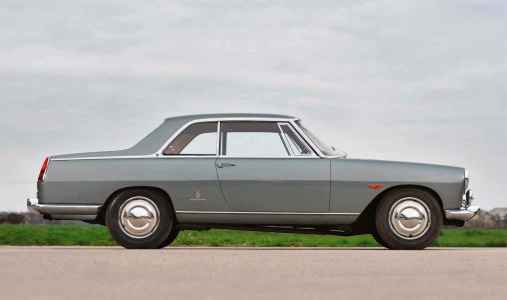 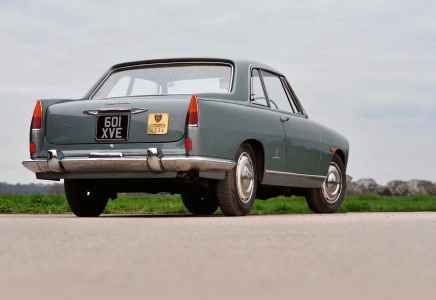 Too subtle for its own good? Perhaps, but the shape remains a paragon of taste and elegance

BRAKES: Dunlop discs all round