Made famous by Alén and coveted by all, the Fiat-Abarth 131 Rally still shines. Words Richard Heseltine. Photography Manuel Portugal.

Flat-out in a rare roadgoing 131 Abarth, spawned by the three-time WRC king

The backdrop screams ‘urban cool’, if by that you mean there’s lots of concrete, graffiti and a couple of characters who either want to hug you or stab you. Unfortunately, the road has no surface as such, just massive potholes between stretches of vegetation sprouting out of the asphalt, and you don’t want to drop a Campagnolo in a crater. ‘Our’ Fiat-Abarth 131 Rally is highly prized, and highly strung with it. You nail the throttle and channel your inner Markku. The first run results in a bravura display of semi-controlled drifting. Next time through the battery light flickers just as you boot it out of a bend. The revs die and it understeers like a wayward shopping trolley, the driver’s seat offering surprisingly little by way of lateral support despite appearances to the contrary.

A third ends much the same, as does the fourth. Time was when this was a car for heroes. Autocar labelled it: ‘A strange mixture of the clever, the brash, and the sophisticated.’ That was in 1977, and the description still fits.

‘With another 100bhp it would be a different story. Nevertheless, the 131 remains a challenge to drive smoothly’

The funny thing is, the car that initially was to have replaced the 124 Abarth Sport as Fiat’s rally weapon of choice in the latter half of the 1970s was the X1/9. Developed by Abarth, by then a fully-fledged subsidiary of Fiat, the prototipo competition variant made its debut on the Giro di Sicilia in March 1974, only to retire with transmission failure. Nevertheless, it showed well elsewhere. Subcontractor Bertone was then tasked with gearing-up for the production of road cars in order to appease homologation requirements, and all that was left was for Fiat’s management to rubber-stamp the scheme.

Instead, it axed it. The suits in Turin reasoned that its newest WRC weapon should be based on a saloon car. The net result of this was the resignation of competitions manager, Gino Macaluso, and instructions to start again. Strictly speaking, however, Abarth had already built a 131-based machine, the experimental SE031, which boasted steroidal bodywork and a 3.5-litre V6 engine. The new rally 131 would not be so powered for a variety of reasons, not least Fiat management’s insistence that the Abarth-ised version be broadly identifiable with the mass produced Fiat 131. That meant a four-banger, the chosen unit being a long-stroke, dry-sump, fuel-injected twin-cam unit with a cast-iron block and an aluminium 16-valve head.

‘The two-spoke wheel, with exposed screws and Abarth logo in the centre, offers a racer reference point’

Several suspension designs were trialled, including a beam rear axle and a de Dion set-up. What finally emerged from this Darwinian approach was an independent MacPherson strut arrangement, the front end being akin to the regular 131, albeit suitably beefed up. Physically, the bodyshell might have looked much like the mainstream production model with a few aerodynamic aids, but only the inner structure was carried over. The front panel, front and rear wings, bonnet and bootlid were fashioned from glassfibre, while the doors were skinned in aluminium. A rollcage and a latticework of tubular steel linking the front struts afforded additional rigidity. In prototype form, the 131 Abarth won first time out on the Rally delle Valli Piacentine in December 1975, with Fulvio Bacchelli at the helm alongside Bruno Scabini.

With homologation paperwork in place by April ’1976, the definitive Group 4 131 Abarth was blooded on the Elba Rally in Italy. Markku Alén claimed the honours. Maurizio Verini then emerged victorious on the ECRTulip Rally and the Rally di San Giacomo. Later that year, Alén won the 1000 Lakes (he would do so again for Fiat in 1979 and ’1980), this successful partial season flowering into a sustained attack on the WRC for 1977, at the end of which the factory Fiat and Lancia teams merged.

The works 131s contested every round bar the Safari, with Alén being joined by fellow Finns Timo Mäkinen, Simo Lampinen, Timo Salonen, plus Tarmac specialists Jean-Claude Andruet and Bernard Darniche, Bacchelli and Walter Röhrl. The net result was victory in five of the 10 rounds contested by the team, plus Manufacturers’ title honours ahead of Ford by a scant four points. In 1978 it was same story, with the factory squad racking up five WRC wins and a second Manufacturers’ gong.

In 1979, the first year of the World Drivers’ Championship, Fiat chose to reduce its works bid in favour of assisting independent teams, often in the European Rally Championship (six drivers won as many rounds). Not only that, but Seat also homologated its own badge-engineered variant. In 1980, the works Fiat squad returned to prominence and sealed a third Manufacturers’ title, while Röhrl claimed the first of his two Drivers’ crowns. Heading into 1981, the factory equipe contested only five rounds, with Alén victorious in Portugal.

The plug was pulled at the end of the year, the model having accrued 18 wins in six seasons. As for the roadgoing variant, it wasn’t as far removed from its competition-rooted sibling as you might imagine. For starters, cars came equipped with non-synchro gearboxes, although dealers could supply full-synchro units if you asked. As for how many cars were made, that rather depends on whose estimates you credit. Homologation requirements dictated 400 cars, and nobody can agree on how many of those were sold in stradale (road) trim. Some insist that as many as 608 were made of all kinds. Whatever the truth, it’s a rare beast.

A 131 Abarth cost £8500 in basic form (that’s around £52,000 in today’s money). The Lampredi twin-cam unit produced as much as 240bhp in competition specification, but a ‘mere’ 140bhp at 6400rpm in road trim. And that was with only a single Weber 34ADF carburettor. Autocar figured a car in period: John Miles recorded a 0-60mph time of 7.2 secs, and a top speed of 112mph against the factory’s claim of 118mph. The magazine went on to praise its mid-range performance after covering 40-60mph in third gear in just 3.3 secs.

Which brings us to today, and a hot autumnal day in Lisbon. ‘Our’ 1977 example appears striking in its oh-so-period hue of Rosso Arancio. Bertone appeared to have conceived the makeover with the aid of a blunt pencil and a set square, the spoiler in place with downthrust in mind rather than lowering the drag coefficient. The once-proud styling house was also responsible for the initial assembly of each car, before they were dispatched to the main 131 facility in Rivalta for completion. The boxed arches, there to cover the 195/50 x 15in Pirelli rubber, and that deep snowplough-cum-front spoiler and quartet of Cibié headlights lend it a confrontational attitude, even if the scoops sited on the bonnet and just ahead of the rear wheelarches are blanked off.

The cabin, meanwhile, is largely carried over from the standard 131 Mirafiori, right down to the clock (weirdly, there’s no oil-pressure gauge). It’s a symphony of plastic and nylon – and inelegant with it. That said, the two-spoke steering wheel, with its exposed screwheads and Abarth scorpion logo in the centre boss, offers a welcome racer reference point. The same is true of the drilled pedals, but little else suggests ‘motorsport’. Then there are the bucket seats, which look fab with their orange go-faster stripes. They are not particularly comfortable, though. Miles wrote in Autocar: ‘The seats look inviting – so inviting – but they are among the most wretched I have ever come across.’

Battery issues aside, the 131 is fun to drive. Or at least it is once you’re free of cityscapes and stop-start traffic. The Fiat has rather a lumpy idle and accordingly is a little truculent at low revs, moving in jerks and judders until it hooks up. Given free rein and enough space, though, it accelerates cleanly and it is suitably vocal. It isn’t particularly tuneful, mind, until it’s approaching 6000prm. Then it sounds joyous, all pop and fizz and bluster. By modern standards, however, it doesn’t feel particularly fast, but there is joy to be reaped from keeping the throttle buried. That said, you do need to carefully time your gearshifts, if only between second and third. Don’t be tempted to ram home the changes because it won’t thank you for it.

The anti-roll bars at each end are clearly at their loosest here, and the Fiat leans heavily through corners – but this doesn’t seem to upset grip levels. With the optional ZF limited-slip diff in place, it requires a degree of provocation to get the back out on smooth asphalt, but on the loose it’s a different story. The heft of the steering is surprising, quick-witted and accurate, but wind on the lock and it responds by piling on the weight. The three-and-a-half turns from lock to lock mean you twirl the wheel more than expected, but it’s part of what you might euphemistically call an immersive experience.

The middle pedal needs a good prod, but the discs set-up works well, if a bit all or nothing. This isn’t quite the wild child preconceptions might have you believe. With another 100bhp it would be a different story. Nevertheless, the 131 remains a challenge to drive smoothly; demanding but rewarding. You get back what you put in, the briefest of sorties tells you that.

The sad part is that Fiat never followed through. Once the 131’s frontline career ended, Fiat’s focus in rallying returned to Lancia. There have been sporadic comebacks for Fiat in recent years, but nothing particularly serious; no headline-grabbing homologation specials, no sexy halo cars. In period, the Fiat-Abarth 131 Rally made children of all ages go weak at the knees. And, to be honest, nothing has changed in the meantime. 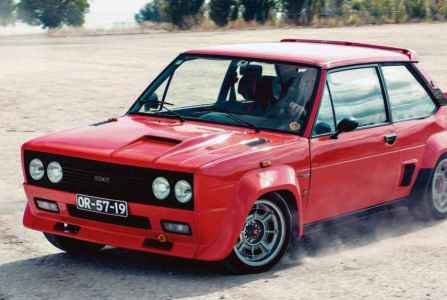 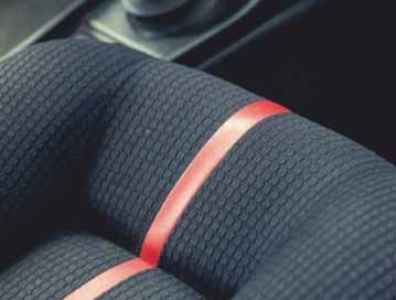 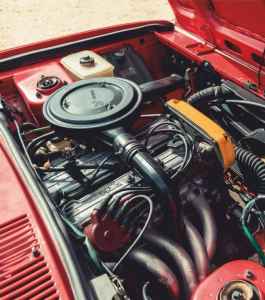 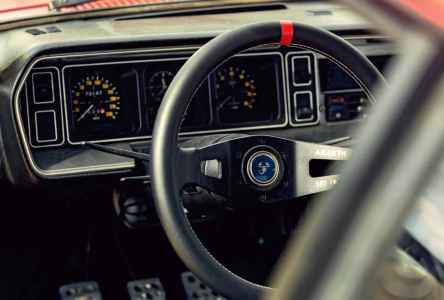 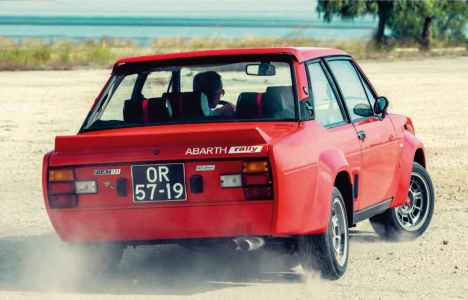 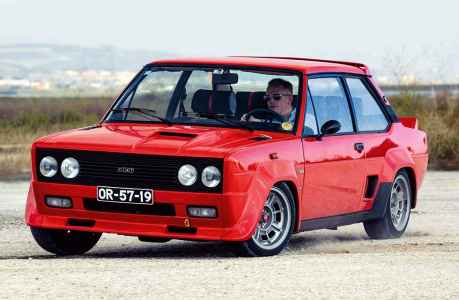 The 131 corners with a roll but offers plenty of grip. Below: torquey four-pot is 100bhp down on the rally variant. Orange stripe adds colour to an otherwise plain interior.

WHEN ABARTH LEANED ON LOCAL KNOWLEDGE

The Chequered Flag famously made the Lancia Stratos a winner in British rallying. Rather less well known is the London team’s contribution to honing the 131. Boss Graham Warner recalled in 2013: “Fiat asked us to run the 131 on selected British rallies in 1977. To my mind, we were recruited to act as an unofficial development team in the run-up to that year’s RAC Rally.

We went through the whole car and made recommendations, which ran to several pages, many of which were implemented. Not that we ever received any credit, you understand…”

Team regular Billy Coleman spent five days at the Abarth competition department in Turin prior to the event, but was unable to test the car on gravel. Nevertheless, he put in some competitive times early on in that year’s Welsh Rally, despite the loss of fifth gear. Coleman and David Richards would make amends a month later on the International Scottish Rally, claiming fourth place out of 159 entrants despite nagging problems. “Pirelli was on hand to offer assistance, with various combinations of tyre compounds being tested, ”Warner added. “The issue wasn’t with the rubber, it was the wheels: they kept breaking! Afterwards we switched from Campagnolos to stronger Minilites, which alleviated the problem.”

Having beaten Ford to the WRC title, Fiat descended on the RAC Rally armed with six 131s, with the Flag colours flying on those entered for Timo Mäkinen, Timo Salonen and Simo Lampinen. Warner said: “We demanded that since we had done a lot of work on the car, we should have our name on them.” Lampinen guided the first Fiat home in seventh place.