Classic - We’re behind the wheel on a race track to test out a modified R107 racer built by specialist SL Shop. Although an R107 450SL doesn’t seem like the obvious Mercedes track car, the guys at SL Shop have been working to change that theory, as we found out… Words David Sutherland. Images Steve Hall.

“It’s a working ambassador for the company and is likely to be seen at classic events, and can even be hired out for certain races by suitably licensed drivers”

The original 1952 Sport Leicht, the 300SL W198, was a purpose-built sports racing car that would only ever be driven in competition, but the road-going SL generation made 20 years later is almost the last car you would choose as the basis for a circuit racer. Bulky, heavy, soft in the chassis and with six- and eight-cylinder engines that prefer to spin at mid rather than peak revs, you would be making life difficult for yourself. In its heyday the R107 was to be seen at race meetings, but in the paddock, not on track.

All of which was of absolutely no concern to SL Shop, which has spent the last few years developing and honing the 1978 R107 450SL seen here into a tool for events ranging from track days to various historic racing classes. The Stratford-upon-Avon based classic Mercedes specialist was not the first to build a racing R107, that honour going to one Ian Jacobs a decade ago when he prepared and entered his eye-catching bathroom suite turquoise painted 450SL in race series for 1970s cars, but since then SL Shop boss Sam Bailey is, as far we know, the only man brave enough to take on the challenge in the UK.

“We started building it four or five years ago, it was just one of Sam’s regular R107s,” says Dan Griffin, technical wizard at SL Shop. “It was a standard car and the plan was to send it off to be built into a race car.” That proved to be a false start, because what came back was not to Dan’s, Sam’s or anyone else’s liking at SL Shop, so it was decided to start again and now the only race item left from that time is the roll cage.

“I decided to take things easy. But this is a car you can build confidence in quickly”

The engine that is now in the car is the third it has seen, and Dan says that it, with its adjustable rev limit (presently 6,500rpm), produces 270bhp at the wheels. There’s also a claimed 265lb ft torque, which as we’ll see later is at the heart of the car’s on-track character. At one stage a six-speed manual gearbox from a Toyota served, but that proved too fragile for the meaty M117 4.5-litre V8, the dent in the offside front wing made by fragments of exploding transmission evidence of that. It now has a six-speed manual box that SL Shop rustled up earlier.

The rules of the race series that the 450SL can enter, such as the Advantage Motorsport Future Classics series for 1970s and 80s cars, obviously allow a lot of scope for modifications, because much about the R107 is bespoke. The engine has special manifolds, the wiring is almost completely re-done, while the thunderous engine note tells us that the one off exhaust makes very economical use of baffling (nonetheless it’s within track day decibel limits). A Quaife limited-slip differential is fitted and chassis-wise, all the suspension has been upgraded, and is fully adjustable, and although the brakes retain standard calipers they have drilled discs and use Mintex race pads.

Unsurprisingly the car is now a very different animal to the one that arrived at SL Shop with an engine burning plenty of oil. “It’s so much better, and it’s been very reliable,” Dan comments.

But he also admits that now the major work is all but done, at least for the moment, he doesn’t really want to drive it to within an inch it its life, which is now its purpose. “I’ve got too much mechanical sympathy for that,” he tells us.

The driving is mainly done by Sam Bailey and his son Jake, who have already entered a few races in the recently developed SL, the 19-year old in particular proving pretty effective in attacking the kerbs. But on a quite cold, wet Donington Park track in early November it was time for me to take the wheel, and having known for several years that the car was being built, I was curious to say the least about how it would drive. As is frequently the case with race cars, the first obstacle is actually gaining entry. The roll cage bars reduce access to a small slot, reduced further up by the huge, wraparound head protectors of the Sparco race seat, whose position is of course fixed in position. But after an embarrasing amount of grunting and contorting, and aided by the suede-rimmed Momo steering wheel being removable, I was squeezed in, after which the full, multi-point race harness was tightened up for me, leaving me able to breath lightly but no more.

The interior is most un-Mercedes like, stripped bare apart from the dashboard, which now houses competition instruments, a rev counter in the centre position where the speedometer once was. There’s a plain centre console with basic switches including a master power on/off switch. No indicators, incidentally, which in this environment are clearly for wimps. The pedals are now a floor-hinged competition fixture. But the most striking impressions are the long manual gearstick jutting up, and just how low you sit, eye level to the parked wipers.

Not wishing to have to dip into the Racing Driver’s Book of Excuses to explain why I spun into the gravel on the first corner (“a rabbit ran on to the track” is quite handy for this occasion), I decided to take things easy.

But this is a car you can build confidence in quickly, not least because of the overflowing bread basket of low down torque. When Jake said you’ll only need third and fourth gears I couldn’t see how that would work, but it does, wheelspin probably possible in third in the wet. Donington Park near Derby is a fast, flowing circuit with no super tight hairpins, so third gear was fine for every corner, with fourth enough for the straights. The engine also sounds glorious in a way that only a V8 can when you feed in the power.

I am not a connoisseur of racing car chassis set up, but the 450SL, still on factory 14-inch ‘Mexican hat’ alloys, albeit one inch up in diameter from standard, seems very well balanced and also forgiving. The power steering felt normal and although my legs were folded and my feet not at the ideal angle in relation to the pedals, the brakes and clutch felt smooth, and even on the damp surface not once did I sense the tail to be light or twitchy enough to tip me off the track, and the car even rides not too harshly. When Jake later took me out for some demonstration hot laps I could still sense the SL’s forgiving nature from the passenger seat.

It’s a tough old beast too. The engine didn’t miss a beat essentially from nine to four on the track day, and nothing broke, even when a spin into the gravel (no names, no pack drill) necessitated the clearing out of the equivalent of a small garden rockery from the front lower wishbones.

ON THE ROAD AGAIN

The 450SL, which is likely to be made road legal soon thus increasing its scope, looks marvellous even when standing still. It isn’t simply a weekend indulgence for SL Shop father and son, it’s a working ambassador for the company and is likely to be seen at classic events, and can even be hired out for certain races by suitably licensed drivers. Hence great care has been taken over its appearance. The lustrous red paintwork is nicely enhanced by the broad silver strips on the bonnet and sides, and also by the contrasting white factory hardtop.

The perfect condition, satin finish wheels, hunkering into the wheelarches thanks to the lowered springs look the business too. Overall it’s a strangely stunning sight, the still demure R107 profile but with some carefully applied warpaint. This was definitely the queen of Donington Park that day, a glorious sight among the throng of lightly tuned hatchbacks, and attracting more attention than even the dayglo green Porsche 911 GT3 RS on track.

Mercedes-Benz never raced the R107 in period, and the sidebar in this feature explains why not. It would have been a wonderful sight mixing with the Jaguar XJs, Porsches, Ford Capris and big BMW coupes of the 1970s, and the SL Shop’s project allows us a flavour of what might have been. 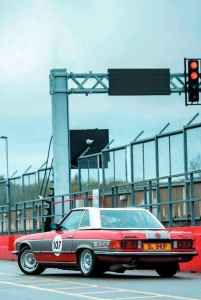 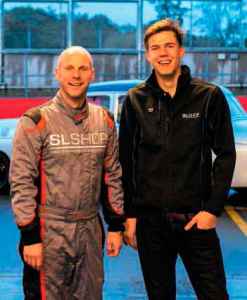 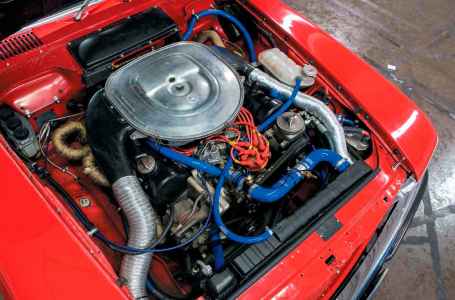 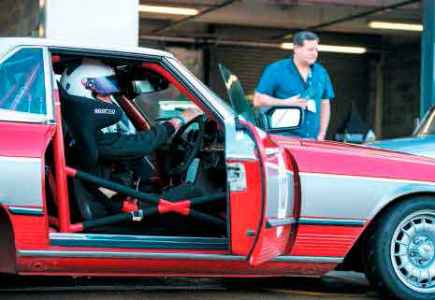 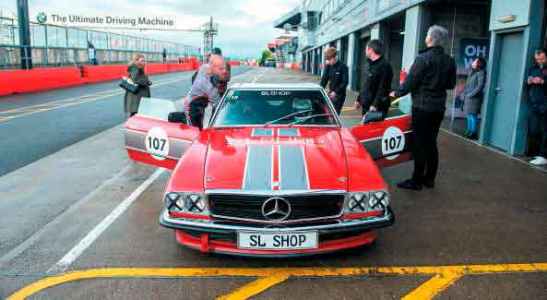 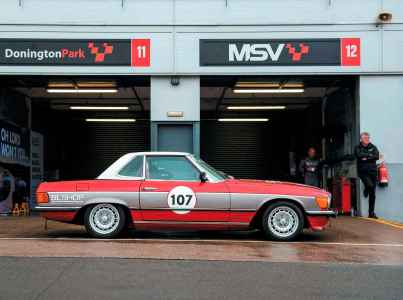 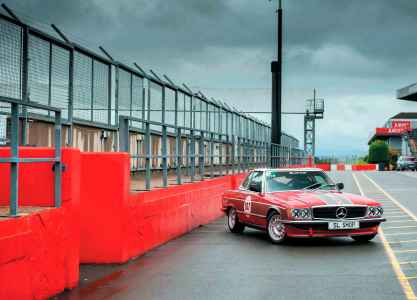 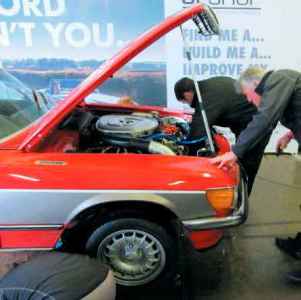 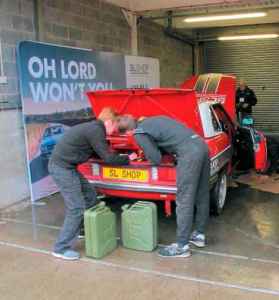 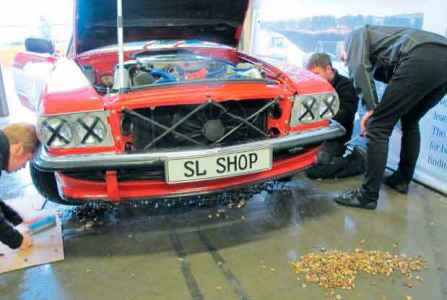 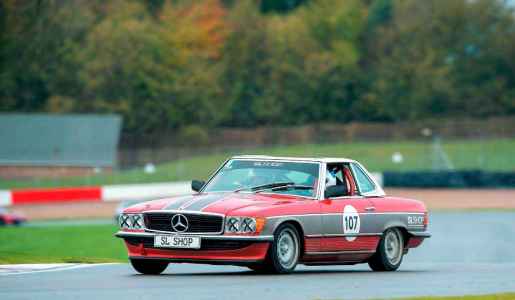 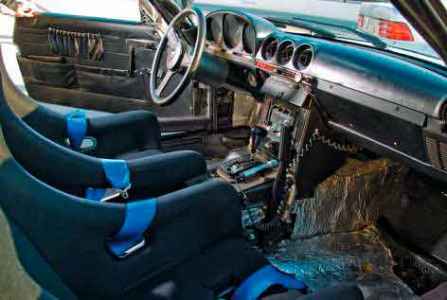 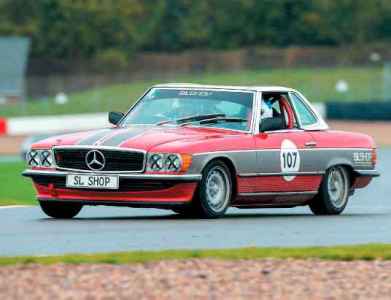 The interior is most un-Mercedes like, stripped bare apart from the dashboard. The car is checked over but remained reliable. A trip into the gravel trap meant cleaning. Re-fuelling the car was an involving process. Mercedes proved the SL could compete. The SL Shop’s Sam Bailey with his racing son Jake on the right. The interiors were far removed from the production cars. The big V8 provides good power on track. A team of people keep the car maintained. Access into the car is limited due to the cage. It’s unusual to see an SL as a devoted track car.

In the 1970s the sportiest Mercedes were the 107-series SL and SLC. That wasn’t saying much, the car’s bulk and weight hardly lending itself to motorsport. Nonetheless towards the end of the decade Mercedes, spurred on by legendary chief engineer Erich Waxenberger, decided to tackle top level rallying and made the 450SLC coupe its weapon of choice, entering first the standard 450SLC in 1978, and the specially built five-litre 450SLC 5.0 in 1979 and the similar 500SLC in 1979.

The results were mixed, but there were wins, aided by the sheer scale of Mercedes’ resources. In 1978’s 18,000-mile marathon Vuelta a la America del Sur, the factory fielded four cars, Andrew Cowan’s the winner, while the following year the 450SLC 5.0 filled the first four places in the Ivory Coast’s Bandama Rally. But by the end of 1980 Stuttgart mustered a mere fourth place in the World Rally Championship constructors’ league, and for 1981, by which time SLC production was running down, opted to switch to the R107 SL roadster with its shorter wheelbase and greater agility in search of improved results.

The 1980 WRC champion Walter Röhrl was signed to drive the 500SL, carrying over the SLC’s M117 V8 in uprated form. And that was the closest the R107 ever came to a factory entry. The plan had been to campaign the R107, named the 500SL Rallye and four of which were made, as an interim measure and later switch to the forthcoming 190E 2.3-16 W201 whose more compact size suggested much greater potential.

But then the original, turbocharged Audi Quattro happened, instantly rendering two-wheel drive rally cars uncompetitive. This led to Mercedes-Benz cancelling its WRC programme and re-focusing the hot 190E as a touring car racer. The still born 500SL Rallye has re-emerged in a Mercedes publicity role, taken by Mercedes-Benz Classic to various historic events.