Her name is Rio… and she is a very rare beast. Yet this Panther curio is one of two examples of the Triumph-based ‘mini Rolls-Royce’ in enthusiast Peter Mayo’s collection. Words Martin Buckley. Photography John Bradshaw.

Driving the luxurious Rio, a Dolomite in drag designed to appeal to the super-rich

The Panther Rio was a car made for a market that never really existed, and created around a concept that was based on a flawed argument. The reasoning was that, in the teeth of a recession or a fuel crisis, a small number of very wealthy people, wracked with guilt, would prefer to drive (or be driven in) a smaller, more economical and outwardly less ostentatious vehicle. But one that still had all of the fixtures and well-groomed feel of their regular full-sized, status-flaunting luxury saloons.

Moreover, these hand-wringing, socially conscious high-net-worth individuals would be quite prepared to be fleeced for up to £10,000 – or more than the price of a new V12 Jaguar or Daimler at 1975 prices – for such a vehicle. In the same way that a Radford Mini Cooper (or even a Vanden Plas Princess 1300) will always appeal to those who want leather-swaddled luxury in a small package, there was, perhaps, a certain logic here. Particularly in a United Kingdom that was suffering 24% inflation, had just given its coal miners a 35% pay rise and was taxing its wealthiest citizens (many of whom were heading for Switzerland) at up to 93%.

But while the Rio obviously didn’t have the chic of the Radford (or the limo-for-the-people image of the VdP), its fatal error was a failure to take into account that the very wealthy do not have to court the approbation of a scornful public – which presupposes that your average tycoon actually cared what the scornful public thought of them anyway. And even if the 24mpg Rio would do at least 10 more miles to a 1975 (72p) gallon than an XJ12 or a 450SEL W116, was your average tycoon/captain of industry/bloated plutocrat really bothered about saving £10 a week on their fuel bill?

The project, based on the Triumph Dolomite, was thus misconceived during the early ’70s Fuel Crisis by the normally astute Panther boss Robert Jankel and his co-director David Franks. The surprising success of the 1972 J72 and the ’1974 De Ville doubtless gave them the confidence to speculate that there were enough rich buyers on the lookout for something different: if nothing else, the Rio was certainly that.

But they also saw the Rio as a hedge against changing tastes; if the day came when buyers for dried up, it was felt that having a modern-looking car in the range could not do any harm.

There would be two versions: the 91bhp Rio was based on the standard eight-valve Dolomite 1850, the flagship 127bhp Rio Especial on the 16-valve Dolomite Sprint. Prices started at £7900 (three times the price of the humble Triumph it was based upon), rising to £8900 for the more powerful car. Options such as air-conditioning (£400) and an electric sunroof (£327) could soon bump up the invoice to the £10k mark. That was still £7000 adrift of a Silver Shadow, but with a drinks cabinet, fridge, television and leather headlining among the possible options, the final bill for a fully loaded Rio could have been comparably huge.

It was no Rolls-Royce, but the quality of the finish justified the cost to a certain extent (the Rio won a coachbuilding silver medal at Earls Court in 1975). This combined with a level of bespoke detail that included specially designed alloy wheels – shod with smaller, fatter Avon tyres – a leather-covered steering wheel, electric windows all round and Panther’s trademark ashtrays with built-in lighters, one for each door. Tinted glass, reversing and boot lights, an internally adjustable door mirror, a Radiomobile stereo and inertia-reel seatbelts were all part of the standard specification.

The manual Rios all had overdrive as standard, and thus equipped the 16-valve car was good for 109mph and 0-60mph in 9.7 secs, making it 3mph slower and just over a second adrift of the standard Dolomite Sprint, which was 250lb (113kg) lighter.

Commercial expectations for the Rio were not unreasonable: it was never seen as anything more than a niche product, selling at the rate of four per month alongside six J72s and one De Ville. It was to be built in the same Byfleet factory by the 100-strong Panther workforce, which was really a collective of half a dozen groups of independent craftsmen specialising in paintwork, trim, panel-beating and glass.

Working up the shape in full-sized silhouette, using thin-gauge wire, Jankel styled the Rio to be 4½in longer than the Dolomite (most of the extra length being in the rear), with a lower roofline. Panther bought in brand-new, fully road-legal Dolomites and removed all the outer panels, including the roof. Once they were stripped down to the bulkheads, the original steel panels were replaced with hand-formed aluminium – although it was thought that machine-pressed sections would be used if demand warranted it. Tight, regular panel gaps and deep, glossy paint (that spoke of many hand-rubbed-down coats) were to the same standard as the big Jaguar-based Panthers.

Even that was not enough to get momentum behind sales; within a year, Jankel’s thoughts on the theme of a higher-production Panther had moved on to the Vauxhall-based Lima. Initial hopes for the Rio were bolstered by the promise of a 100-car order from HR Owen. When that deal didn’t materialise, the car’s fate was sealed. It’s hard to get an accurate sense of when the last car was produced, but Mark Harrison – who worked at Panther in the ’70s – remembers a Rio being assembled as late as 1977 or ’1978: “It was put together by the De Ville team. I was doing inspections and testing and a blue left-hand-drive Rio came through, bound for Switzerland.”

For years it was believed that 38 Rios were produced but, once the penny dropped that Panther only issued every other chassis number, the final tally was established at just 18 cars. Five are thought to survive and Peter Mayo, press officer of the energetic Panther Car Club, owns two of them, as well as a De Ville, a Lima and a J72, which he freely admits is “probably the world’s worst-driving ’70s car”. He blames his Panther obsession on playing Top Trumps as a kid: they out-trumped most things on price, engine size and, in the case of the 8.2-litre Panther Six, even number of wheels.

Mayo’s black Especial automatic is thought to be the best of the surviving Rios. The second from last built, it was originally dark blue and sold new to the managing director of a firm in Leicester, who kept it until 1979. It went through various Panther Car Club members’ hands until Mayo bought it in 2018. A £12,000 bid finally persuaded its owner to part with the Rio, and Mayo has since spent a further £5000 getting it resprayed and having various niggles sorted. Meanwhile he bought himself a second Rio – the third from last built, a standard 1850 in Almond – from a lady in Carlisle who was still using it as her everyday car.

The Especial is the more dependable car at present. “The Almond Rio needs a bit more sorting, while I will do 50 miles in the black one,” says Mayo. “But only 50, because the first time I took it 51 miles it broke down!” There’s a certain logic in that.

On first sighting the Panther disguises its Dolomite origins quite well, although the glass area is a strong giveaway and the Ford Granada front lights are obvious once you have been told; likewise the Triumph TR6 rear lenses.

The doors shut with a substantial thump as you settle in to the well-stuffed seats, which are built on the Triumph frames but clad in fragrant Connolly leather. Their opulent bulk robs rear passengers of kneeroom that was not abundant to begin with: it’s hard to imagine a tycoon sitting here surveying the Financial Times.

The doorcards are trimmed in leather, as are the steering-column surround and the top of the dashboard, but the general shape and instrumentation of the fascia are pure Dolomite – albeit with the familiar dials set in glossy burr walnut to match the door cappings. The pleasingly executed leather-covered centre console features Series 2 Jag XJ6 pushbutton switchgear, a deeply recessed handbrake and 420G/Daimler limousine electric-window controls. The manual choke looks very British Leyland poverty-spec parts bin, but the remote filler-cap release is a posh ‘coachbuilt’ touch.

The Borg-Warner automatic transmission suits the character of the Rio, with gearchanges that are as smooth as you could reasonably wish for. The engine has strong mid-range torque and revs eagerly if not very musically. The lasting impression is that the much-touted extra sound-deadening really does its job, with engine, road and suspension noise suppressed to a level likely unknown in this size of car at the time.

There is no power steering and the Rio doesn’t need it, the pleasingly thick-rimmed bespoke wheel giving light, faithful control over the front wheels, with the bonus of a handily tight lock. Panther tweaked the camber and toe-in settings on the front suspension to give the handling a less nervous feel than the standard car; a stock Dolly Sprint remains a gap in my education, so I can’t offer any comparisons, but I suspect that the Rio is a softer drive with a more substantial feel on the road.

It would be pointless to pretend that this discreetly good-looking, quietly distinguished semi-hand-built saloon did not deserve its fate. That said, in the tiny sub-genre of ‘ordinary cars tarted-up to be something they are not’ (I’m thinking of the Monteverdi Sierra, mainly) it is one of the better, more memorable efforts.

Best of all, the Rio is the antithesis of its neoclassic siblings, the De Ville and J72. Those eccentric, handbuilt oddities channelled the style and spirit of the great glamour cars of the ’30s, yet were very much about the freewheeling flamboyance of the 1970s, summoning up (for me at least) an anachronistic world of top-shelf glamour. Somehow, when I think of a De Ville I have a vision of a semi-clad lady ‘road testing’ the cocktail bar rather than any particular detail of the car itself. The Rio, in contrast, was Panther showing its sensible side: somehow, it’s hard to picture a Penthouse or Mayfair centre-spread road test of a Rio sandwiched between naked vacuuming with Mary Millington and Readers’ wives, which can only be a good thing. 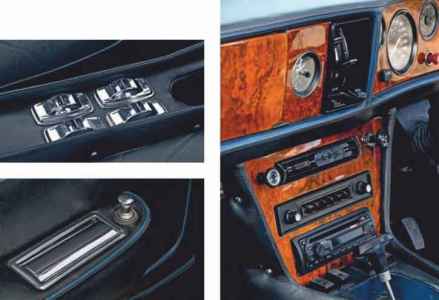 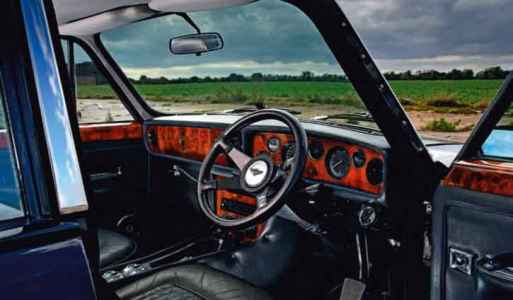 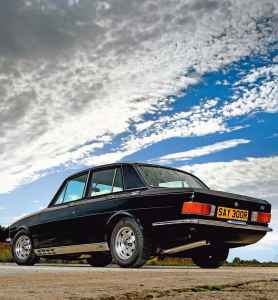 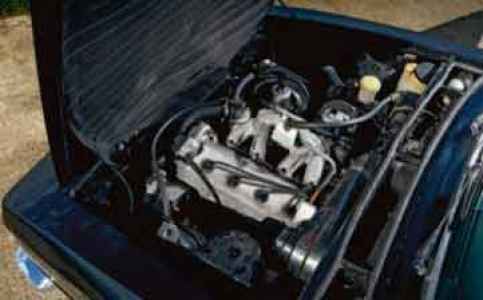 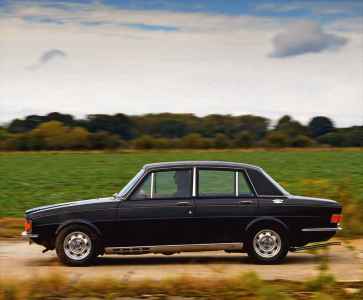 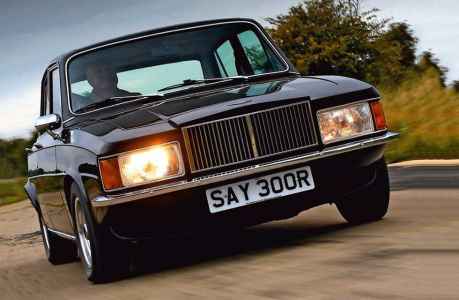 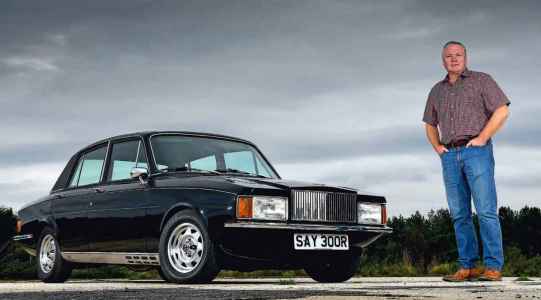 Dolomite origins can be spotted, but cabin finish is superb. Right: walnut adds luxury (stereo is a later addition) Ashtrays with built-in lighters are a Panther signature. Above: Jaguar electric window switches

Robert Jankel’s Panther Westwinds (later Panther Cars) built some of the world’s wackiest motoring creations; these are the ‘production’ cars – which means that more than one was made!