THE MASERATI THAT NEVER WAS

These two Touring-bodied Maserati 3500 GT convertibles are clearly different generations with different personalities, as they spring from points five years apart in the same model line’s career. See them together, and the way the flowing lines of the (red) Series One by Touring Superleggera evolved into the (ivory) Series Two makes sense. But there is a complication.

Officially, Touring never made a Maserati 3500 GT Convertible, these cars are unicorns. Of the Series One, all that existed were three prototypes. Of the notional Series Two there were, in total... well, none actually. Until now.

Uncomplicating the matter is itself complicated, the simple part first: Touring had a critical connection with the Maserati 3500, a coupe far more important to Maserati than any post-war soft-top. By the mid-1950s, having been burned in a non-automotive Argentine venture, Maserati was awash with debt. So, with an envious eye towards the profitable sideline in street machinery developing at nearby racing rival Ferrari, Maserati decided it was time for its first real production road car.

Granted, Maserati had tentatively danced in that general direction, but what it needed was a cash-spinner, not a few racers-in-mufti sold to selected friends. So it aimed instead at the executive-express segment, with a 3.5-litre twin-cam six derived from the 350S sports-racer placed in the usual tube frame and dressed in cost-effective foreign componentry. Rat meant British suspension (from Alford & Alder, creator of the ubiquitous and versatile Triumph Herald upright), British brakes, German steering and gearbox, and optional American air-conditioning (Maserati was an unsung pioneer of exotic cars’ air-con).

It would be a comfortable, quick, CEO-grade coupe called the 3500 GT. For bodywork, Maserati staged a design-off: Allemano and Touring reached the finals, and the contract ultimately went to Touring.

Re first customer units arrived in December 1957, and in all just under 2000 rolled out of Modena before the replacement Sebring arrived in 1964. It was Maseratis biggest-selling single model until the considerably more downmarket Biturbo arrived, and few would dispute its part in saving Maseratis bacon. So when the inevitable Convertible edition was mooted in 1958, Touring joined the bidding - and promptly lost out to Carrozzeria Vignale.

Maybe that was inevitable. Historically Maserati had rarely strayed from Torinese coachbuilders, and credit for Milan- based Touring’s shot at the 3500 Coupe usually goes to Franco Cornacchia, a Milanese Ferrari dealer so icy-cool he could also sell Maseratis, run a semi-works Maserati F1 team and Enzo could go whistle. Still, both Maserati lead engineer Giulio Alfieri and Touring lead designer Carlo ‘Cici’ Anderloni would insist, even long, long after the event, that corporate politics never influenced product decisions (ahem...), and many speculate that Maserati just wanted a more obviously ‘new’ look for the convertible, and Touring’s creation showed an obvious Coupe bloodline.

Or everything might simply have boiled down to economics. Vignale made major panels of ordinary steel, much cheaper than Touring’s acclaimed Superleggera method of lightweight alloy laboriously wrapped over a steel-tube skeleton, and production costs meant the world to a manufacturer sweating blood over every lira. Besides, the entire run of Vignale Convertibles amounted to only 250 or so cars, hardly a sniff of Touring’s coupe output, so what’s the big deal if Touring lost the 3500 Convertible gig?

To some Maserati connoisseurs, however, it became a deal of no small import. Among those was a particular European businessman and amateur racer whose classic enthusiasm started, he tells me, as a young man straight out of school, with ‘cars that weren’t classics, just old, secondhand cars’. He has a particular horror story about a Jaguar that cost more at the first breakdown than he spent buying it. But as his business and his budget grew, he developed a fondness for Maseratis, especially the open kind. Naturally he acquired a Vignale 3500. Which he rather liked, actually, until he compared it with photos of the Touring prototypes.

‘I looked at those pictures,’ he says, ‘and I thought, this is the car they should have built.’ So he sold the Vignale and went beating the bushes for an elusive open Touring, that was the late 1980s; a quarter of a century later he called the cause lost, with some justification. Of the three supposedly built, there’s doubt that one of them actually was. If it did exist, it probably got whacked early and scrapped, the other two changed hands seldom, quietly and in private.

So by 2013 our man had changed tack. After consultation with today’s incarnation of Carrozzeria Touring Superleggera, he commissioned the company to create a Touring 3500 Convertible from scratch. Which was apparently all it took for karma, at long last, to get involved, because the most historic of the original examples almost immediately came up for public auction, that was chassis 101-124, first sold to 1950s American Maserati racer and super-customer Temple Buell Jr, subsequently owned by heavyweight boxing champion Joe Lewis, and recently restored to concours level. Our hero snatched it up like a discounted papal indulgence.

But the entire from-scratch Touring Convertible idea still wouldn’t quite release the poor man from its grasp. ‘How about we make the car that never was, even as a prototype?’ he proposed to Touring, that would be a convertible version of a Maserati 3500 GTI, the revised and thoughtfully upgraded 3500 Coupe introduced in 1960 and a proper Series Two 3500, had Maserati only designated it as such. With Lucas injection instead of triple Webers (hence the ‘I’), front disc brakes replacing the GT’s drums, a fifth gearbox ratio and a standard limited-slip differential, the GTI really did move Maserati into a new era of motoring technology.

Construction of the unicorn GTI began in 2014 by de-roofing a Coupe - as with the original 1958 convertible - which means both these Touring convertibles have chassis numbers from the Coupe sequence. It wasn’t quite as straightforward as simply copying the ’58 modifications onto a GTI, though. Subtle coachwork changes had occurred between the GT and the GTI, from the longer nose through to the rear-quarter profile, ‘the entire windscreen and scuttle area is different,’ Andrea Dragoni, head of Touring’s Classics Department, tells me, ‘so it was a matter of fresh design and engineering, not just “cut and paste” from existing blueprints.’

More than one Superleggera coupe has been fatally mangled by earlier independent conversion attempts, and the total fabrication time for this one, including a ground-up restoration on the 1963 donor car, ran over two years. Along the way the owner decided to replace the marginal rear plus-two seats with storage compartments, because he intended the car for practical travelling, and after much deliberation with Touring’s design team he chose colours of handsome pale ivory for the bodywork and a two-tone green interior. ‘It’s not a standard combination,’ Andrea admits, ‘but was very popular on show cars in the period.’

As I stand by both cars, it’s the ivory-and-green that repeatedly steals my gaze, and I unconsciously gravitate to it when driving time arrives, the owner collects me up gently, however: ‘You should probably try that one first,’ he says, pointing me towards the red-over-beige 1958 original. Not that this is a hardship, mind; the car is a sensory delight from the second you slide through the door. Every interior detail is just so, from the sculpted gearknob to the cigar lighter, presented like a plinthed objet dart atop the dashboard.

Re driving position is comfy, too, for anyone versed in the traditional Italian ‘man-spreading around steering wheel’ technique. Re engine fires on first spin, clutch take-up is progressive and smooth, the shifting is light and precise as is the steering, and the ride quality is unexpectedly supple. Gentleman’s GT or not, it likes some revs and makes the proper noises to encourage them. Re performance might not be blinding but it’s definitely on the sporty side of GT, very lively and user-friendly. Particularly when compared later with a certain similar but ploddingly numb British machine with a cantankerous gearchange, also in the owner’s garage.

At first impression the 1963 variant would appear no more than a typical cosmetic makeover. Nothing major in the cockpit is different; just some changes in gauge detailing, switchgear location and the like (the switches, alas, are still infuriatingly unlabelled), and the driver’s seat feels higher and better-bucketed. Crank it up, though, and the transformation is a bona fide tribute to automotive evolution. Re Lucas mechanical fuel injection needs a proper warm-up, but thereafter it pulls cleanly where the Webers would bog down and finds torque no carburettors could possibly uncover.

Re engine responds smoothly to the throttle’s opening from as low as 1500rpm in fifth gear, and the improved tractability, the long-legged overdrive and the superior braking show their worth in every situation from tedious traffic crawls to proper fast Grand Touring. If the GT is in temperament and performance a 1950s design, the GTI has all the fundamentals of any modern performance car and looks the absolute business besides. You could surely do a brisk trade cranking out extra copies.

But you’d do it without our European businessman. ‘This was purely a work of passion,’ he says, ‘and there’s no profit motive involved here.’ In the end, I ask him, was it worth waiting a quarter of a century to have, finally, both what was and what never was? In reply, he merely smiles.

But it is a very big smile. 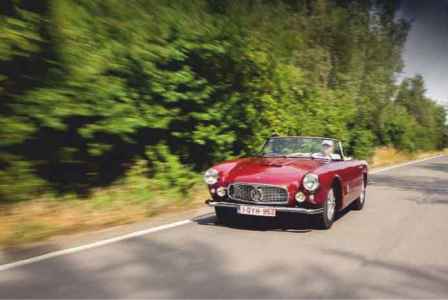 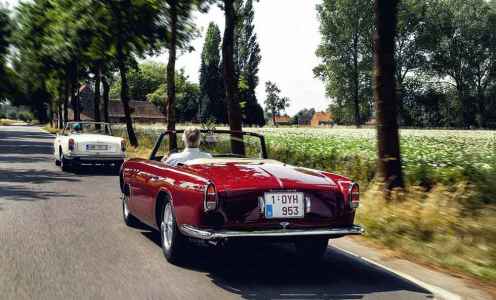 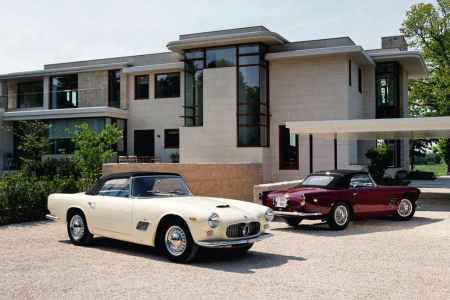 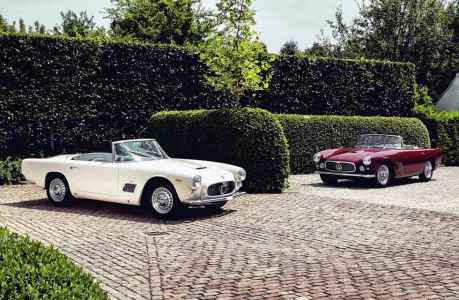 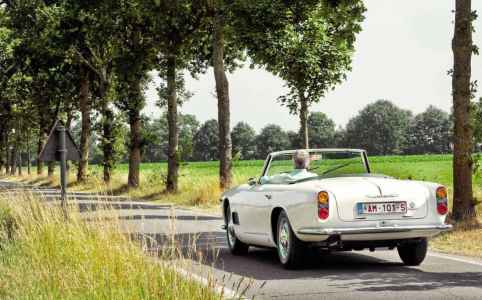 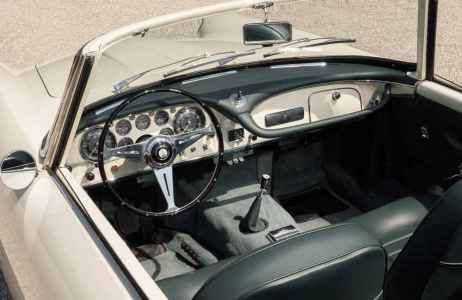 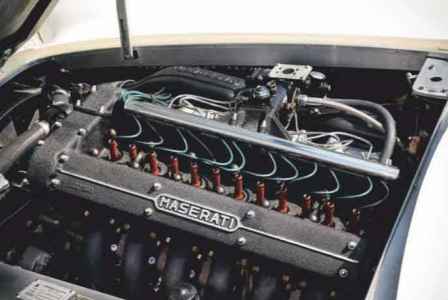 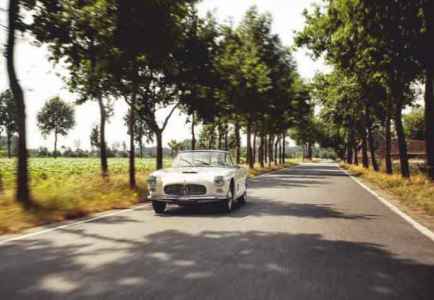 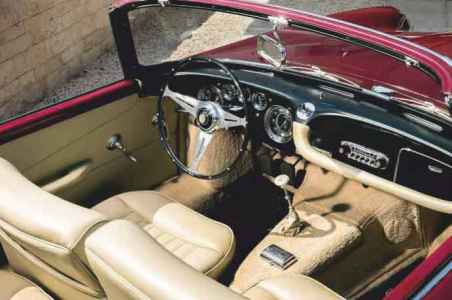 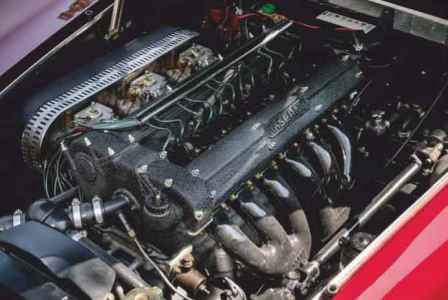 Above and facing page: The red car is one of only three 3500 GT Convertibles built by Touring before Maserati awarded production to Vignale. The ivory car doesn’t officially exist...