It is quite unlikely that the removable roof panel was a Porsche invention, but the ingenious if short-lived ʻsoftʼ rear screen was distinctly innovative. Words: Kieron Fennelly. Photos: Tom Gidden.

The soft-window Targa is something of a rarity – and a fascinating one, too.

The Targa, of course, came about because the 911 range lacked an open version, which even in a poor year had accounted for 20 per cent of 356 sales. First shown in 1965, the Targa concept with its tonneau-like roof cover, removable rear window and striking brushed steel hoop created a minor sensation: it seemed that Porsche had found a novel way of creating an open car.

However, it was over a year (December 1966) before production models started to appear: of the two removable panels the roof caused a problem at speed as air pressure caused it to bow upwards. In fact Porsche had intended to market an alternative hard roof, a sold plasticised panel, and so after more experimentation abandoned the tonneau top and made the hard panel standard.

In its first (half) year, 1967, Targas comprised 20 per cent of 911 sales and as the market place grew to accept them, this increased to over a third in model year 1968-1969, the traditional level for open 911s. It was in 1968 that Porsche made a further modification to the Targa top. The plastic rear window, clever as it seemed, would prove less than satisfactory in use: not only was it fiddly to fit, it was prone to shrinking once temperatures fell below about 10ºC, becoming impossible to assemble. It also allowed water ingress.

Porsche initially offered a fixed glass screen as an option before making this standard, abandoning the ʻsoft windowʼ completely for model year 1969-1970. This fixed window, besides being waterproof, had the advantage of making the rear bulkhead more rigid, but the abolition of the removable screen somewhat changed the character of the car, effectively depriving its occupants of the pure open-top motoring of a cabriolet.

The design group, led by Butzi Porsche, had never intended the coupé to be an open car. Indeed ʻFAʼ told Karl Ludwigsen that he had favoured a different tail design for an open car, but this possibility was not followed. Whereas the structure of the 356 allowed it to be produced as an open car, the 901 was from the outset designed to be a coupé, and Porscheʼs subsequent attempt at cutting the roof off produced prototypes so lacking in structural integrity that they sagged in the middle.

Further investigation was not encouraged by the signs emerging from America, and Ralph Naderʼs infamous book ʻUnsafe at any speed,ʼ that open cars might in any case be banned. However, sales chief Harald Wagner pointed to the yawning gap in the market that Porsche had left and which clearly opened the way for competitors Mercedes Benzʼs swish new ʻPagodaʼ 230 SL W113, which like the 901 was also launched in 1963. When seen in this light, the Targa was far more than a stop gap, more a brilliant innovation, and it was soon copied, by Fiat with the X1/9 and later by Ferrariʼs 308GTS. Indeed the Targa top was a defining feature of the 1969 Porsche 914. Harald Wagner takes the credit for thinking up the ʻTargaʼ name.

Mick Paceyʼs Export 56 is a well established pre-1973 specialist and it has recently restored an early Targa.These are now rare cars: reputedly slightly over 70 per cent of all Porsches built are still in existence, but this proportion varies. The first generation of 911s had only the very limited rust proofing available at the time and it is probable that fewer than half survive. The ʻsoft-windowʼ Targa was built only in 1967-8 and seemingly only in left-hand drive.

The restored Targa here is an ʻSʼ: it was first registered on 22nd June 1968 in Sicily, a connection which appeals to Mick Pacey as, of course, the Targa was named after the famous Sicilian road race, the Targa Florio.

Rather in the Italian tradition, and probably not unconnected with a wariness of the tax authorities, few details appear to have been recorded and only the original Italian log book accompanies the car. Porscheʼs Certificate of Authenticity states only chassis (11850087) and engine numbers. Over the next four decades this Targa had a second Sicilian owner until when, in 2010, it was sold to a Belgian collector.

Mick Pacey, who had been on the lookout for a softwindow Targa from 1968, alighted on the car in 2011. It was complete and roadworthy: €25,000 changed hands and Pacey drove the Targa back to Britain. ʻIn those days the Pound went rather further and if I fancied a 911, Iʼd buy it,ʼ he says. ʻIt was before early Porsches shot up in price and nobody was bothered about matching numbers or that sort of thing. It was disappointing the car had so little documented history, but it seemed sound if well used.ʼ

An important detail, missing from the sparse original paperwork, was the Targaʼs colour code. As acquired in Begium the 911 was ivory, however, once dismantling had begun, it was apparent that it had undergone several repaints, but there was no paint code listed in the documents. Mick Pacey knows, however, what he is looking for: eventually remnants of the original shade started to emerge, indicating that the car had left Zuffenhausen finished in Slate Grey with a red interior.

Bodily the Targa was in good shape, particularly the chassis longitudinals, rather confirming its four decades in the mostly dry and warm southern Mediterranean climate. Targas can suffer like any open car from rain ingress: the Belgian Gendarmerie purchased a batch of 911 2.4E Targas in 1973. Officers were delighted to be driving 911s, but when the rain came down (as anyone who has been to Spa knows) they couldnʼt get the roofs on quickly enough and the interiors suffered. Later 911s in Gendarmerie service were all coupés.

Mick Pacey, though, is an irredeemable Targa enthusiast, especially the soft window version: ʻIt not only looks beautiful but the interior stays cool in hot conditions.ʼ With the window in place the Targa design prevents much of the cabin wind disturbance of the classic fold-down hood.

Having no customer pressure to complete the project to a deadline, Export 56 had the relative luxury of being able to restore this particular 911 over several years. Reduced to its ʼshell, new metal in the floor and the wings resolved the limited effects of corrosion, but turning his attention to the engine, Mick was not entirely surprised to find that its number was 32 digits away from that listed on the Certificate of Authenticity, although it was the correct S engine, suggesting that the Targa had been re-engined at some point. As a matter of course, the flat-six was stripped and rebuilt from the ground up, including new barrels and pistons, camshafts and oil pump. The 901 five-speed, too, was refurbished, eliminating the baulking between certain ratios which Pacey had noticed on the drive from Belgium.

Suspension and brakes were all systematically renewed, the front beam reconstructed and the steering box overhauled. Export 56 then took the trouble to find the correct aluminium ʻSʼ calipers.

The Targaʼs Fuchs wheels had been chrome-plated at some point: a specialist took these back and then recreated the correct satin black finish on bare anodised aluminium. Export 56 undertook repainting the body itself and reassembled the interior with the correct red leatherette; the company has long sourced its interior fittings from Auto International in the US, which also provided the replacement plastic rear window – the task of recovering the seats was entrusted to a local upholsterer.

The Targa top makes this one of the more difficult 911s to restore to ex-factory condition, and also one of the more expensive: the roof panel involves several seals requiring painstaking fitting and they can cost almost £400 each. However, and as the photography shows, the result is effectively a stunning new soft-window 911 Targa. When he acquired this 911, Mick Pacey had intended to keep it, but the restoration process was somewhat staccato, interrupted by attention to more urgent jobs, and gradually his enthusiasm waned.

Then a client expressed an interest and he had every incentive to finish the project. ʻThe trouble is,ʼ he says, ʻas things have accelerated again, Iʼve regained all my old enthusiasm for this style of 911. And in fact when I started driving it and especially when we took out it for photography, it looked so wonderful on a sunny day that I fell in love with it: now I regret that I am committed to parting with it.ʼ

Very few early Targas came to Britain – only a handful of LHD cars were brought to the UK. Only in 1973 did AFN start importing significant quantities. After 1968, in any case, all Targas had the fixed glass rear window. Mick Pacey nevertheless wonders whether a RHD soft window 911S exists somewhere: he would love to get his hands on it – who knows, he might even keep it. 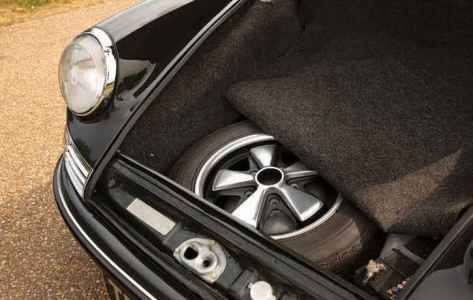 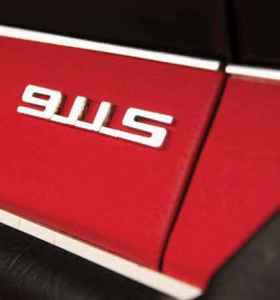 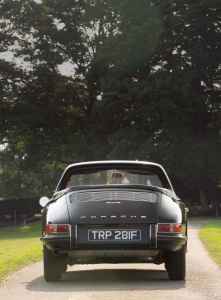 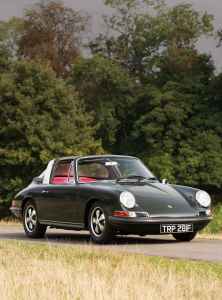 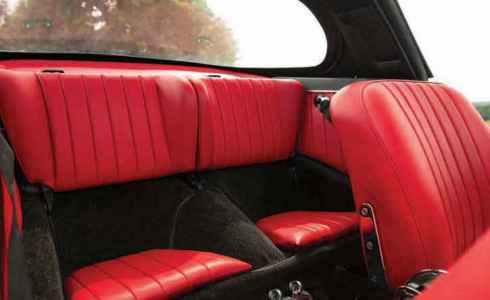 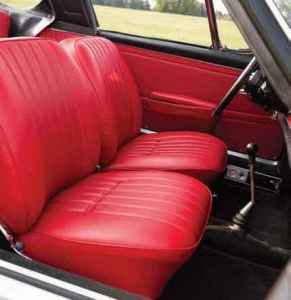 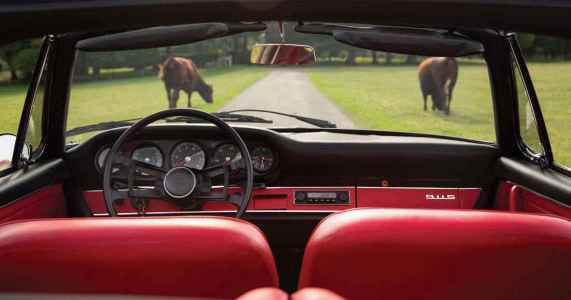 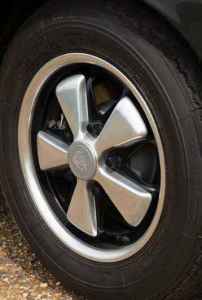 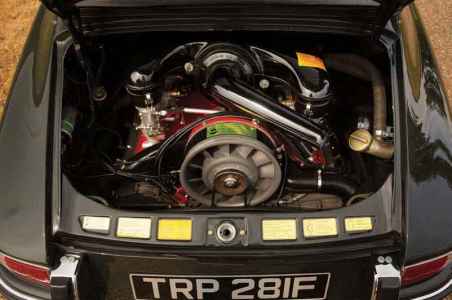 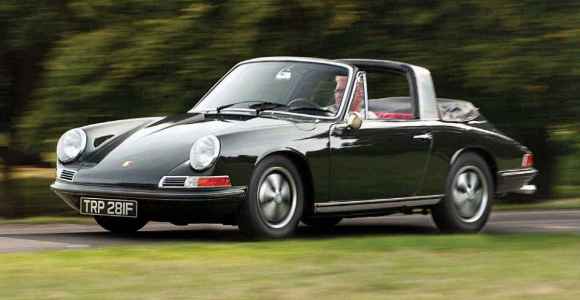 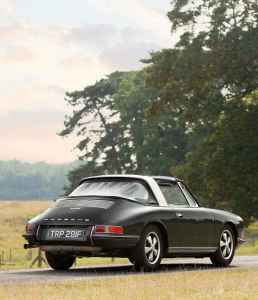 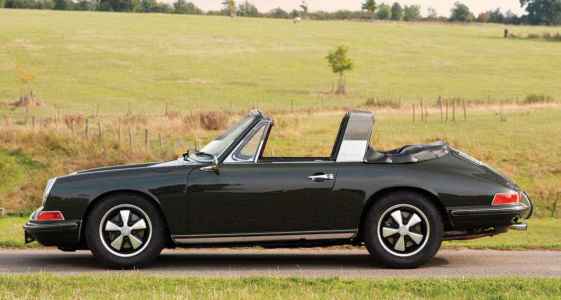 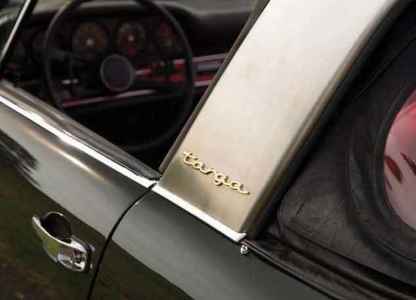 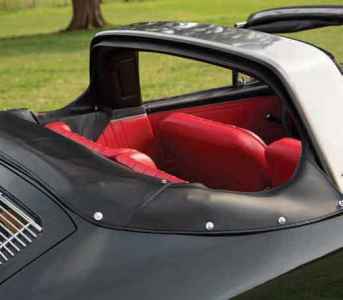 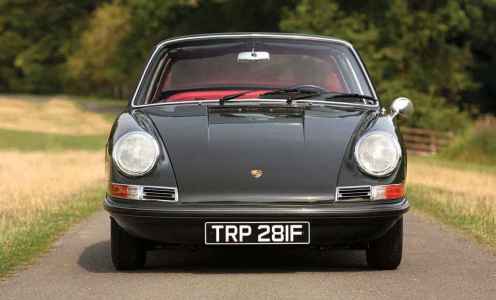 Above: In side profile, the soft-window Targa was as close to being a full cabriolet as you could get – only the signature roll-over bar breaks up the lines. Below right: Folded away and with cover secured in place, the zip-out rear window didn’t take up much room. Many soft-window Targas were later ‘updated’ with the installation of a glass rear window. Above: From the front, there’s little to give the game away that this is anything other than a regular 911, coupé or Targa. Below right: Full-sized spare wheel and tyre stole space from the fuel tank but was so much more practical than the later space-saver design! Below right: Red dashboard insert is striking… Above, left and right: Red interior is stunning, especially when contrasted with the Slate Grey exterior. Sitting in the rear seats with the window packed away must have been a thrill for the children! Below: The classic five-dial dashboard layout lasted relatively untouched through to the 993 series. It is a classic design but ergonomically not the most successful! Steering wheel tends to cut off view to the fuel gauge and clock. Above left: Fuchs wheels have been restored to the correct anodised aluminium and satin-black finish. Above right: Two-litre 911S engine pumps out 160bhp, more than enough to give this Targa a good turn of speed – in its day, it would have been a revelation. Below: For years the Targa was the poor relation in the 911 line-up, but in more recent times it has come to gain respect – particularly in soft-window format.

“THE CAR HAD LEFT ZUFFENHAUSEN FINISHED IN SLATE GREY…”