To look at it, you'd never know. What you see is surely a standard DB6 Mk2 Volante, white with red seats, the leather starting to get a bit damp because there's drizzle in the air and the roof is down. Not to worry; a blast from the heater will help dry it off. Hold that thought.

Looks, however, deceive. This piece of the past is a pointer to the future. Peer underneath and you'll see there are no exhaust pipes leading into the rear silencer, although two tailpipes emerge from it to maintain the correct visuals. Open the bonnet and you'll see not a cast- aluminium Marek straight-six but a large piece of aluminium sheet covering a mysterious black box of tricks with 'Danger - High Voltage' labelled on its side and some chunky wiring. Next to it is a small coolant tank.

That black box of tricks sits precisely on the original engine mounts. It contains an electric motor and its associated control units, plus a battery pack in front of it. The whole assemblage, reckons Paul Spires who runs Aston Martin's Works Service operation, weighs no more than the original powertrain, or in the case of this concept-proving pre-prototype, slightly less. 'Meet the heritage car that's 100 per cent guilt- free,' he says.

This DB6 is the first step in future-proofing classic Astons. From late next year Works will offer the fully developed version to customers as a conversion service on any Marek-straight-six-engined Aston, DB4 through to original DBS. The motor and battery unit form a self- contained 'cassette' that directly replaces the petrol engine. Crucially, the conversion is readily reversible: if you want to reinstate petrol power, it can be done in a couple of days. A couple more days will see it electrified again.

'What we're trying to achieve,' Paul explains, 'is a vehicle as rapid to 60mph as the original, or better, and to combine this with a range of 200km [124 miles]. But we don't want to destroy the car's provenance.

'We're very serious about heritage vehicles. We want to give them a life of maybe 100 or 200 years. This is a very responsible way for Aston Martin to go about looking after our heritage.'

The DB6 is charged up and ready to go. Is that the sort of thing we enthusiasts will be saying in years to come? In the absence of camshafts, carburettor settings and free-flow manifolds, with no oils to worry about, no agonising over the merits of a manual gearbox versus an auto, what will electroheads talk about when they can't be petrolheads any more?

Maybe there will be a subculture of torque-boosting motor rewindings, inverter current pulses, power spikes and control unit hacks. Maybe Facebook will be buzzing with the latest fast-charging device or a tweak to a regenerative braking calibration. Enthusiasts need this stuff. But right now, for all their efficiency and purity, electric motors are a bit boring.

So what motor is in the DB6? How does it compare to, say, a Tesla Model S's motor at one extreme or a Renault Zoe's at the other? Paul won't tell me, not least because the final Heritage EV cars (as they will be branded) will have a different, more powerful one. All he will say is that it's 'conventional' - already there is a convention in electric cars' motors - and that, in reply to my straw-clutching stab at asking something technical, it's a brushless motor. As they all are, nowadays.

Power, torque and the capacity of the lithium- ion batteries are similarly off-limits for now. Let's hope there's enough of the last of those to propel me for a few laps of the Millbrook test facility's sinuous hill route.

‘The black box sits precisely on the original engine mounts. This DB6 is the first step in future-proofing classic Astons’

From the driving seat, there's no way of knowing this vital piece of information. The secret is uncovered only by the two Aston Martin technicians, with their laptop and DB6 interface, who monitor the car's systems every time it has been run. Even my test drive is about to form another vital bit of R&D.

Everything is entirely normal in here. The finished version will have its rev-counter repurposed into a power and torque gauge, still with the authentic Smiths look, and other gauges may take on new functions - such as residual battery charge in the fuel gauge. There will also be a small screen 'discreetly' fitted somewhere in the cabin to show electrical data not covered elsewhere. And some gauges might do nothing at all, until reunited with the petrol engine that triggers their needles.

This normality extends to the clutch pedal and gearlever. You might ask why these are present, when all an electric car normally needs is a selector for forwards or backwards. 'We wanted to try the manual transmission to see if it's the right thing to do,' Paul says. 'Now we're leaning towards linking the motor directly to the differential.' Not the right thing to do, then.

Time to start her up. This involves turning the ignition key to its first position, waiting for the flashing of the (non-standard but period- looking) green warning light thus triggered to stop, then turning the key further briefly against its spring, as though activating the original starter, and giving the brake pedal a single prod.

The electric heart is now alive; this protocol has been designed to stop people simply switching on and perhaps pressing the accelerator inadvertently, causing the silent DB6 to rocket forth. Assuming it's not in neutral, of course.

'Put in in second or third gear, it doesn't really matter,' suggests Paul. 'But not fifth. The torque would probably tear the clutch apart.' I go for second, having instinctively floored the clutch first. Which isn't necessary, because the motor isn't running. It will run only when I press the accelerator.

When I do just that, the DB6 hums and whooshes gently forwards like... what? A retro- reinterpreted Tesla Roadster? An underground train? A petrol DB6, engine off, with handbrake released when pointing down a steep hill? Bits of all of those, actually. It's quite surreal.

Electric cars aren't silent. There are always those electric noises, quite engaging in themselves if not quite the enthusiastic blare of a well-tuned six-pot. Creating an artificial engine note is a possibility for customers who might want it, perhaps with a transponder in a tailpipe as already used by some production cars (diesels, generally, whose vocals need sexing-up). It could be switchable, with a stealth mode when required. 'I'd prefer stealth,' Paul contends, 'because it would be more authentic. It would be part of the electric experience.'

Anyway, this is an old Aston Martin, albeit a very fit one, so there's a danger that other noises, hitherto masked by the engine, might become annoyingly obvious. Buzzes, clonks, rattles, road roar from those balloon tyres... but they aren't annoying at all. 'We were worried about that,' Paul admits, 'but it's actually pretty good.'

The headlights are on, not very brightly, and the wipers are casually clearing the spray. These functions are presently still powered by the original 12V electrics, whose fading battery is not being replenished because that bit hasn't been engineered yet. Patience, please - the Heritage EV first ran only a week ago. And I am the first non-Aston person to drive it.

Also not engineered yet is a heater, so the seats are still damp and I am freezing. There was ice on the road earlier, and this is the first time the Heritage EV has run at an ambient temperature below the 5degC that's the intended minimum. It seems entirely happy, actually, unlike my fast-numbing toes. An electric heating element will take up station in place of a heater matrix in due course.

On the hill route, this DB6 handles like any other because the weight and its distribution are virtually as standard, as is the suspension. There's Aston-credible thrust between 40 and 60mph, beyond which we can't venture here, and below which the thrust fades, especially on a steep hill. That's a surprise, given how an electric motor is supposed to give maximum torque at its zero rpm 'stall speed', but the planned bigger motor and battery pack, their weight counteracted by the removal of the gearbox whose space the motor will partly occupy, should fix that.

So... can I change gear now, please? I can't - at least not without causing a big and damaging jerk. With the accelerator lifted and the clutch depressed, the motor stops. Gauging the right motor speed to achieve a smooth resumption of drive is almost impossible, and Paul sees no point in devising an automatic way of doing this now that the gearbox has proved unnecessary.

This, then, is a two-pedal DB6, the clutch as useless as a human appendix. Actually it's mostly one-pedal, because it has such strong regenerative braking that the footbrake is seldom needed. It doesn't yet activate the brake lights but it soon will, perhaps via a deceleration-g sensor. A hill-holder could be added, too; at the moment you can rock gently up and down a hill, with amazing precision, just by squeezing and releasing the accelerator.

The electric DB6 works well, and the next iteration - using this same car - will be even better. 'In the long term,' says Paul, 'we could see the cars being EVs on the public highway during the week and changed back to petrol for trackdays or racing at the weekend. We're future-proofing but keeping the cars' patina and protecting their value.

'Social pressures against old cars can't be underestimated, and you do get a feeling of wellbeing when you drive this one. It's the most amazing experience to drive it on the road, especially in a city. It's guilt-free and you can enjoy the ambience of the car more. When we drove it in Monaco, schoolchildren at bus stops were ooh-ing and aah-ing as we approached. And then they were amazed that it was completely quiet.'

You might not approve of the electric DB6. In an ideal petrolhead world, nor might I - but the reality is that enjoying classic cars in the zero-emissions zones that will proliferate in future will call for a solution just like this. It might be goodbye to the internal combustion engine, but not the rest of the car. 'If we don't do something,' Paul Spires points out, 'these cars will become museum pieces in ten or 15 years' time. I would hate our cars to become like Concorde. 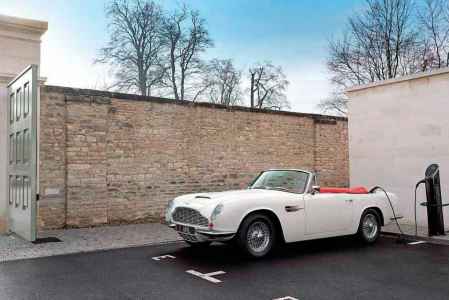 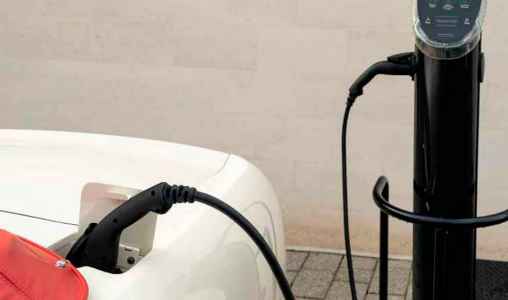 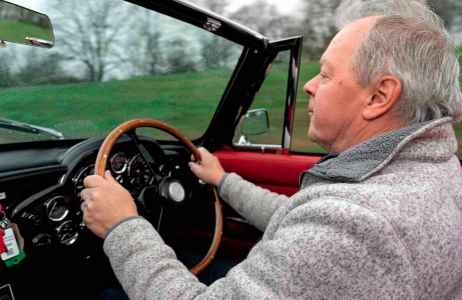 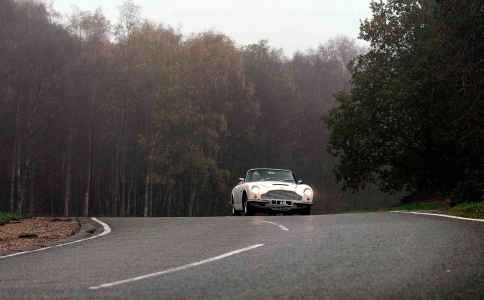 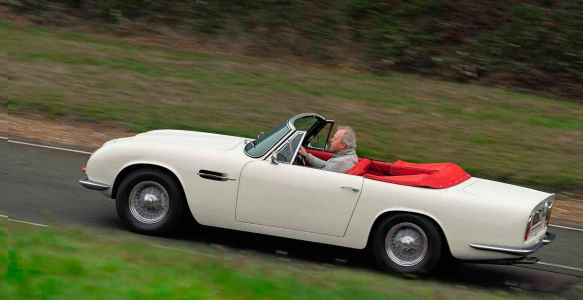 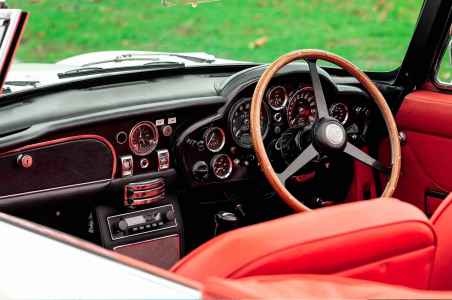 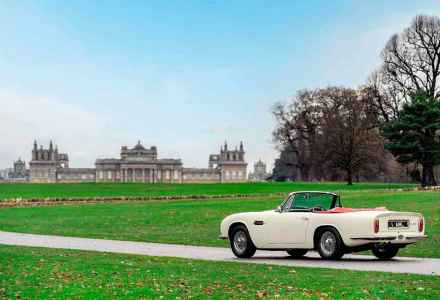 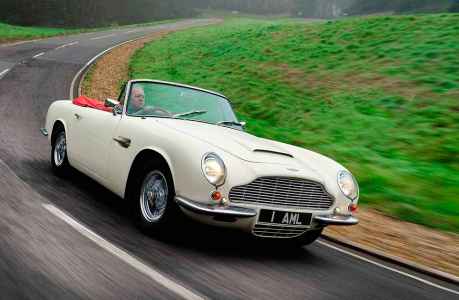 Above: The exhaust tailpipes are retained so as not to dilute the Aston’s visual appeal - and in case the owner wishes to reinstate the straight-six petrol engine; the process of replacing the engine is easily reversible and should take only a couple of days. Left: Few clues here that this is anything other than a standard DB6. Eventually the dials will be repurposed, the rev-counter becoming a power and torque gauge, but still with their original look. Left and below: Our man Simister tries the electric DB6 at Millbrook, the first person outside Aston to drive this early 'Heritage EV’ prototype. Target range is 200km (124 miles) with similar 0-60mph performance to a petrol-fuelled DB6.