Lancia 2000IE Berlina vs.Citroen DS23 IE Pallas and Triumph PI Mk2 2500 Giant Road Test 2017 Drive-my.com and Tony Baker
Rate this item
(1 Vote)
Tagged under
Read 1823 times Last modified on Thursday, 23 February 2017 11:03
Tweet
Each era of motoring has its key phrases: in the late 1970s, it was ‘turbocharged’ or ‘front air dam'; by the early 1980s it became ’trip computer’ or ‘drag coefficient’; and, from the late '60s to the early 1970s, it was ‘fuel injection'. A carburettor is limited to supplying the engine with only the amount of fuel/air mixture that it is capable of ingesting, whereas with injection each cylinder may be allotted an exact quantity of fuel.

By the mid-1960s, injection was already associated with exotic sporting machinery, but with this group we will see how it affected the prowess of three quite different interpretations of the well-appointed luxury saloon. 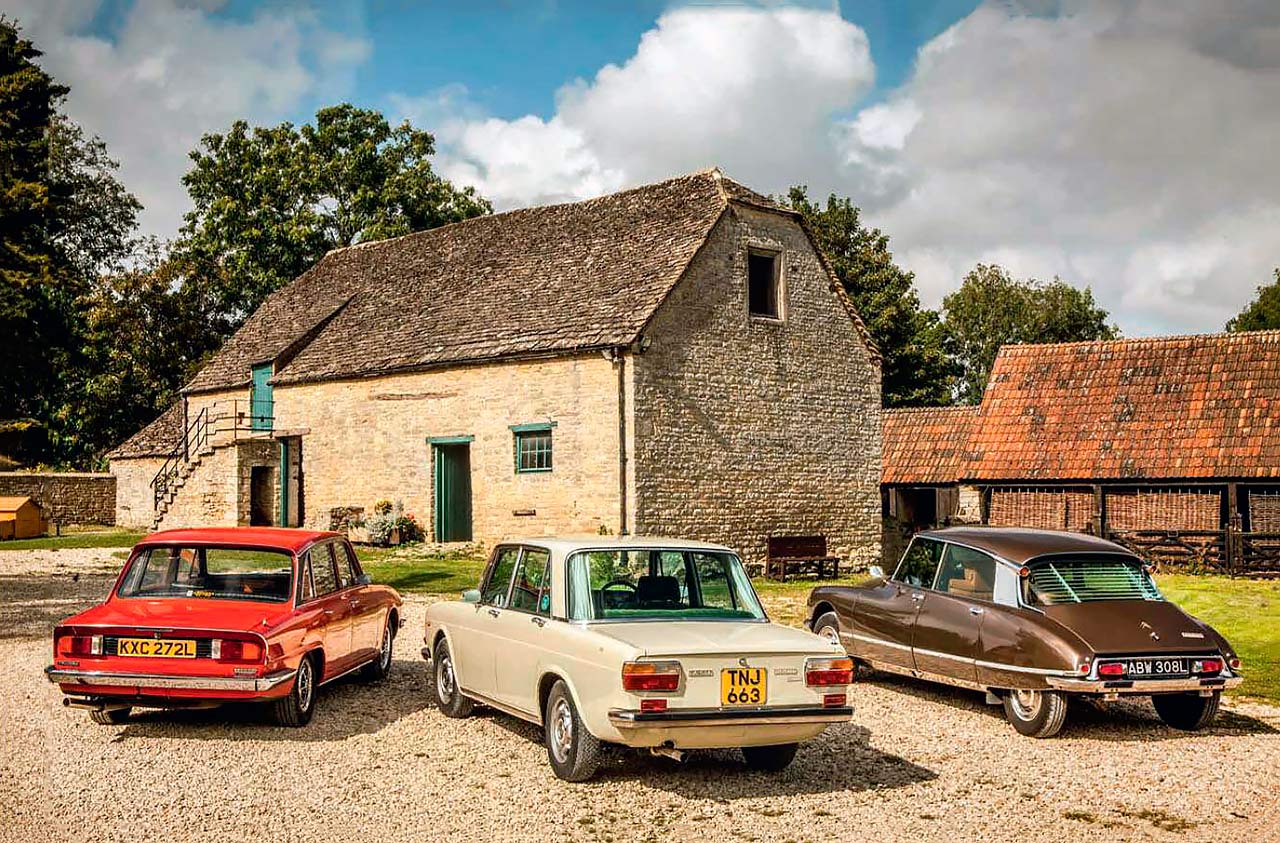 The Triumph would have been the most familiar member of our trio to a 1970s British business motorist. In its original MkI 2000 form, this was the car that, together with the Rover P6, had virtually created the junior executive market sector back in 1963. Triumph had been considering an increase in power since shortly after the launch, however, with deliberations stimulated by the 2000TC in 1966 and the knowledge that a 3.5-litre V8 P6 was due in ’1968. Plus, the TR4, with its aged four-pot, needed a performance boost At that time, the Stag’s V8 was at far too early a stage in its development to be used in the 2000's bay, but Canley’s engineers had already produced a version of the 2-litre straight-six equipped with the fuel-injection system that Lucas had been evolving since 1953.

It was decided that the TR and the 2000 would be offered with this updated unit, the TR5 making its debut first in 1967. The engine was stroked to 2498cc, to provide more torque at low speeds, plus, to compensate for the extra weight, the brake servo and transmission were uprated.

When the Triumph 2.5PI was launched in late ’1968, it was to considerable press interest because the Lucas system was associated with many Grand Prix victories in the 1965, ’1966 and ’1967 seasons. Matt-black trimmings and ‘sports wheels’ plus different dials denoted the only British injected saloon. Lucas rejected electronic control because its Mk2 mechanical set-up was intended to be easy to manufacture and simple to maintain.

THE 2.5PI IS SUCH AN AGREEABLE CAR: RAPID, REFINED AND HAVING GENUINE PRESENCE’

The entire 2000/2500 range was facelifted in late ’1969 into the longer-nosed Mk2, which made the PI appear, if anything, even more aggressive. Our Pimento red test car seems poised to storm die M1, an exotic tintop that would look down with mild disdain on carburetted P6s, Granadas and XJ6s in the directors’ car park. Indeed, the Triumph is such a handsome and dynamic vehicle that it is difficult to believe that only six years separates the debut of the Mk2 from the demise of the final Standard Vanguard.

Unfortunately, beneath that suave image lay some problems: too few garages understood how to fettle the injection and, even in the early ’70s, BL’s lack of quality control was becoming a joke.

There was also the issue of emissions controls — neither the PI nor the TR5 was ever officially marketed in the States — and that the 2.5 was devised on a limited budget. Just as those ‘sports wheels’ were, in fact, hubcaps, the Triumph's fuel pump was basically a modified wiper motor that often overheated. This caused the fuel to vaporise and would bring your executive express to a halt until the temperatures dropped.

In 1975, the 2500PI, as the car was then known, was finally replaced by a twin-carb model, a decision made in light of die 1973 Fuel Crisis and the poor reputation that the Lucas system had acquired. This was a shame because the 2.5PI was - and is - such an agreeable car: rapid, refined and having genuine presence. By the time this dashing Mk2 had left the factory, BL’s management had decided that the 2000/2500 would be the last large Triumph saloon. The lingering impression remains that, had the injected versions been better understood - and better built-this may not hare been the case. 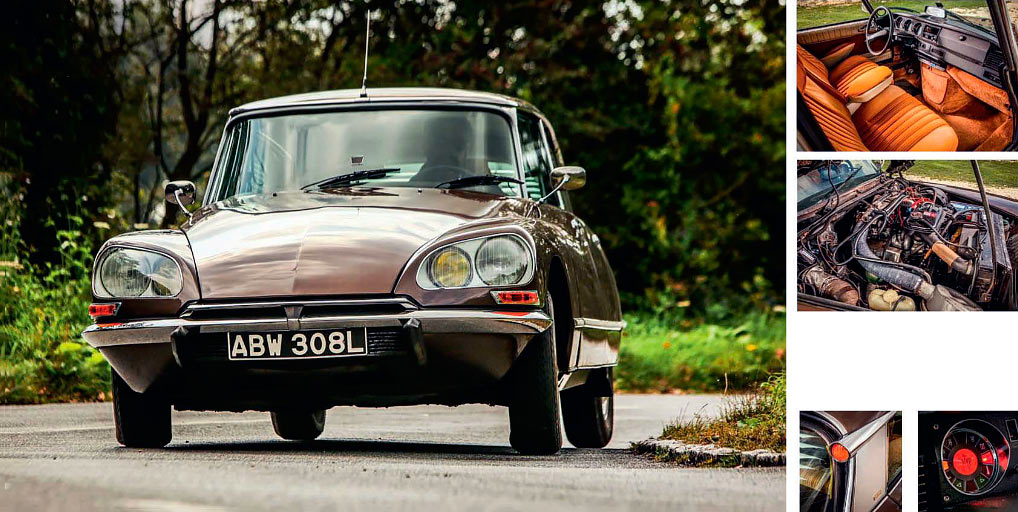 The second vehicle of the set, the Citroen DS23 IE Pallas, would invariably have appealed to a driver who saw the Triumph as ultra-conventional. Here was a car aimed at those types who watched BBC2: a front-drive saloon of unmistakable profile with a five-speed box and a 'computer controlled engine'. When the DS21 became the first French car to have injection-electronique as standard in the autumn of 1969, lots of column centimetres were written about the Bosch system’s sensors. They monitored coolant temperature, atmospheric pressure, engine speed and throttle opening. All of this information was conveyed to a transistorised controller - high technology indeed, 46 years ago, when you could still buy a new Morris Oxford.

In 1973, Citroen unveiled the 2347cc DS23, in carburettor and infected forms, with a choice of four-speed semi-automatic, three-speed auto or five-speed manual 'boxes- When yon consider that UK drivers of that time mainly associated the latter transmission with the Austin Maxi, this docs convey how radical a DS23 IE. Pallas would have appeared after 18 years of the Deesse. Our car is, like any “D”, both utterly familiar and truly enigmatic, for It is one of those rare daisies that transcends rime. Yet one detail - that was no doubt advanced when new - absolutely anchors it in a particular era. The late-model dashboard with its huge “STOP” warning lamp really does look as though it was hi jaded from Stingray.

If you were considering a change from an upmarket British car of the period, the DS23 may have appeared formidable, although after a few miles many drivers would not contemplate taking the wheel of anything else. The vast, single-spoked item needs only three turns from lock to lode when parking a substantial motor car and the steering-column gearlever - a slow, deliberate shift - is easily used to gain the best from the high ratios. Best of all, the seating is so comfortable that Citroen owners might be tempted to consider setting up home in their DS.

The four-cylinder powerplant may lack the purr of the Triumph ‘six’, but it allowed the big Citroen to be propelled at a steady 115mph in top along the A20 L'Ocitane autorute, sailing past Peugeot 504s and BMW 520s E12 with ineffable elan. The DS docs not boast especially startling acceleration, but it has the highest top speed of our group. Botch injection was a fairly costly option, upping the new price by 10%, but it really focuses performance. Car aptly described the model as offering ‘an unworldly sort of motoring‘ and, no matter how blase you may become about the ‘Goddess', a DS25 IE still induces a sense of awe as you experience what philosopher Roland Barthes called ‘the new Nautilus'. 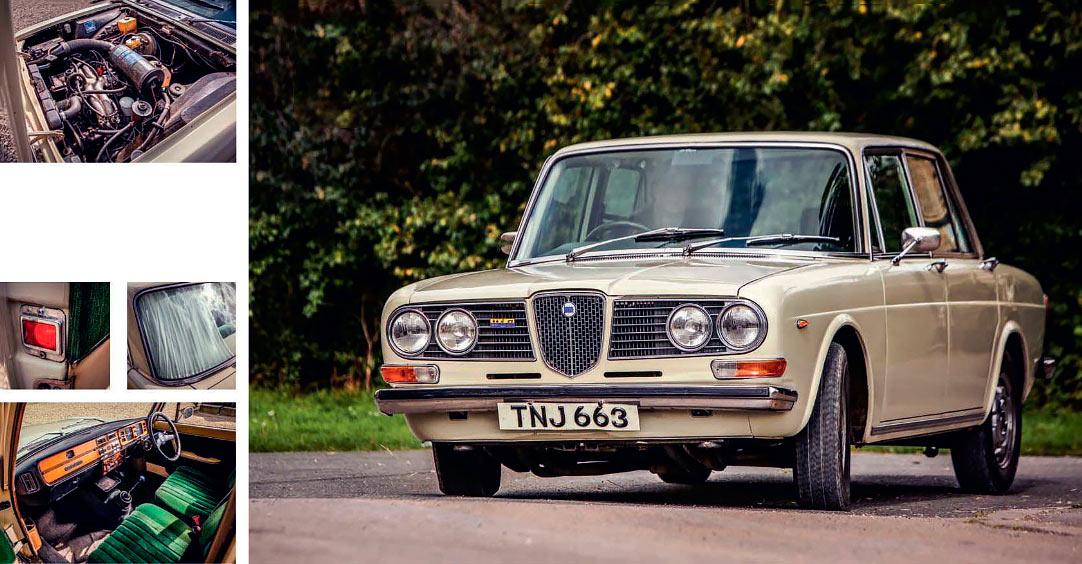 The last member of our trio is a car that would have been the least familiar to '70s UK motorists - the Lancia 2000IE. The initial impression is just how imposingly formal it looks compared to its British and French rivals. Middle-class German saloons of the 1950s, '60s and even '70s have a reputation for their severe styling, but large cars from Fiat, Alla Romeo and Lancia from the same era are often just as understated.

The coachwork of the 2000 dates bade to die original, slightly less bluff Flavia Berlina. Its high roofline is a reminder that at the time no self-respecting member of die Italian middle class would have been seen without the correct headgear. There is no place here for die Triumph's exuberant hubcaps because die Lancia status is denoted by discreet script. That said, the fascia — with its 'veneer’ fillets — is not exactly subtle.

The unveiling of the Flavia at the 1960 Turin Salon marked the launch of the first-ever front-drive Italian production model. If that were not innovation enough, the new Lancia was also the country first car «nth four disc brakes. Power came from an all-alloy, 1.5-litre flat-four and, two years later, the Flavia was offered with a 1.8-litre unit. Kugelfischer injection was an option from '1965, so that the Lancia would remain competitive against BMW‘s Neue Klasse, which later used die same system. Plus, a facelift in '1967 - known as the Milleotto -gave the Flavia saloon more formal but still handsome styling.

Alas, Lancia was in desperate financial straits by then - a situation not assisted by the cost of making the Flavia. Fiat took control of the firm in October ’1969 and one of its early decisions was to rationalise the range. The 1.5 and 1.8 were dropped by 1970 and only the recently launched 2-litre model was to remain in production. In 1971, even the Flavia badge was discarded - it was believed to have too many associations with unreliability - when the Lancia was relaunched as the 2000. The following year brought the IE, with easier-to-service Bosch electronics instead of the complex Kugelfischer mechanical set-up.

The shield-shaped grille on our Pistachio 2000 is a reminder of how Lancia management wanted to differentiate its flagship saloon from the Fiat-derived Beta. The Art Deco-style instruments were also not to be found in the likes of the 130 or 132, although the 2000 needs no mod cons to establish its tense of individuality. The sheer quality of the Lancia is conveyed not in the electric windows or the ZF power steering that were standard fittings on the IE. Even the rear screen curtains and deep green upholstery, wonderful though both are, they are not necessary to establish the 2000‘s place in the motoring world. 'Ibis is a member of the Flavia family and that is distinction enough, regardless of those deluded passers-by who enquire: “Is it a Lada?"

You sit upright at the wheel of the 2000, master or mistress of all you see, even if the dashboard looks as though it is made from Bakelite and the handbrake feels distressingly cosmetic. There is also a hand throttle (like a choke), an interesting device that you may not expect with fuel injection, and firing up elicits an engine note that is as simultaneously refined as it is musical.

The IE does not so much offer blistering acceleration - yet it’s joint quickest here - but all that is wondrous about the 2000 in enhanced form. It gave Home Counties motorists a moreish taste of La Dolce Vita. The Lancia handles superbly, too, while its eager boxer unit urges the driver ever onwards. If its appeal has to be summarised, it is as formal transport for five with the road manners of a Cooper ‘S'.

None of these saloons uses fuel injection as a gimmick, each deploying their respective system for sound engineering and marketing reasons. The 2.5 PI is yet another example of British Leyland’s propensity for ruining the prospects of its most promising models, a car that could have served as an opening act to a new generation of Triumphs had the parent company management understood quality control. The IE Pallas achieves die difficult - indeed near-impossible — task of enhancing the DS formula. And as for the IE Berlina, it is proof that automotive greatness is often low-key in form. The 2000 is idiosyncratic, uncompromising and charming — the last of the true Lancias.

Brakes discs all round with servo

Thanks to owner Robert Monnix

Thanks to owner Jamie Piggott

Thanks to owner Jim Berriman

DS best ever - but oldest car in group and a have little bit archaic design.