Aston Vanquish Astonishing Double-Top. Our Clever Money Car this month is the Aston Martin Vanquish, which not only looks amazing, but should whisk you to 200mph. Beautiful and capable of 200mph, we say the Aston Martin Vanquish will be a joy to own that's also going to look after you financially. Time to sell the family Silver and grab one! The 200mph Vanquish is the last in a great line of hand-built Aston Martins. And yet it's relatively great value – but for how much longer? Words Keith Adams. Photography Neil Fraser.

The Aston Martin Vanquish weaves its magic long before you find a great road to drive it on. As you twist the key and fire up its melodious V12, you'll already be completely under its spell. Chances are it'll have its hooks in you the first time you clap your eyes on it.

Which, in a way, is doing this car considerable disservice. If you're not completely au fait with Aston Martin history, the significance of the Vanquish might be lost on you. It was the final handbuilt series-production model to roll out of the company's Newport Pagnell works, and it rolled in the aluminium and composite VH architecture that underpinned the company's line-up post-DB9.

Of course, as a red-blooded petrolhead, you might not be thinking of the Vanquish's legacy the first time you open the floodgates on your favourite open road. But you should. These things matter in the long term – because it's good to know that while you enjoy your 460bhp on a regular basis, there's good reason for it to gain in value more than enough, hopefully, to cover its running costs.

Interior is tight, but it feels fantastic. Get the 6.0-litre V12 into the higher echelons of its rev range and you'll fall deeply in love.

Let's not get too far ahead, though, because it's worth understanding how much of a step-change the Vanquish was. Yes, under its shapely bonnet beats the heart of a 6.0-litre V12 – but that had been seen before in the DB7 Vantage. And yes, the styling was an evolution of the DB7/DB9 bloodline that makes it look so modern now, 15 years after it first appeared.

Gone was the clunky, heavy-duty six-speed manual from the DB7. In its place was a paddleshift automated manual controlled by an electro-hydraulic paddleshift gearchange. As you'll read later, that wasn't exactly trouble-free in service. Then there was the body engineering, which made the car it replaced look positively antediluvian. It combined a body tub made from extruded aluminium and carbonfibre with extensive composites throughout. Considering that Aston Martin was still hand-rolling its aluminium panels a mere decade before, this was quite a technological leap. Then there was the Vanquish's shapely body, which was formed from super formed aluminium panels. You get the idea – the company was clearly rolling up its sleeves for a fight with Ferrari.

And how. Except that in 2001, when the Vanquish hit the market, it was already in danger of being outgunned by the opposition. The more svelte Ferrari 550 Maranello, launched in 1996, boasted 479bhp, and that was bested by the 575M's 515bhp, mere weeks after the launch of the Vanquish. Given the British shire horse was also heavier, that wasn't ideal.

Still, as we sit behind the rather upright fat-rimmed steering wheel, and finger the gorgeous paddleshifters, the fact it was potentially underpowered compared with the Ferrari 575M is a very distant thought. No, it's the drama of the thing that captivates – and pulls you in further. This is post-2001 Cool Britannia. There's no wood, no shiny veneer, just acres of aluminium contrasting with cool grey leather. There are some 'bitsa' Ford items in the switchgear department, but truth be told, you need to go looking for them, as they're well disguised. And interestingly, it doesn't feel quite as bespoke as the DB9's interior, despite that car being lower priced when new (and lower value now).

Still, there's no time for that. We don't have much time with this car, and there's lots to learn. Insert the key, wait for the start-up lights to go out, foot-on-brake, select neutral, and hit the starter button. Not good for a newbie, that's for sure.

The V12 fires into life with the drama we come to expect with new-age Aston Martins – the starter whirrs with a high-pitched shriek, and the V12 fires with a brief electronically managed blip of the throttle before settling to a cultured idle. If your hairs aren't standing on end, they should be.

We've heard lots – good and bad – about the paddleshifting automated manual, so decide to take things nice and easy to get up to speed. Given how far they've come in the past 15 years, it's easy to be disappointed, but actually, pulling the right-hand paddle and trickling the throttle effects a smooth getaway. Changing up is just as smooth, if you remember to lift off the throttle when it's changing up, and remember that it's not as fast as a modern. Shifting down is nicer, as you get the accompanying blip that matches revs, ratio and road speed. Nice. As we build up speed, getting to know the Vanquish comes quickly. It feels fleet-footed at medium speed, and curiously heavy at the wheel. As confidence builds, we start to explore the throttle and, like the DB9, it starts to come to life quickly. In second, and exiting a village, flooring the throttle has the tacho arc past 4000rpm beautifully and into a very special zone, where the V12 howls its haunting, melodic wail. Oh, yes, this, is where the Vanquish comes to life.

It's a brief joy, tempered by UK speed limits and the need to back off the throttle to get into third cleanly. With familiarity, speed comes to the gearchanges, but it's not a foolproof experience, as it is in a modern. We'd take that as a positive – we hear too often that paddle shifters take the subtlety out of driving. They don't here.

Even confined to the UK's GATSO-infested, speed restricted, 43mph Corsa-congested roads, you're never too far from feeling and enjoying this car's supremely long legs, even if you can't fully appreciate them. Overtaking is a delightful trip in third gear, where many opportunities present themselves. Performance figures tell some – but not all – of the story. Acceleration from 0-60mph in 4.4 seconds is not far off being matched by a new Civic Type-R, but the Vanquish's maximum speed of 190mph is on another, altogether higher plane. And that's how it should be.

Truth be told, most of the time on British B-roads, you can leave the Vanquish in third and destroy pretty much anything you want, such is the length of this car's legs. But it's also testament to the car's dynamics, which bestow the car with an agility that belies its 1850kg kerb weight.

As we know, our back roads are a stern test for any car, but this stiffly sprung heavyweight fares extremely well. Clearly, much work had been put into its damping, which rounds off the edges on all but the worst of surface perfections beautifully, while keeping the body movement in check. You never escape this car's weight, though – and the early impression that it's governed by heft never really goes away. But as we push on, the meaty steering partners this car wonderfully. It's accurate and nicely geared – just how you want it for a car that's considered a grand tourer, but which can also ace back roads. But only wide and well sighted back roads. This is a low car, with a long bonnet, low driving position and average visibility at best.

It means you're never going to be as comfortable whizzing rounds the hedgelined lanes of Cumbria as you would on the epic Route Napoléon in the South of France. Again, that's just as it should be. Not that there's that much room to lounge if you did decide to head for the Côte d'Azur via the Alpes-Maritimes. Head and legroom are pretty tight, and there aren't many places to stow your iPod, mobile phone and all those other items of paraphernalia you need to take on a long journey. Is it a consideration, really? Could be if you want to live the Vanquish dream.

We don't come close to exploring the dynamic limits of the Vanquish on this all-too brief reacquaintance session. This is not why we're here. But former experiences come flashing back all too intensely: the feeling of understeer in tighter bends when cracking on, which can be tamed by sensitive steering inputs and playful and committed use of the throttle (which were eradicated in the Vanquish S); and the oversteer that follows as a consequence. But it's far from a dynamic flaw.

Compared with a Ferrari 550, there's a palpable lack of finesse and subtlety in its response, but throw it against the hammer-like Lamborghinis available at similar money new and it feels very planted. But we're nitpicking, and choosing a car as your long-term life partner – as indeed it's going to be at this price, unless you're supremely wealthy – is more about emotion.

This is where the Vanquish really does play a blinder because it seems like every aspect of its creation and execution has been about making you, the driver, feel very special indeed. Come back to the knowledge that this car lived at the top of the Aston Martin tree when new, can top 190mph and it's pretty damned amazing now – and you will forgive it for most things.

'You can leave the Vanquish in third, and destroy pretty much anything you want on B-roads, such is the length of this car's legs' 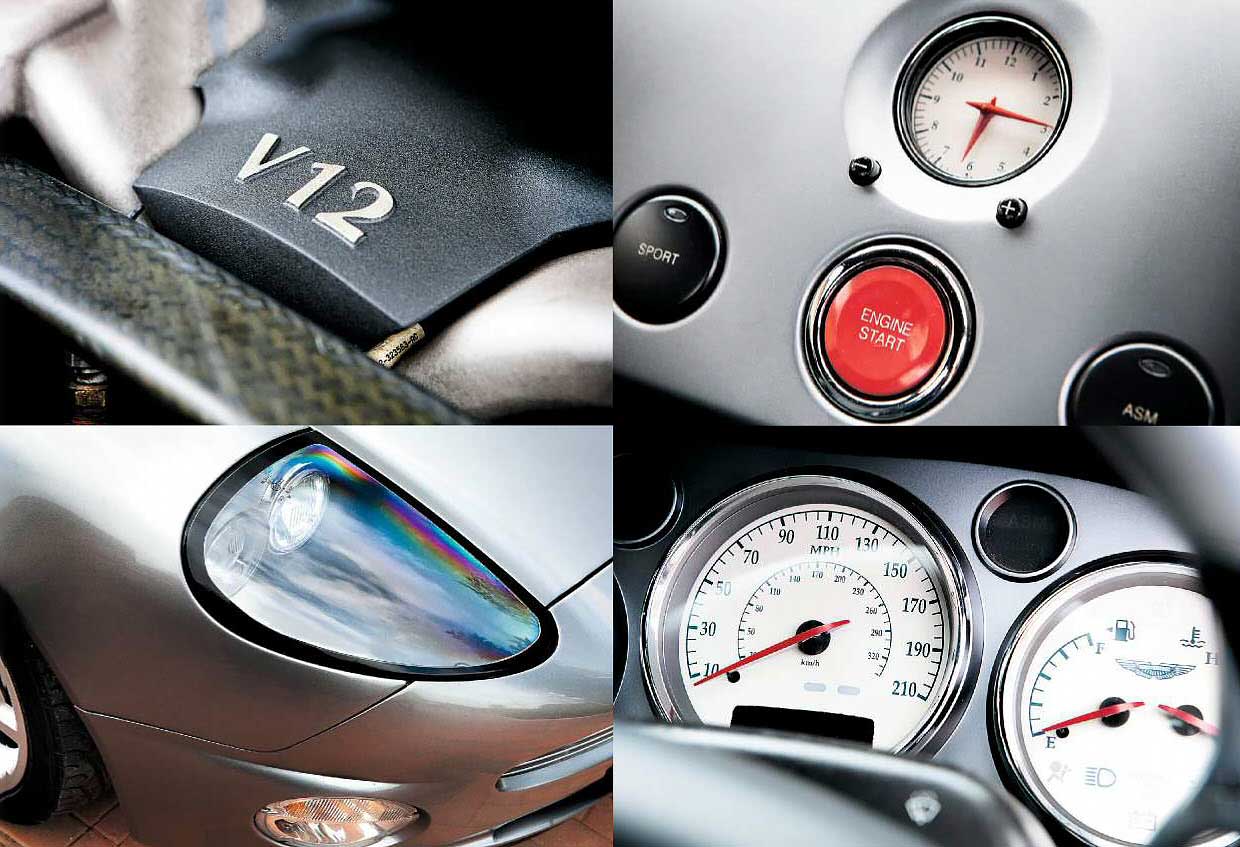 More than just the start button - it's a porthole to driving excellence. Hand-built body still looks fresh all these years later.

'Floor the throttle, see the tacho arc past 4000rpm and you're into a very special zone, where the V12 howls its haunting, melodic wail'

Turn the page to find out how to buy a peach of an Aston Martin Vanquish.

HOW MANY LEFT 1052 (Vanquish and Vanquish S)