When Fiat recently announced their new 2016 124 Spider they signalled a return to their sporting heritage. The traditional laurel wreath symbol of victory has always been associated with motorsport and the laurel-encircled Fiat badge has long been used by Fiat to denote their sporting models. This time the underlying platform may be shared with Mazda but prior to the huge cost escalation of platform development driven by modern electronic systems, safety and regulatory requirements, Fiat were pioneers in the art of platform sharing. 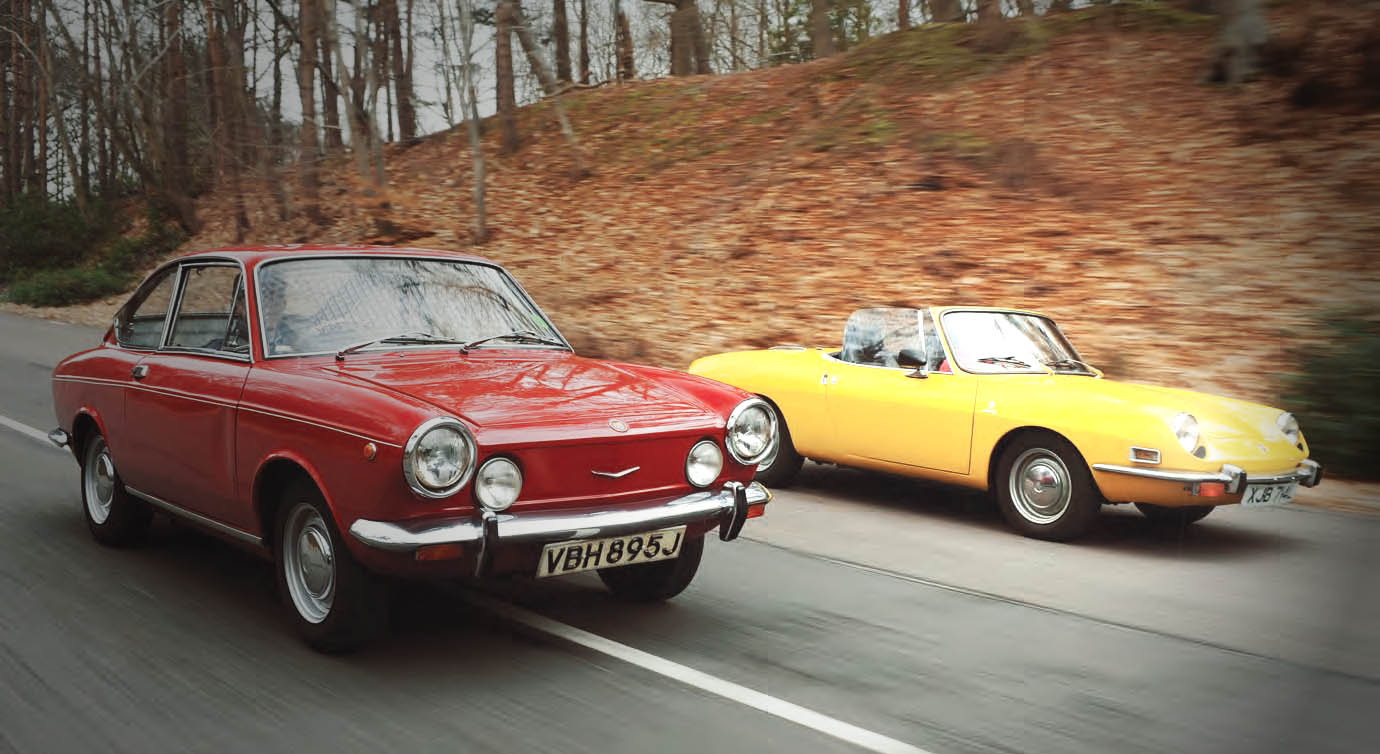 We hear a lot about the German manufacturers and their alphabet soup of vehicle platforms with derivatives to fill every niche, imaginary or real. But back in ’60s Fiat were a leader in platform sharing and covered multiple needs with varied body styles built on a single floor pan. In the days before platform sharing between motor manufacturers became a necessity because of the enormous cost of developing a new chassis, Fiat created multiple and extended lines of saloons, MPVs, coupes and convertibles each built on a shared chassis with common engines and drive trains.

For the 850, alongside the saloon, Fiat also produced a sleek Spider, sporty Coupe and a range of utility vehicles which included van, pick-up and camper versions. An amazing 2,203,380 Fiat 850 saloons rolled out of Turin accompanied by around half a million Coupe and Spider sports models.

Fiat first passed the million vehicles per year production milestone in 1965 when 134,500 employees dedicated to ‘the development of motoring, at all levels, for all transportation requirements’. At that time Fiat’s passenger car range was based on a mostly engine size designated ladder of front and smaller rearengine models; 500, 600, 850, 1100, 124, 1500, 1800, 2300 and Dino. At key points in the range Fiat offered coupe and convertible versions in small (850), medium (124) and large (Dino). The Italians were able to draw on the long heritage of domestic ‘carrozzerias’ who could be afforded design freedoms beyond those possible today. The addition of the 850 Coupe and convertible meant that the privileges of sports and open air motoring, previously reserved for the financially welloff, were now available to a younger set of customers with a clear line of aspirational models up to the expensive Dinos. 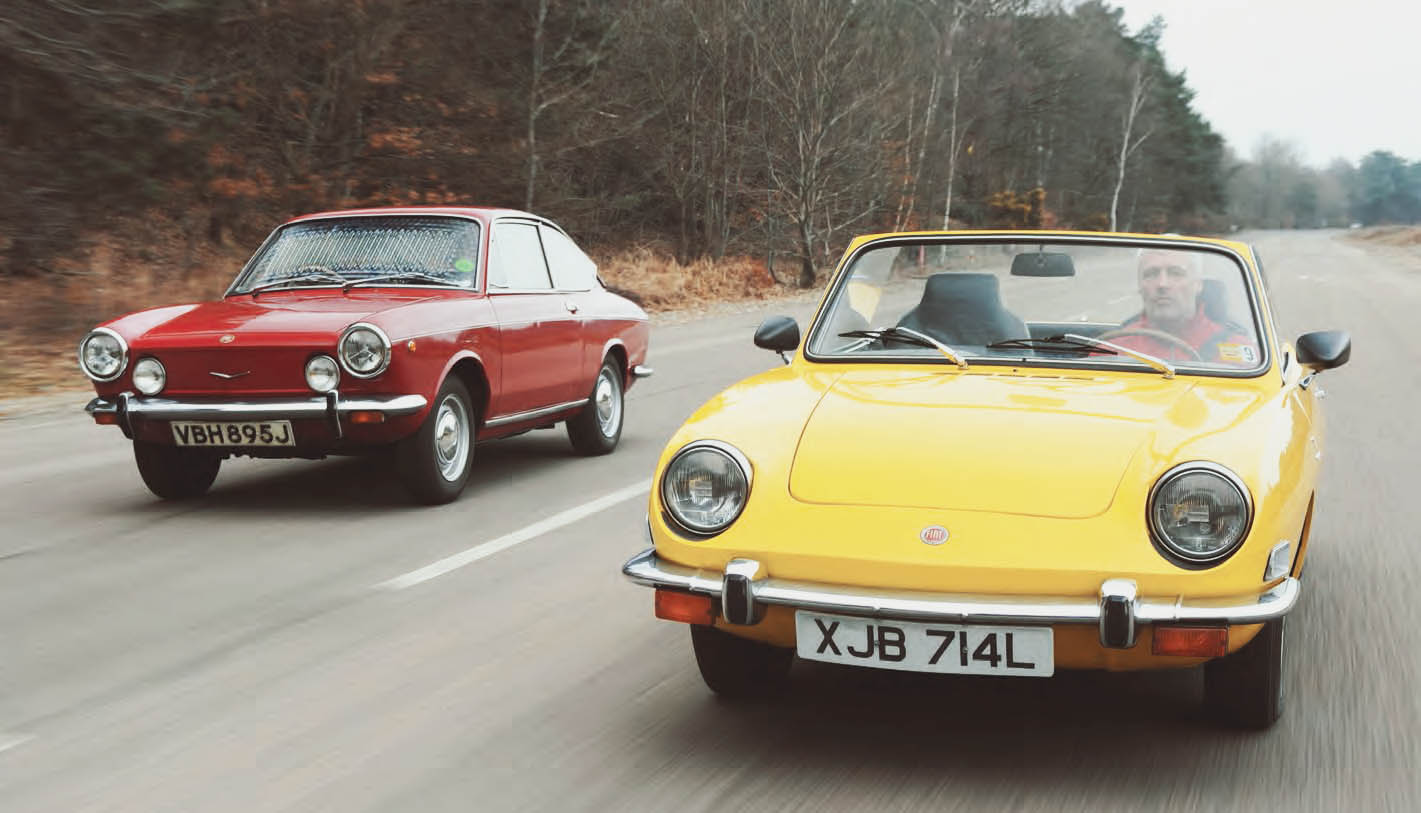 Although the chassis chosen for the 850 is essentially derived from the stock Fiat 600, the squared off rear body treatment that became fashionable on the 850, and Fiat’s other saloon and coupe designs of that period, was adopted when it was discovered that the additional horizontal surface under the rear window of the prototype’s body delivered a further 6mph of top speed. This conveniently allowed even more design freedom for the placement of the engine and transaxle’s rear-wheel drive configuration.

The Coupe was designed in-house at Centro Stile by father and son team, Felice and Gian Boano. It followed design cues from its big brother, the 124 Coupe, also styled by the Boanos. There were to be two developments of the Coupe and eventually a total of 380,000 were constructed in Italy.

Following their long held traditional approach for open-top cars, Fiat decided to outsource the design and build of the 850 Spider. Styling is attributed to Marcello Gandini (of Lamborghini Miura fame) at Bertone, though some claim that it takes cues from Giugiaro’s never-adopted Chevrolet Corvair Testudo (turtle) design study. Design and manufacture of the 850 Spider was a great success for Bertone with over 140,000 built, mainly for the US market where it was very good value, even though it was initially impeded with an 817cc engine to shimmy under the anti-smog regulations. At the time of selecting a sub-contractor for the 850 Spider the obvious candidates would have been Pininfarina and Bertone. Pininfarina were already busy building 1200/1500s for Fiat and likely already lined up for the upcoming 124 Spider. This was to be Bertone’s first major engagement with Fiat and subsequent contemporary photographs in Graham Robson’s 1984 Fiat Sports Cars show Spiders being assembled alongside Dino Coupes at the Grugliasco plant. 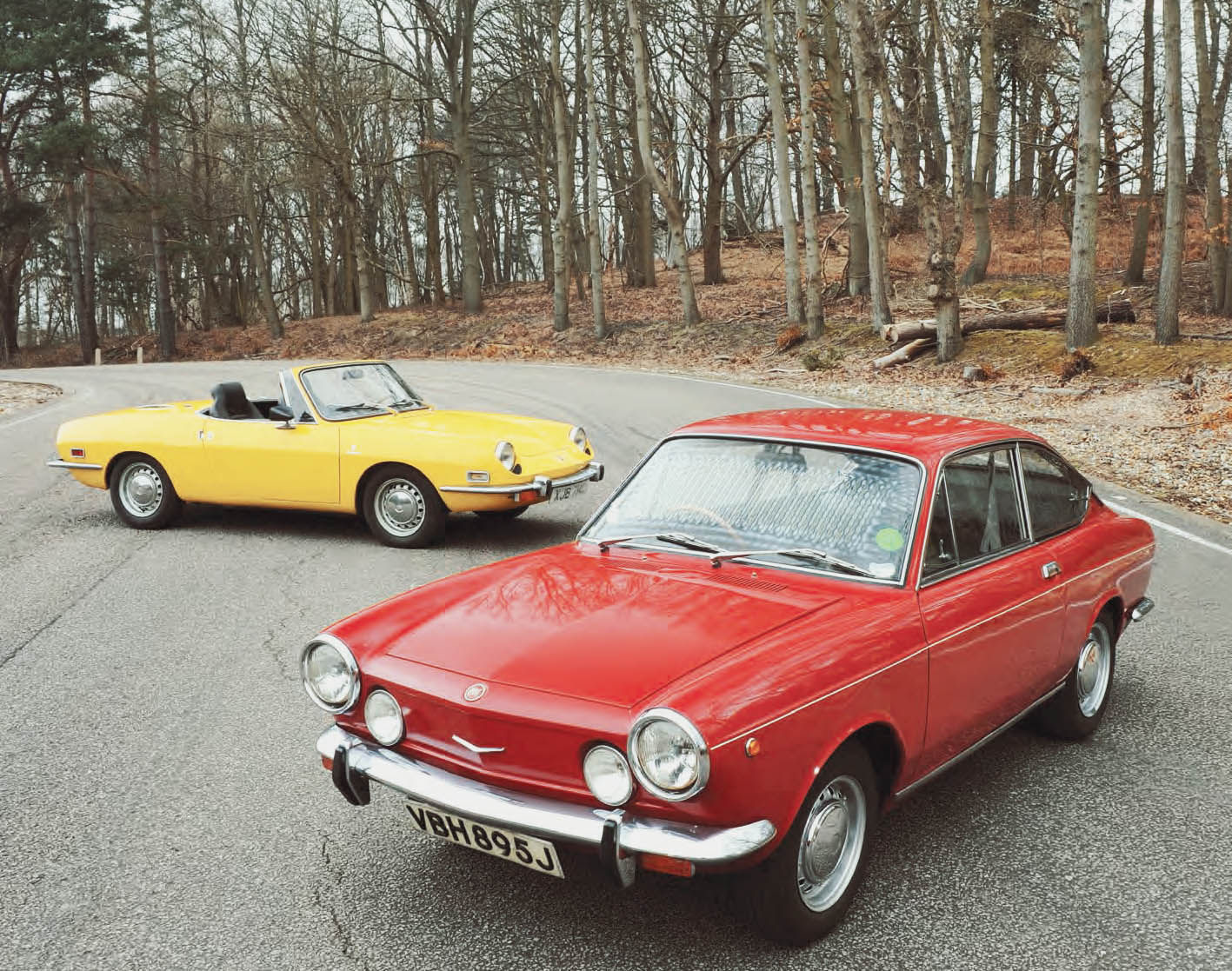 The Spider and Coupe were introduced simultaneously at the 1965 Geneva Show. It was here that, for the first time since the 1920s, the previously mentioned circular Sport badge with bronze laurel leaves was reintroduced. The Coupe weighed in lightly at 720kg while the Spider, despite its svelte lines is over 17cm longer and its ‘barchetta’ like nose results in a smaller luggage capacity. Seemingly not averse to resizing and repurposing their best work, Bertone presented a larger rendition of the 850 Spider’s lines a year later as a Porsche 911 Roadster design proposal. It was rejected by Porsche, apparently too Italianate and too big a leap for those preferring their evolutionary journey to take smaller steps. A curiosity of the 843cc engine was its counterconventional rotation to improve the cooling system.

With the pinion gear and input shaft located on the left, to allow for a wider radiator the car was otherwise in danger of having one forward and four reverse gears. Engine rotation was changed to suit and also tilted 5° to the left to enable ease of access to the number four spark plug.

Just like the bigger 124 Coupe and Spider, ‘Sport’ was added to the title for the bigger, more powerful, 903cc engined Series 2 revision in March 1968. Auto Italia Editor Phil Ward describes in his 2007 guide, Great Small Fiats: ‘Main changes for the Coupe were a higher tail, a four headlamp front end, revised tail lamps, bumper overriders, an alternator to replace the old dynamo, and radial tyres. Weight was now up to 745kg.

The Spider also received new lighting in the form of headlamps that stood vertically and overriders. A Mk3 Coupe appeared in 1971 at the Geneva Show featuring new front lighting which was raised to comply with export regulations. This had the effect of increasing the front overhang slightly. The version was short-lived as it was replaced by the FWD 128 Coupe announced at the Turin Show during the same year.’

Though UK buyers were denied the opportunity to purchase RHD 850 Spiders, during the life of these small Fiat sportscars there were plenty of competitors from the thriving British motor industry with the Sprite, Midget, Spitfire and Elan being obvious alternatives for the convertible. It is harder to pin down direct competitors for the Coupe but a Classic Cars magazine of 1991 pitched our featured 850 Coupe against the Sunbeam Stiletto, NSU TT, BMW 700 and Saab 96. Certainly, residents of mainland Europe and more adventurous British buyers had plenty of choice for their sporting aspirations during the ’60s.

First impressions of both of our example vehicles are of remarkably light and spacious cars. The Coupe’s styling is perfectly resolved with a delicately pillared glasshouse strongly reminiscent of its larger 124 Coupe relative. So satisfyingly proportioned, it is not immediately obvious that this is a rear engined car.

That lightness is carried through to the driving experience where the very gentlest of touch is required for the smooth operation of the primary controls. Both cars have tiny, almost feminine, pedal configurations which encourages a similar delicacy of touch for the foot operated controls. The position of the driver relative to the front wheel wells contributes to this confined foot space. 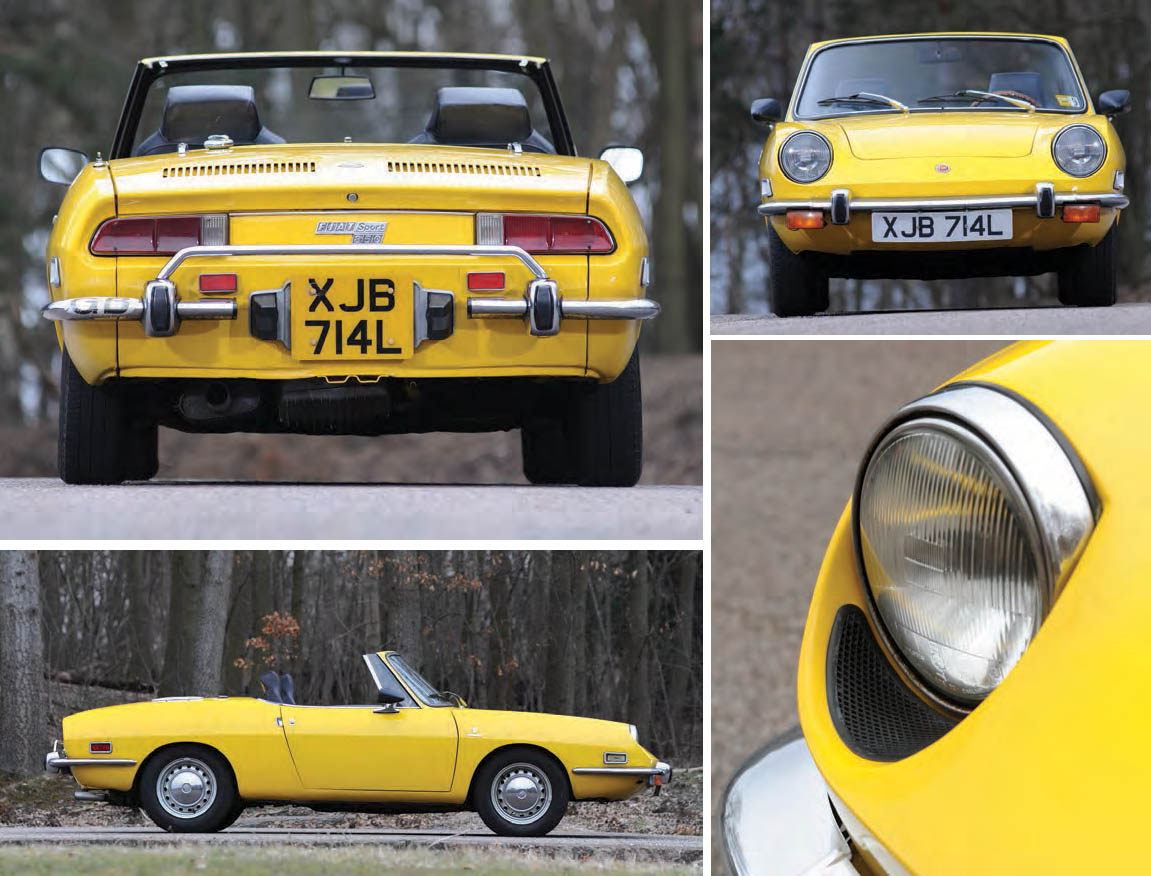 Visibility from within the Coupe is unimpeded by heavy structural pillars which make for an exceptionally airy feeling cabin defying its compact dimensions. A common characteristic of both derivatives occurs at about 50mph where the sound from the rear mounted four-cylinder engine fades to a satisfying tone as you drive away from your own combustion. Of course, in the convertible the sensation of speed is enhanced when the wind noise from its open top eventually overpowers and replaces the engine’s percussion and throaty exhaust note.

Notably, neither car showed any of the dreaded liftoff oversteer which defines some other more badly behaved rear-engined sportscars. On the Auto Italia test track with its variety of medium and fast, flat and banked curves both cars felt exceedingly stable, the Spider in particular being remarkably and reassuringly ‘bolted-down’ at speed through the corners. I attribute this fine balance to the independent suspension geometry which keeps any tail-happiness well in check.

It’s as though the lightness experienced at all touch points is extended to the point where the tyres meet the road. This is a chassis well worthy of the extra power that Abarth forced through the rear wheels of its hotter Coupe derivatives, despite a 62 per cent rear weight bias.

The owners of our featured cars both exude the passion of many Italian car owners and were connected by their love for small Fiat sportscars long before they met face to face. Chris Lake’s 1970 Monza red 850 Sport Series II Coupe has been in his ownership for more than 30 years. Coming from a then long time Fiatowning family, Chris bought his car when he was a student in 1985 for £300, and was his daily driver for three years. He had never seen one on the road before and was initially attracted by the purity of the design but hardened his resolve to own once he had experienced the way that it drove. He describes the car as “simple and different, providing all the qualities and sensations of a bona fide Italian sportscar, while still being modestly priced and relatively cheap to run”.

Chris maintains that aesthetically it is a design that “cannot be improved upon, and one of those rare occasions when a car manufacturer is at the top of its game and got everything right”. Retained beyond its initial role as economical and fun student transport, over the years he has built up an extensive stock of new and second-hand spares, though few of these have actually been used.

When Chris was a member of the Fiat Motor Club GB (and for a while its 850 registrar), his car was featured in Classic Car magazine alongside a saloon and a Spider and seen by featured Spider owner Tim Milnes who was immediately attracted by the styling of the 850 sports models. Well known in the classic Fiat community, Tim is a hands-on owner of multiple 850s who performs all of his own maintenance work. It showed when his car was pressed on track, feeling thoroughly sorted and reassuringly stable as speeds increased. Tim’s 1973 Spider is an imported South Carolina car, last used there in 1989, which passed through DTR European Sports Cars in 1991 on its way to being restored and cherished in Tim’s care. It’s very much part of his family and took Tim and his wife round Ireland in 1996 on their honeymoon, a post-wedding reception bottle of champagne wedged tightly, if warmly, between the back of the driver’s seat and the rear luggage shelf.

It’s unusual to find an owner who has only ever had just one Fiat 850 in his lifetime and with both cars so deeply embedded in their respective family histories it would be difficult to imagine anyone else getting their hands on either of these examples of Fiat at its sporting finest.

BELOW: This 1970 Series II 850 Coupe has been cherished by its current owner for over 30 years. 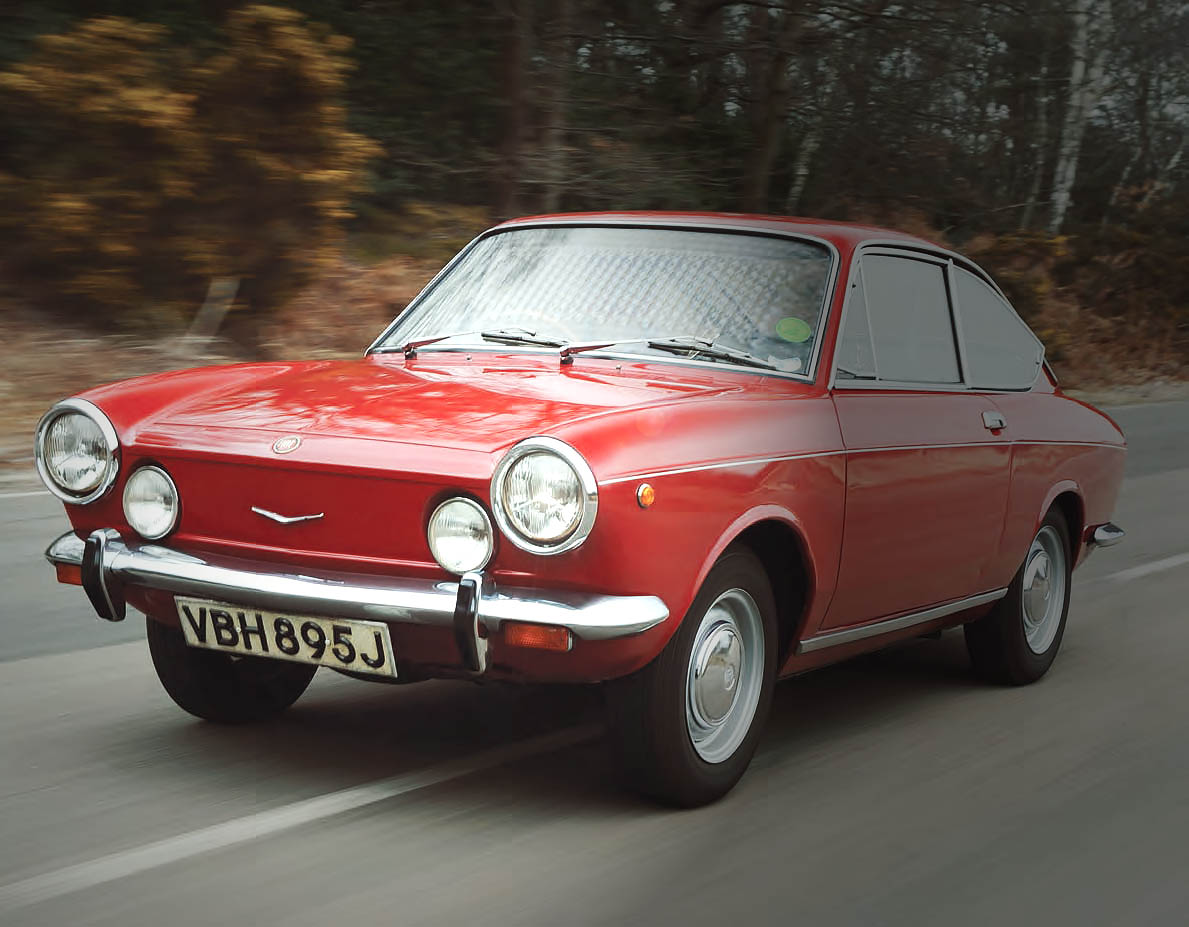