The List Car. Telford has a passion for Porsche but had never driven a ‘proper’ aircooled. Porsche 911. How does a day spent driving an early 2.0S measure up to his lifelong dream? 1968 Porsche 911S SWB 6000rpm on this coast road is simply addictive. ‘Everything about it is addictive’ Carl Telford is a dedicated Porsche fan but has never actually driven what he calls a ‘real 911’. Will a day behind the wheel of an early short-wheelbase 911S satisfy this air-cooled purist? Words Sam Dawson. Photography Neil Fraser.

I get the impression that today is one of many Porsche-themed days Carl Telford has enjoyed over the years. He has arrived early on this foggy morning to browse Paragon Porsche’s wares ahead of fulfilling a long-held ambition.

‘I’ve never driven a proper air-cooled 911 – a major omission for anyone who loves Porsche, I know. My wife’s birthday present to me this year was a factory tour at Stuttgart and the cars I found most fascinating at the Porsche museum were the 901 prototypes and the early 911s with the houndstooth seat trim. They seemed to me to have been created right on the cusp of the modern era when the wood-and-leather approach ended and motor sport began to direct the way in which cars were designed. It’s also the point where Porsche as we know it today emerged.’

Then one of Paragon’s drivers pulls up in front of the showroom’s glass frontage in a dazzling 1965 Porsche 911 2.0 SWB fresh from a wash and polish. This is as pure as 911s get – a short-wheelbase car with none of the aerodynamic extensions that sullied later examples and four Weber carburettors feeding the earliest displacement of Porsche’s flat-six engine. As far as Porsche aficionados are concerned, this is Genesis.

Lifting off the throttle mid-corner elicits a palpable weight-shift that telegraphs exactly where the car’s limits are.

Paragon’s Jamie Lipman gives Carl a brief lesson in the 911’s rear-engined, short-wheelbase driving dynamics – get as much of your braking out of the way in a straight line before diving into a corner and only accelerate once the line out of it is clear – and then we head off in the direction of the Sussex Heritage Coast roads. Carl takes to the 911 with ease almost immediately. ‘It’s such a tractable engine,’ he says. ‘I like the way it encourages you to explore its limits without being too intimidating – it’s just as happy to potter along as it is to bounce off the redline, if you’re in to that sort of thing. There’s much more torque than I was expecting and I especially like fourth gear; I can cruise in it at 40mph, but when I put my foot down, hear that wonderful wail and feel the tail hunker down, it just takes off! 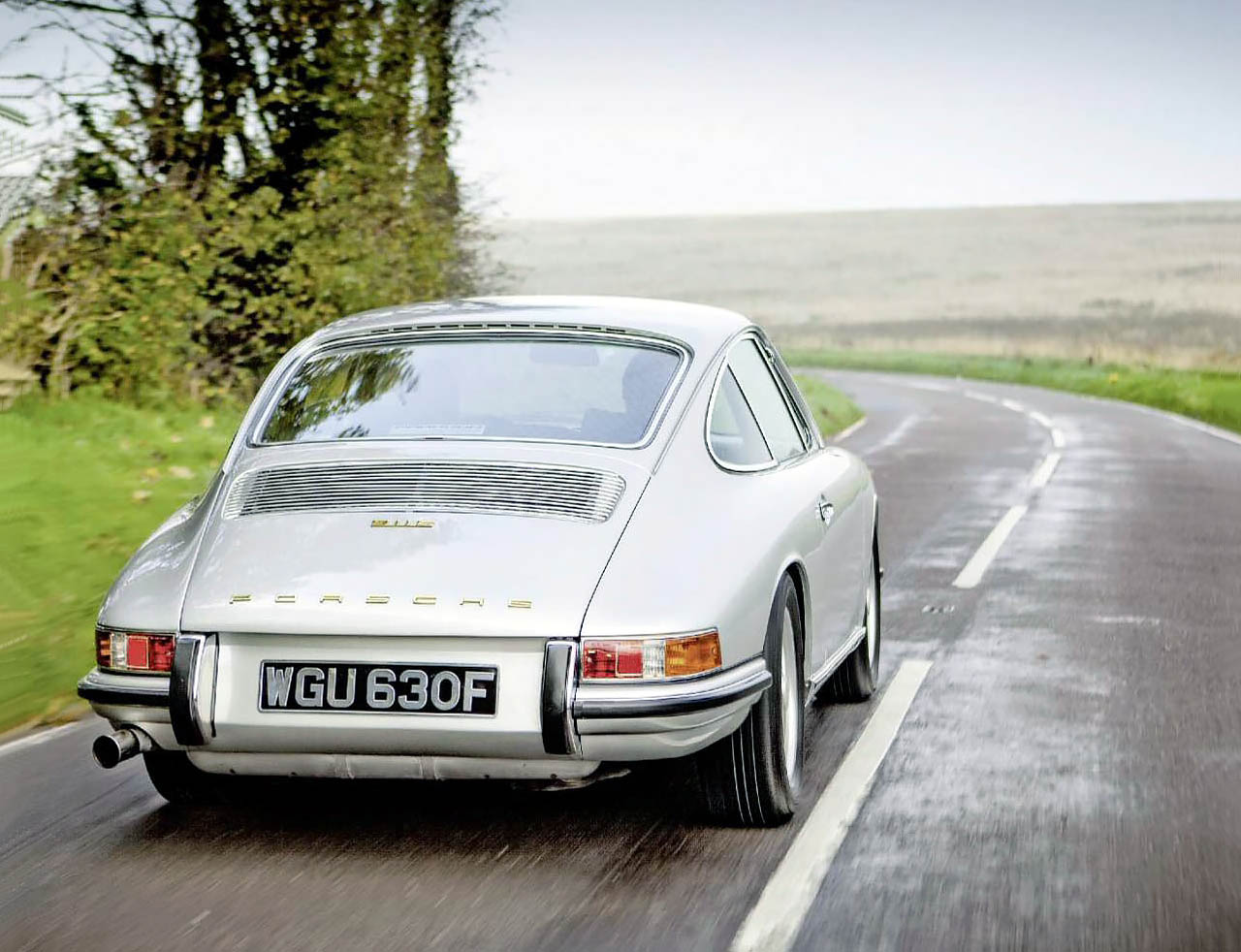 2.0-litre engine’s torque surprised Carl – ‘I especially like the way you can be cruising in fourth gear, put your foot down and it just takes off’

‘The gearchange takes some getting used to, though. Overall it’s a very easy car to drive but I reckon it would take me a couple of months of constant use before I could use the gearbox properly; its dogleg layout and recalcitrant action mean it’s the only aspect of the car that’s not completely slick and smooth. ‘That said, there’s so much torque that I don’t need to use it as much as I thought I would anyway, and the pedals are ideally positioned for heel-and-toe gearchanges.’

Gaining in confidence, Carl puts Jamie’s earlier physics lesson into action as the roads get more challenging, sweeping in and out of the mainland in parallel with the outline of the chalk cliffs to our right.

‘You don’t need to do much for it to really go,’ he says as the 911 hurtles out of another near-hairpin with the slightest prod of the throttle. ‘The only 911 I’ve driven before now was a new Targa, not a proper air-cooled 911. This one is much, much nicer. The feedback, the tactility, the noise – it’s all been lost in the new car. 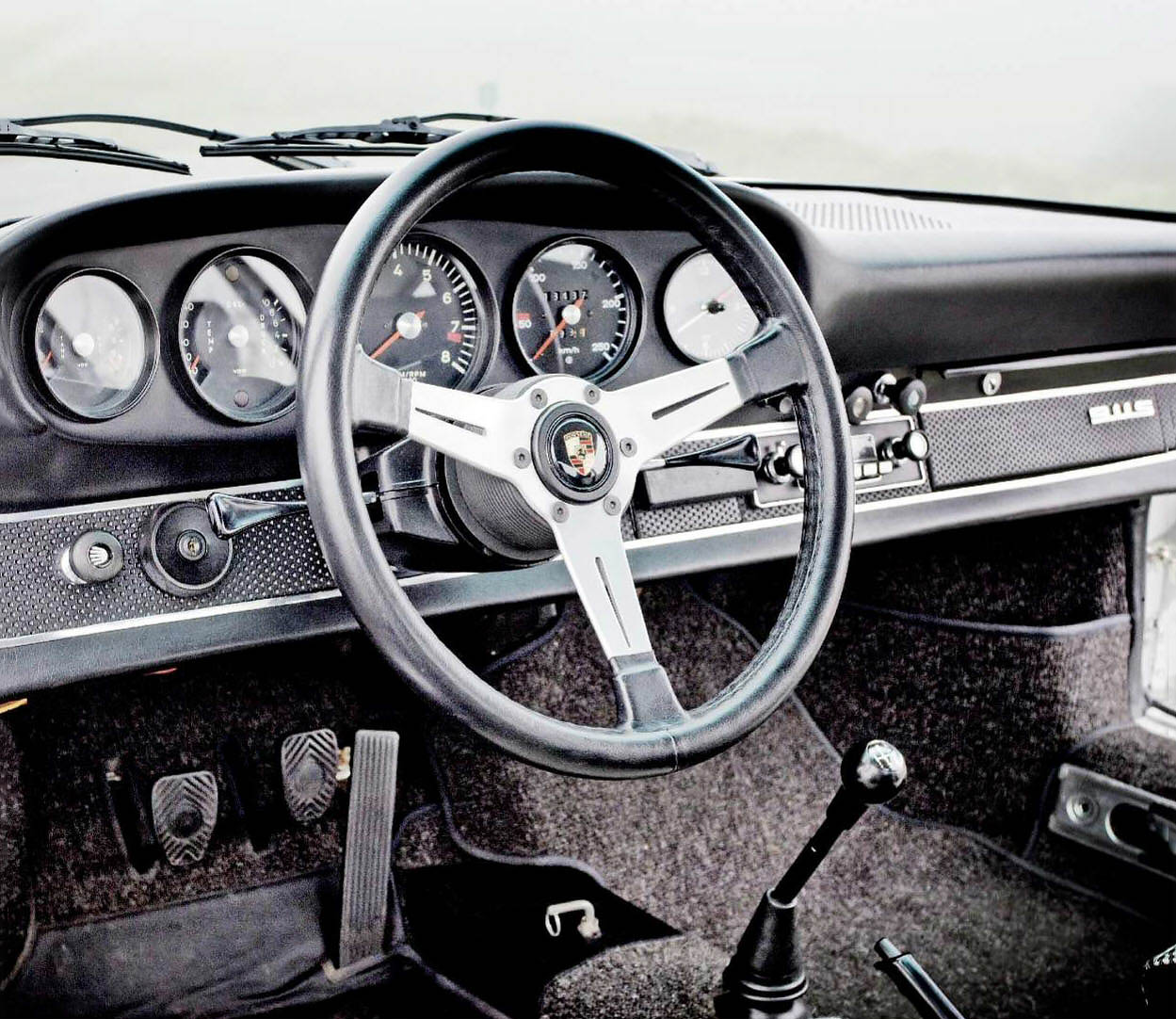 But this? Put it this way – I’m slowing down a bit too much before the corners just so I can put my foot down harder on the way out. ‘I can really feel the weight transfer when I lift off slightly mid-corner. I know I’ve got to be careful, but it’s good to know where the car’s limits are. Also, the steering feel – I don’t want to use the old go-kart cliché, but I really can feel every bump in the road.’

We pull over and I take the wheel. The first strong impression comes almost immediately through the steering wheel. Even pulling off sub-10mph parking manoeuvres in a bumpy, gravelly layby, the car reminds me of its intent, barging the wheel from side to side as it skirts potholes in a way that more comfort-orientated cars would smother with power-assistance or deliberately engineered vagueness.

The engine revs more smoothly than the sound it makes would suggest. There’s a harsh, loose, uncoordinated chatter, but press the right-hand pedal and its smooth, high-revving power delivery reminds me that it’s still a flat six-cylinder engine – with all the natural balance that brings – regardless of its throbbing air-cooled cacophany. There’s a smooth chromatic whizz as soon as I hit the throttle, followed by a racetrack gargle of accumulating violence from 3000rpm. The rear seems to squat at the same rate at which the accelerator is squeezed, so the more you accelerate, the more it grips. Idiosyncratic though the 911 might seem – especially when approaching tight bends – no other layout can do this. The harder I push it, the more it tries to help.

There’s no avoiding that gearchange, though; it’s not helped by the strange floor-hinged clutch pedal that pinches your ankle every time you go for it, and while first and reverse gears are easy to find, the fore-aft planes of second-third and fourth-fifth are so close together that they’re easily misslotted. The torque Carl has been eulogising about helps to overcome it, but the shift quality is not ideal. 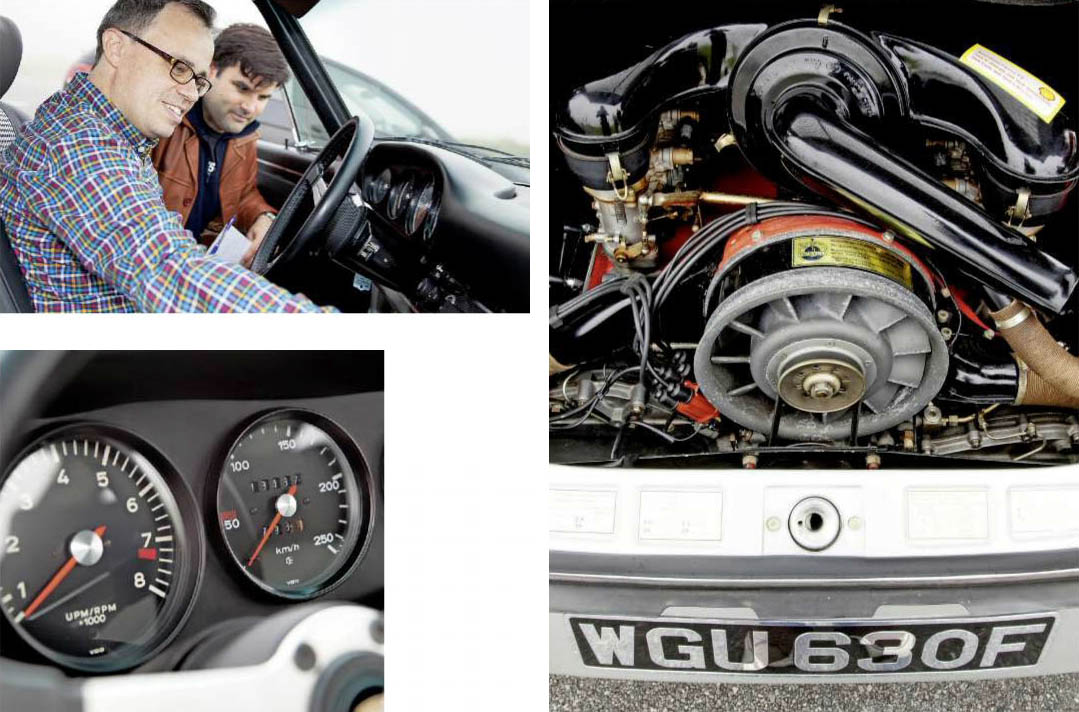 Carl’s engineer’s eye crawls all over the car at our next pitstop, pulling out all the little details. ‘Those Hella foglights are just beautiful,’ he says. ‘I’d like to nick them and use them as bedside lamps! And the interior is so elegant, so simple. Everything is just black vinyl and unpainted aluminium. There’s an honesty about it too – Porsche didn’t even try to hide the metal that holds the elements of the 911 badge together. I love it, I want it, and if I had the money I’d definitely have it.’

He has one last sit in the driver’s seat, then suddenly has a quick rethink. ‘Actually, I’d want it if it were worth a little bit less,’ he says.

‘Value and desirability are on very different and independent planes for me. The latter is obviously in the driving, but with values of these cars as they are, I’d be scared to thrash one whereas I can drive other, cheaper cars as their manufacturers intended.

‘However, if they ever come down in value, I’m having an air-cooled 911 – it’s as simple as that. I love the noise and that special sense that comes from having the engine slung way out back. Everything about it is addictive.

‘Also, as an engineer, I take genuine pleasure in Porsche’s attention to detail. On the surface the rear-mounted engine seems like a bad thing, but it was clearly engineered for traction off the line and out of bends. When you learn that, understand it, use it and appreciate the fine tolerances to which it’s been finessed, you realise how incredibly thorough Porsche’s engineers were, even in the early days of the 911.’ And that gearchange? ‘Well, it’s certainly tricky to master, but that would be a nice problem to have, wouldn’t it?’

Thanks to: Paragon Porsche, Mayfield – paragongb.com

Porsche’s 356 replacement first appeared at the Frankfurt Motor Show but Peugeot threatened a lawsuit, claiming it owned the rights to any three-number model codes with a zero in the middle should the car be sold in France. The 904 became the Carrera GTS, 906 became Carrera 6 and 901 became 911. Curiously, there was no such controversy when Ferrari launched the 308.

Porsche releases the Targa in response to calls for a successor to the 356 cabriolet. Concerns about crash safety and structural rigidity result in a roll hoop, detachable hardtop and zip-down plastic rear screen. It’s joined by the 160bhp S, which has Fuchs alloy wheels and anti-roll bars. Short-lived stripped-out 911R is the first of the race-ready models.

The next engine expansion allows the car to run on lower-octane fuel, increasing its popularity in the US. The T, E and S models continue, but the T and E start to converge when the T gets fuel injection. E and S models get front airdams in 1973, and the 1972 addition of the external oil-filler port behind the righthand door is deleted after it’s mistaken for the fuel filler cap at petrol stations.

Few have ever dared to restyle the 911, but the car created by a young and unknown Gandini came closest to production.

The Porsche 911’s shape is so instantly recognisable that Porsche itself is still pilloried for deviating from it even now, more than 50 years after its launch. However, its design development could have taken a very different path had the dream of one of Porsche’s most influential dealers been indulged.

Johnny von Neumann, together with fellow Austrian émigré and car importer Max Hoffman, was responsible for popularising Porsche and Ferrari in America via his dealership, Competition Motors Distributors. The 356 Speedster may have been New York-based Hoffman’s idea but it was von Neumann’s sun-kissed Los Angeles location and background in hot-rodding and racing that made it a West Coast phenomenon. Porsche took a purist approach to the 911’s engineering in the early Sixties, with particular concern for occupant safety and structural rigidity.

Bertone Roadster’s debut at the 1966 Geneva Motor Show was overshadowed by the new 911 Targa.

So when von Neumann contacted Stuttgart in 1965 to ask when the Speedster’s successor would arrive, Porsche had to admit that it had no plans in place. However, top brass agreed to give him a 911 to experiment with, with the potential for a production run of cars if it proved successful.

Much to Porsche’s surprise, von Neumann sent the 911 to Bertone where a young – and then-unknown – Marcello Gandini sculpted a radical new look for the German marque. He paid particular attention to cabin safety and structural stiffness by replacing the rear seats with a strengthened bulkhead and reinforced scuttle line. He also reworked the interior with a central instrument cluster that freed up more driver legroom.

Its shape was reminiscent of another recent rear-engined Bertone roadster – the Fiat 850 Spider – and the louvred headlight lids reappeared the following year on another Gandini classic, the Alfa Romeo Montreal.

The Bertone Porsche 911 Roadster was unveiled – productionready and on-budget – at the 1966 Geneva Motor Show with a projected showroom price of $8000; $2000 more than a Jaguar E-type, but less than Ferrari and Maserati rivals. The public liked it, Porsche rather less so. It lacked obvious Porsche visual identity, failed to attract meaningful advance show orders and projected profit margins were slim. To make matters worse for von Neumann, Porsche chose the same Geneva show to preview its new 911 Targa.

The Bertone 911 managed to survive the crusher, found a Californian buyer and has since been repainted black and fitted with Mahle wheels in place of its original Campagnolos.

Porsche, on the other hand, wouldn’t produce a full convertible 911 for another 20 years.

Carl works for engine design firm Ricardo, so he appreciates cars on a mechanical level. He has a taste for pure, uncompromised driving machines, which has led to a pair of Porsche 924s – one a 2.5-litre S – a Mazda MX-5 MkI and a Subaru Impreza.