The Bee’s Knees Alpinas old and new go head-to-head as we sample the Edition 50 models and the B7 S Turbos.   For its 50th anniversary, Alpina celebrated in style with its 600hp Edition 50 versions of the B5 and B6 and we’ve brought these latest turbocharged monsters to meet their illustrious forefathers, the awesome B7 S Turbos from the early 1980s. Words: AutoBild and Bob Harper. Photography: AutoBild. 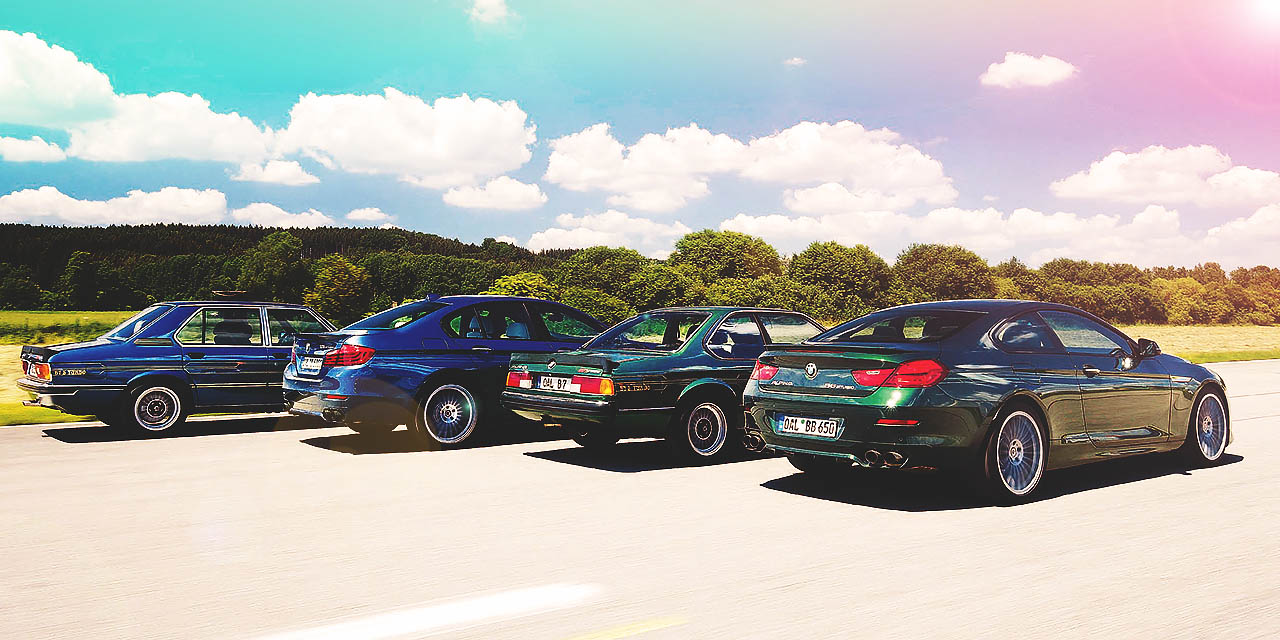 The question of what to buy someone for their birthday can be fraught with danger. How much to spend? Does the proposed gift strike the right tone? And most crucially, will the recipient like it? It becomes even harder when it’s a significant number… what to get someone for their 50th for example? For Alpina the answer was simple, for its 50th anniversary it would give itself and its customers two fantastic bespoke creations; the Edition 50 models based on its B5 and B6 Bi-Turbo Saloon and Coupé models.

These machines would have to be something really special – big power, high top speeds and a level of exclusivity befitting a company that prides itself on producing machinery for connoisseurs. With 600hp on tap the B5 and B6 have suitably high top speeds – the 200+ club is still a very exclusive place and both the B5, based on the F10 5 Series, and the B6, based on the F13 6 Series Coupé, can just muster the entry fee. They post figures of 204 and 205mph respectively which makes them the fastest road cars in the company’s history. This shouldn’t really come as much of a surprise as ever since Alpina started producing cars in close association with BMW its machinery has, for the majority of time, just had the edge over the equivalent BMW and the Bovensiepen family has always aimed to have no barriers when it comes to horsepower outputs or electronically controlled top speeds. 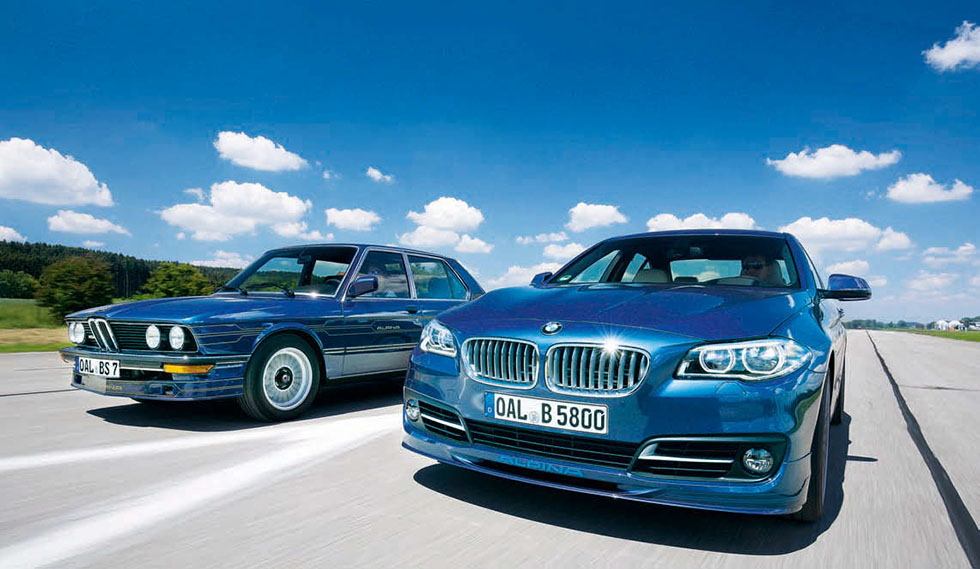 You only have to look back to the Edition 50’s spiritual ancestors, the B7 S Turbos from the early 1980s, to see that this philosophy has existed at the company for a long time. The B7 S models were based on the first generations of the 5 and 6 Series and like the Edition models of today both were produced in limited numbers, but can we see any similarities between the models of yesteryear and today’s machinery? To find out we had our own little anniversary party when we brought the E12 B7 S Turbo Saloon to go head-to-head with the B5 Bi-Turbo and the E24 B7 S Turbo Coupé to go toeto- toe with the B6 Bi-Turbo Coupé. It’s amazing to think that 30 years ago you needed 330hp to create one of the fastest saloon cars on the planet, yet today that’s more or less doubled to 600hp!

Before we get into the cars though it’s worth having a whistle-stop tour of Alpina’s history and its close relationship with BMW. Prior to the 1960s Alpina wasn’t involved with cars but in 1964 Burkard Bovensiepen produced a twin-Weber carburettor conversion for the BMW M10 engine in his father’s precision components factory. Units so equipped receive praise not only from the motoring press but also from BMW and its legendary sales boss, Paul G. Hahnemann. Indeed, BMW was so impressed that it certified the exceptional quality of these Alpina components by awarding BMW vehicles with the Alpina system the full factory guarantee. 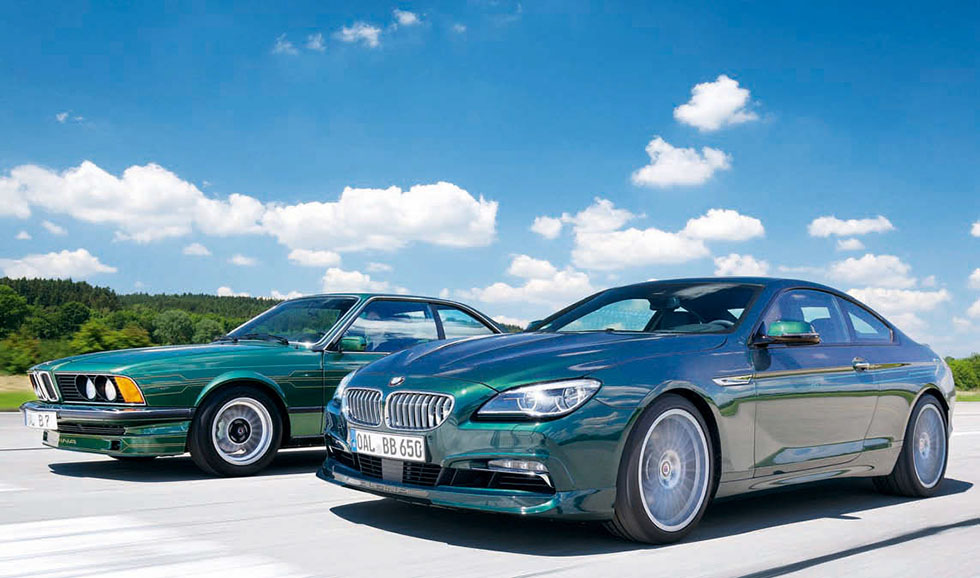 This meant that Alpina could now use the BMW distribution channels and expand rapidly. As well as extending the range of available Alpina tuning parts, Bovensiepen decided to launch an Alpina racing arm and with drivers such as Niki Lauda, Jacky Ickx, Derek Bell, Harald Ertl, James Hunt, Brian Muir and Hans Stuck behind the wheel there were plenty of successes on track. Despite much success with the CS Coupés, Alpina knew that if the car was further developed it could be a real world-beater on track and convinced BMW that a lightweight version of the 3.0 CS was needed to continue to be successful in Touring Car racing. BMW tasked Alpina with the project leadership for the lightweight 3.0 CSL Coupé.

Further wins came for the company and towards the end of the 1970s it launched its first range of Alpina-branded complete vehicles based on the E21 3 Series, E12 5 Series and E24 6 Series, and both the 5 Series and the 6 Series were turbocharged machines, with the B7 Turbos delivering 300hp from their 3.0-litre straight-sixes. They offered awesome performance for their day but by the early 1980s the new E28 Five was on the horizon and Alpina needed something a little extra to keep its customers’ interest until it had worked its magic on the new model. Hence the debut of the B7 S Turbo in 1981. It used the larger 3453cc straight-six – even though BMW was dropping that unit in favour of its new 3430cc unit – as the shorter stroke of the earlier engine made it more suitable for turbocharging. The compression ratio was dropped, a Pierburg injection and a KKK turbocharger were added and power was up to 330hp while torque peaked at 369lb ft. Top speed was 162mph and the 0-62mph dash was knocked off in just 5.9 seconds. 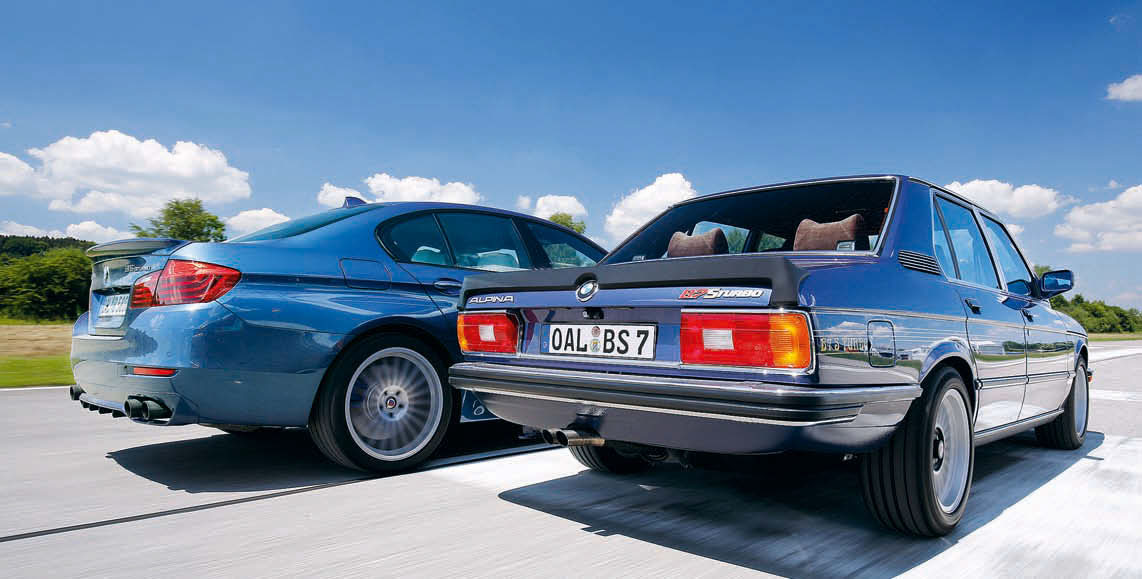 It made sense for Alpina to use the same powertrain for the E24 Six too, and thus the B7 S Turbo was born as a Coupé too, although the 6 Series version didn’t see the light of day until 1982. With the same power and torque outputs the E24 was also hugely rapid – 0-62mph came up in just 5.7 seconds while its top speed was 167mph. And like today’s Edition models both the B7 S models were produced in limited numbers – just 60 E12 Saloons and 30 E24 Coupés. The 5 Series could be had in just the one colour – what is now known as Alpina blue – while the 6 Series was only available in Alpina green. To go with the Alpina blue paint the E12s came with a gold deko set and wonderful slightly psychedelic ‘B7 S Turbo’ script on the rear quarters, something which was echoed on the 6 Series too. There were also some wonderful touches inside the 6 Series, with all cars having seats upholstered in blue and green tartan fabric with black leather side panels and bolsters. That the two B7 S machines were quick was a given but a look at an old Auto Motor und Sport test demonstrates just how effective these cars were. The E12 was timed at 5.8 seconds for the 0-62mph dash and 0-124mph (200km/h) was 20.3 seconds. Fast forward three years to a Car magazine group test of the supercars of the day and the Alpina was quicker to 62mph than a Ferrari Boxer and a Lamborghini Countach, and reached 124mph faster than both those cars could hit 120mph.

The Coupé was equally rapid – Sport Auto put one up against a 911 Turbo with some interesting results. The 0-62mph time for the two cars was the same and the Alpina was just 0.1 seconds slower to 124mph and had a top speed just one mph slower. A pretty decent effort by the B7 S as it weighed 150kg more than the Porsche and at 99,000 DM was also 7150 DM more expensive than Porsche range topper. Road and Track magazine tested a B7 S Turbo Coupé for a Yokohama tyre test and opined: “For sheer enjoyment on the road this Alpina is hard to beat,” although there were also comments to the effect that the bête noir of early turbo installs was apparent: “The turbo response of the B7 S was slow,” it said.

So, fast forward 30 years or so and Alpina once again has produced a couple of limited edition machines, this time to celebrate its 50th anniversary, and it’s apt and fitting that the company looked back to its illustrious history for inspiration. The B5 Bi-Turbo Edition 50 can be had as either a Saloon or a Touring and the B6 version comes as either a Coupé or Convertible. No prizes for guessing the exclusive colour palette – yup that’ll be Alpina green or Alpina blue and inside the company has worked a new twist on the old B7 S Coupé’s tartan trim with seat centres clad in Forest green leather with contrasting yellow and black stitching – sounds dodgy on paper, looks great in the flesh. The deko set is either in subtle blue or matt green and look brilliant – a suitably modern twist on a classic Alpina theme.

As always the engine is at the heart of the Alpina upgrade and while it’s based on the 4.4-litre twinturbo V8 from the 550i there are a host of Alpina specific parts that raise its power output from the 550i’s not insignificant 449hp to a mind-numbing 600hp. There are turbochargers built to Alpina’s specifications with large, flow-optimised wheels and housings. In addition, there’s indirect charge aircooling with short intake paths, optimised air filter housings, increased fuel supply and flow-optimised charge air ducting, too. Mahle high-performance pistons allow for a maximum charge pressure of 1.2bar and a compression ratio of 10.0:1. The eightspeed auto is built to Alpina’s specification and is programmed with unique Alpina software – as is the electronically adjustable suspension.

Elsewhere there are a number of bespoke touches for our modern duo. Uprated brakes featuring 395mm front discs with Brembo four-piston callipers nestle behind some bespoke forged 20-inch Alpina rims – 10-inches wide at the front and 11-inches at the rear – and these lightweight items save nearly 16kg in unsprung weight. Performance from these two beasts is simply scintillating with just a cigarette paper’s difference between the two cars. With 600hp and 590lb ft of torque you should be able to imagine that they are light years ahead of the B7 S models – 0-62mph comes up in just 4.2 seconds and both the Saloon and Coupé are genuine 200+mph machines. Their 0-124mph times are perhaps most telling though. Cast your mind back to that Ferrari Boxer or Lamborghini Countach as tested by Car magazine which managed 0-120mph times of 21.0 seconds and compare that to the B6 Bi-Turbo Edition 50 which will reach 124mph from a standstill in just 12.7 seconds. And then remember that the B6 weighs the best part of two tonnes! Yup, performance cars have come on quite a pace over the last 30 years or so. We won’t try to pretend that the older machinery feels anywhere near as fast as Alpina’s two latest performance icons. Naturally enough, though, some of the difference in performance is down to tyre technology – 30 years ago 225 section Michelin Primacy tyres might have been cutting edge but they have nothing on the same company’s Pilot Super Sports measuring 295mm wide on the back of the B6. Both generations of machine sound pretty stunning, although they have very different soundtracks thanks to their different configurations and the system in the new cars has been tailored by Akrapovic to really bring out the best of the V8 rumble.

While the older cars can’t hold a candle to the performance of the newer machinery they’re still a huge amount of fun to punt along at speed, but after a trip out in one of the newer cars you really do have to recalibrate your senses when it comes to braking and cornering – the big Brembos of the new cars washing off speed far more effectively and the grippier tyres allow for much higher cornering speeds. But somehow the older machines are more involving, more entertaining – you have much more of a feeling of being part of the driving experience and the entertainment starts at much lower speeds. That’s not to say the Edition 50 cars aren’t entertaining, it’s just that they do things in a completely different manner.

The performance is brutal – you’re unlikely to find yourself behind a Saloon that offers up more bang for your buck than the B5 Bi-Turbo Edition 50. As a birthday present that bridges the gap between the 1980s and the present day these Edition 50 machines take some beating.