Lancia Fulvia Sport and Alfa-Romeo Junior Zagato 2014 / 2015 Drive-My
Rate this item
(4 votes)
Tagged under
Read 4508 times Last modified on Thursday, 02 August 2018 23:02
Tweet
Tucked away in the heart of Colchester, Essex is First Site - the towns bespoke centre for contemporary art. Built on a steel frame and clad entirely in TECU Gold - a malleable copper-aluminium alloy - its a mesmerising, vet controversial, combination of arcs, sweeping curves and angles. It’s the perfect foil, in fact, for our Lancia Fulvia Sport and Alfa Romeo Junior Z, cars whose own distinctive styling polarised opinion in period, and continues to do so today.

Neither would look out of place displayed inside as a modern art installation, but out here on this busy Saturday afternoon the locals seem a little perplexed. Stepping closer to view badges and scripts fails to bring clarity to proceedings: "‘Never seen that one before.”

Our appreciation ratings are hovering around the 50% mark - Marmite would probably yield the same result. Even photographer Mann isn’t immune: “Beautifully ugly,” he calls them.

Ah, the wonders of a coachbuilt body, and from that most eccentric of Italian styling houses: Zagato. Never one to follow fashion for its own sake, the carrozerria - founded in 1919 by Ugo Zagato, to bring the aeronautical principles of lightness and strength to the automotive world - has always been at the forefront of design, going its own inimitable wav. At some point, almost all of the world’s prestige automobile manufacturers have come calling - some more than others. First up, Lancia.

Its coupe version of the Appia replacement, the Fulvia, appeared in 1965 - two years after the stubby four-door saloon. Designed in-house, the car was both purposeful and dynamic in appearance, with quad headlights and a compact, box-like silhouette.

Its older sibling’s wheelbase had been chopped by 7in but the underlying mechanical basis remained the same, with a gem of a chain-driven, slant-mounted V4 engine mated to a tour-speed all-synchromesh gearbox. It was mounted on a separate subframe and drove the front wheels. Transverse-leaf independent front suspension and disc brakes all round completed a skilfully engineered package. 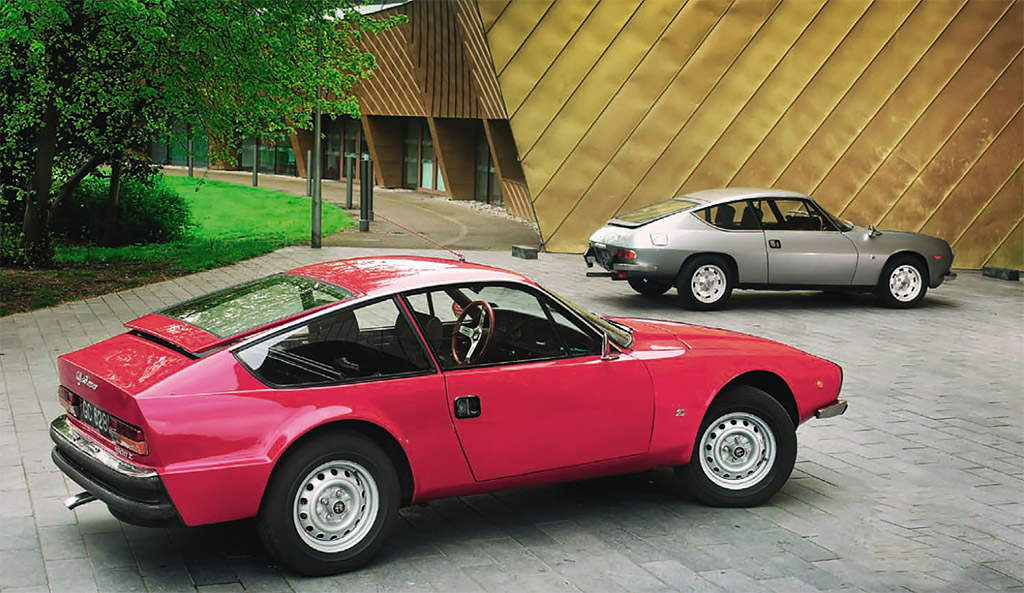 The designs are similar in profile, with the Alfa defined by its sharper extremities. Note that the opening rear Katch is shared by both cars.

With large engines attracting punitive taxes in Italy at the time, a thriving market developed for unorthodox coachbuilt versions - of smaller-engined cars. With this in mind, Lancia took up an alternative, Zagato-proposed body style and the Fulvia Sport launched in 1967. If wealthy Italians were prepared to pay through their nostrils to ‘stand out’ on the road, then Ercole Spada’s bespoke aluminium bodywork certainly did that - and then some. Looking like nothing else of its time, it was slightly wider and longer than the coupe, and commanded a hefty price premium as it took its place as the prestige model at the top of the range.

'BOTH GAVE A PERFORMANCE HIKE OVER THE STANDARD CARS, BUT IN REALITY YOU BOUGHT THEM WITH YOUR EYES ALONE'

After Fiat’s takeover of Lancia in 1969, the modified Series 2 Sports appeared with an all-pressed steel body, an increased power output of 90bhp, and a five-speed gearbox - generally considered by Lancia fans to be inferior to the four-speed unit - plus a number of detail alterations. Engine changes followed those of the coupe before the final iteration - imported and sold in the UK in 1972-1973 - meant that the 1300 Sport bodyshell also received the cooking 115bhp 1600 engine from the rally-tuned HF, to give it serious dollops of go. Just 80 of these right-hookers reached British shores. 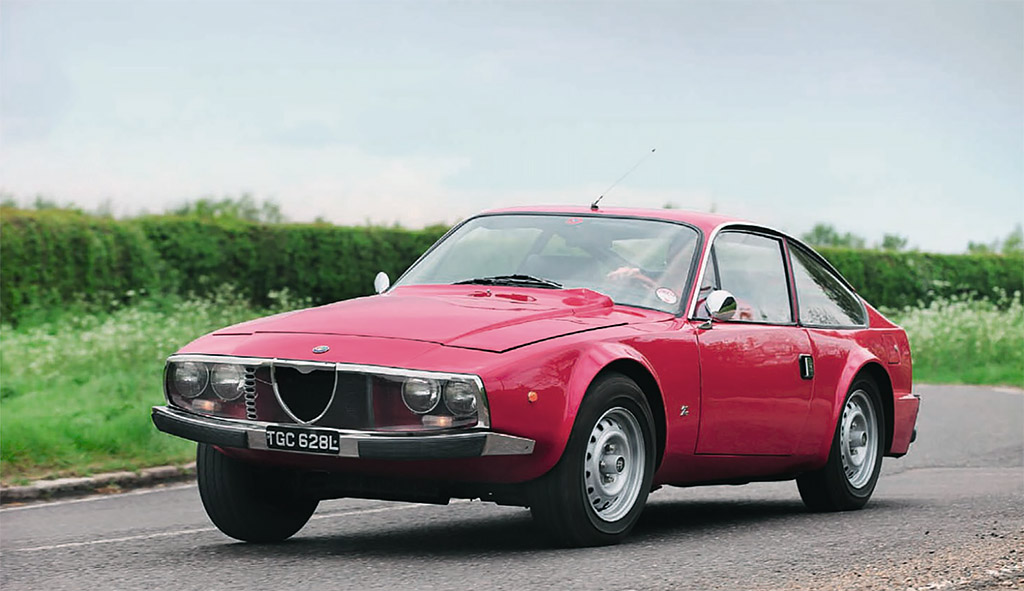 Over at Alfa Romeo, CEO Giovanni Luraghi had identified room - in a range that included Giulia Super, Spider and GT Junior - for an original, compact and sporting GT. At the 1967 Turin Motor Show, he met Gianni and Elio Zagato, and the underlying principles of die new vehicle were agreed. In order to improve both performance and handling, it would have a compact streamlined design and lightweight construction, combined with a stiff body. Finally, the styling would be original enough to differentiate it from the existing Pininfarina-designed Spider and Bertone-penned GT Junior.

Once again the job fell to Ercole Spada, and the resulting design was provocative in the extreme. The Junior Z’s alluring outline, truncated at the rear and tapered forward into an aggressive wedge at the front, had real visual drama. Released in 1969, the end result of this idiosyncratic design was - thanks to a painfully complex production process - fiercely expensive.

From a technical point of view, there was nothing new to see here. The car sat on a Spider chassis and had tried-and-tested Giulia underpinnings driving the rear wheels, with the trusty twin-cam 1290cc four-cylinder engine achieving 103bhp. There were twin Weber 40 carburettors as standard, plus a five-speed gearbox and four- wheel disc brakes. In 1972, the 1600 Junior Z arrived, with the larger engine further increasing power output to 114bhp. Thanks to sleeker aerodynamics, both models offered a slight performance hike over the cars that had donated their workings, but in reality these were machines that you bought with your eyes alone.

Today, with the Lancia and Alfa side by side, it’s clear that to an extent the earlier Fulvia Sport inspired the Junior Z. It shares the same sweeping profile in the roofline, but while the Lancia has a somewhat bulbous front end and delicate rear, it’s the reverse for the Alfa, with its sharp rear and that fine slope of its nose.

‘SPEND A LITTLE TIME WITH EACH, AND IT’S CLEAR THATTHE SPORT IS FINISHED TO A HIGHER SPEC'

The subtle flaring applied to the Sport’s front wheelarches, and the lack of any on the rear, gives the bodywork a clean, narrow feel, while the raised bonnet and muscular arches of the Junior Z lend it more of a sporting intent. Both have imposing front ends, but look closer and it’s the fine details of the Junior Z that delight: from that Plexiglas snout with Alfa grille-shaped aperture and ventilation slats on one side, to the origami effect on the top of the bonnet, as the metal folds around the windscreen wipers. 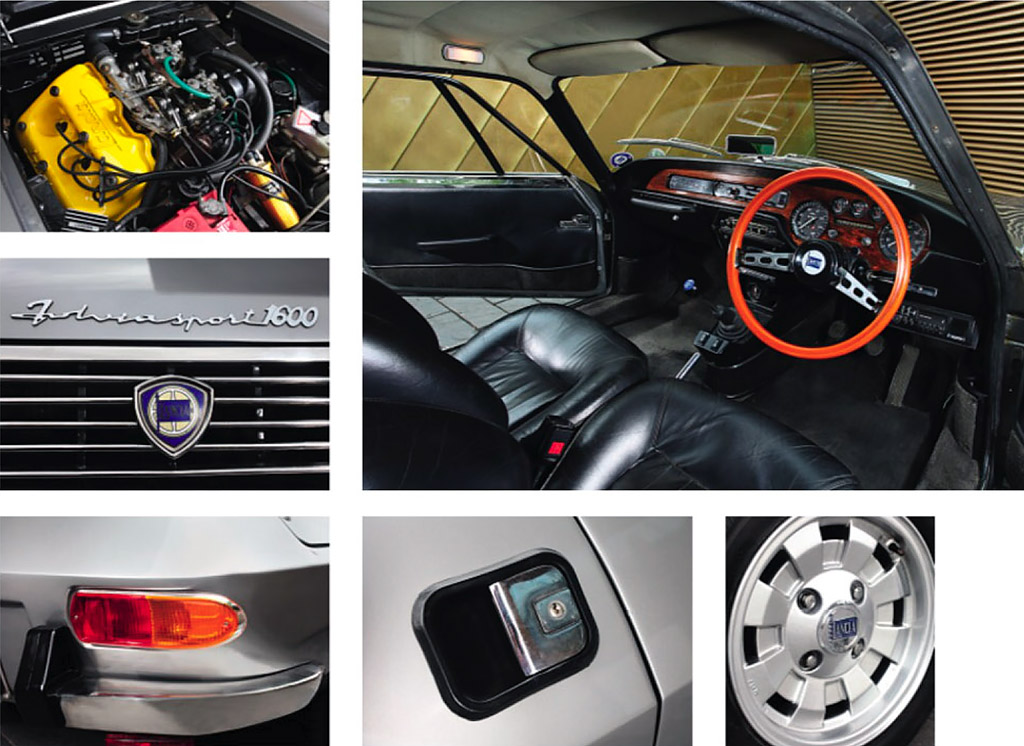 It comes as no surprise, then, that the custodians of our featured cars mention aesthetics in their reasons for buying one. Tim Heath has owned his 1600 Sport for eight years. “My other half had at some point said she liked the styling,” he says. “Also it complements my 1600HF and, having the same mechanicals, it was something that I was familiar with.”

Heath commissioned a bare-metal restoration in 2007, at the same time strengthening the car by having the inner and outer wheelarches seam-welded and adding Davtona-style Plexiglas covers to the rectangular headlights. “It’s smooth, fast and quiet,” he says, “and fairly economical for long-distance trips to Europe.”

Over in the Alfa camp, Charles Cook bought his Junior Z four years ago for similar reasons to those who bought them in period. “It’s a very pretty, coachbuilt limited-production model from a manufacturer whose cars don't cost a fortune to run," he says.

It was originally a 1600, but a previous owner had a 1750 powerplant fitted in Italy: “It’s inherently a stronger engine than the 1600 and, with a bit more power, the difference over my SS 1600 is noticeable.” Cook cites the driving position for those over 6ft as the car’s only downside.

At first glance, both cars appear similarly appointed inside, but spend a little time with each and it becomes clear that the Lancia is finished to a higher specification. Small things stand out, such as the smooth action of the interior door pull, the wooden facia and Veglia instruments, but it’s the manner in which the Sport’s seats cosset you that gives you confidence that even after a long journey you’ll still step out feeling fresh. On the dashboard is a button for the electrically operated rear hatch, which lifts for extra ventilation - and also serves to confuse fellow road users, who helpfully mime actions telling you that it’s open.

The similarities continue in the Junior Z because it shares that signature mechanism - and the same door handles - but although it’s a smart interior it’s a little more basic. There are no electric windows and, while the oval dashboard mimics the grille, the facia looks like a DiY job. You sit much lower with legs and arms outstretched, and the gearlever jutting out almost horizontally towards you. If you were spending long periods of time in either, then the Sport would have it on points.

On the road, the Lancia’s V4 ticks over like a finely engineered watch, and once on the move it is exquisite. It thrives on revs and you soon find yourself shifting through the precise dogleg gearbox with haste to ensure that it stays in the optimal 4000-5000rpm zone. Sound deadening in the cabin is first class but it filters through enough intake noise to keep a smile on your face - ditto lifting that rear hatch, to better appreciate the exhaust’s slant-engined rasp.

The simple suspension set-up - there’s a dead axle and leaf springs at the rear - is damped for comfort rather than sport, so it’s less frenetic and, to a certain extent, dynamic than its HF sibling. There’s little roll, however, and the road- holding is superb. The brakes - Girling four-pot calipers front, two-pot rear - are excellent, and complete a highly specified package.

Despite its GT pretensions, the Junior Z is more of an old-school sports car. At low speeds it feels a bit uninspiring, but floor the pedal and that venerable twin-cam comes to life. Compared to the Sport, the powerband is more toward the mid-range, and this example’s 1750cc engine ups the torque further.

The experience benefits from the cabin’s lack of sound deadening, low seating position and the perfect weight of the steering. It’s more exciting and aurally visceral than the Sport, which seems as if it is the more accurate machine but somewhat at the expense of feel. Only the Junior Z’s damping lets it down a little, certainly in comparison to the dignified ride quality of its rival - a surprise given die Sport’s relatively old- fashioned design.

Even though their methods of delivery are fundamentally different, both cars offer similar driving experiences. The Alfa is more of a blunt sporting instrument, but the Lancia retains a degree of civility while being a great driver’s car.

It is, however, in the aesthetic department that they’ve always been judged - and still are. For a number of decades, both cars suffered in the shadow of their more conventionally attractive siblings. Today, their eccentric looks lie at the heart of their unique appeal and, if anything, the Junior Z manages to out-quirk the Lancia. That said, there’s a certain something about the shape of the Fulvia Sport - to my eyes at least.

If both cars looked like nothing else on the road when they were new, you can multiply that by a factor of 100 today.

Zagato-bodied Alfa Romeos had an exceptional history of racing success, stretching back to the Mille Miglia-winning cars of the 1920s, through to the exquisite Giulietta SZ, plus the Giulia-based TZ1 and TZ2 road-racers.

Although seemingly of the same breed, the Junior Z's Grand Tourer nature - plus the success of the Autodelta GTAs - ensured that it never tasted competitive action other than with privateers.

Over in Turin, Lancia hadn't gone racing under its own banner since the sale of the company in 1955, and the transfer of the racing team's material to Ferrari. Zagato derivatives of the Appia and Flaminia raced in private hands, but the situation changed with the Fulvia. Between 1967 and 1969, the Milan-based coachbuilder modified 27 Sport models for the HF Squadra Corse factory race team, lightening and strengthening the bodies, before fitting them with HF 1300cc engines.

These Competizione variants would achieve outstanding class wins at the 1969 24 Hours of Daytona and the 12 Hours of Sebring - the latter with an HF 1600 engine fitted - driven by Claudio Maglioli and 'Lele' Pinto. 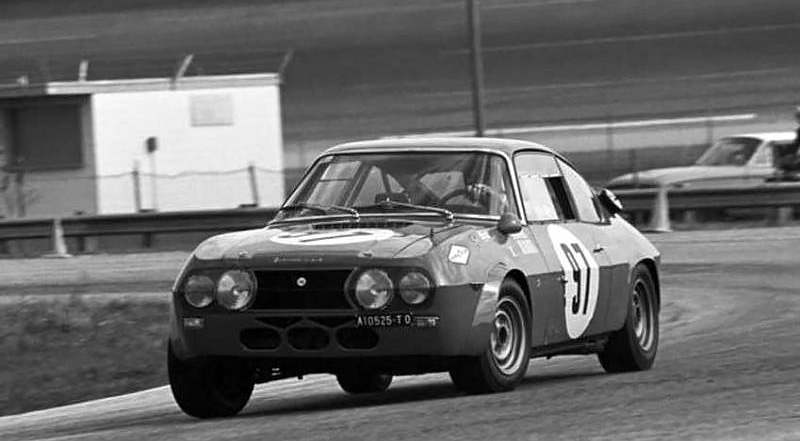 Right: Maglioli and Pinto head for a class victory at Sebring in 1969.