BMW South Africa has never been a company to rest on its laurels, and its aggressive belief in itself and its products can amount to a single minded fervour. This has already given South Africa the mighty M1-engined 745i E23 - a local development quite different from the European machine of the same designation, which may well be the weaker car of the two. Now BMW SA has done it again with the dramatic 333i — its own creation, paralleling the potent M3 which was recently launched in Europe to curb the rampant success of the Mercedes-Benz 190E 2,3-16 W201. 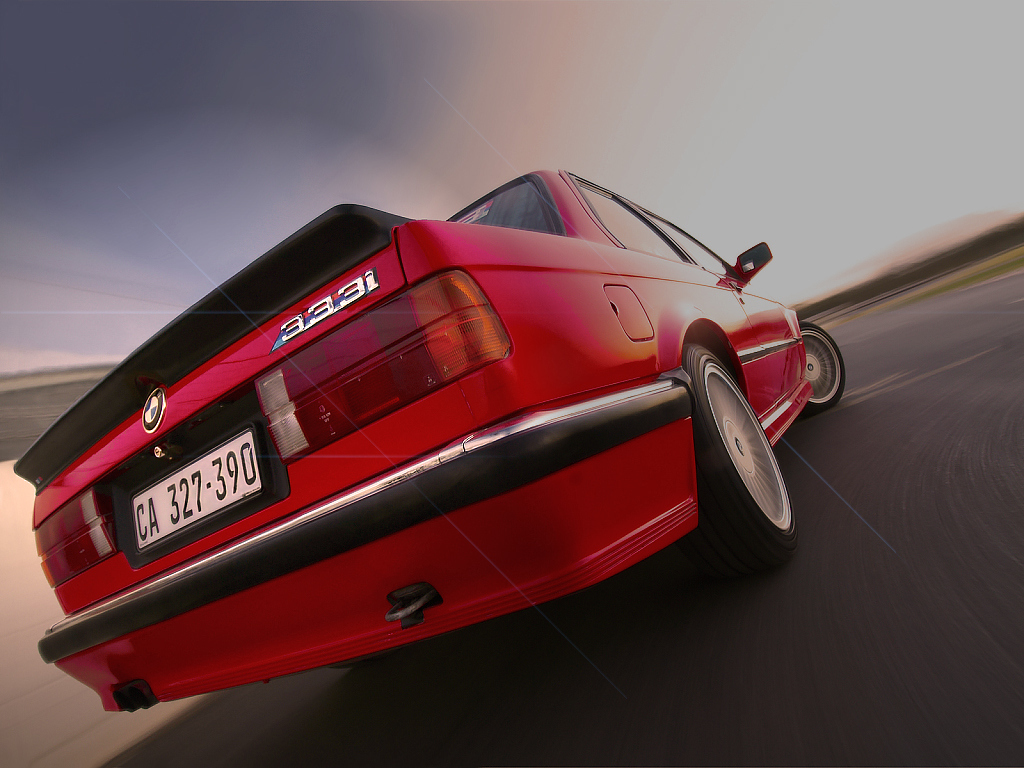 As occurred with the BMW 745i E23, BMW SA plotted its own course to build a really mighty 3-Series machine and eschewed the 2,3-litre, 16-valve, four-cylinder route used for the European M3, in favour of a favourite local "recipe": a big engine,  snugly installed in the available underbonnet space. While this has been a traditional South African solution to a quest for more performance, BMW has applied it with remarkable style and engineering integrity. 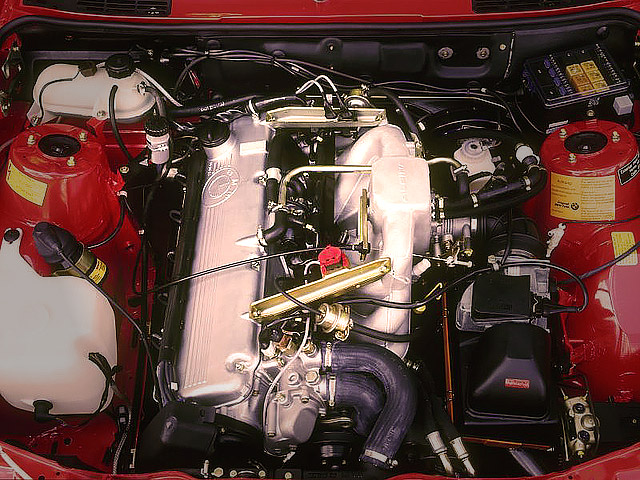 The engine selected is the 3.2-litre six M30B32 used in the 733i E23, and it drives through a Getrag close-ratio five-speed gearbox.

The car has modified suspension, wide tyres on Alpina alloy rims and tastefully integrated aerodynamic appendages, while under-the-skin development work has been undertaken by both BMW SA and Alpina, the specialist German tuning firm.

The 333i has stunning looks, with its crisp two-door styling strengthened by a deep front spoiler, side skirts and a rear end panel incorporating a sweeping lip, to smooth the airflow from under the car. A black boot spoiler completes the package. As all the performance “extras” are painted in body colour, our charcoal black test car had an almost menacing air. The big, severe Alpina wheels stand out quite strikingly, thanks to the tyres' shallow sidewalls.

However, the E30 333i is not overtly different from its lesser stablemates in the manner of the Mercedes-Benz W201 2,3-16, for example, and this relative unobtrusiveness should appeal to many. The clincher is the 333i badge on the bootlid, backed by BMW's red and blue Motorsport stripes.

The interior is finished in hide upholstery, with matching (vinyl) door panels and a high level of luxurious appointments. In the test car the leather and door panels were in smooth cream with beige carpeting and black mouldings. The BMW Motorsport front seats give excellent support with a wide range of adjustment, although they share with other BMW’s the disadvantage of lever ratchet adjustment for backrest rake, instead of a safely adjustable wheel. The rear seat is also finished in leather and internal space is the same as in other 3-Series models - no more than adequate in the back.

No four-door E30 333i is available and probably never will be, while the rear windows, even in this upmarket model, are fixed. The fascia has the ergonomic perfection found in other 3-Series cars, specified to 323i E30 level and incorporating an Alpina instrument cluster with a 270 km/h speedometer. The most noticeable change is the substitution of a combination instrument for one of the barrel dash vents, just to the left of the instrument nacelle. This fits onto the vent's mountings and swivels in the same manner, while airflow is retained through small slots on either side of the central digital read-out panel.

This monitors engine oil and rear axle oil temperatures, engine oil pressure and manifold vacuum, but is confusing until you decipher the German labels which accompany the red LED displays. The small diameter, three-spoke steering wheel is leather-bound and has a pleasantly tactile feel.

Production cars will come with electric windows, leather upholstery, tinted glass, inertia-reel seatbelts, front and rear headrests and twin electrically adjusted mirrors. They will offer a choice of four colours - aero silver, henna red, ice white and diamond black. The only item missing on the test car was air-conditioning, for which BMW SA has since found the necessary space beneath the packed bonnet. This means that customers will not, after all, have to choose between power steering and air-conditioning; our car had the former, though we would have preferred the latter. The variable ratio power steering has advantages only in town or in low speed manoeuvring, as it has minimal effect at higher speeds.

At first glance the engine compartment appears so full of engine that only the Porsche 928S' V8 presents a tighter fit. However, closer examination reveals that it is carefully laid out to provide reasonable access. One obvious modification is a special Alpina inlet manifold and plenum chamber which fits down beside the engine instead of snaking over the top and contributes to improved low speed tractability. Alpina also supplied the substantial cast alloy, copper cored radiator, a special exhaust manifold and revised control profiles for the Bosch L-Jetronic fuel injection system.

The changes made to the engine do not alter peak power or torque outputs, which occur at the same revs, but they do substantially alter the torque curve, boosting it significantly in the lower rev range and flattening it out. The engine thus generates 145 kW at 5500rpm with 285 Nm of torque at 4300, and it turns the new 3-Series E30 flagship into a real stormer.

The Getrag close-ratio gearbox has a “racing” gearshift pattern with first gear to the left and back, while reverse is forward, opposite first, with no lockout other than a very slight dogleg. While this type of change makes sense for autobahn cruising or competition, around town it can become irritating, requiring a heavy shift between first and second, with the gate to negotiate on the way.

The rear axle incorporates a 25 per cent lockable limited slip ZF differential, while the car has BMW's excellent all disc braking system. There are two options available, however, and the test car was fitted with both. The first is the use of 296 mm ventilated and grooved Alpina discs with special calipers in front, and the second is ABS. Moreover, the ABS system makes use of an hydraulic pump (as in 5- and 7-Series models) instead of vacuum boosting, as on other ABS equipped 3-Series models. This gives a more positive pedal feel and is quieter in operation.

The suspension has been tuned by BMW's Motorsport division and although the layout and geometry are the same as for other 3-Series E30 cars, Bilstein gas dampers are fitted and the spring rates are slightly stiffer.

The 333i is predictably spectacular in a standing start, easily spinning its rear wheels in howling abandon and sending wreaths of expensive blue Pirelli smoke spiralling out from the wheel- wells. It takes careful co-ordination to get it to leave the line cleanly but a solid stream of power then hurls it to 100 km/h in just 7,23 seconds and on to cover the kilometre in 28,08 seconds.

In our top speed run the little projectile clocked a true 231 km/h, with 240 registering on the clock. In between it's equally impressive, with an overtaking figure of 2,10 seconds from 80 to 100 km/h in third gear, for example.

In fact, the mid range acceleration and extended flow of torque, even from low revs, make the 333i a magnificent long distance car, capable of impressive point-to-point times. In relatively fast moving traffic it becomes a secret weapon, able to punch past with a decisive and safe blast of power, while in any gear, the surging build-up of speed seems to go on and on...

In sheer performance terms it deals with the Mercedes-Benz W201 190E 2,3-16 very nicely, although its character is entirely different. The BMW has brute power and can't really match the Mercedes-Benz in chassis refinement or fuel consumption. When the enormous price difference is considered the E30 333i represents tremendous value, but even when judged on its engineering merit alone, it offers a worthy alternative many people would prefer.

In many ways, the BMW E30 333i is a much smaller 745i: as a total package, it is a very effective high performer, but like the E23 745i it is a little heavy-handed in some areas. Sometimes its motor delivers more power than the chassis can handle when driven really hard, and in some situations, traction becomes disappointing.

The car's balance is excellent and handling alters progressively from a fair amount of understeer to power induced oversteer, although backing-off in a corner can induce such severe oversteer that full opposite lock has to be used to catch the tail. For the skilful driver, these characteristics can be a real pleasure, but for a novice they could be frightening.

The 333i is a car to treat with real respect, for while the level of grip is very high, making the car feel taut and secure, in extremis the chassis requires skill. In the wet, it is always edgy and even in the dry it sometimes gives a little squirm which might develop into a slide, were it not for those amazing Pirellis. The brakes are really excellent.

Despite the shortcomings in handling refinement, the 333i is a magnificent car to drive. Its compact size and refined powertrain make it extremely versatile - you can drive it lazily and gently to the supermarket, or you can. make it really fly, all day long, with no fear of problems. The only cost you have to count is for fuel, which is burned pretty rapidly when full power is used.

During our test period we recorded 16,6 litres/100 km overall but this included performance testing and a session at the racetrack. On the other hand our Fuel Index — steady speed consumption at 100 km/h, plus 40 per cent - came out at a respectable 12,57 litres/100 km - an attainable average. Steady speed consumption figures, as reflected in our tables, are excellent ’for a car of this performance.

To at least one of our test team, the 333i E30 is the most satisfying BMW we have yet tested. It is fairly discreet and handily sized and in many ways. It is the epitome of what BMW stands for. While it is expensive, when compared to the cars it rivals, it's a bargain. (Graphs overleaf). 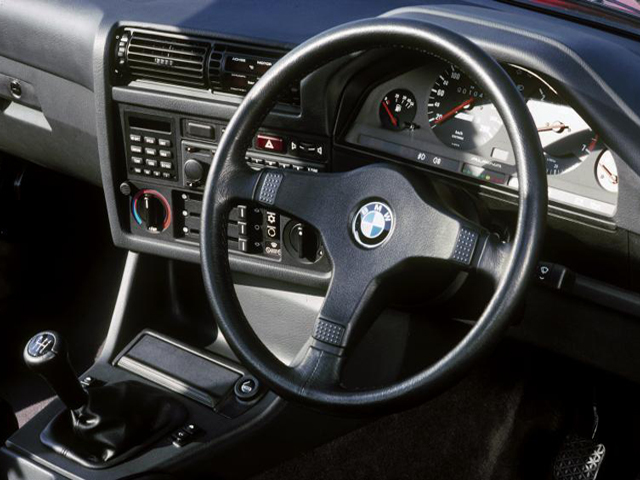 The cockpit is the same as in the 323i E30 (above), except for Alpina instruments which include a 270 km/h speedo and a digital read-out panel mounted in one of the central air vents. The leather- bound wheel is new and the comfortable sports seats (below) are upholstered in leather. 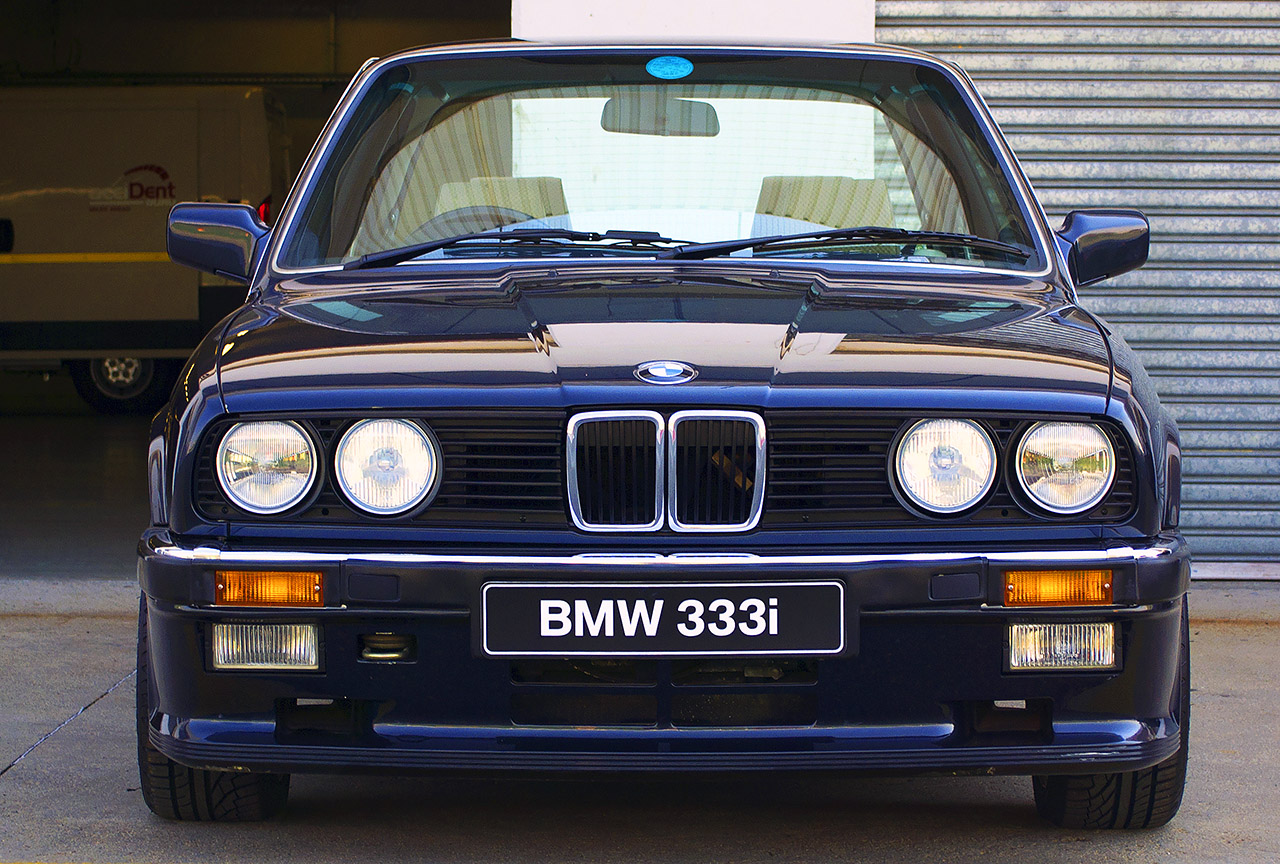 The 333i is not obviously different to other 3-Series E30 models at a casual glance.