BMW 3.0 CSi E9 – test-drive. Everyone loves the BMW 3.0 CSL, especially in its homologation-special ‘Batmobile’ guise. Thin, lightweight panels, fatter wheels, a general air of race-honed purpose overlaid with an exuberant straight-six howl... how could anyone resist that concoction?

In truth, though, the 80kg or so it shed relative to a regular 3.0 CSi E9 brought its own problems. Rust was the obvious one, owing to a lack of undersealant, a floppier body structure was another, and the ease of denting the aluminium opening panels was a third. Maybe a CSi makes a better, more usable road car. That’s why this fine red example has joined our group test.

‘Of all the cars here, the BMW feels the most modern in the conventional sense, even though others are newer or more forward-looking’

Visually, this red one isn’t far short of a CSL anyway. Its Alpina wheels are similar to the CSL style, albeit of 16in diameter rather the BMW’s original 14-inchers. And it even has the deep front valance normally fitted to a CSL only if someone had broken into the box of homologated racing bits that might have been delivered to the first owner. In standard road trim the CSL didn’t wear that front spoiler, although its wheelarches were racily extended with brightly polished aluminium lips, and the upper flanks wore go-faster stripes. 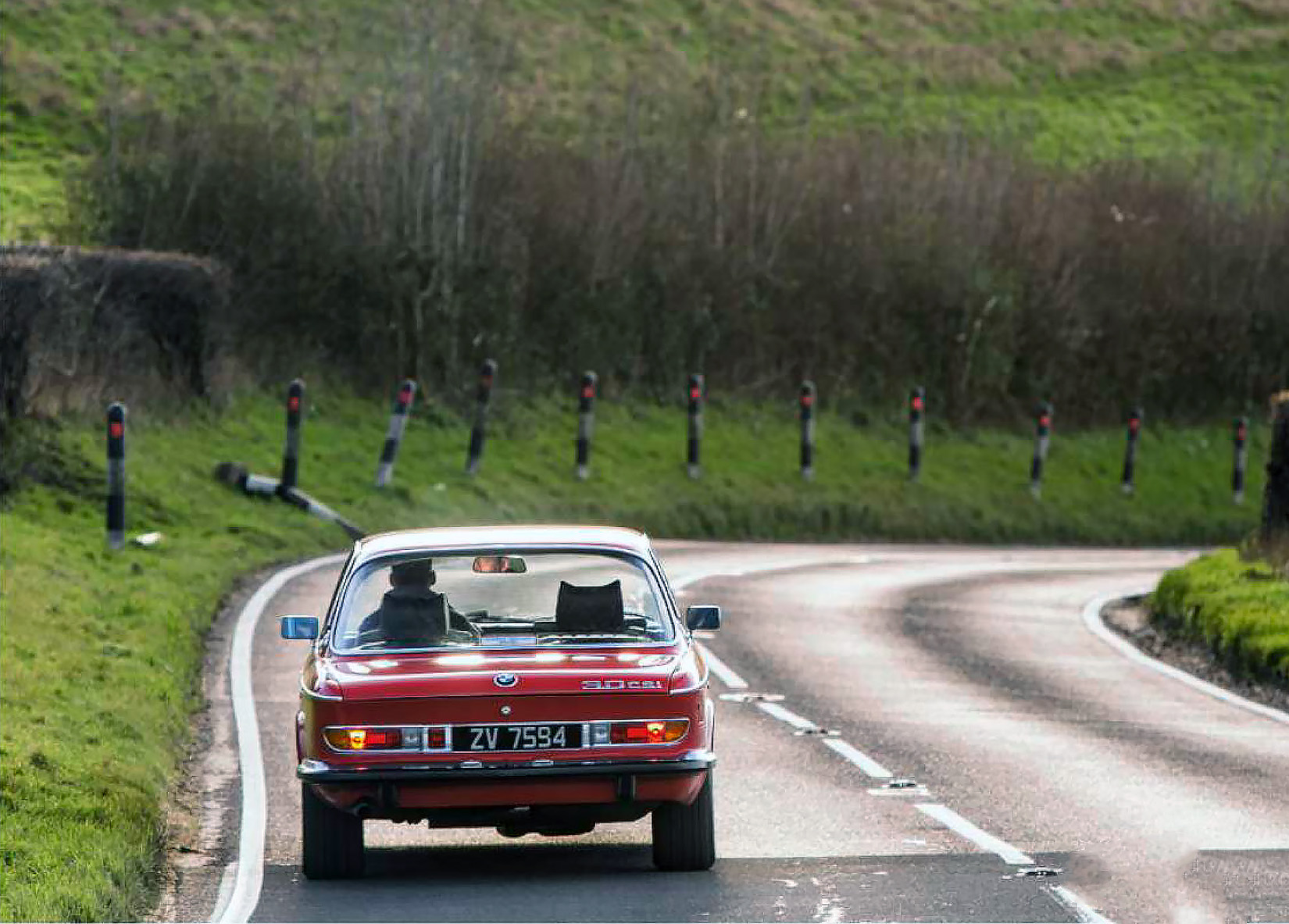 Our car looks low, mean and ready for a spirited blast on a B-road. It’s the most overtly sporty-looking car here, and the only straight-six. That’s somehow fitting, because in today’s world of new cars BMW is about the only carmaker left that still builds straight-sixes.

This BMW’s a delicious-Iooking device, all slim pillars and glinting highlights, with a tantalising air vent in each front wing and an air of slight menace missing from the first versions of BMW’s Karmann-built CS models. Under the bonnet is a 2985cc fuel- injected version of BMW’s M30 sohc engine, a family that had started at 2.5 litres and eventually reached 3.5 litres, lying inclined beneath a giant cast-aluminium plenum chamber from which six inlet tracts do a U-turn en route to the cylinder head.

Not as plush as the Jaguar, but that just adds to the BMW’s immediacy. Straight six 3.0 M30 BMW engine gives a grand 200bhp howl.

I love BMW interiors of this era. They are open-plan and airy, with a delightful no-nonsense functionality. This is one of the best, with a dashboard consisting simply of a full-width shelf on which sits a four-dial instrument pod. This and the curved, vertical panel between windscreen and shelf are faced in stain-finished wood veneer, an unnecessary embellishment but a typical Germanic take on tree-use; it continues along the doors. A wide, squat console sits beneath, as does a glovebox on the passenger’s side. Rear seat space is minimal for anyone with legs.

In place of BMW’s standard three-spoke steering wheel is a Moto-Lita item, slightly smaller and thicker of rim to match the extra bite of this car’s wide, 225/50-section Pirelli P7s. This is the first car we’ve covered so far in this test to have a worm-and-roller steering box rather than a rack, although the Mercedes and the Fiat also use a similar system. It takes just a couple of quick bends to show that it doesn’t matter at all.

I take aim, feeling the front wheels bite into the corner like a good hot hatchback’s, point that wide, flat bonnet with its pointed snout at the apex, feel the loads build up through hands and posterior, and power through in archetypal taut-sinewed, rear-drive fashion.

The steering’s fractional softness around the centre vanishes as soon as there’s any semblance of lateral g-force, replaced with a precision and transparency I didn’t quite expect. There’s no power assistance but nor does there need to be, despite these broad boots. Manoeuvring is the only time a driver might yearn for it.

The seats are very supportive, holding me well as I thoroughly enjoy the CSi’s energy, helping to damp further an already calm, disciplined ride.

And the engine? It feels smooth but a touch dozy at low revs, then comes to howling, joyful life as the tachometer needle passes 4000rpm and I realise that 200bhp really does live here. This BMW will touch 60mph in well under eight seconds (a CSL scores 7.2) and reach an honest 130mph, with a revabilitv well beyond 6000rpm to make up for having a gearbox with just four forward ratios.

Of all the cars here, the BMW feels the most modern in the conventional sense, even though others are newer or more forward-looking.

It’s the most fun, while likely to prove durable and dependable. Still want that fragile, expensive CSL?

‘For running costs, the E9’s not too expensive. The challenge is keeping the bodywork in check - something will always need attention. E9s don’t like being left idle - the brakes will seize when not in use, and things like slide control or cold start valves seem to be prone to failure. They need frequent tweaking to keep them in tune. Parts are available, but there’s the concern they’re not always going to be. I’ve not had any problems sourcing bits, however.’