Pininfarina-penned lines bring glamour to every destination. Peugeot 504 Coupe test-drive. There’s a V6-engined one of these too, using that strange engine co-developed by Peugeot, Renault and Volvo as three- quarters of a stillborn, energy-crisis-scuppered V8, but the timewarp 504 Coupe here has the 2.0-litre, overhead-valve, slant- four fitted to most 504s after 1970. This 1978 car has the Kugelfischer fuel-injected version with a modest 106bhp driving, via a four-speed gearbox, rear wheels independently sprung by semi-trailing arms.

So far, so normal, apart from the fiendish complexity of that Kugelfischer four-piston injection pump with its own private oil supply. Now look at it. The regular 504 saloon is a bit of a frump, despite its trapezoidal headlights and curiously bevelled tail, but the Coupe and its Cabriolet sibling are gorgeous. All these body styles are the work of Pininfarina, but the pens and brushes roamed more freely with the glamour versions and the Torinese styling house also got to build them. 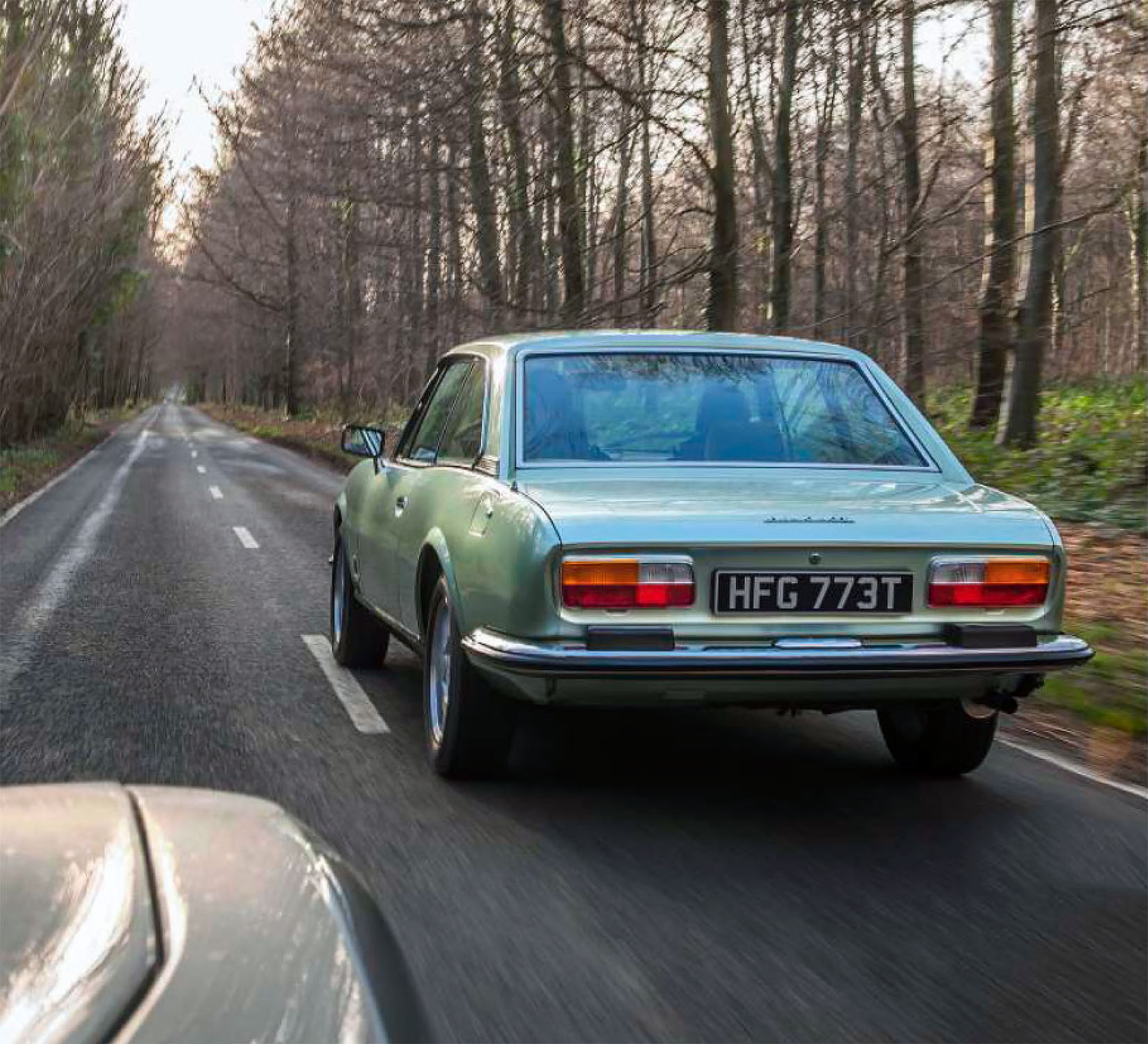 Metric tyres mean sourcing the right rubber can be wearisome

Look at the wide, shallow headlights. That curvy waistline, dropping between the front and rear pillars. The near-flat rear window contrasting with the sensuous flanks. It’s all very elegant, very understated, very silk purse from une oreille de cochon. True, the visual outcome is more Pininfarina than Peugeot but that doesn’t matter. People bought the Coupe in small numbers over a long production run, from 1968 right up to 1983. Later V6 examples were slightly spoiled by big, mutton-as-lamb bumpers painted in body colour, but our car here has the correct bright-metal adornment plus some quite fat alloy wheels as offered from the late Seventies. They wear fully- metric Michelin TRX tyres, of a devilishly hard-to-obtain 190/65 HR390 size. To keep the metric wheels is the mark of a true 504 Coupe enthusiast. 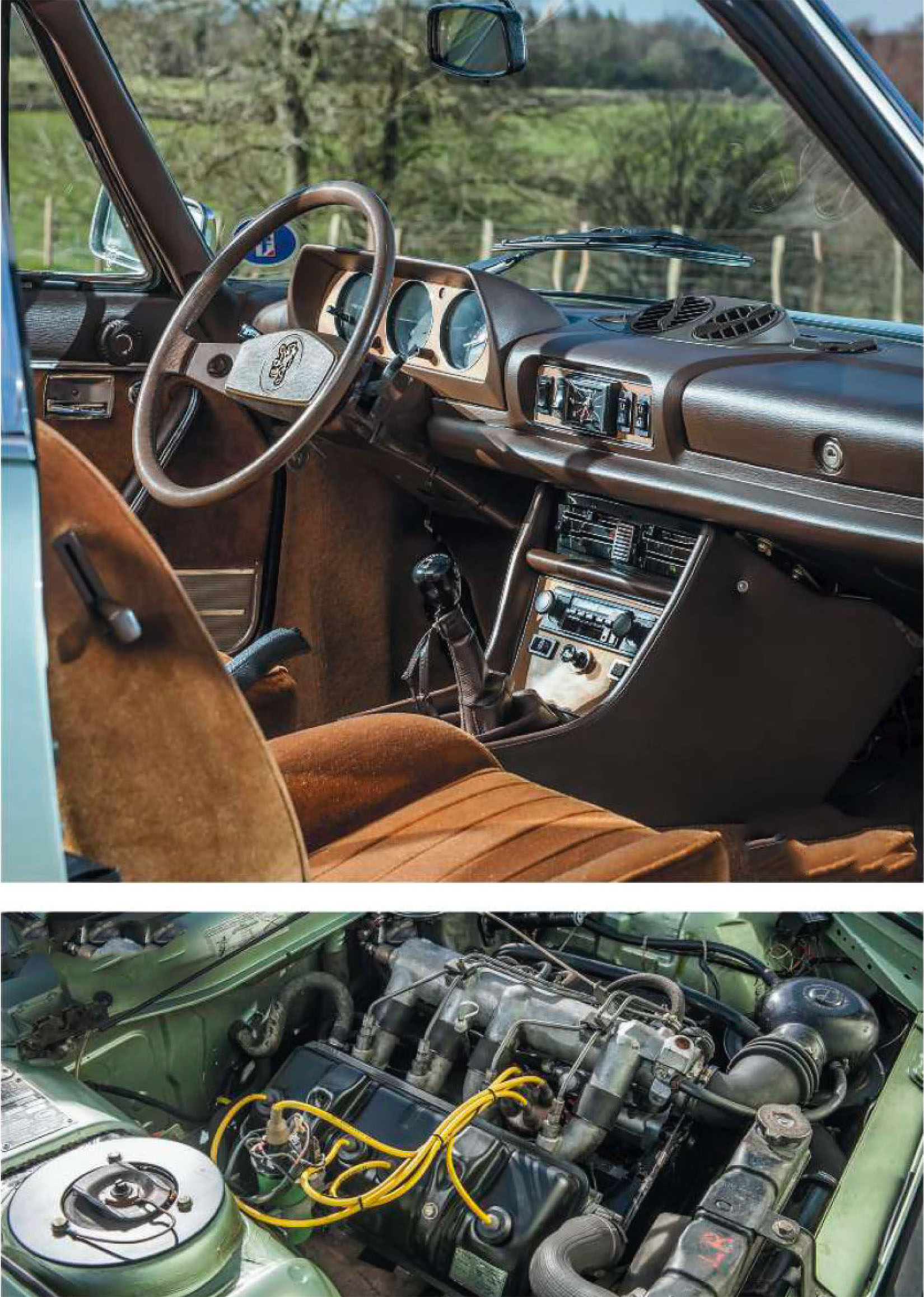 What the interior lacks in style it makes up for in shades of brown. Not the smoothest unit but gearchange makes driving it pleasant.

Inside this pale green car all is very brown, from chocolate through to autumnal leaf. Three round dials sit ahead of a brown steering wheel whose two spokes each contain a round hole intended to hint at a possible sporting spirit. This wheel seems set high, but that’s because I’m engulfed into the depths of an embracing seat trimmed in soft velour. Italian the Peugeot may seem from the outside, but its cabin is purely French. Apart, that is, from the pleated headlining, a feature found also in the Fiat and the Italian-styled Jensen. There’s usable rear seat space in here too, despite losing eight inches of wheelbase to the saloon.

To drive, the Peugeot 504 Coupe 2.0 really isn’t a sports car. It’s more about being seen to cross a continent in relaxed, rakish style and being admired once at journey’s end. There’s an aristocratic bearing about this Peugeot, born of gentler, less go-getting times when people accepted and enjoyed style for what it is instead of obsessing over brands and peer- group pressure. That’s not say this 504 isn’t an enjoyable steer: it is.

The engine has the relaxed torquiness expected from its low specific output, delivered willingly if not particularly smoothly or sonorously.

It’s more propulsion device than aural feast, but the precise gearchange helps make the most of the modest but affable performance. Where this car does score, though, is in its ability to cope with bumps and dips while steering an accurate course. Peugeot has long had a reputation for an outstanding blend of ride and handling, albeit one that took a bit of a beating in the early noughties and is only now resurfacing, and this 504 Coupe is true to type as befits its role as a handsome cruiser.

Remember, too, that the 504 family won the world’s toughest rally, the East African Safari, on two occasions and did likewise on other African events: this is a strong, solid, well-built car. Those who regard Peugeots as flimsy have short memories.

You’ll be lucky to find a 504 Coupe or Cabriolet for sale in the UK - they were never made in right-hand drive nor sold here. They are also more Italian than French in their rust resistance. However, it’s worth tracking one down in mainland Europe, as happened with this example, and bringing it back. There has probably never been a more understatedly glamorous Peugeot.

Geoff Goodson ‘I bought it from a dealer in Germany via Wolfgang Leidtke, a classic car broker in Sussex. The dealer got it from Ruyl Classics in the Netherlands. ‘It’s done only 34,000 miles and is completely original, with no welding ever. Peugeot dealer Yeomans of Worthing looks after it, and the people there love it. 'Nottingham Diesel Services fixed the injector pump: one plunger was about to seize and the camshaft was scored, but fortunately it was caught just in time.’

it's a gorgeous-looking car.