No one wants to admit to owning this unique car, let alone commissioning or building it. It should offer the best of both worlds - tried-and-tested, dependable Mercedes underpinnings with lashings of Italian flair. That makes for a fine concoction on paper.

But not only is this car missing from Pininfarina’s history books, the name of the Dutch businessman who lavished 400,000 guilders - the equivalent to 83 Volkswagen Beetles - on this creation is a closely guarded secret; and his relatives still don’t want the family name associated with this car. 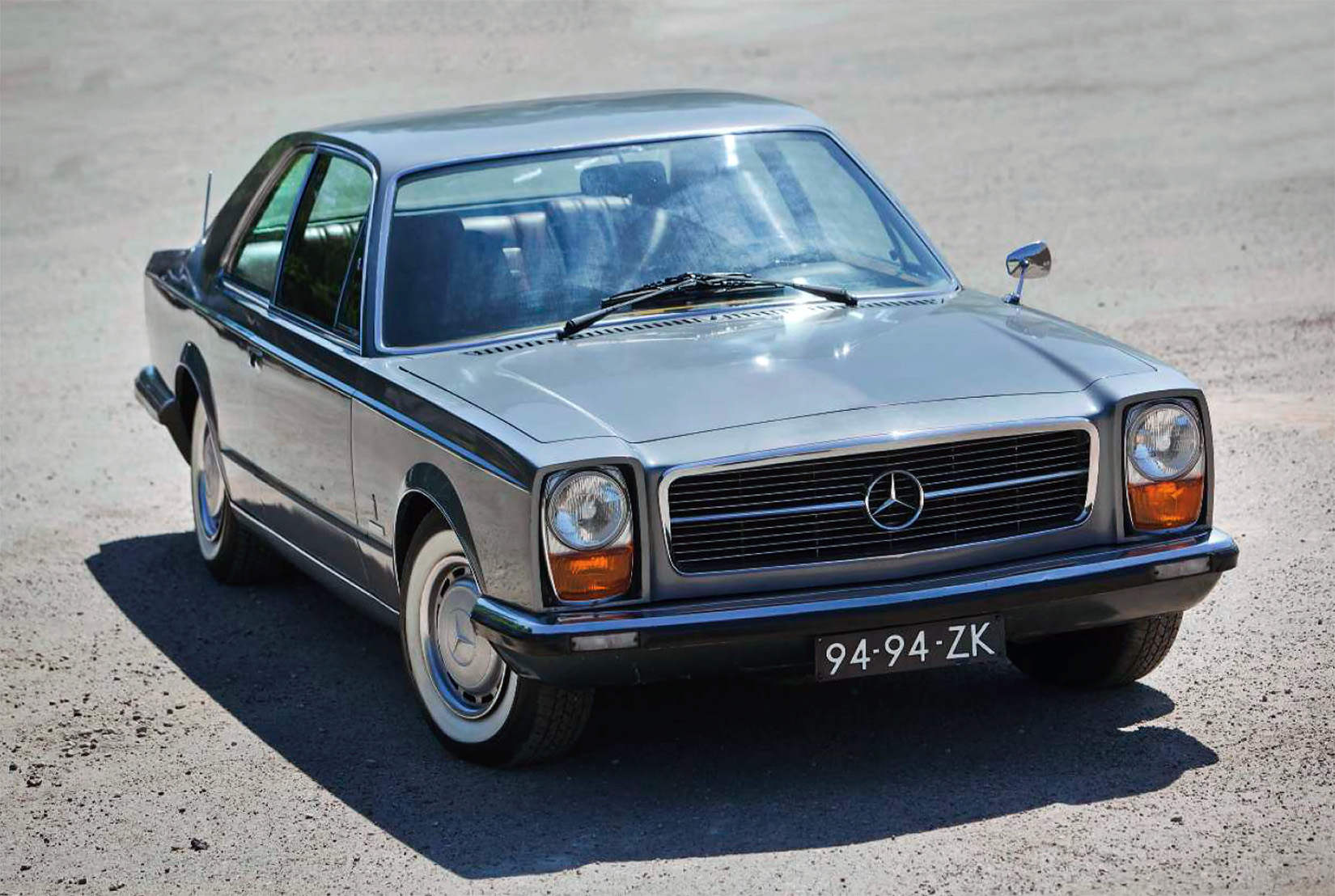 Press reports at the time were minimal, too - Auto Motor & Sport could only bring itself to mention it in passing as a one-off built for a Dutch customer. And that was it for decades, though rumours abounded as to who commissioned it. Beer magnate and motoring enthusiast Freddy Heineken has been mentioned, but it’s not him. The obviously well-heeled chap in question did, however, head a multinational company, and his enthusiasm for cars led him to ask Mercedes to build him a special-bodied 300 SEL 6.3 - a car that in factory spec packed a monstrous 6.3-litre V8 into subtle saloon packaging. This request was turned down, so our man bought one himself and took it to Turin for Sergio to work his magic.

In 1969 work began. The wheelbase and track were unchanged, as was the overall length - five metres. The height of the doors was unchanged, but the roof was all-new. The windscreen sits further back in the car’s profile, and the rear window is further forward. With the A and C pillars at a considerably sharper angle, and the roof top three inches lower, this coupe has a much smaller glasshouse. The longer bonnet and boot were handmade in steel, as were the wings, bumpers and massive doors. Then there was Pininfarina’s traditional slot that runs along both sides of the car from wheelarch to wheelarch; a feature that would also appear much later on cars such as the Ferrari 400 and Alfa Romeo GTV, among others. That distinctive front grille, while reminiscent of Mercedes’ Pagoda, is unique to the car. The headlights, in their starkly squared-off housings, originally came with black bezels, but the current owner chose to replace these. 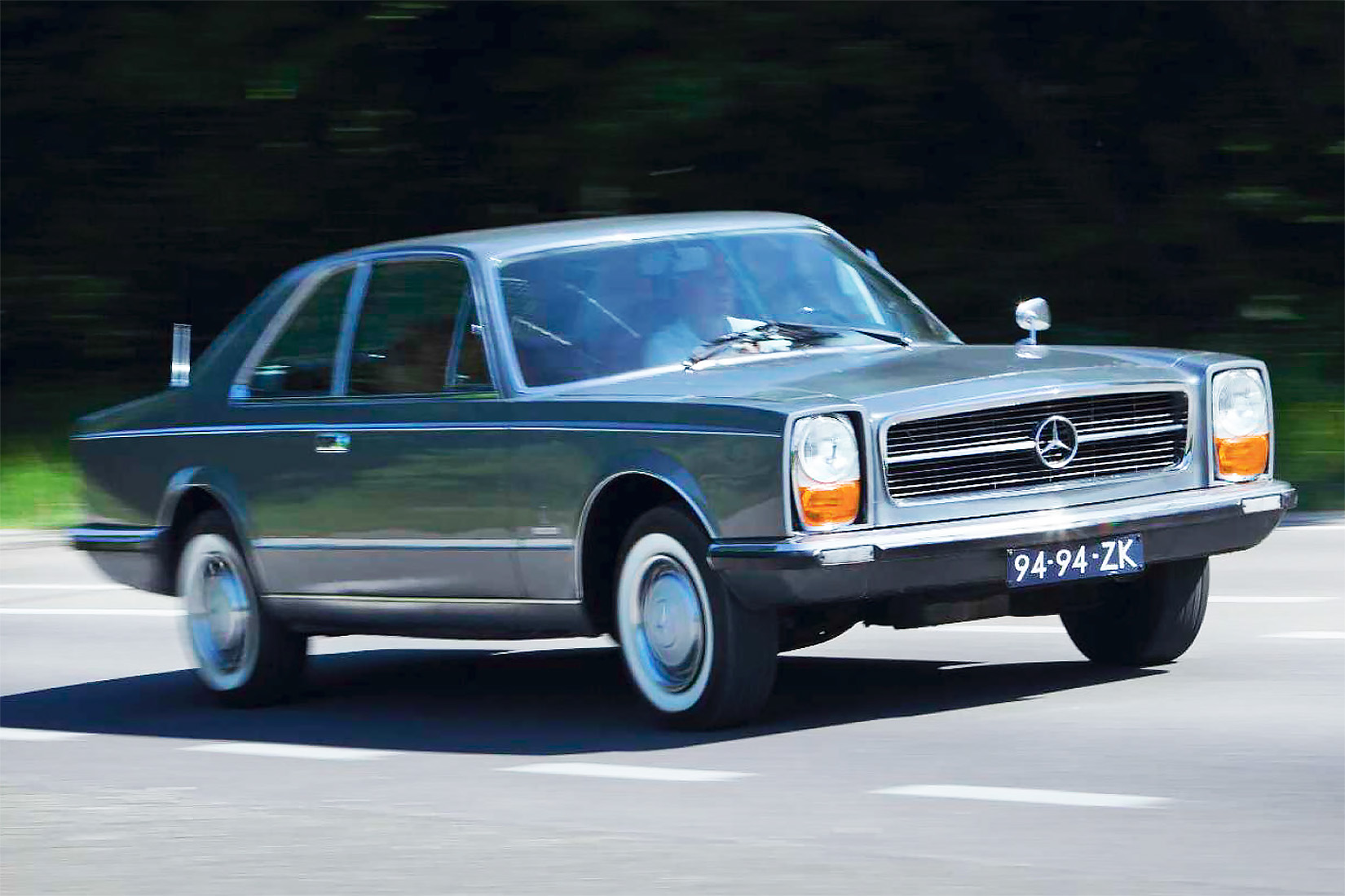 To put the full weight of your wallet behind such changes would indicate a deep love of cars, but relatives of the now-deceased benefactor claim differently. ‘He liked unusual cars. No sports cars or anything like that - it had to be sound and solid. Above all, he wanted to be able to trust the mechanicals.’

But enthusiast or not, once the secret big coupe was finished and the invoice paid, he needed to use it. A chauffeur clocked up most of the miles, but mainly without the spouse as a passenger, as she soon turned out to be not much of a fan. She was even said to complain about it, and when asked about her husband’s extraordinary car her usual answer was that she preferred a Volkswagen Beetle. The family claims Pininfarina made an error during the build that meant exhaust fumes drifted into the interior. His daughter says, ‘They travelled a lot together, but never in that car as she always became sick while being driven in it.’ The two-way ventilation system, developed by Behr, had required strenuous effort to install, according to Driver-Car. Whatever the reason, it meant the car was only loved by its benefactor - his five children turned their noses up at it. 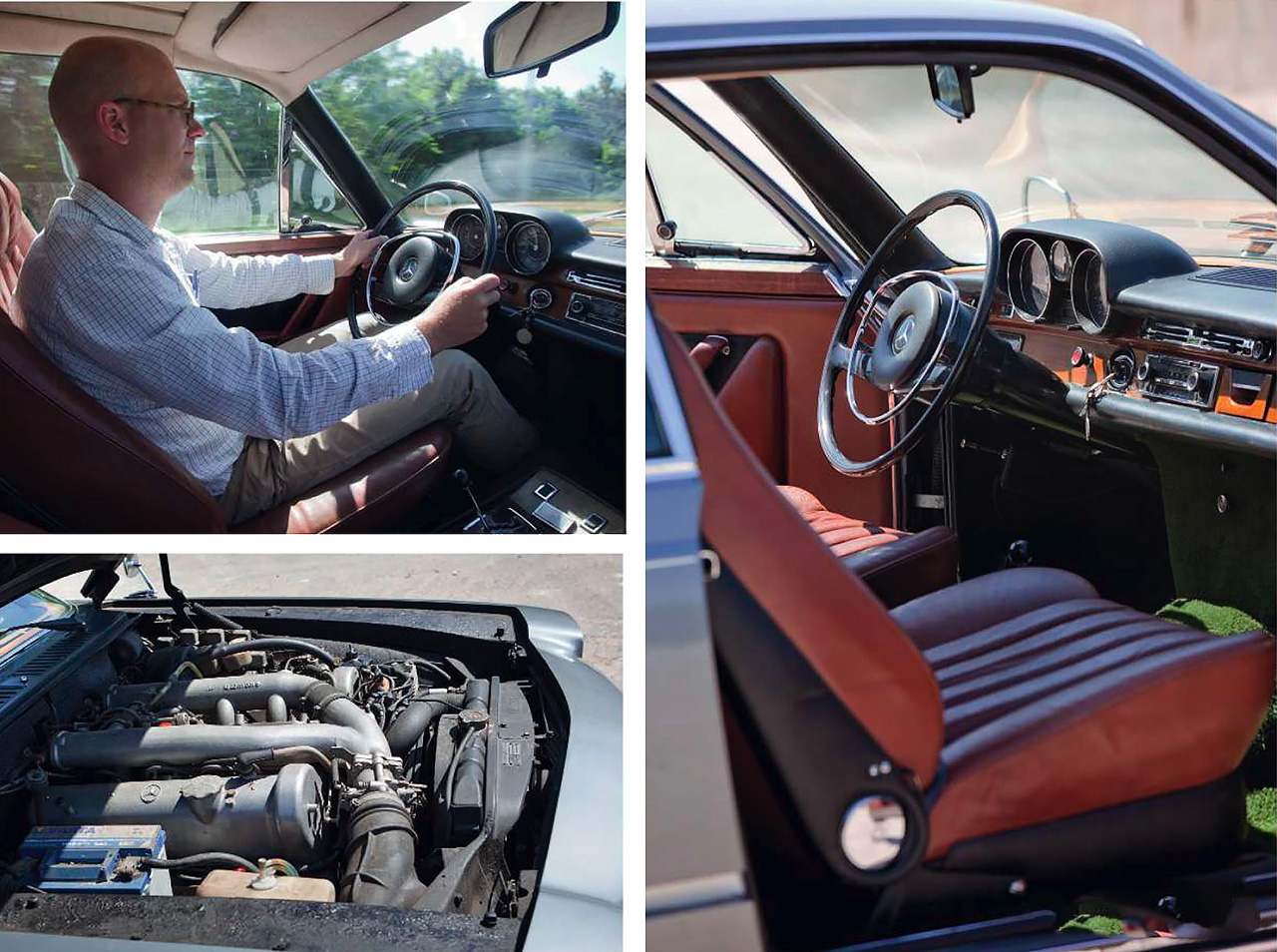 With 65,000km on the odometer the car was sold in the late Seventies and not replaced. From then on our man used a Rolls-Royce that had been in the family for a while.

That brings us to the Pininfarina-designed Rolls-Royce Camargue, with which this car seems to share some stylistic cues, even if the Camargue was unveiled many years later - in early 1975. Rolls-Royce’s alliance with Pininfarina came about because of then-chairman (now Sir) David Plastow’s persistence. Plastow was charmed by the Bentley T1 coupe Pininfarina did for Lord Hanson back in the late Sixties and wanted a Rolls-Royce in a similar style. Rolls-Royce needed a lengthy development period for the Camargue, so the project started in 1969: the year when our Dutchman parked his 300 SEL in Pininfarina’s workshop. It seems logical Plastow saw the one-off Mercedes being built but, as explained on page 100, he’s adamant he didn’t.

While the looks may divide opinion, the quality of the materials beneath are second-to-none. Today, we’re used to AMG-adorned Mercedes having ever-increasing amounts of horsepower squeezed into their saloon bodies. And while most modern-day rivals have high-horsepower autobahnstormers it was Mercedes-Benz that invented the plain-looking supersaloon with the 300 SEL 6.3, based on the 250. That model’s sober, Paul Bracq-penned lines, angular cabin and upright headlights didn’t make for an exciting machine. But when, one day, a Mercedes engineer decided to fit the largest engine in the company armoury, everything changed.

The 6.3-litre V8 was normally found in the 2.5-tonne 600 limousine adored by royals and dictators. It’s no surprise that this powerhouse of an engine gave spectacular performance in a body that was 700kg lighter. It’s said Mercedes test driver Rudolf Uhlenhaut got rather a shock behind the wheel of the prototype, having to stop and jump out at the first set of traffic lights to see what on earth had been fitted under the bonnet. But the biggest surprise of all was that Mercedes-Benz - at the time known for being extremely conservative - took the car into production. One of the world’s more remarkable cars was born.

That made it the ultimate car for the man who had everything but preferred to keep a low profile. And there were plenty of these to be found - 6526 to be precise.

The driving experience is a wonder, too - landscapes pass by at considerable pace but all in a muted near-silence that would suit the funeral of a much-loved head of state. And if more speed is required, only millimetres of extra accelerator pedal force are enough to fire you into the horizon in the manner of a carnival attraction. All this while the passengers can continue to varnish their nails or peel apples in quiet serenity.

However, with just over 71,000km on the clock, the Pininfarina SEL appears to have lost its freshness. Call it tatty or call it patina, it’s probably both. What this means is that the paint has faded, the windscreen is scratched and blisters bubble under the doors and bumpers. Whoever opens the huge bonnet to reveal the enormous eight-cylinder engine will stumble upon corrosion on cylinder heads, servos and pipes.

However, the wear and tear actually adds charm to the interior. Cognac and almond-coloured leather is everywhere, as is high- quality veneered wood on the dashboard and A pillars. Most of it was unmodified from the donor car, but the emerald green carpets have to be a Pininfarina touch. The central locking uses a wickedly complicated vacuum system - it also needs some maintenance. That goes for most of this very special Benz that hasn’t been driven much in the past 33 years.

Despite the passage of time and the resultant decay, the engine appears to run just fine. And when it’s idled for a while, the air suspension pump starts its job, reminding me of a Rolls-Royce Silver Shadow. The driving characteristics are also similar. Where the power output of Crewe’s cars was usually stated to be ‘enough’, figures for the 300 SEL were announced without any mystification. The 6.3-litre offered a then-mighty 250bhp, but it’s the monstrous 369lb ft of torque that impresses most. Mated to a column-change, four-speed automatic gearbox, the Benz sprints from 0-60mph in less than seven seconds: a figure not many sports cars of 1969 could match. When I floor the V8, there’s a muted hum through the thick layers of sound insulation. And the air suspension keeps everything upright, even when an abrupt kickdown is applied.

To accommodate the extra power, modifications to the chassis included extra bracing struts and welding, plus bigger ventilated discs and heavier wishbones.

Obviously, this isn’t a car to be chucked into corners - it’s at its best on long motorway sorties, swallowing long stretches at high speed with the rev counter at a calm 3200rpm en route to the Kurfiirstendamm or Konigsallee, or further into Europe, to Park Lane or Boulevard Haussmann. Tales abound of 300 SELs cruising at 120mph for hours and hours.

This car should be capable of that, However, before that happens again a bit of TLC is in order. In its current state I wouldn’t be surprised to find the water boiling before passing the first border control. The electric windows would surely refuse to open at the toll gate, and I’d expect to smell fumes from under the dashboard, just when I was entering the Paris Peripherique That’s not a great state of affairs for a car of such grandeur, and it’s a great shame. This grand old lady was painstakingly built by the best men of the day, but it never got the attention it deserved. It deserves better.

And, when finished, the first 120 miles would definitely lead me to Italy’s Villa d’Este for the concours. After all, this car’s not a secret any more now.

David Plastow, 80, worked for Rolls-Royce from 1958 and was the company's chairman at the time the Camargue was launched. That car was his idea, and he’s sure he never heard or saw anything about a similar- looking Mercedes project in the works at the same time.

He has fond memories of going to Turin to meet Sergio Pininfarina, though. ‘He was a great, great man. We became engaged over the car in 1968 or 1969 and I made a couple of visits. Sergio became a friend and that helped me to endorse the relationship in regard to the Camargue project. He was very much involved in it. I didn’t hear about any other similar project.'

When shown a picture of the Mercedes, David says, 'It’s only roughly the same. It’s full of straight lines and I do not see a close relationship apart from the scale. It’s a squared-off solution and I don’t see it as a copycat sort of thing. The timing is intriguing, though.

‘What a pity we cannot ask Sergio about it any more.’

This isn’t a car to be chucked into corners - it’s at its best on long motorway sorties, swallowing long stretches at high speed’

Like the original owner of this car, the second and current owner wishes to remain anonymous. Having bought and sold thousands of cars for a living between 1961 and 2000 he snapped up every rare beast he could lay his hands on. Tve always owned unusual cars. Lotuses, Lombardis,

‘When I heard of this Mercedes coming up for sale 33 years ago I had to be quick, as somebody else wanted it too. I've not driven it much, maybe a few thousand kilometres. I like its understated looks. I remember when I’d just bought it and drove it over to my girlfriend. She said, “So much money for such an ugly car!”

I think people without a lot of money dream of flashy American cars in three colours. Someone with real money does not need to be seen.

Twice I was offered a serious sum for it, one time by a collector of Pininfarina cars. But I turned both of them down. I am 81 now and can’t drive it any more. If someone makes me a good offer I might just do it this time.’

I am amazed! Thank you for the article!