Luxury, with a sporting twist. In a quiet corner of the Peak District, Simon Charlesworth tries to pick a winner from three landmark executive saloons by BMW, Mercedes-Benz and Jaguar. Photography Gerard Hughes.

When the junior executive car’s second chapter began, the instigators behind the story – Rover and Triumph – were already disappearing into the BLMC abyss. The keen-eyed Germans, though, had realised the potential of this new sector and were quick to respond: Mercedes-Benz with the W114/5 and – continuing its astounding recovery from seemingly certain financial ruin in the late ’50s – BMW with its E3. 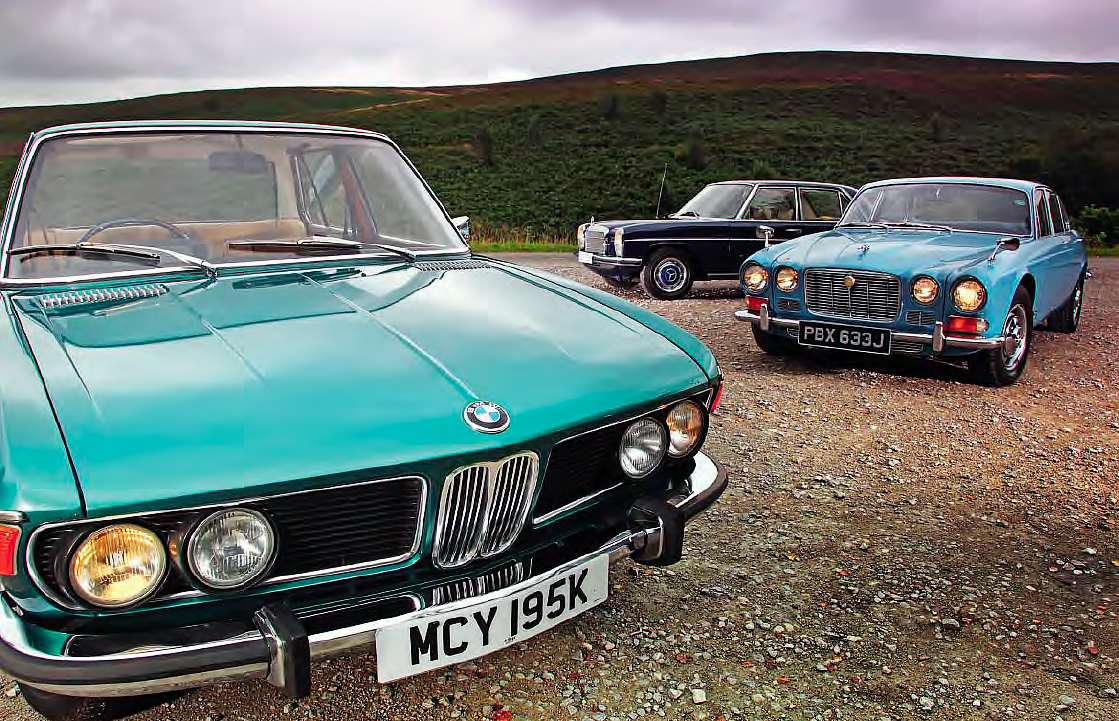 The new generation of British junior executive saloons, meanwhile, was represented by just one car: the Jaguar XJ6. Rover and Triumph would revise their 1963 progeny, but both the P6 Series 2 and the 2.5PI Mk2 were merely new brews in old bottles.

If 1967 witnessed bountiful crops of hippies, frolicking naked with butterflies while discussing the cosmos with a semolina pilchard, then 1968 was the summer of love’s skull-cracking hangover.

The newspapers were peppered with gloom: a legion of protests heaving with kaftanclad baby-boomers; the Wilson goverment’s balance of payments problems; and The Beatles, with rumoured internal tensions, would only follow up their seismic LP Sergeant Pepper’s Lonely Hearts Club Band in November.

Who would have been interested enough in these cars to visit Earls Court for the 53rd International Motor Exhibition, pay 2s 6d for a catalogue and spend the day prowling beneath the manufacturers’ signs and thick cigarette smoke? In the midst of the schoolboy brochure collectors’ scrum, dollybirds and full-scale cutaways, you could admire the glittering machinery. 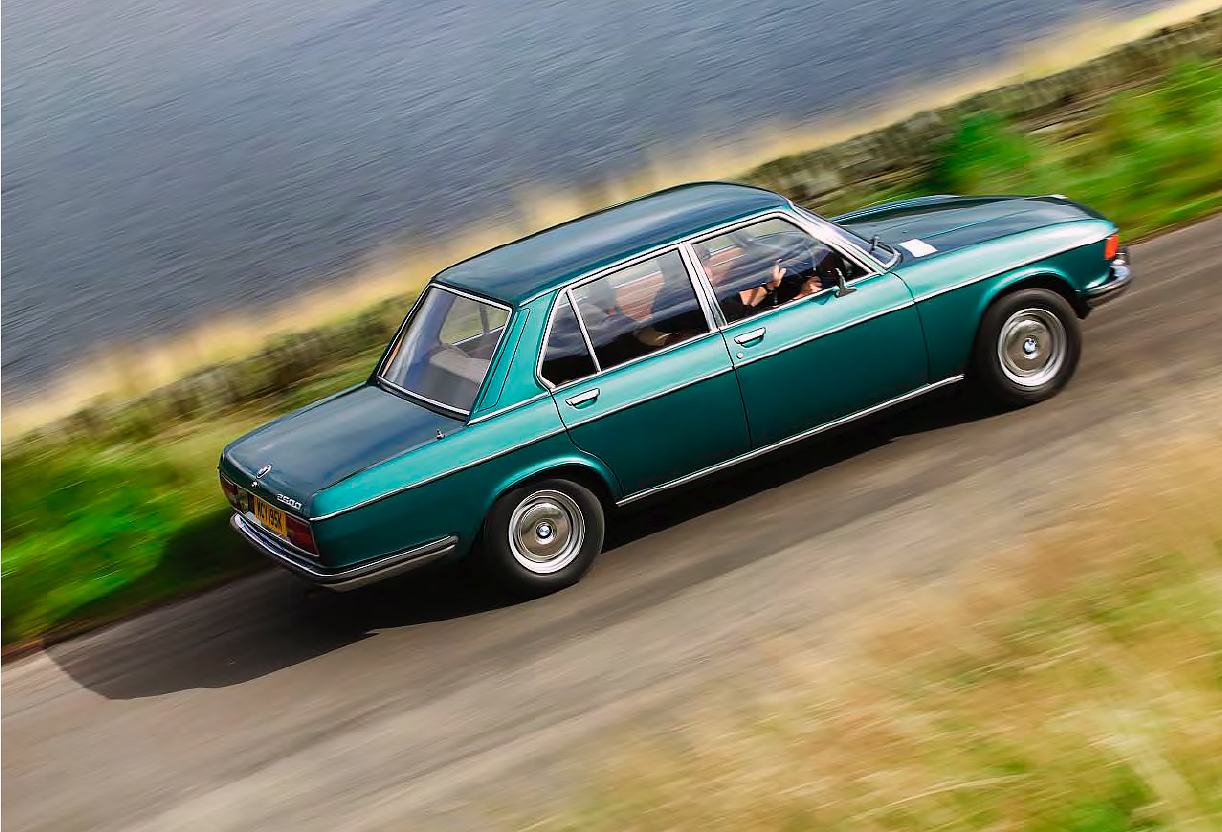 Clockwise: elegant E3 features the signature ‘Hofmeister kink’ on the C-pillar; twin kidneys, or nieren; clever hinged rear plate hides fuel-filler cap; Zenith carbs on this 2500; it grips and rides well, but isn’t as supple or as well damped as the Jaguar.

Well, Mr 1968 Executive was probably a thirty-something, go-getting family man and suburban émigré. He would desire quality garnished with competition kudos and, in keeping with the prevalent egalitarianism, his new motor car would show that he had turned his upwardly mobile back on his parents’ outdated ‘know your place’ credos. Doubtless he would conclude the day mulling over this tantalizing trio, all of which would suit his port-and-lemon, middle-class status with its G-Plan furniture, Old Spice and stereophonic Sony TC-530 reel-to-reel tape player accoutrements. Beneath the chic Paul Bracq-designed body of the Strich Acht (‘slash eight’ refers to the W114’s 1968 ID plate), Mercedes proved that even Stuttgart wasn’t immune to the period’s appetite for modernity with the Fintail’s replacement. Under its crisply tailored tin was a new beginning. Byebye low-pivot rear swing-axles and hello semi-trailing arms, plus all-round disc brakes and a choice of four- and six-cylinder petrol engines (with diesels arriving later). 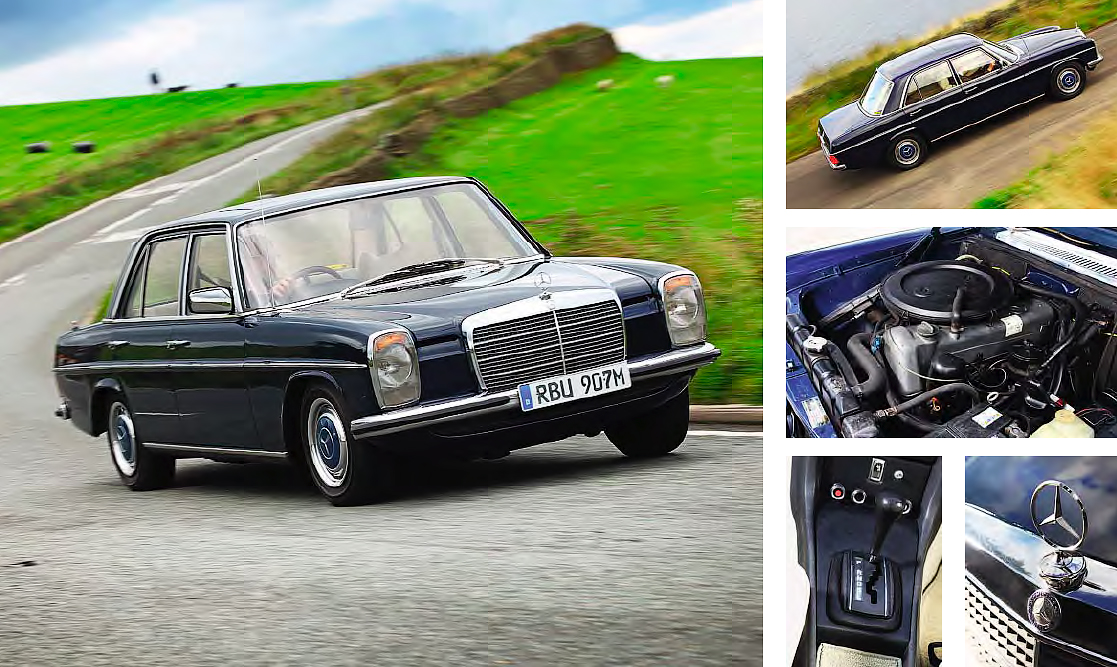 The 250 Neue Generation’s absence of rattling sootiness means that the owner of a W114 ‘six’ shouldn’t be mistaken for a jobbing Stuttgart taxi driver. Arguably, it is more difficult for him not to be regarded as a middle-management henchman on the Bond villain company-car scheme.

The superb interior of this 250 – powered by the larger 2778cc ‘six’, which superceded the original 2496cc in 1970 – is a bright and airy tonic after 2012’s fat-pillared behemoths. Being a 1974 W114, it comes with the post-’73 revisions, the most obvious from the driver’s seat being the headrests and large four-spoke wheel.

Enthusiastic drivers, however, will smart at the lack of a rev counter and clutch pedal. Moving from the Mercedes, your ears register a pleasing thunk behind you. Inside the BMW 2500 there is an even lower waistline, greenhouse visibility and a cloth-trimmed interior that is in remarkably original condition. Its VDO instrumentation is clearer and more comprehensive than the 250’s and its ergonomics are unashamedly driver-centric. The tachometer wears a 6400rpm redline and, glory of glories, there’s a four-speed manual gearbox – though it also came with a three-speed ZF automatic. 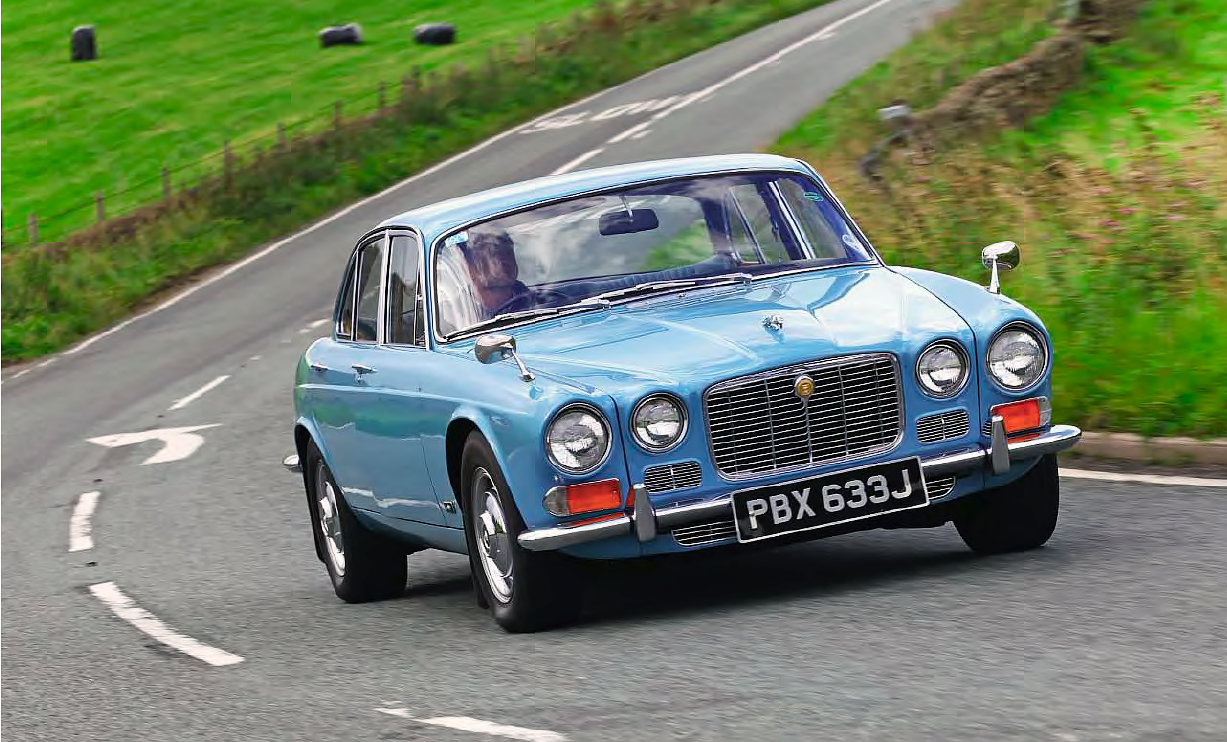 Clockwise: front end of XJ6 clearly harked back to its 420 predecessor, but its road manners were in a different league – few cars ever matched its ride, yet it corners better than the BMW, too; 2.8 version of XK twin-cam suits manual gearbox; big cat badge.

Sitting here, inhaling 1972, the differences in quality between Stuttgart and Munich are scarcely detectable – unlike the disparity in these two competing designs. This is the reason why a bullish BMW launched a feisty attack on long held Mercedes-Benz territory with the ambitious 2500 and 2800 – sportier interpretations of the straight-six powered, rear-drive, four-door luxury template. Designed under Wilhelm Hofmeister in the tradition of the 1961 Neue Klasse, the E3 is what everyone now imagines an upmarket BMW to be: stylish without whimsy, and involving to drive. It was powered by Alex von Falkenhausen’s superb M30 ‘six’.

Stylistically, the German two are elegant, unfussy and confidently modernist – the XJ not quite so. The Jaguar’s front bears clear 420 cues, with quad headlamps bookending an updated grille. Its feline rear, with flexed muscular haunches, is far more athletic than the à la mode Teutons with their clean, crisp, uncompromised ‘edge line’ profiles. Continuing the British tendency to lag slightly behind the aesthetic times, the XJ6’s mid-’60s appearance refuses to be pigeonholed, save to say that it is unmistakably Jaguar – and undeniably beautiful.

The ultimate William Lyons Jaguar has a driving position that is more reclined, a higher shoulder line, a deeper, slightly narrower footwell and interior fittings that are bordering on the nostalgic. A parade of Smiths dials affixed to a sober wooden dashboard, a two-spoke wheel with horn-ring, and opening quarter-lights – in 1968... Such is its quaint cosiness compared to the continental competition that the Jaguar feels like an elderly relative’s parlour.

The XJ, however, is the exception to the rule that precious good comes from corporate rationalisation. Designed to replace Jaguar’s unruly range of saloons, the XJ was endowed with engines that – in Series 1 form – would include 2.8 and 4.2 ‘sixes’ and eventually a range-topping 5343cc V12 in 1972. Its underpinnings used an anti-dive evolution of the Jaguar MkX/420G double wishbone suspension and Bill Heynes’ splendid four-coil independent rear set-up.

Refinement was the XJ’s mantra, as was a degree of excellence that would keep Jaguar at the top of the class until the arrival of its replacement, the XJ40, slated for 1975 (it was 11 years late!). For the XJ to receive sufficient funding to be put into production, however, Lyons had to sacrifice his troubled firm’s independence by merging with BMC and Pressed Steel in 1966.

Musing, pontificating and snapping done, we head back up to the speed-camera neutered section of the A537, the Cat & Fiddle. First up is the Mercedes. Its driving position is excellent, it cruises effortlessly with that 2.8-litre ‘six’ and is considerably refined. The all-round discs are impressive: powerful with plenty of feel and nicely weighted. The W114 even corners well, and responds to mid-corner adjustment without complaint as David Evans notes when an errant HGV attempts to canoodle with the 250’s offside front wing. In fact, Autocar observed of a similar model in 1973: ‘The car exhibits little roll and the adhesion is of a high standard indeed.’

Yet the Mercedes’ stiff throttle lacks progression and the automatic ’box is about as responsive as a snoozing peer post-luncheon. Kickdown is sluggish and begrudging, smothering the 130bhp the straight-six can muster in exchange for greater levels of engine noise. While its ride is comfortable, this car’s rear dampers have seen better days, plus its over-assisted and low-geared recirculating-ball steering is a touch vague.

In many ways, like an orthopedic sandal, the 250 makes good sturdy sense but it also has all the sassiness and excitement of said footwear. Its lexicon includes core Mercedes virtues – solidity, longevity and integrity – yet its vocabulary lacks a capability to express entertaining emotion.

The other two, though, are fish sourced from a different kettle – one powered by a flexible, rev-happy ‘six’. Indeed, their closeness is such that Evans remarks: “I’m glad you’re writing this and not me. I’d struggle to pick between them.”

If BMW’s mission was to build a machine with greater verve than established Mercedes-Benz practice then it clearly succeeded, for this sweet 2500 is an enriching experience.

While the 1971 Jaguar’s cabin has a soothing ‘there-there’ ambience, which is as relaxing and cosseting as its ride/handling compromise, the BMW’s is a modern, informal yet comfy place of work that encourages its driver to press on. It sparkles, is finely honed, balanced, poised and responds willingly to the throttle’s attitude. Body control is well governed, the brakes are good, and then there’s the steering. If, like me, your foremost automotive fetish is decent steering, the 2500’s power-assisted ZF-Gemmer worm and roller aces this criterion. The slim three spoke wheel slithers and caresses as it passes through your hands. It’s positive, well-geared, nicely balanced and full of feedback.

Rapid though the BMW is – its 9.3 secs sprint to 60mph is almost as quick as a 4.2 XJ6 – it can’t compete with the Jaguar’s dynamic excellence.

The XJ6 has higher levels of grip, with an unsurpassed ride for something sans hydropneumatics, and it seems blissfully unwilling to roll on this snaking road. Indeed, after returning to the 2500 from the Jaguar and going through a tightening left-hander, a swift wide-eyed lesson in Bavarian understeer is more than enough to illustrate its Coventry rival’s exemplary composure.

As we climb up from Buxton, not once does the grip from those arch-filling 205/70x15 tyres become threatened – even when the well weighted manual-overdrive gearbox works the 2.8-litre into a sweat, filling the cabin with one of the most distinctive vocals in classic dom. Keep the revs above 3000rpm and the baby XK comes on cam, reaching for the red region at 6000rpm.

Aside from performance, where the BMW really counters is with its responsiveness. The only chink in the XJ6’s armour is its over-assisted Adwest rack-and-pinion steering; like the Mercedes it is undergeared, but it is lighter and almost completely incommunicado when compared to the 250, let alone the 2500. There just isn’t any pretence of weighting or feel at the wheel, instead the driver has to rely on judgement accrued over yards, furlongs and miles.

So which would Mr 1968 Executive have bought? The Jaguar: it is the best, most beautiful car here, and it was the most affordable. As Motor noted in its 2500 automatic test: ‘Unfortunately, the price of such sporting affluence is high... The £2475 4.2 XJ6, bogey of all lush Continental imports and in our view still bettered by none on overall merit, accentuates the burden of import duty and, perhaps, the fact that Jaguar can still teach the world something about costing.’

The XJ6 would also tap into those glorious Le Mans memories from his youth, as well as the E-type’s celebrity-endorsed glamour from the decade’s debut. Doubtless it would even enable him to support Wilson’s patriotic economic policy, the ‘I’m backing Britain’ campaign, too.

In 2012, though, the classic choice is not so clear. The XJ6 is still a superb machine that gobbles up miles with the appetite of Monty Python’s Mr Creosote, yet there’s always something about the BMW. Its capabilities are not all that far behind the Jaguar in purely objective terms, but it is perhaps more willing to play due to its modest 175x14 footwear, greater degree of body roll and better power-to-weight ratio.

Palm that precise short-throw Getrag four-speed ’box, experience the free-revving M30’s husky howl, feed the steering just so and delight in a nimble, sporting chassis that is eager to show you a good time on your favourite road.

In due course it all depends on your priorities: sometimes the hushed calm of refinement is everything, and sometimes it isn’t.

Thanks to Steve Elnor, who is selling his Jaguar: 07762 192874; 4Star Classics for the BMW: 4starclassics.com; Classic Cars Manchester for the Mercedes: classiccarsmanchester.co.uk; Jaguar Enthusiasts’ Club: jec.org.uk; Jaguar Drivers’ Club: jaguardriver.co.uk