Tangerine dream Mercedes-Benz 450SL R107 - 1971-1989. The striking colour of this 450SL may be a matter of taste, but Lizzie Pope nonetheless fell under its spell, and was soon checking out R107 prices and likely running costs. Judging by the admiring glances enjoyed by this 450SL in the time we spent with it, this is a very desirable car. There are surely few who are not seduced by the idea of a modern classic Mercedes- Benz convertible, an SL, preferably with a V8 engine.

That is the inevitable conclusion as the sun beats down, sparkling off the glistening chromework, the lazy eight burbling up front as a gentle breeze washes through the cabin, light turns being all that are required to steer this striking roadster along our route.

For many people that sounds like a dream, but there is one word that strikes fear into the heart of many: classic. Beautiful, old cars are flights of fancy, right? Hideously expensive to buy and run? Which is why this, the Mercedes- Benz R107 SL, built from 1971 until 1989, could help make your dreams real.

Usable examples can start at £5,000, - says Carl Wilford, proprietor of independent Mercedes dealer Autobahn, and a specialist in R107s. “At that price it should start every day, and be as reliable as a £5,000 Fiesta, but more fun to drive,” he explains. “Mediocre examples are generally below £15,000,” Wilford continues. “The minefield is the £16,000 to £19,000 price bracket, where many have dubious histories, don’t drive with the all important crispness, and have been smartened up, hiding corrosion, and so are, in fact, sub-£15,000 cars.” 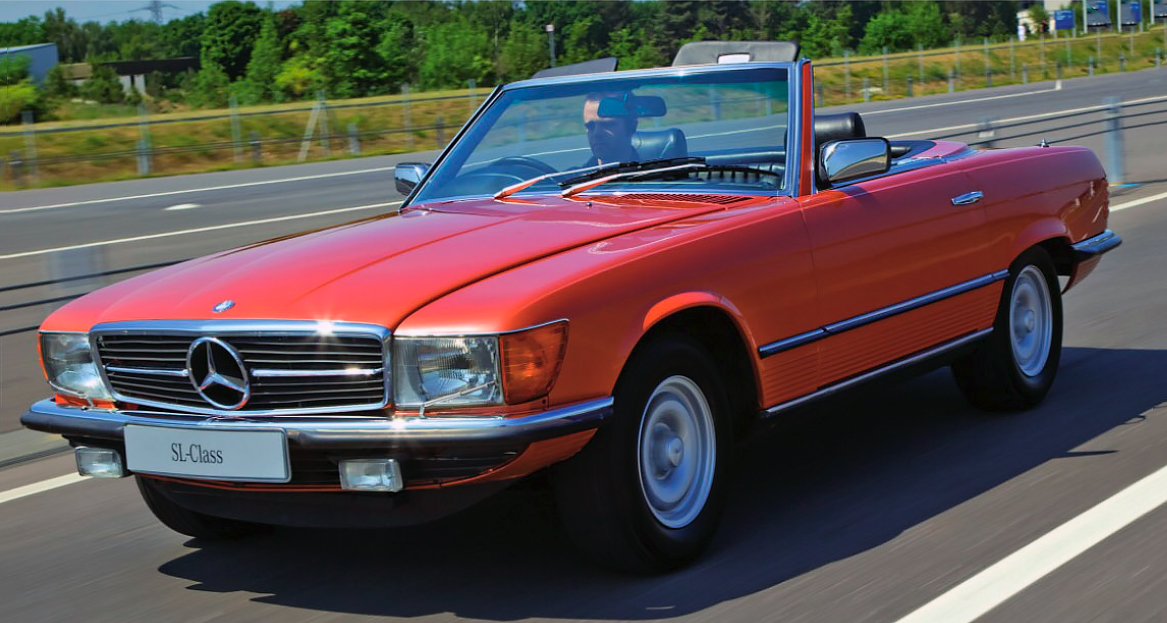 At the other end of the scale, what’s the top price? Wilford says values are rising, and that excellent R107s can sell for over £40,000. “The best cars are always stunningly crisp and flawless 300SLs with under 20,000 miles and a verifiable history in the most popular colours, which are dark metallics and increasingly red or white.”

But judging by the admiring glances enjoyed by this 450SL in the time we spent with it, this is a very desirable car. Granted, its unusual but very becoming colour was a factor, but it was more than that, with guests to the Brooklands Hotel in Surrey where we took the photographs happy to be sucked into the SL dream. So what that it isn't the model beloved of connoisseurs.

That means you can get more RIOT metal for your money. And not having any prejudices might help you make a more shrewd purchase.

Buy on condition, not mileage. This is the key, according to Sam Bailey of The SL Shop. “If I had the choice of a line of identical condition 107s, each with a different engine from the range, the 450 would be the last I’d pick,” he says. “If the 450 was the best condition of the cars in that line-up, I would not hesitate to hand over my hard earned and drive it away with a smile." 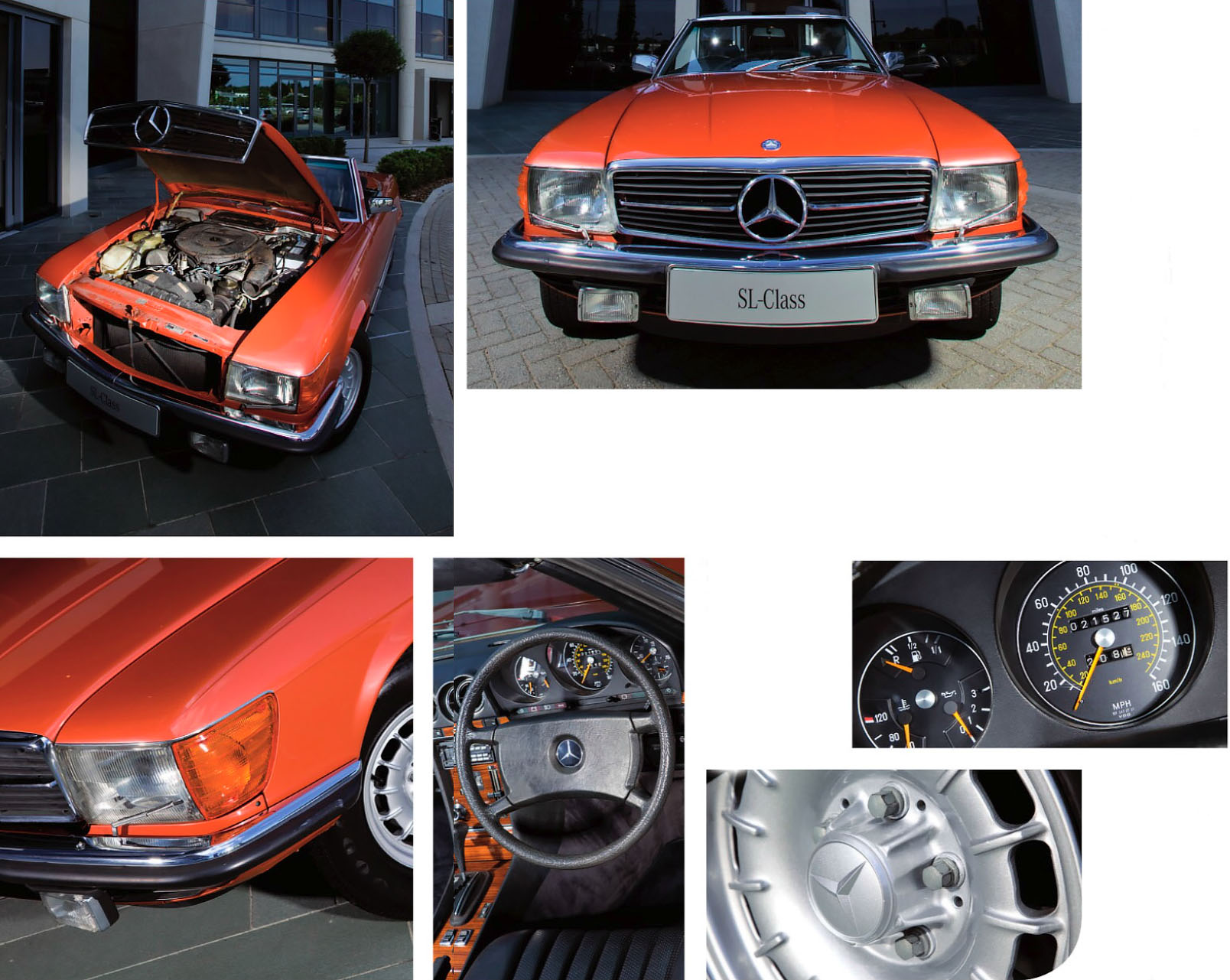 During our shoot this SL’s colour was a talking point - yes, it is an original shade, called Inca Red, and as far as we can ascertain was available only on the R107 SL and the W100 600 from 1979 until 1981. Ill that time, 658 Inca Red Mercedes were produced, and although we do not know how many of these were SLs, it is hardly commonplace. When it comes to value, rarity can push the price up, or its obscurity can push it down. SL owners traditionally seek more sober shades, so perhaps this daring hue hurts its value, but as a prospective buyer this might help you get more for your money.

From behind the wheel it did not feel like any compromises had been made. It is a very glamorous, feel-good car, and you can’t help but smile as you waft along. With just 21,500 miles on the clock, this 214bhp 1979 450SL still felt tight. The large, slender steering wheel, attached to an assisted recirculating-ball system, asks only for small, slight movements, making it an easy, relaxing drive, quick to respond, and with no slack around the centre. And there was only a touch of hesitation after depressing the throttle before the 4.5-litre engine wound up and got moving, a lovely, laid back V8 woo fie the sophisticated accompaniment to our progress. Approaching a corner, the brakes were strong, and although through direction changes there was a refined wallow this was merely a reminder that this is a car for making swift but serene progress, not for chucking at corners. 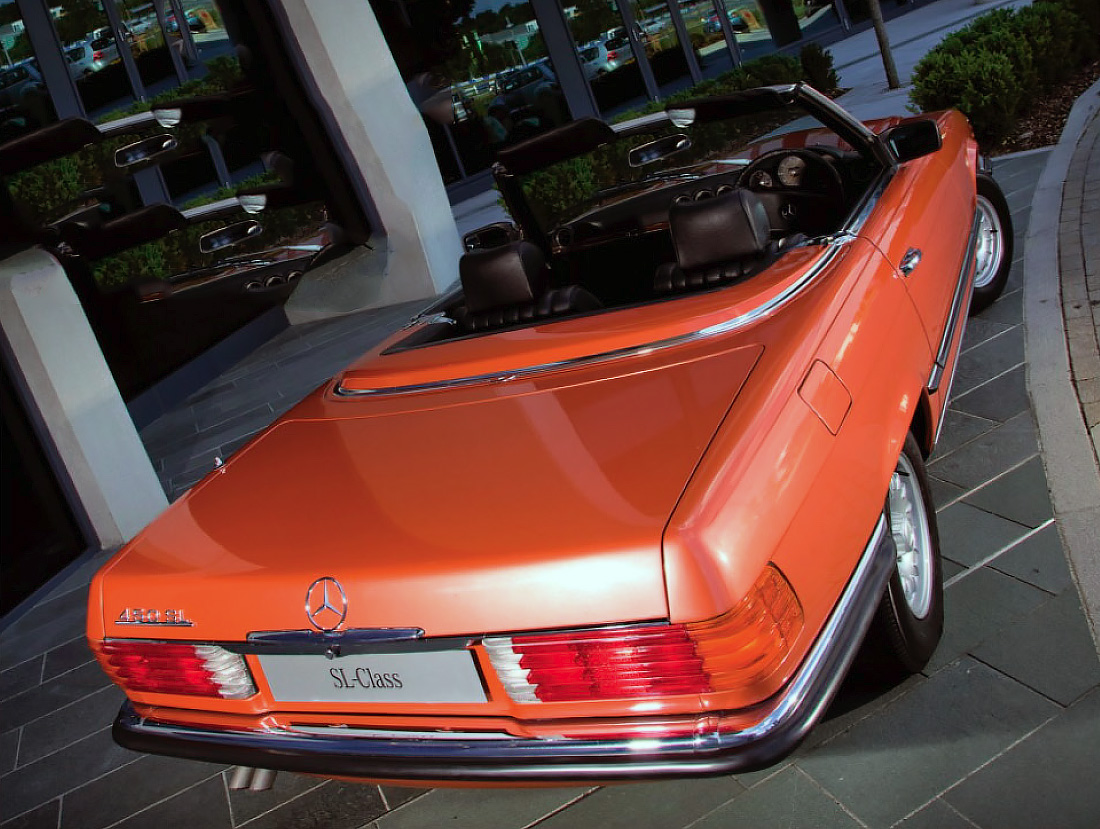 However, to make sure it doesn’t turn into a nightmare, go in with your eyes open, perform a thorough pre-purchase check of the vehicle and its paperwork and, if you want a second opinion, ask a 107 SL specialist to inspect any prospective car - it could be money well spent. Unsurprisingly, a prime area of concern is rust, after all, the youngest R107 is a quarter of a century old, the youngest 450SL a decade more than that. Sam Bailey says to check for rust round the rear wheelarches, above and around the headlamps, on the lower door edges, the sills, the inner front and rear wheelarches, especially the lower front edge of the latter, and the front jacking points. “Panel fit should be 100 per cent consistent,” he adds.

Other common problems include worn suspension components, the anti-roll bar links in particular, but Bailey says these cost under £100 to fix, the symptom being a rattle from the rear suspension. He also warns of water ingress, the heater and cruise control not working, and advises checking the condition of the interior. A further test is the tyres. “Elderly rubber with plenty of tread should still be changed,” he insists. And if there is water in the front footwells, a misfire, the engine belches out blue smoke or has a bottom-end rattle, Bailey's advice is to walk away. 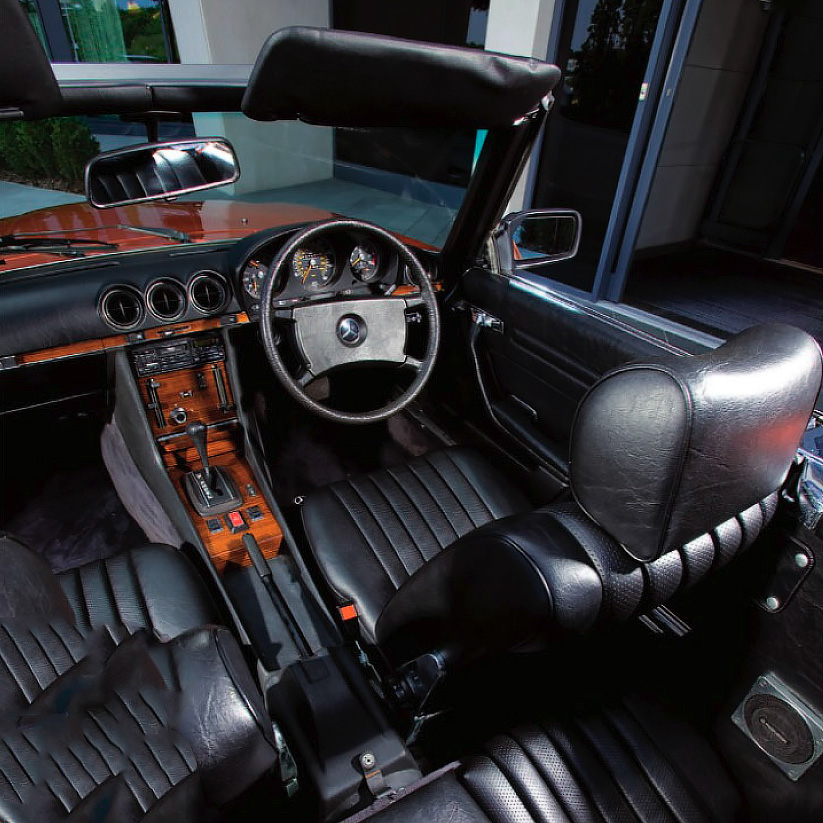 Yet he reckons there are some faults you can live with or fix later, malfunctioning headlamp wash/wipe and heated seats, and a small amount of water ingress included. Also check that the chassis number on the front slam panel matches that on the V5, and examine the service history.

“These cars will withstand years of neglect before they start to present bigger bills,” he tells as - and Wilford also underlines the importance of a car's history.

You should thoroughly test drive any car before buying, and Bailey has a few' words on how 450SLs should feel. An early Y8 feels heavier and more docile than the later models, more of a boulevard cruiser. “Check for suspension clonks. The cars are a little floaty, but there shouldn't be any slack or wander in the steering. The automatic gearbox should change smoothly - but can be slightly jerky on early-1970s cars - but the kickdown should be positive. And do the brakes pull you up square?”

To keep your R107 in good working order, Bailey recommends regular oil and filter changes - and to avoid long periods of inactivity. “It is better to store an SL under cover in a dry, well-ventilated space, but a good car will withstand being left outside,” he says. “Try to drive it 20 miles every three to four weeks. “To ensure the longevity of your soft top, stow it only when dry, and be sure that the space it folds into is clean and dry, too - and that its it goes back the windows and sides are neatly tucked in.

These cars need to be treated well - but this does not have to be costly. The SL Shop quotes £228.50 for a full V8 service (more prices at theslshop.com) and Bailey advises using only the correct-specification parts. “A few parts - and usually trim - are available only from Mercedes-Benz, and can be expensive. And always use genuine body panels if restoring.” Mercedes’ fuel economy figure for the 450SL is 19.5mpg, Bailey agreeing that you can expect low 20s on a run but nearer 15mpg round town, so the 4,520cc V8 will not be cheap to fuel. But the SL dream can become a reality, thanks to some prudence when purchasing.

“An early V8 feels ‘heavier’ and more docile than the later models, more of a boulevard cruiser”

Classic interior, with clear yellow on back dials and a fairly large steering wheel.

An R107 roadster with a genuine low mileage is worth paying top dollar for.

FAR RIGHT The 450SL is less sought after than the 500SL that replaced it, but is cheaper.

BELOW RIGHT Exposed screw head in the bodywork an odd oversight but build quality was high.