Test-drive Mercedes-Benz 300D W123. As the cost of fuel rises, and the price difference between petrol and diesel diminishes, diesel economy looks ever more attractive, but does it make sense in a car as expensive as the Mercedes 300D? It does not require the services of a soothsayer to predict that the latest round of fuel shortages and price hikes is going to cause a shift in car-buying patterns towards smaller, more economical cars; the American car industry, for one, has already found that out to its cost.

In the longer term, car manufacturers can also be expected to make all their products smaller, lighter and more efficient. Yet there will always be a demand for the bigger classes of car, if only because the dimensions of homo sapiens cannot be pared down, which leads to the hypothesis that one way for the inevitably greater bulk and weight of such cars to be reconciled with socially acceptable levels of fuel consumption is for the bigger cars to be equipped with diesel engines.

In that event, Mercedes-Benz is one company that will have a head start over the competition, for although Mercedes is associated in this country with large, fast luxury saloons, in Europe a substantial proportion (45 per cent) of the German company's production is made up of diesel-engined cars. You needn't look far to find the reason; while diesel fuel costs much the same as petrol in the UK, in most European countries it is substantially cheaper, by as much as 60 or 70 percent in some cases.

On the UK market, only four models of Mercedes 20-car range are powered by diesel engines, and account for only 8 percent of sales; they are the 200D W123 and 240D W123 saloons, the 240TD estate, and the 300D saloon tested here, which costs £11,146. All are members of the W123 "compact'' saloon range, but while the first three have four-cylinder engines, the 300D W123 has a "five", the odd number of cylinder arising out of Mercedes belief that the 2.4-litre four could not be further enlarged without becoming unacceptably rough, while there insufficient under bonnet space for "six"; hence the five-cylinder un which is simply the 2.4 with an extra cylinder added on, having the same layout and identical bore-stroke dimensions. 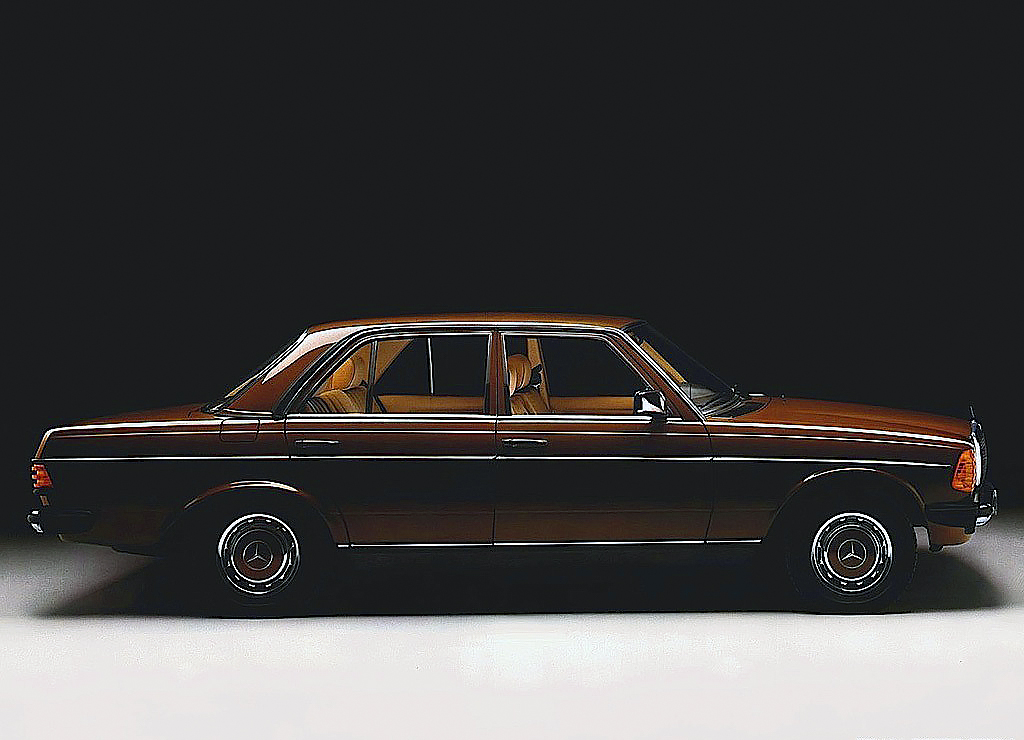 In common with the rest of the range, the W123 300D is a front engine rear-wheel drive saloon with double-wishbone front and semi trailing-arm rear suspensions, recirculating ball steering, and disc brakes all round. On the UK market, it sells as what Mercedes describe as the "connoisseur's diesel", with power steering, four-speed automatic transmission and centralised door locking all as standard, and selling at a price that places it in a market of its own. While there are a number of other similar-sized diesels available, such as the Citroen CX 2500D Pallas, Peugeot 504 GLD, Ford Granada 2.1D Mk2 and Opel Rekord D, they are all cheaper than the Mercedes by £4000 or more. The Mercedes sells instead in the company of such doughty petrol-engined rivals as the Opel Senator (£11,260), BMW 728i E23 (£11,180) and Rover V8-S (£10,699), not to mention its petrol-fuelled stalemate, the £12,351 280E W123.

While the W123 300D is undoubtedly a very fine diesel car — fairly quick and refined, as well as economical — is performance deficit compared to similarly-priced petrol-fuelled rivals is in our view, great enough to out-weigh its economy advantage; moreover, there are other, cheaper and smaller-engined petrol alternates — such as the Audi 100 CD 5E C2 and the Saab 900 GLE — that have prowled virtually as thrifty in our hands as did the Mercedes.

At present it is hard to justify the Mercedes to any but the highest-mileage commercial purchasers. However, if, as seems possible, the fuel tax structure in the UK is changed to encourage diesel cars, in line with European practice, then the Mercedes may begin to make a lot more sense.

Compared to the 200D and 240D the 300D's starting procedure is much simplified; you simply turn the ignition on and then wait a few seconds for the glow plugs to warm up — as indicated when the glow plug indicator lamp goes out — then turn the key further to operate the starter motor. The only other control is a fast idle screw. Starting is prompt and warm-up rapid, but while it's still cold the engine is very rough and clattery. Even when warm, there is much rattle and vibration at idle but once on the move the engine smooth’s out to become respectably refined, though the dieselly quality of the engine noise gives the impression that it is less smooth and quiet than it really is; in fact, our sound level measurements, such as 73 dBA at 70 mph and 75 dBA at maximum revs in 2nd gear, compare favourably with the figures of many petrol-engined luxury cars.

The same cannot be said of the performance. We recorded a maximum speed of 88.4 mph and a best 0-60 mph acceleration time (using the gearbox's manual over-ride facility) of 18.5 sec — respectable enough figures for a heavy diesel with automatic transmission, but dismal by £11,000 standards. In its defence, however, it should be said that the initial acceleration from rest is relatively less poor (the 0-30 mph time, for example, equals that of the Saab 900 GLE), so that in town traffic, up to about 45 mph, the diesel can easily hold its own; moreover, its good refinement and the standard automatic transmission mean the diesel can be made to give its best with no sense of effort or strain on the part of either car or driver. Again, on the motorway the good refinement means that it is happy to cruise all day long at near to its maximum speed.

Unfortunately such easily-achieved flat-out performance can — and in our case often did — reduce the fuel consumption to around 22 mpg, though gentler progress is rewarded with nearer 30 mpg. We recorded 24.2 mpg for the whole test; this compares to a norm of 17-20 mpg for similar sized petrol- engined rivals, a useful but not dramatic difference, and rather less impressive when compared to the 22.2 mpg we recorded with the Audi 100 Avant CD 5E, or the 21.5 mpg of the Saab 900 GLE, both also fitted with automatic transmission.

In past tests of automatic transmission petrol-engined Mercedes we have had nothing but praise for the smoothness of the gearchanges, but usually found the automatic change-up points to be too low to suit the power characteristics of the engine. With the diesel, however, this is much less apparent, and the performance figures we recorded with the transmission in "D" were only marginally slower than when using the manual over-ride.

Left to its own devices the gearbox usually starts in 2nd gear, changing to 3rd at 30 mph and to top a 58 mph. First gear can only be obtained by flooring the throttle fully away from rest when in "D" or "S" range or by manually selecting "Low" range. In either case, the automatic change-up to 2nd occurs at 22 mph. When "S" is selected, the automatic change from 2nd to 3rd s slightly delayed, and the change to top must be made manually — we got the best results by changing at a true 60 mph (65 mph indicated). The manual gear selector has a very smooth and pleasant action, but generally there is little need for its use, except sometimes to manually change down to third to compensate for the reluctant part-throttle kick-down.

Apart from smaller tyres, the W123 300D's suspension and braking are as in the more powerful petrol-engined versions; it is thus one of the safest and most sure-footed saloons you can buy, with reserves of handling and roadholding far in excess of the available performance. Mercedes' power steering is quick and accurate, providing ample assistance at parking speeds without being too light on the move, though we continue to object to the large size of the wheel. The car can be cornered hard with complete confidence, little roll, and an almost neutral attitude. Similarly, the brakes inspire enormous confidence, with powerful and progressive response and perfect weighting. Less satisfactory is the positioning of the push/ pull handbrake on the facia by the door, where it can be clouted by your knee as you enter the driving seat.

As with most German cars, the front seats have sufficient range of adjustment to accommodate even the tallest drivers, while still leaving good legroom in the rear. Space for oddments inside the car is provided by a glove locker, bins on the front doors, a useful tray on the transmission tunnel, and large pockets on the rears of the front seat backrests. The boot, which took 14.2 cu ft of our test luggage, is enormous.

Mercedes has traditionally sacrificed some ride comfort in pursuit of taut handling, and this remains the case with the 300D; some of our testers would have preferred a greater bias towards comfort in view of the car's modest performance. As it is, the ride is quite supple over uneven surfaces — the more so at high speeds than at low — and well controlled over undulations, but thumps and jars over sharp-edged disturbances such as potholes and sunken manhole covers.

Most of our testers liked the positioning of the major controls in relation to the large, well-shaped seats, but many disliked the very hard cushioning, and the sheer size of the wheel. We liked the pedal layout (with a left foot-rest), the large rotary knob for the lights, and the horn push in the steering wheel boss, but the single column stalk is overcomplicated, catering as it does for the wash/wipe system, headlamp dip/flash, and indicators.

Care is needed to avoid impacting your knee on the handbrake handle as you enter the driver's door.

You have to count the injectors to realise there's anything unusual.

Above: well-shaped seats, but most of our testers found the cushioning too hard for comfort.

Left: rear seat legroom is more than enough for a six-footer sitting behind a similar-sized front seat passenger.

Instrumentation consists of a large clock, a speedometer, and water-temperature, oil-pressure and fuel gauges, all beautifully calibrated and sensibly located immediately in front of the driver behind a single reflection-free pane of glass. The speedometer, however, is disgracefully optimistic, by as much as 5 mph even at the lower end of the speed range.

In common with the rest of the Mercedes range, the 300D has a powerful and easily controlled heating system, with separate temperature controls for the left and right- hand sides of the car. There are outlets to the rear footwells, and at face-level on the outer ends of the facia, as well as the usual front foot- well and windscreen vents. Fresh air can be obtained independently of the heater through two central face- level vents, and also through the outer vents when the heater is not in use. If there is any criticism to be made it is that flow at town speeds is weak unless boosted by the fan.

Other than at idle or after a cold start, engine noise is low, if not exceptionally so, by any standards and very low for a diesel; with the added bonus of very little wind noise, the 300D is a peaceful motorway cruiser. What continues to let it down, in common with most of its stablemates, is the poor suppression of bump thump and of tyre roar over some kinds of surface. We were also surprised to note some un- Mercedes-like rattles and creaks on our test car, though in other respects its finish was all we expect from the marque; somewhat spartan and severe in the overall effect, but flawless in detail, with perfect panel fits and not a screw-head in sight. For the price, however, it is not particularly well equipped.