All engines are, in their most essential form, air pumps. The more air you can pump through them, the more fuel it can burn, the bigger the bang, the greater the power. It’s as simple as that. But why does it matter how many cylinders a car has? In the 1960s, Porsche found itself with no fewer than three 2.0-litre racing engines, with four-, six- and eight-cylinders respectively and you’ll not be surprised to learn that the eight was the most powerful and the four the least. But why? All three engines offered the same amount of space for combustion to take place, but just divvied it up in different ways.

The main reason is that the more cylinders you have, the lower the reciprocating mass of each cylinder and the faster the engine can therefore rev. And with this increase in engine speed comes a commensurate increase in combustion and therefore power output.

Nevertheless, since the dawn of automotive time, engineers have been wary of piling on the cylinders, for this extra power doesn’t come for free. Fuel consumption can be hit because of the additional friction created by all those extra moving parts and mechanical complexity and therefore reliability will inevitably be compromised. Twice as many cylinders means twice as many pistons, con rods, valves, gudgeon pins and tappets to go wrong. The engines can be heavy and large too, not least because of the extension in block size needed to provide space between each bore. They can be tricky to cool too. But that’s not stopped race engineers upping the cylinder count in their quest for more power. V8s have been around since the turn of the last century, V12s since before the first world war.

“As an engine it worked really well, but in the car there were issues…”

But few ever felt the need to build a racing engine with 16-cylinders. And when you read what follows, you will see why.

Although some had been built previously, the first successful V16 was produced by Cadillac in 1930, not so much for its power as for the smoothness it brought to its Series 452 luxury road car. But the most famous came four years later and was the supercharged V16 designed by none other than Professor Ferdinand Porsche for Auto Union. It alone possessed the power to take the fight to the omnipotent Mercedes team in Grand Prix racing and, in 1936, actually beat them to the European Championship. But it was a fiendishly complex engine, its rollerbearing crankshaft alone was reputed to contain over 1000 components.

So who would think it a good idea to do another? The British, that’s who. Except BRM’s 1949 V16 engine made Porsche’s pre-war effort look positively sensible. Logically, the bigger an engine, the greater the justification for more cylinders. So when BRM decided to build a 1.5- litre engine to meet the regs for Grand Prix racing you might think it would have four- or sixcylinders. But no, BRM went for 16, displacing just 94cc each. It was in many ways an incredible design, revving to 12,000rpm and producing almost 500hp thanks to its supercharger. But its power delivery was so peaky, Stirling Moss described it as the worst car he’d ever driven. Which was when it was running, which wasn’t often because the engine was so far ahead of its time, the metallurgy didn’t actually exist to allow it to function properly. It took BRM four years to get it working properly, by which stage the car it was in was obsolete.

The V16 was such a disaster, you’d think BRM would never think of doing another. But it did. BRM’s 3.0-litre 16-cylinder motor of 1966 was technically actually an H16 and was in fact far more sensible in concept because it was effectively two of its highly successful 1.5-litre V8 engines flattened out with one lying atop the other. But it was still heavy and unreliable and while it did win one race (the US Grand Prix), that said more about the Lotus chassis into which it was fitted and the fact that Jim Clark was driving it, than any inherent qualities of the engine itself. Only six cars finishing helped its prospects too.

So there you might have thought the story of the racing 16-cylinder motor would be allowed to lie. Nice in theory, nightmarish in practise. But Porsche was about to write a new chapter. We must now spool forward to 1970 and the tussle between Porsche and Ferrari for the World Sports Car Championship. As you will know, in the 917 Porsche had one of the greatest sports racing cars of its time while the Ferrari’s response was the 512S. All season the Ferraris were on a hiding to nothing because the Porsche was both lighter and more powerful: the 512S was prepared in a rush when it became clear that Porsche had defied the rule makers and actually got the 917 homologated to race. But there was a fear at Porsche that were Ferrari actually able to design its successor at a speed of its choosing, it could end up with much more of a fight on its hands in 1971.

“It was a monster. The motor was so long you could hear one end start up before the other”

At the same time, Porsche also knew that come what may, sports car regulations would change for 1972 meaning only a car with a 3.0-litre engine could run as a prototype and therefore win races. Looking at the impending obsolescence of the 917 as a sports car, Porsche started looking at ways of preparing it to race in the North American Can-Am series.

The problem was that Can-Am was dominated by McLaren whose vast 8.0-litre plus Chevrolet engines developed 750hp – approximately 130hp more than the best Porsche 5.0-litre 917 engine. The good news was that Can-Am had no engine rules of any note, so Porsche could enter a car with any motor it liked.

History tells us it ended up simply turbocharging the engine it already had and wiping the floor with everyone, but not before one last 16-cylinder flirtation…

The inspiration for the 16-cylinder 917 engine came from none other than Ferdinand Piech whose grandfather had designed the Auto Union motor all those years ago: “We did it because it was actually quite easy to do and Piech wanted it. As an engine it worked really well, but in the car there were issues…”. The words belong to Porsche engine guru Hans Mezger, who led the development work of the new engine.

The idea was simple enough: you took the existing flat-12 motor and literally added a cylinder at each corner, so retaining the same pistons, rods and valves. From the 5.0-litre motor this gave a capacity of 6.6-litres and a nominal power output of around 800hp, which would put Porsche within fighting distance of McLaren even when taking into account the 917 which would be a little heavier than its British rival. But the 917 engine had also been built in 4.5-, 4.9- and 5.4-litre capacities, so the scope for an engine of as little as 6.0-litres or as large as 7.2-litres was possible using existing parts stock. According to Karl Ludvigsen’s Excellence was Expected, a maximum power output from the largest engine could have been as high as 880hp, which really would have given McLaren something to think about.

It was certainly sufficiently promising to put in a car, and also to indulge in a little mischief, to which we shall shortly return. The car chosen was the 917 PA Spyder that Porsche had entered into Can-Am races in 1969 with a standard engine, just to dip its toes into the series and see how it worked. But the car first needed to be butchered, its spaceframe requiring a massive 270mm extension in its wheelbase to accommodate the vast new engine.

But an engine on a bench and an engine in a car are very different prospects. Because Porsche did not attempt to reinvent the wheel with its design but instead develop it using proven componentry, the engine was actually an extremely reliable, if costly, unit to run, so whatever its other issues might me, those that dogged BRM would not be among them. The problem was what it did to the car it was in.

Stretching a car’s wheelbase so substantially will totally change the way a car handles, trading agility for stability. But so too will it compromise the torsional rigidity of a spaceframe structure. Add the extra weight of the engine (claimed to be as much as 70kg) and then the extra work that engine asks the chassis to do and perhaps it’s not a surprise that the Spyder was unable to cope with an engine of which it had never been designed for. Jo Siffert tested it extensively but by the time the decision needed to be made to approve or shelve the design, Porsche had already realised it could find that much power or more, plus additional torque without changing the wheelbase at all, thanks to that newfangled contraption called the turbocharger.

So the flat-16 was set aside, but not before it performed one more very useful function for Porsche; the mischief mentioned earlier. When news of the engine broke, Porsche released a photograph of it next to the standard 12-cylinder 917 engine, but craftily shrunk the 16 so it looked the same size. It can never be known, but it has been suggested that when Ferrari saw the image, it was believed to be an all 5.0-litre engine for the 1971 season to which Maranello would have no answer. In time Ferrari would announce it was ceasing development of the 512S and would instead concentrate on its 3.0-litre car for the 1972 season, giving Porsche a clean run at the 1971 title, which it grabbed with both hands. The irony is much of Ferrari’s development work had already been done and the result, the 512M (for Modificato) won a non-championship round at Kyalami in South Africa in November 1970, trouncing the 917 and becoming the only Ferrari ever to beat a 917 in a straight fight. Had Ferrari raced it in 1971, that season might have had a very different conclusion…

The only racing driver I’m aware of who drove the Spyder with the 16-cylinder engine was soonto-be Can-Am champ Mark Donohue who said: “It was a monster. The motor was so long you could hear one end start up before the other. Although it wasn’t setup properly to try for any lap records, it was truly impressive in a straight line.” Porsche still has at least one complete flat-16 engine, and the last time I saw it, it was still in the back of the PA Spyder. And every time I go to the museum, or bump into museum staff around the world, I ask them when they’re going to restore it and fire it up so we can hear what a 7.2- litre, flat-16 racing Porsche engine sounds like. If they do it, there is barely a place on the planet to which I would not travel to hear it. 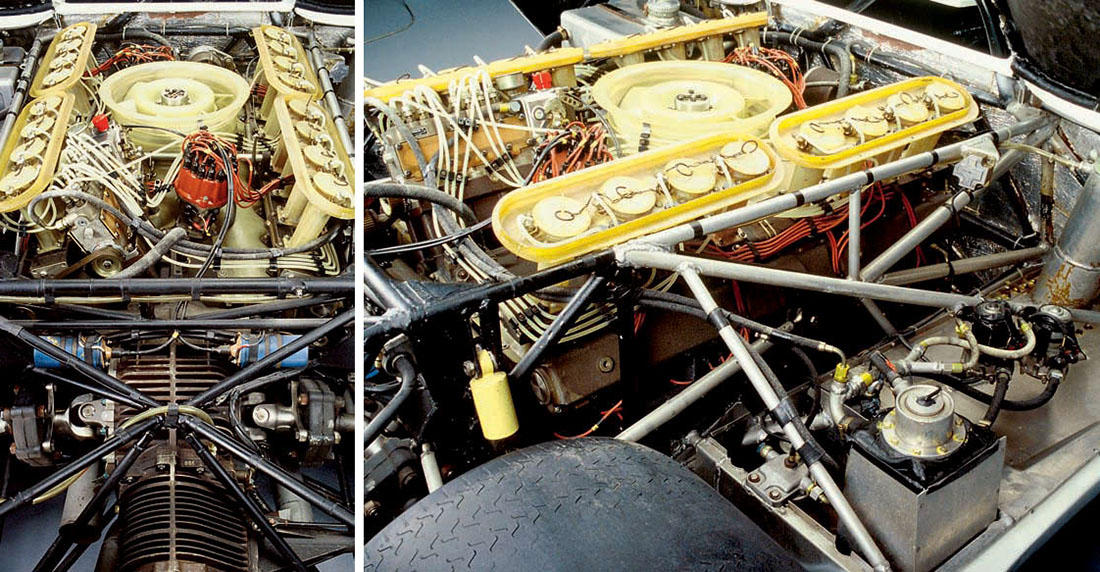 Ferdinand Porsche designed a 16-cylinder motor for Auto Union in the 1930s, Ferdinand Piech later used his grandfather’s work as inspiration for his own version. 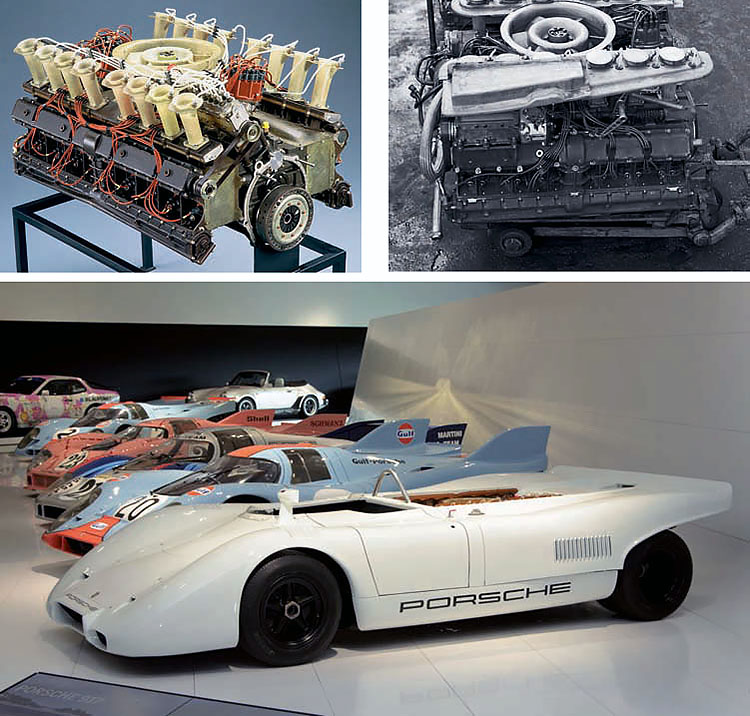 Left: The 1969 PA 917 Spyder sits in the foreground at the Porsche Museum in Stuttgart. Above: The Type 917/16-cylinder engine.