Newest and fastest model in BMW's successful 3-Series E30, the 1985 BMW 325i E30 produces sparkling performance from a gem of an engine. If you're looking for the prime mover in BMW's spiralling success, look no further than its 3-Series E30 range. Since the range was facelifted and updated in October 1982 it has gone on to become the most successful in the history of the Bavarian car maker, total production to June 1983 cresting the 670,000 mark, making the 3-Series E30 the third most-produced German car on the basis of daily production after the VW Golf and the Opel Kadett.

Earlier this year it also became BMW's widest range, the introduction of four-wheel drive, cabrio, diesel and high-performance M3 versions swelling the ranks of BMW's smallest car by around 100 per cent. The newcomer of immediate interest to the UK, however, is the 325i, the car that replaces the most exciting of the existing models, the E30 323i, and arrives in BMW's showrooms next week. 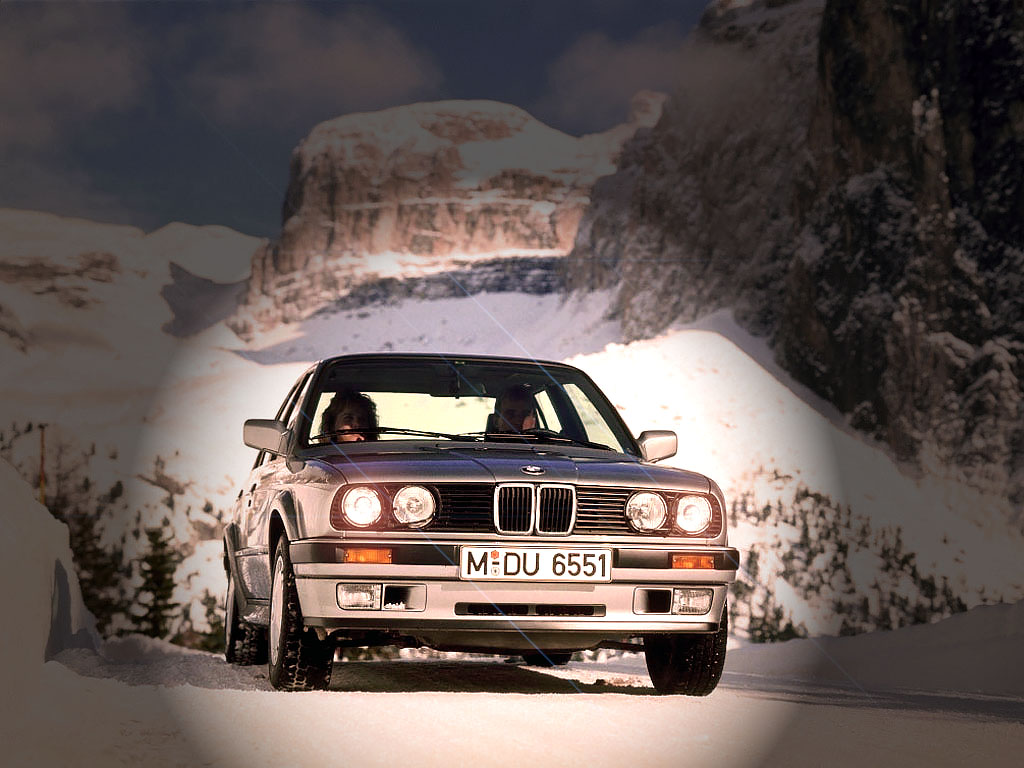 To cope with the extra power, the 325i gets lowered suspension (by 5 mm at the front and 10 mm at the rear), gas-filled dampers and revised geometry for the rear semi-trailing arms, changes which, according to BMW's engineers, improve ride comfort without sacrificing cornering power. Spring rates and anti-roll bar diameters remain the same. Complementing the changes, the 325i's 195/60 VR 14 Pirellis have been replaced by 190/65 VR 14 Michelin MXVs, the non-assisted steering now features a variable ratio rack (power assistance remains a £457 option) and the battery has been relocated to the boot to improve weight distribution.

The big interest, however, is under the bonnet. The new 2494 cc engine is based on the block of the economy-concept 2.7-litre eta unit and capped by a new cylinder head with large intake and outlet tracts and valves, a new combustion chamber, double valve springs and a modified radiator system. Of equal significance is the switch from mechanical fuel injection to Bosch ME-Motronic, which constantly monitors parameters such as engine temperature, engine speed and throttle opening to determine both the quantity of fuel to be injected and the ignition timing. An oil cooler is fitted to avoid overheating when the engine is running at maximum output. That now stands at 171 bhp at 5800 rpm and 167 Ib ft of torque at 4000 rpm.

You would expect the 325i to be fast, and it is. The temporary closure of Millbrook's high-speed bowl denied us the opportunity to verify BMW's 135 mph top speed claim but we know from experience that its engineering department isn't given to wild exaggeration. At this speed the engine is pulling 5970 in fifth, just a little over the 5800 rpm at which maximum power is developed: we'd be surprised if 135 mph wasn't realised on a flat autobahn. That being the case, the 325i places a useful buffer between itself and the rivals we've ranged against it in the sub-£12,000 sporting executive class: the fastest among these are the MG Montego Turbo (128.6 mph) and the Alfa-Romeo 90 (127.4 mph). Even Mercedes' vastly more expensive W201 190E 2.3-16 (137.1 mph) is hard-pushed to outpace the 325i; Mercedes more obvious price-rival (the straight 190E W201) is left struggling at the back of the pack with 121.0 mph.

The BMW's sprinting ability is no less forceful, aided by fine traction off the line and an engine that revs exceptionally freely to the 6500 rpm ignition cut-out. From a standstill, 60 mph is reached in 7.4 sec and 100 mph in 21.3 sec, the quarter-mile and kilometer posts being passed in 15.7 and 28.8 sec respectively. These figures (like the top speed, almost identical to the Mercedes-Benz 190 2.3-1 6's W201) help keep the Bavarian car near the top in our performance comparisons, though the furiously fast Montego Turbo is capable of matching the 325i to 60 mph (7.4 sec) and pipping it to 100 mph (20.9 sec). The all-action MG outshines the BMW when it comes to mid-range punch, too, but turbo-cars traditionally excel in this area. What the BMW's 2.5-litre straight six has in its favour — a remarkably wide power band with no appreciable peaks or troughs — is of more use on the road: in fourth, all the 20 mph increments between 20 and 90 mph are covered in under 8 sec. Some rivals have comparable 30-50 mph times (7.5 sec for the Sierra 4x4 and 7.4 sec for the Montego Turbo against the BMW's 7.5 sec) but none can lug through 20-40 mph in just 7.9 sec and only the MG matches the BMW's 7.9 sec 70-90 mph time. Compared with the superseded 325i (our figures are for the early 139 bhp version, although power was later increased to 150 bhp), the 325i's showing represents an improvement of around nine per cent on standing start acceleration and 18 per cent in fourth and fifth.

Judged on test track figures alone, then, the 325i is a flyer. But the figures hardly do justice to an engine which, for smoothness and refinement, must currently rank as the finest of an impressive collection from Munich. Even the smoothest four-cylinder engines (the W201 190E 2.3-16's, for instance) fall far short of the standard set by this M20 2.5 "six" which zips round to the 6500 rpm "red-line" with such an uncanny absence of fuss and vibration that an eagle eye needs to be directed towards the rev counter to avoid constantly hitting the ignition cut-out. The engine is also outstandingly quiet when revved hard, our noise meter reading of 73 dB being among the lowest ever recorded for full throttle in second gear. As is now almost unfailingly the case with Bosch Motronic injected engines, throttle response is squeaky-clean and running in traffic queues even-tempered. Nor do engines come much more tractable than this one: floor the throttle at 500 rpm in fifth and the car just eases slowly away without grumble, rumble or shake. The engine note won't raise the small hairs on the back of your neck, but its muted hum has plenty of appeal for fans of the understated.

It's just as well that the 325i is reasonably parsimonious because, at around 1 2 gallons (55 litres), its petrol tank is rather mean. Driven hard the BMW is unlikely to improve much on our overall figure of 22.4 mpg and even the projected touring figure of 31.2 mpg allows a mediocre practical range of around 350 miles. Even so, its touring figure is among the most economical in its class. Four-star petrol is recommended.

The shift of the 325i Getrag five-speed gearbox, like that of just about every other contemporary BMW, is a model of lightness and precision, though its slightly rubbery quality might be criticised by some. Less satisfactory are the intermediate ratios which, with the change to a shorter final drive, now become rather short, allowing speeds of 31, 54, 85 and 119 mph to be reached at 6500 rpm in the first four gears. On the road second proved too short for tighter bends. Naturally, the gearing in top has also changed and, at 22.6 mph/1000 rpm (25.6 mph for the old 325i), means a fairly busy 3100 rpm at 70 mph. Some whine is noticeable in first and second but the clutch was praised for its lightness and well- cushioned action.

BMW's move towards higher profile tyres and softer suspension settings for the 325i in the UK has not fundamentally altered the ride/handling compromise established by the car it supersedes, the successful 323i.

BMW's engineers have met with a fair degree of success in their endeavours to improve upon the ride of the 323i, the 325i soaking up small lumps, bumps and ripples far more effectively yet retaining enough control at speed to avoid float and wallow overlong-amplitude undulations.

Furthermore the transformation in ride quality has been achieved with no discernible cost to handling precision and balance. Certainly with no change to the power-assisted rack and pinion steering's four turns lock-to-lock, the 325i requires just as much arm-work around town and when parking. The small difference between old and new only becomes apparent when the traffic clears and more is asked of the chassis. Where the 323i turned-in quite crisply in spite of its low-geared steering, the new car feels slightly "soft" by comparison, drawing attention to the low gearing (surely unnecessarily low, even if only minimal assistance is required). This can be explained by the greater slip angles of the 65 per cent aspect ratio Michelins but, since it is confined to turn-in alone, it is a small price to pay for the extra ride comfort.

The good news is that the 325i E30 understeers no more strongly than you would expect once settled on to a cornering line, albeit with a surprising degree of roll. Through a series of fast S-bends, however, this is scarcely a problem, the 325i displaying fine roll damping and transient control. As before, oversteer can be used to balance the car's cornering line with deft applications of throttle, though in the 325i's case, it isn't quite so easy to administer because the stronger initial understeer is harder to overcome. Moderate injections of power effectively kill the understeer on tight to medium-radius bends while bigger throttle openings send the tail into a gentle and easy-to-catch slide which is almost self-correcting.

The 325i is just as easy to control in the wet where grip and traction are surprisingly good (BMW has moved the battery to the boot to aid the latter) but suspension and tyres are more lightly loaded. A degree of care is called for here because oversteer is easier to promote with the throttle, but so gentle and progressive is the resulting slide that the skilled driver can press on without fear of the car biting back. Nor is the prospect of the tail snapping out of line if the power is cut mid-bend a very real one. Whatever the 3-Series E30 dynamic shortcomings in the past, lift-off oversteer is no longer one of them.

The brakes however warrant a black mark: they are certainly powerful and pull the car up four-square, but the pedal feels dead and heavy, and it proved difficult to feather off smoothly when coming to rest.

For the rest, the 325i is barely distinguishable from the 323i it replaces, a car that has been described many times in these pages. In spite of the promise of its four-doors, room in the rear is severely limited: if two six-footers are sitting in the front, rear legroom virtually disappears altogether. By contrast, the driver is well looked after. The driving position caters for a wide span of shapes and sizes and the control ergonomics are all but faultless. Visibility is excellent, too, complemented by efficient wash-wipe systems and powerful headlights with well-defined beams. The instrumentation is simply presented and beautifully clear, the heating powerful and easily regulated, the ventilation independent and capable of supplying copious amounts of fresh air at face level. Less impressive as the years go by are the cabin trim materials which, while undoubtedly of good quality and hard wearing, are low on aesthetic appeal lending a drab, even sombre, air to the interior. In terms of build, assembly and detail finish, however, the BMW is still hard to beat at the price.

Such things undeniably make a salient contribution to the image and cachet that is BMW. But performance, refinement and efficiency — both in a straight line and round corners — are the real draw. The old 323i E30 encapsulated these qualities perfectly in a package that was compact, stylish and affordable, if basically equipped. The 325i is the same but better. Without question the new car has a still better and more refined engine; almost certainly the smoothest straight-six currently in production. It offers more performance-per-£, too. And thankfully, in the quest for more comfort, handling dynamics haven't been sacrificed on the attar of compromise. Some drivers, of course, will want still crisper cornering: they will be prepared to pay £1395 for the "M-Technics" sports pack which includes tauter, lowered suspension. But the rightness of the original 323i has been preserved.

Heart of the 325i E30 — the BMW M20B25 six-cylinder alloy-head engine with Motronic fuel injection.