1981 Amex DeLorean DMC-12 Drive-my.com and Matthew Howell
Rate this item
(1 Vote)
Tagged under
Read 1235 times Last modified on Friday, 24 February 2017 20:16
Tweet
A36-year-old car with only nine miles on its odometer will always be a freakshow. Sure, they pop up occasionally. Sometimes it’s a Vauxhall Chevette, perhaps, that’s been cosseted in the back of a family-owned showroom, the kind of place where sentimentality has got completely out of hand. More likely it’s the first or last example off a production line, such as Jaguar Heritage’s own treasured, nine-mile XJ220 prototype.

This DeLorean DMC-12 has itself a little over nine miles displayed within its brittle black facia. It’s a wonder it covered even that distance, really, because not one drop of water, petrol or oil ever coursed through its mechanical veins. Nine miles is quite a lot of pushing.

Admittedly, the instruments aren’t the first thing that gives this DeLorean a special aura. I think you’d notice the all-over gold-plating first, what with the way shafts of reflected sunlight would sear their trajectory onto your retinas should you catch it from the wrong angle.

The delivery mileage and the gold are interlinked. When DeLorean embarked upon this most audacious, opulent and (some will say) tasteless exercise in limited editions, one thing was assumed from the start: the last thing on any owner’s mind would be driving the car. No fluids were ever poured into this one; they might have triggered eventual corrosion.

In 1979, credit card giant American Express started casting around for ideas. Its Gold Card had inhabited the wallets of high-net-worth customers for 15 years at that point, and was overdue for a marketing push. 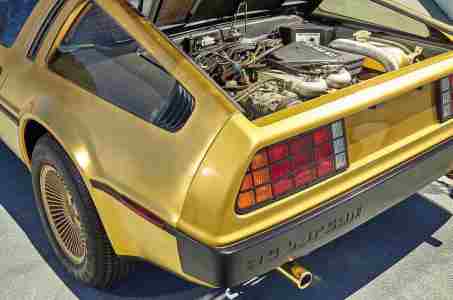 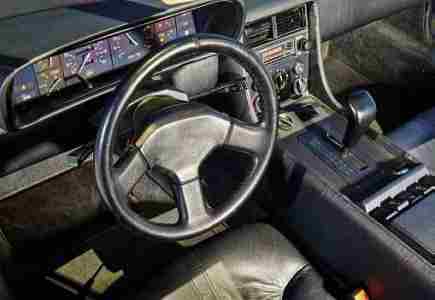 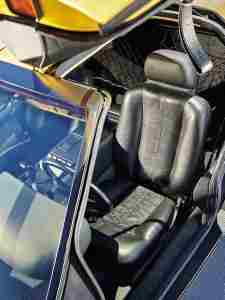 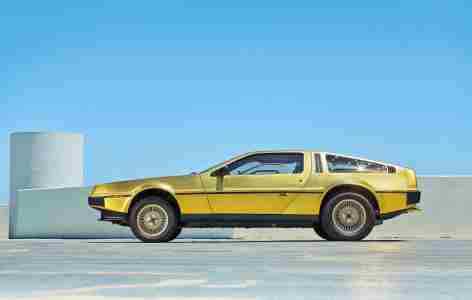 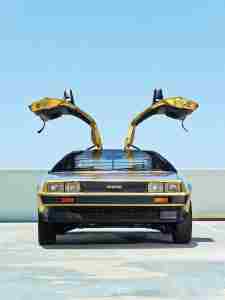 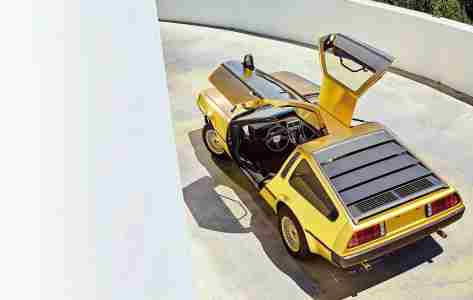 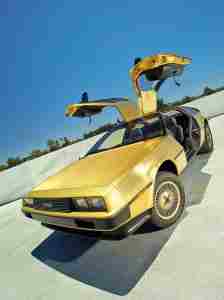 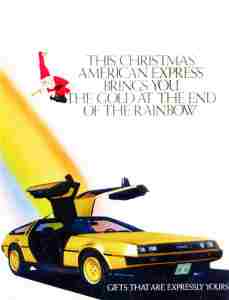 Below left and above. Unworn cabin is testament to 20 years as a centrepiece in a Texas bank; the rear-mounted 2.8-litre V6 has never fired. Left and right. A mock-up starred on the cover of the Amex Christmas Catalogue; this car is one of three that escaped into the wild.

Concurrently, the first shipments of John Z DeLorean’s new luxury sports cars were arriving at 300 showrooms across the States. There was only one colour option, the dull silver-grey that was unavoidable because of those unpainted panels worn by the gullwing two-seater with such pride. As soon as someone suggested that sprinkling a little gold dust over them would make a great rolling ad for Amex – using the most talked-about car around – the idea was unstoppable. When the DeLorean team were consulted, they were just as keen.

The promotion was launched in a blaze of glory in December 1979, as only Americans knew how. The goldplated DeLorean was the star of the American Express Christmas Catalogue, even though the car shown, with a green credit card instead of a number plate, was still a mock-up illustration.

‘As befits its extraordinary character,’ purred the blurb, ‘the entire corrosion-free stainless-steel outer body panels of this limited-edition Delorean will be electro-plated with pure 24-karat gold.

‘A sportscar so spectacular that it surpasses the imagination,’ it went on… before unwittingly alluding to the thing that did eventually make the car a true pop culture icon. ‘The DeLorean glides into the future with a grace and authority that is seldom seen. The luxury is unbelievable. Specially commissioned by you alone… your 24-karat gold Delorean will move you like you’ve never been moved before – 0 to 60mph in under 8 seconds.’

The price was truly astronomical. At $85,000, it was more than three times the price of a regular DMC-12, and customers were obliged to put down a $10,000 deposit using their American Express Gold accounts.

‘Not a single scratch could be afforded because, unlike with the standard stainless steel finish, there’d be no way to remove it’

‘Each of the car’s panels would have been immersed in £200,000-worth of precious metal, in today’s money’

‘Customers were obliged to put down a $10,000 deposit using their American Express Gold accounts’

The DeLorean Motor Company had plenty of problems already. Heaped upon them was an extra one – having promised the world’s first gold-plated production car, now came the chewy issue of actually creating it. This one landed with a heavy thud on the desk of the company’s senior buyer Stewart Craven in May 1981. Delivery had been quoted as June 1981 from the start, but DeLorean had understandably waited to see how quickly all the limited edition of 100 cars would be snapped up.

The final tally was an unmitigated disaster. There were just two firm orders. On top of that, every British specialist plater fought shy of getting involved, perhaps aware of the considerable risks involved in electrically attaching gold plate to brushed stainless steel.

‘I have a 100-litre tank that can hold approximately £8000-worth of gold in molecular form,’ he says. So each of the car’s panels would have been immersed in £200,000-worth of precious metal, in today’s money. Having hung on until 28 August 1981, there was still no last-minute rush, and so, a week later, three sets of plain DeLorean panels, wheels and trim parts were delivered to Degussa – two for the ordered cars, another for a set of spares – and, on 15 September, Craven and two colleagues flew overnight to Germany to oversee the work.

It took three heavy days to complete the plating. Once the parts had been carefully crated and loaded for the long road trip back to Belfast, the DeLorean staff bade the Germans goodbye, only to receive bemused looks. It was late on Saturday; did they not realise it was illegal to drive a lorry on German roads on a Sunday? But Craven had thought of that. The only wagons allowed to flout the rule were refrigerated food trucks, and that was just what they’d organised. With two drivers, it sped non-stop to reach Dunmurry by Monday morning.

Waiting for them was a specially cordoned-off part of the factory, spotlessly clean and with burly security guards already on duty. A crack team of senior assembly staff and supervisors were ready to start attaching the dazzling metal panels – said to be worth up to $10,000 apiece – to the Delorean’s plastic base unit. Rings and watches were banned and everyone wore protective gloves. Tools were kept to a minimum and at a distance because any kind of spanner in this particular works would have been a catastrophe during the two-week process.

Not a single scratch could be afforded because, unlike with the standard stainless steel finish, there’d be no way to remove it. ‘It is possible to plate directly on to stainless steel,’ says Richard Fox. ‘But the surface finish would be just as susceptible to greasy finger marks afterwards, so you would need to keep your mitts off.’

This would be the dominant handling issue for the gold DeLoreans forever afterwards. And remember, they weren’t going to be driven and so needed to be wheeled everywhere, constantly at the mercy of careless fingers and thumbs.

The first car – the one in our pictures, with VIN number 4301 and automatic transmission – was delivered to its new owner on 12 October 1981. He was Roger Mize, president of Snyder National Bank in Snyder, Texas, USA. He paid for it in one, vulgar $85,000 transaction on his Gold Card. True to the precious ethos of these weird vehicles, actually driving it was never considered. The doors to the bank’s head office were removed and the DeLorean was slowly and carefully rolled into its lobby, where it was immediately encased in an armoured, airtight glass box. Three days later, the Bank threw a slap-up party to celebrate, and for the next 20 years the car was a gleaming local landmark.

The second one went to Sherwood Marshall, Canadian naval officer turned entrepreneur. With VIN 4300 and manual gearbox, it was unusual in featuring a tan leather interior (regular DeLoreans were black or grey inside) that was a try-out for a proposed factory option. Sherwood clearly could not resist the temptation to play King Midas on the highways, as it covered 1442 miles in his ownership. Eventually, both ended up in museums. The Marshall car was donated to the National Automobile Museum in Reno, Nevada, while the car on these pages is housed at the Petersen Automotive Museum in Los Angeles. Roger Mize died in 2003 and in 2009 his family gifted it to the museum. When not on display, it is housed with the rest of the reserve collection in the vault.

That would have seemed to be the end of the entire, ridiculous episode. Yet there was one more official goldplated DMC-12. That spare set of panels mothballed at Dunmurry was never called upon and, as the marque and its factory were in their death throes in 1983, it was decided to fit them onto another car, VIN 20105. This was duly completed in Columbus, Ohio, by Consolidated International. They were just one gullwing door short (wonder which disgruntled ex-employee filched that?), so another was quickly plated, and consequently it was very slightly different in its final tone.

Consolidated had bought the entire bankrupt stock of unsold Deloreans, and offered its gold-plated one in a raffle through a department store it owned called Big Lots. The winner clearly had no misgivings about showing it off, as it covered 636 miles before rocking up finally in a private collection in Maryland.

Gold-plated cars have since gone relatively mainstream, some of them air-freighted to London each summer by Middle Eastern owners to dazzle the doormen and tourists outside Harrods, and blaze up and down Park Lane. But the authentic, 24-carat look is one more added to the list of bizarre firsts for which the notorious DeLorean DMC-12 can be thanked. Or blamed.

THANKS TO Petersen Automotive Museum, www.petersen.org.

As is ever the case, the otherwise excellent article about the 24-carat gold-plated DeLoreans by Giles Chapman contains the odd DeLorean myth.

Despite Giles’ claim of no fluids being added to the cars’ ‘mechanical veins’, both of the gold-plated cars were filled on the assembly line before routine testing on the company test track at Dunmurry, in common with each of the other 9078 cars produced, as can be seen from the attached photograph [above].

No ‘disgruntled ex-employee filched’ the missing spare front fender, as conjectured amusingly by Giles. It was actually damaged in transit to Degussa’s contract gold-plater, Holders in Baden- Württemberg, near Stuttgart. There, the heroic senior buyer Stuart Craven received so little co-operation that he and his two colleagues, Len Nelson and George Fraser, virtually did the plating themselves with minimal supervision before their epic Sunday drive through Germany in the refrigerated food truck.

Richard Fox is correct in stating that sufficient gold had to be acquired to fill a far greatercapacity tank than his 100-litre version. However, I can assure you, as I did the deal, that only the gold deposited on the cars’ panels was paid for. The shortterm cashflow problem of the outgoing £200,000 deposit (at today’s gold price) was quickly put right by an immediate refund of the major balance.

Although John DeLorean and Amex were clearly disappointed that only two cars were bought, that feeling wasn’t shared by the Dunmurry management team. The prospect of the full 100 on offer being snapped up had been an ongoing nightmare for all of us.