A Tragedy But Nearly A Triumph DeLorean

It ended up bankrupt, but DeLorean came close to reviving the Triumph TR7 and TR8. A political misunderstanding put paid to that. Words Richard Bremner.  The Trouble with political projects is that they get embroiled in… politics. It was politics that made the birth of the DeLorean possible, and it was politics that ultimately snuffed the project out.

The DeLorean was the dream of a highly talented auto industry executive, John Z DeLorean. The DeLorean also became a dream for politicians looking for an enterprise that might bring hope, and jobs, to a strife-riddled area of Northern Ireland. And for many of its eventual employees, the DeLorean Motor Company was a dream that for a short time provided a happy reality – a decent job for 2500 of them.

At the time of the DeLorean Motor Company’s birth and putting down of Northern Irish roots, the UK’s then Labour Government was a majority shareholder in British Leyland, while the French Government had a majority interest in Renault. DeLorean, on the other hand, was a minnow and would never be anything more than that, even if it became successful. That was an outcome known to be relatively improbable even to the British Government, the Northern Ireland Department of Commerce commissioning a report by management consultants McKinsey which suggested that, if annual volumes of 20,000 were met in year three, the venture would be profitable. Anything less would result in financial struggle. 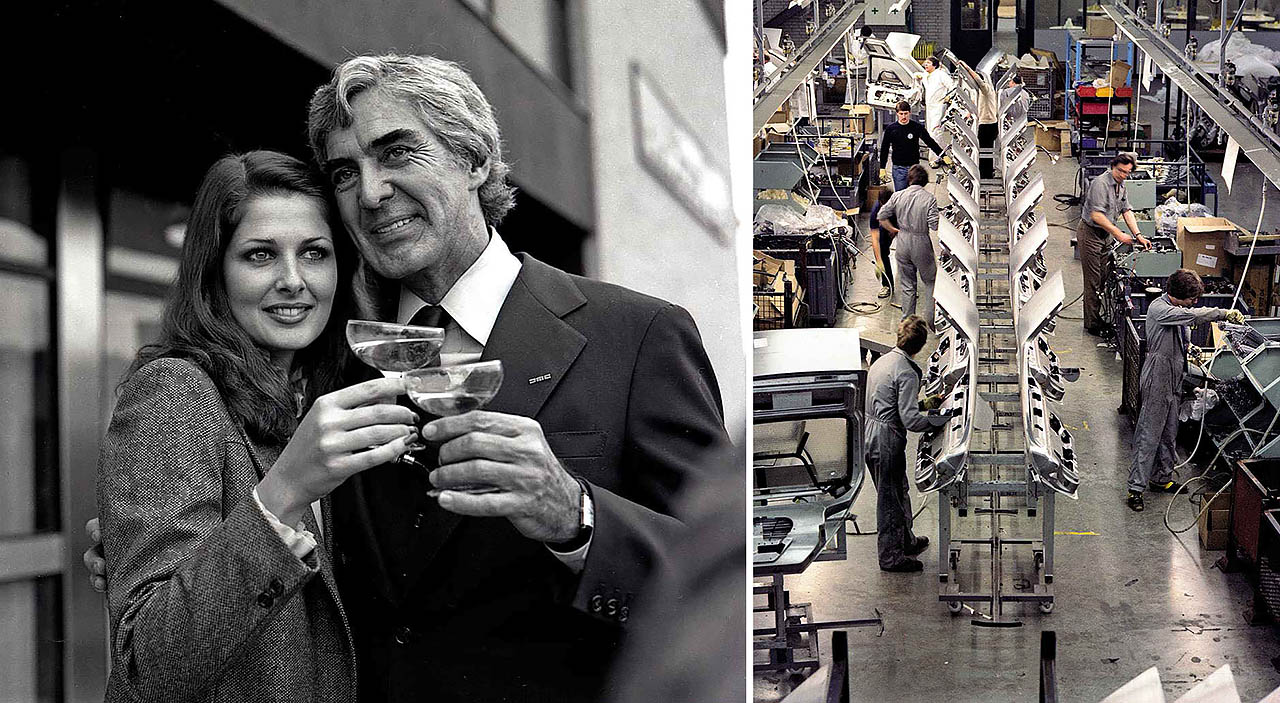 But the high risks didn’t stop the UK Government successfully battling with Puerto Rico as an alternative location for the factory. The £53m project was about a lot more than making a profit, of course, the aim being to establish a flourishing business that might attract more investment into Northern Ireland, potentially diminishing the violence blighting the province. In the four years up to 1978, when construction of the plant began, there had been more than 700 deaths and 7000 injuries despite the presence of 22,000 military personnel.

And for a while the DeLorean plant did provide jobs for people on both sides of the political divide, unifying them into a team which, together with high-powered experts recruited from the motor industry, delivered a striking new car. And in the market at which it was aimed – the USA – it got a terrific reception. Plenty of orders, too.

What came next is almost as dramatic as the Back to the Future film in which a DeLorean starred, though too late to save the factory that made it. The embezzlement of some of the Government’s £53m (unspotted by accountants Arthur Andersen), the involvement of Lotus and the apparently ‘convenient’ death of its boss Colin Chapman, and the cocaine-bust framing of John DeLorean and his subsequent acquittal built a saga that has been told many times.

Less familiar is the story of how the company was very nearly rescued from receivership in a deal which would not only have revived the DMC-12, but also a British sports car whose corpse was still warm.

‘We kept our mouths shut for a long time,’ says Barrie Wills, who was instrumental in putting together a business plan with opportunism and ingenuity that gave it a genuine chance of succeeding. Wills was one of the first to join DeLorean and among the last to leave. He was appointed as director of purchasing in October 1978 and became chief executive in May 1982 during the receivership period, when he and managing director Chuck Bennington mounted their rescue plan.

The clever part was to expand DeLorean’s range by adding a second model which would increase revenue for the company and its dealers. The chance to do just that came when BL Cars abruptly ended production of the Triumph TR7 and TR8 in the summer of 1981. ‘We thought we could save DeLorean by putting the two cars together. The idea was to perform a low-cost restyle of the sports car,’ says Wills.

The process of gaining permission to build the car was eased by the fact that BL Cars was majority owned by the UK Government. Wills recalls co-presenting the plans to BL directors in a meeting that should have included Austin Rover’s fiery managing director, Harold Musgrove. Wills realised that Musgrove effectively was present when he spotted him listening on the other side of a door that was slightly ajar. ‘It’s one of the favourite moments from my career,’ he says, laughing.

‘BL would not allow the Triumph or TR names to be used, so we planned to rebrand the car as a Healey, with Geoffrey Healey’s approval. Healey 3500 would be the V8, Healey 2000 the 2.0-litre. And the DeLorean Motor Company would be renamed the Dunmurry Motor Company,’ Dunmurry being the West Belfast suburb where the DeLorean was made. In the meantime, the TR7/8 element was known as the i-car, decades before Apple’s iPhone.

The ‘UK Consortium’, as the Wills-Bennington rescue team was known, did not plan to remanufacture the TR7/8 unchanged, and they also had the challenge of working out how to build it. They turned to Irish pressings specialist Laepple (still flourishing today, and which pressed the DMC-12’s panels) to accommodate the ex-BL presses and make the body. Painting it was the next hurdle – the DeLorean needed none, of course, being skinned in stainless steel. But a relatively new paint facility became available following the closure of a Nissan assembly plant in the Republic of Ireland, which shut after Irish import duty changes eliminated the need for local manufacture. The painted bodies could then be shipped to Dunmurry for final assembly. With this solution, Wills and Bennington had overcome one of the key flaws of the original DeLorean plan, which was that it was an economically risky one-car plant. ‘The TR8 was to go alongside, and there would have been a four-cylinder TR7 for the domestic market along with a right-hand-drive DeLorean,’ says Wills. ‘We developed a fiveyear plan with a facelifted DeLorean.’

Wills hoped they could persuade the DeLorean’s designer Giorgetto Giugiaro to help, even though ‘at this point we owed him a chunk of money’. Despite this there were ambitions to have the maestro turn his hand to a facelift for the TR7, too. That would been a rich irony, this being the car of which the great designer famously said, ‘My God! They’ve done it on the other side as well!’ when he first gazed at the Triumph and the curious rising creases in its flanks.

In the meantime, freelance designer Ed Peppall, a former colleague of Wills from his Reliant days, produced some promising sketches of a crease-less TR8 convertible sporting new bumpers and air intakes. A wooden scale model was also made, which survives in the DeLorean museum in the US. The plan was strong enough to persuade merchant banks 3i and Hill Samuel to gather the money. ‘We needed £20m,’ says Wills. Outside investors were to raise most of this, the Government only needing to contribute between £20,000 and £80,000 in fees via the Northern Ireland office. ‘Minister Jim Prior was supportive but a Tory wet, who decided he needed to clear it with Thatcher. There was never a cabinet meeting to discuss the situation, which was moving very fast.

‘We heard that Prior had botched his presentation to Thatcher, in that he confused her by giving the impression that the “UK Consortium” had no funds at all. As a result, Thatcher thought we were asking the Government to put more money into DeLorean. However, the lady didn’t listen properly to Prior. “Tell the receivers to do their job! There will be no more money!”’

The £80,000 fee was a negligible sum even in 1982, but Thatcher was ideologically opposed to any form of Government funding for business, and had more pressing issues besides. The project’s bridge-building achievements appear to have been discounted, even though it had hired an approximate 50-50 mix of Catholics and Protestants, many of whom now socialised. In that sense it was a significant success, and might have continued to attract more tensioneasing businesses to the province.

But this, the first major commercial enterprise in the area since the building of the 1912 RMS Titanic, was forced to die. In large part this was because Margaret Thatcher had lost patience with it, and had misunderstood the request. Those few seconds of impatient misunderstanding condemned not only the DeLorean, but also the TR7 and TR8. 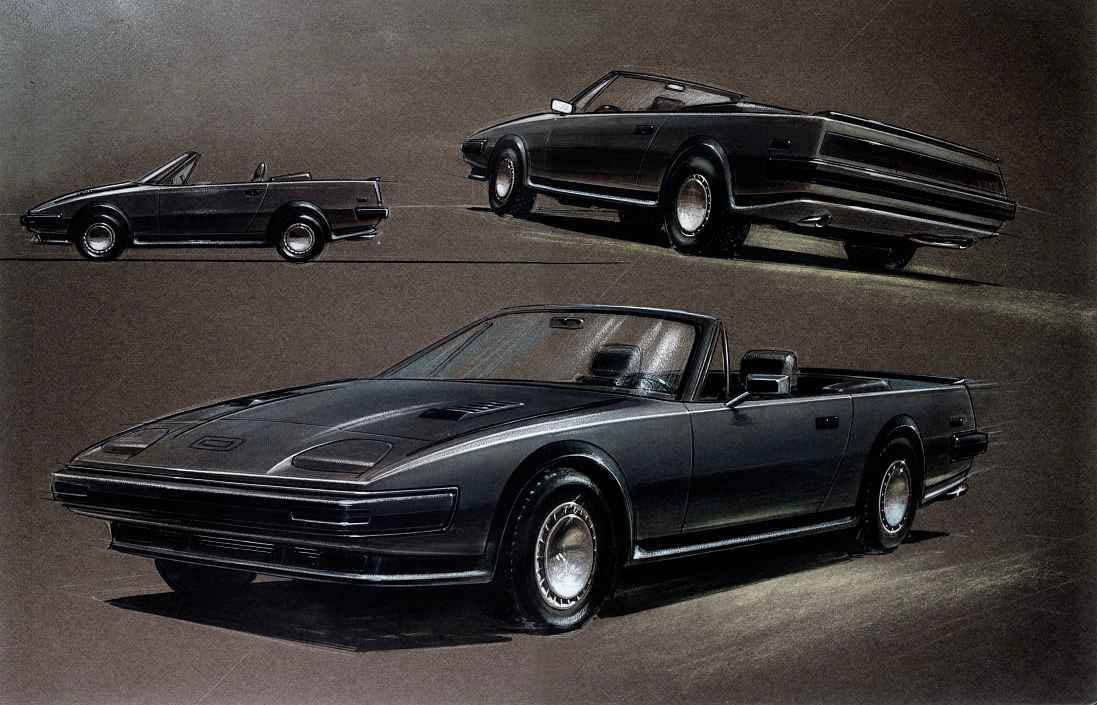 ‘The TR8 was to go alongside, with a TR7 and a right-hand-drive DeLorean for the UK market’

Clockwise from below Proud signage at factory entrance; stainless steel doors being assembled; the second round of redundancies is announced to a mass meeting in May 1982; 1000th DMC-12 about to set sail from Belfast Docks; final assembly area; new DMC-12s await transporters.

‘In the market at which it was aimed – the USA – it got a terrific reception. Plenty of orders, too’

Above, from left Giugiaro’s restyling of the original concept, a model constructed in just eight weeks by US firm Visioneering, is signed off; John Z poses with the original composite monocoque prototype with its sharper edges and slimmer sills.