Sir Alec Issigonis’ idea of what the British public wanted in a ‘supermini’ was spot on for the time and poor rust resistance was its only significant flaw. Badge engineering went mad in the wide range of models, but the public loved it.

Built in unprecedented quantity, reaching 7650 per week, ADO16 was Britain’s best-selling car from 1963 to ’66, lost out to the Mk2 Cortina in 1967, then topped the charts again from ’68 to ’71 when production was cut back on the launch of the Marina. Plagued by industrial disputes and supply issues, it could easily have sold far more than the 2 million-plus units it achieved.

An ADO16 now makes an ideal family classic: it’s comfy and deceptively spacious – kids love the all-round vision from the rear seats. Dr Alex Moulton’s brilliant Hydrolastic suspension was the secret of its success. Rubber is the springing medium, with pressurised fluid used as a transfer system interconnecting the suspension units, but it lacked effective self-levelling. Moulton also assisted in the design of the subframes, which provided the necessary rigid mountings for the displacers. Even the tyres were special, 12in wheels being rare before the ADO16.

The appealing Pininfarina skin, delivered in 1958-’59, was widened 3-4in to allow space for three adults on the back seat by the BMC design team that also created the separate marque identities. Curved side windows were another UK first, contributing to the interior space. The automatic gearbox of October 1965 was the world’s smallest and the earliest applied to a transverse engine, a brilliant four-speed unit developed by BMC and Automotive Products.

Ironically, ADO16 was sidelined by the less sophisticated Marina and Allegro, then killed off just as the supermini – which it could easily have represented with a minor redesign and a hatchback – came to popularity following the launch of the VW Golf in 1974. Australia had a 1.5-litre E-series-powered Morris Nomad based on the ADO16, with a hatchback and five-speed ’box… Rust can occur just about anywhere, even the vinyl-covered roof of a GT. It can all be repaired, but a full rebuild of a rotten car costs far in excess of its value after restoration. Even good-looking examples should be checked for bodges such as cover sills tacked over existing corroded panels. The quality of past repairs, especially underneath where all should be seam-welded, is crucial to structural integrity and long-term survival.

Early MGs were often two-tone; competition use was rare. Front drive was ideal in the snow; this is a Morris Traveller.

Look for 50psi-plus at speed from the A-series, where fitted with an oil-pressure gauge, and listen for untoward rumbles and rattles. Oil leaks, blue exhaust smoke and heavy breathing indicate a tired engine, and dirty oil is bad news. A shudder when taking up drive is likely to be worn mountings and stabiliser bushes (check by rocking the engine when not running), but it’s easy to sort.

Cooling can become marginal with a sidemounted radiator, so look for signs of overheating and water loss, and for emulsion in the oil or oil in the water indicating head-gasket failure. For once, it’s a relatively straightforward job to fix. A-series engines will need hardened valve seats once the lead residue wears off. So, if there isn’t a bill for an unleaded head, budget £200 DiY or £350 professional to get it done in due course – once power drops off due to the valve seats pocketing and clearances closing up.

There’s plenty of scope for ‘hotting up’ an ADO16 within the A-series development range. Indeed, as early as 1965, tuning specialist Speedwell offered its own 1300GT with an uprated 90bhp Mini Cooper ‘S’ power unit.

Chatter at idle on a manual ’box is not a worry, but a loud rattle from the transmission area when driving indicates a worn bearing that will soon damage the gearbox casing beyond repair. Autos are durable though not sophisticated; occasional hunting between gears is not unusual, but rough changes or reluctance to select in manual override are not good news. A good one, though, can be a pleasure in traffic and still quite lively when rowed along with the manual selector. 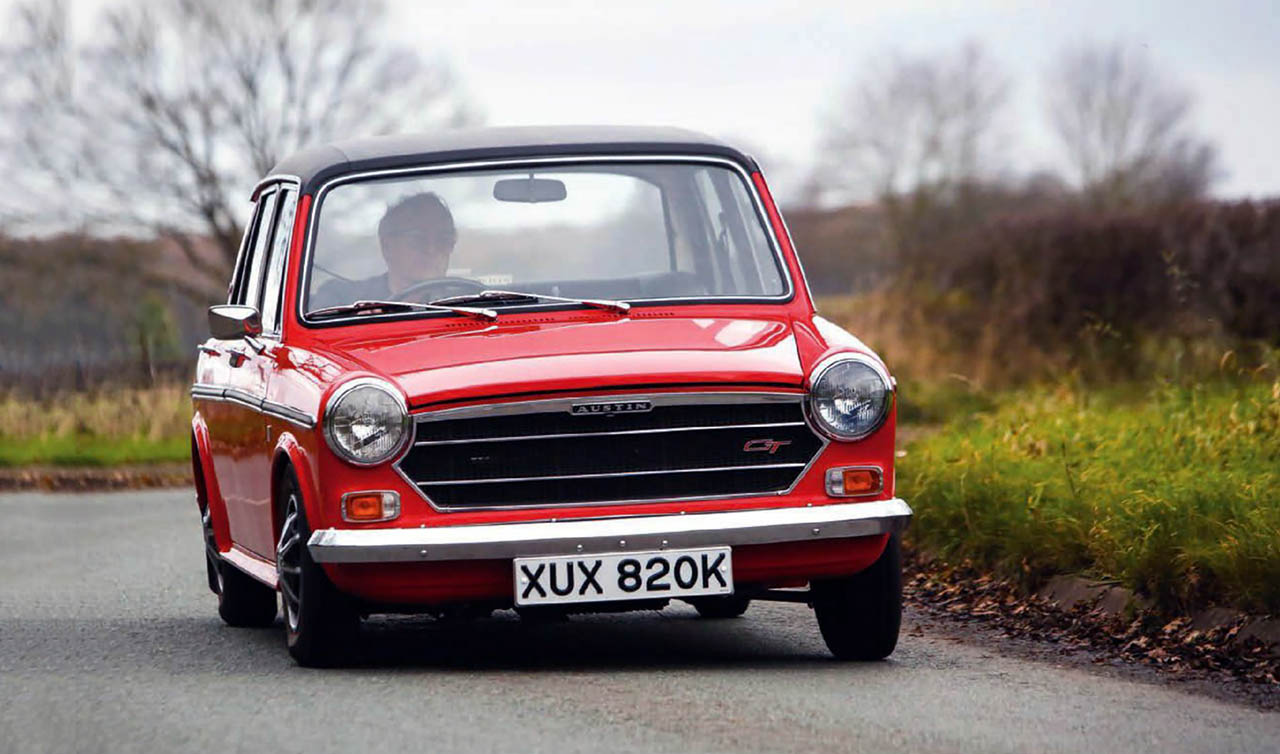 Agile ADO16 combined the Mini’s sharp handling with a more supple ride on its Hydrolastic set-up. The pressure was adjusted to lower the GT’s suspension. GT boasts a sports steering wheel and well-equipped dash.

Bayliss has a lifetime’s experience of the ADO16: “From 1966 to ’68, I worked for Austin as a foundryman, and bought my wife an MG 1300 at auction. Later, I had to sell that but my brother had a Morris 1100 that I bought cheap and put back on the road. It was comfortable and I developed a real passion for the cars. I’ve done everything to them: restored more than 20 over the past 40 years, owned about 30, been chairman and general secretary, now spares adviser, of the 1100 Club. I currently have four: this 1300GT plus a white one, a Riley Kestrel and an MG 1100. I found this Austin in a barn; it was a wreck and hadn’t been used since ’85, but it was all original. I fitted a complete boot floor, wings, flitch panels and more – and finished it five years ago after 1400 hours’ work.”

This late Mk2 Austin Super Deluxe, recently bought from Ireland where it had lived all its life, has survived extremely well. It’s been outwardly repainted in its original Limeflower Green, but there’s no apparent rot and the sills might be original. The floorpans are solid, even though the driver’s carpet and underfelt is rust-stained. The rear subframe seems to be in excellent shape and the wheelarch lips are okay. The doors fit well although the bonnet looks ajar even when shut, but they’re all like that. Its tyres are a mix of halfworn Powerstars up front, plus Dunlop SP4 and ancient Kingpin radials on the back and spare. The seat vinyl is smart bar a couple of splits on the passenger side, the headlining good and the dash basically sound with a couple of cracks, the worst on one side of the speaker grille.

Under the bonnet, the distributor water shield is still in place. The A-series’ coolant is full and a strong green colour, its oil darkish and to ‘Max’. The battery was flat, but the motor started on the first turn of the key with a jump-pack and is mechanically quiet. It drives well, with a smooth ride, nicely weighted steering with no play, plus firm, effective brakes. You can find all the gears easily, but the clutch needs pressing to the floor to engage first and the ’box appreciates a doubledeclutch down to third and second, so bleeding the system might help. This fully functional and very usable car will be sold with an MoT to April.

Austin has been resprayed but looks to be corrosion-free.

Interior tidy: even the radio and heated-rear window work!

No leaks from A-series; it has a new water pump and plugs.

All ADO16s are a delight to drive, with fun handling and eager, if not fast, performance. There’s a wide range of models to suit all tastes, the cars are exceptionally spacious inside for their compact size and make practical, family classics… provided they’ve been carefully rebuilt and adequately protected from rust, and are not missing rare trim items. 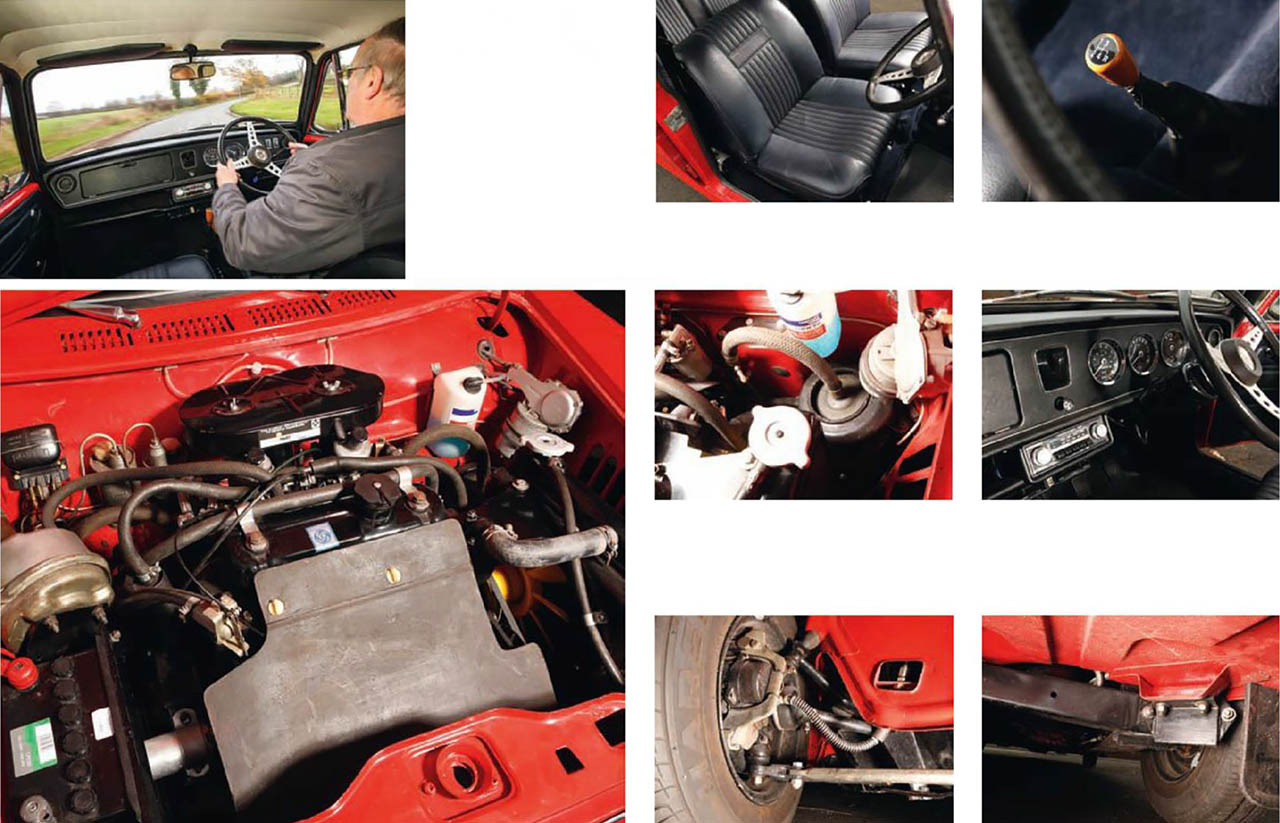 Confirm that the A-series engine fitted is the original – or at least the correct size and specification for the model – because they are easily swapped and not always for the better. Age and neglect are revealed by oil leaks, heavy breathing and overheating. Frequent oil changes help to extend transmission and engine life. Inspect the interior carefully. There isn’t a dedicated ADO16 trim supplier, so replacing lost parts means a lot of searching with no guarantee of success. Suspension can be pumped up by firms equipped to service MGF’s Hydragas; if stuck, ask club. Displacers rarely fail and secondhand ones are currently available. Surely no other car had as many layouts of dashboard and trim specs. Make sure the one fitted is correct for model and that all works. Some parts are scarce. Front discs were an advanced feature. CV joints can wear out (listen for clicking when cornering) and look above subframe for rot, especially near body mounts. Rear subframe is a mud/rust trap so check it thoroughly, also the condition of the trailing-arm bushes and ensure there are no leaks from Hydrolastic plumbing. A worn ’box usually shows up by jumping out of second. Listen also for rumbling in the lower gears. Frequent oil changes are vital for long life of transmission in sump.

9 Rear subframe and mounts under back seat