Specialising in selling luxury and classic European vehicles for over 30 years, Canadian firm Segal Motorcar Company has seen a lot of exquisite and rare machines pass through its doors. However, the company’s founder, Jeffrey Seigel, admits that none have been as special as this 1961 356 B Cabriolet.

The story of how he came to acquire this Porsche is both extraordinary and compelling. The 27-month journey that Jeff embarked on from the purchase of the car through to the restoration and now the point where it has gone up for auction with Bonhams has been fraught with emotion. The car used to belong to one of Jeffrey’s regular clients, Rick Hallissey, and Rick’s wife, Pamella. Rick was a Porsche enthusiast through and through. Tragically he passed away just over four years ago but the car and the memories that it held during the couple’s 40 years with it meant so much to Pamella that she couldn’t part with it for another two years. 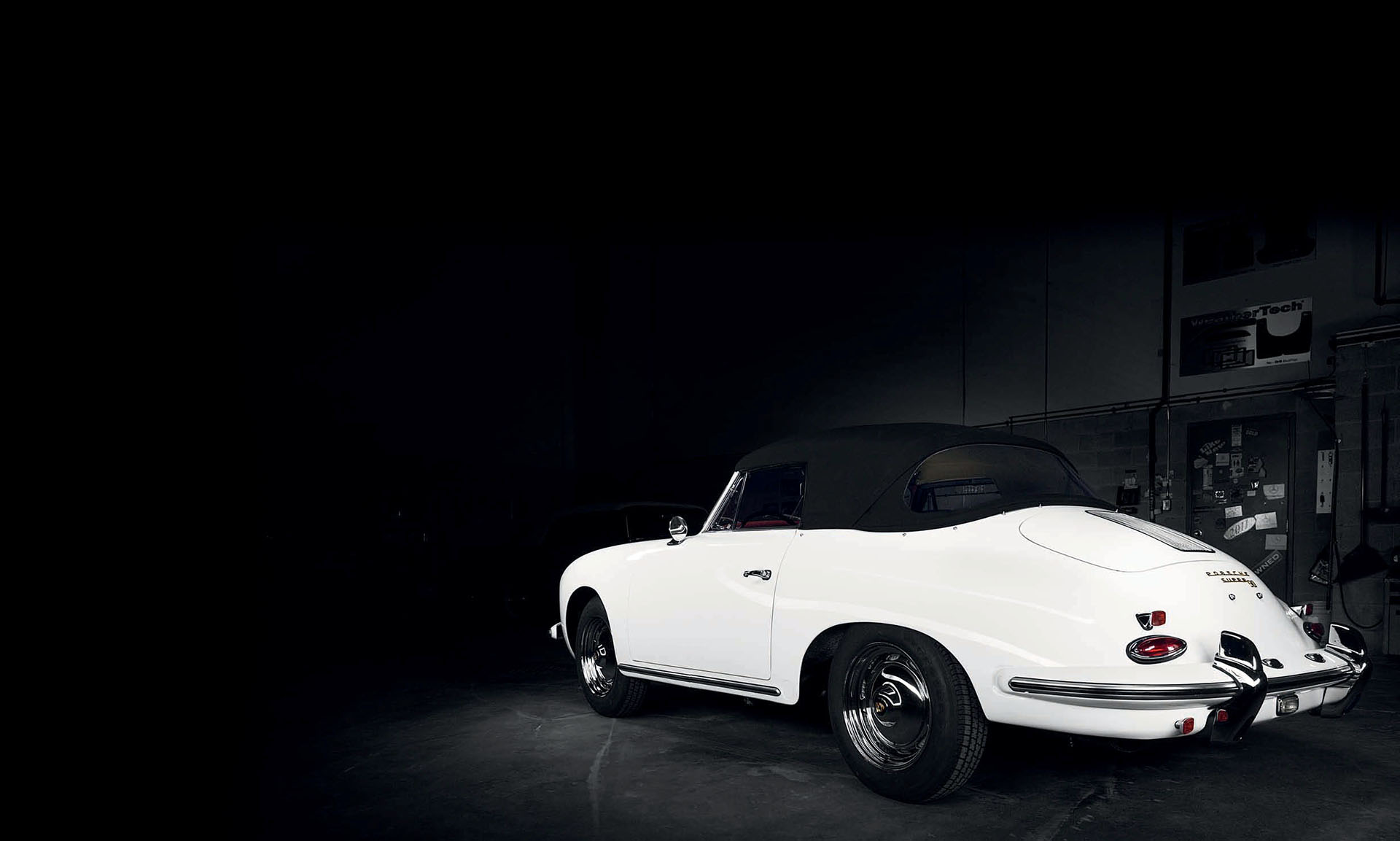 Jeff takes up the story: “When I went to see the car I couldn’t believe my eyes. Sat next to it was its twin. The Cabriolet belonged to Rick, and the Roadster D-lteren of the same year belonged to Pamella. Both vehicles had been bought within five days of one another. When I saw them together I wanted to buy the pair! Pamella is an amazing woman. At first she was reluctant to sell me the Roadster as well, so I offered her what I was going to pay for the Cabriolet plus another $20,000 on top and she finally agreed.” 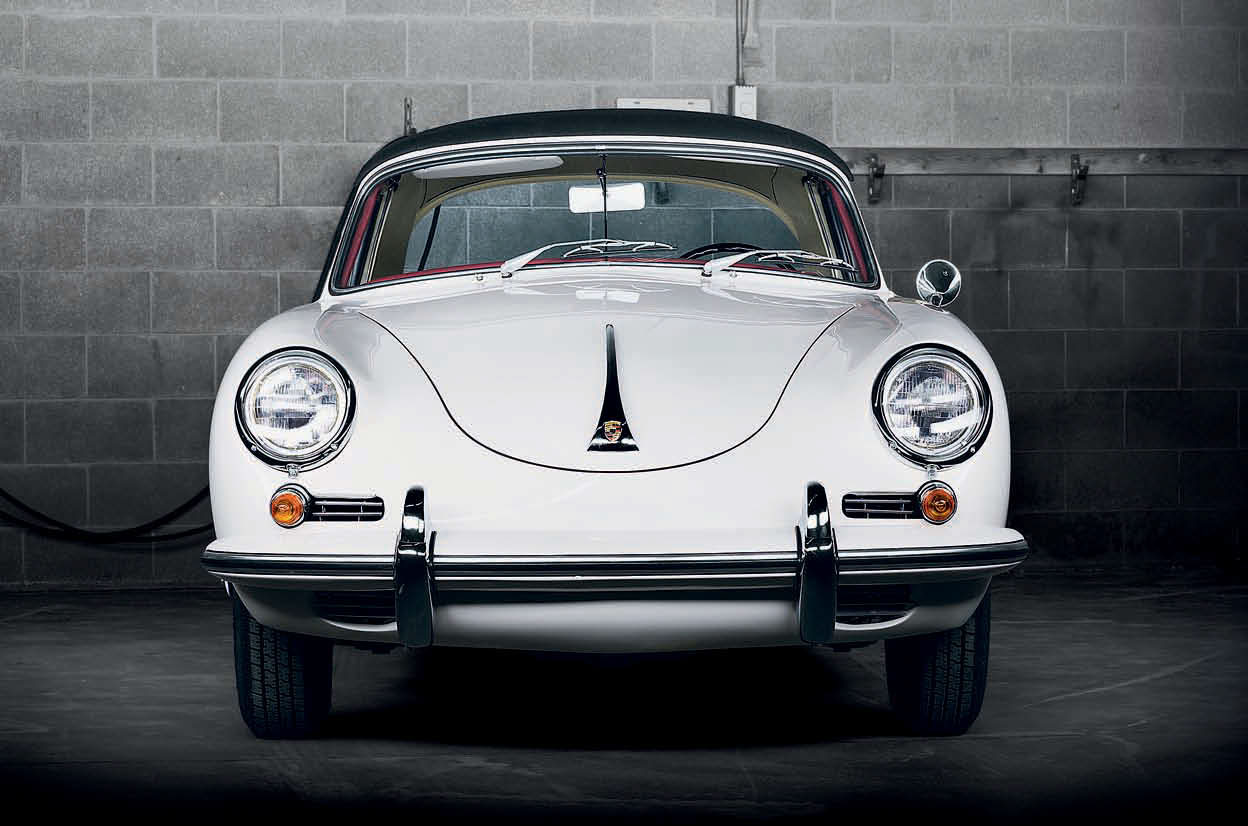 After the deal was made both cars were picked up on a flatbed and taken straight to Engineered Automotive. The company is just a few minutes from Segal Motors, and has been restoring vehicles in Toronto and Nationwide for over 20 years. Its work is second-to-none and it’s reputed to be one of the best Porsche restoration specialists in Canada. Founding partner, Billy Smilovsky, started working on engines at the age of 14 and went on to work as crew chief for Ludwig Heimrath for 20 years. Ludwig enjoyed a victorious racing career in various different series, most notably American open-wheel PPG IndyCar competing at the Indianapolis 500. He was even an official works driver for Porsche from 1961 to 1977. After enjoying a longstanding career with Porsche Motorsport Canada, Billy decided to set up his own business, and he’s never looked back since. As well as earning a top reputation for being a master technician and champion restorer, Billy is also called upon by Porsche when it needs to troubleshoot software issues.

Before the restoration began, the 356 Cabriolet was completely stripped down and every calculable component pictured and catalogued, as was every new part, together with all of the invoices. “Billy and I had to a two choices: did we want to create a nice driver’s car or turn it into a spectacular, functional piece of automotive art that was a testament to Engineered Automotive’s level of craftsmanship?” reveals Jeff. “There wasn’t much of a debate really, we had to go down the second route. Billy is humble, direct and honest – he genuinely cares about his customers but, more importantly, he is a start-to finish kind of guy who tackles all projects with perfection. We were both passionate about doing this car justice,” reveals Jeff.

Such is the case that every part on this car is OEM. “Although it essentially delayed the project by 13 months as Billy had to wait for a lot of parts, there’s not one single aftermarket component on this car. He’s a stickler for detail but it’s worth it. Aftermarket screw fasteners, for example, may look exactly the same as the OEM ones to the naked eye but after a few years of being on the car, however, the aftermarket parts would have deteriorated. There’s a difference of $7.30 per screw fastener but it’s worth it. It’s also probably part of the reason why the estimated restoration of this project went from $130,000 to $247,000,” explains Jeff. Obviously that doesn’t include the cost of the car! 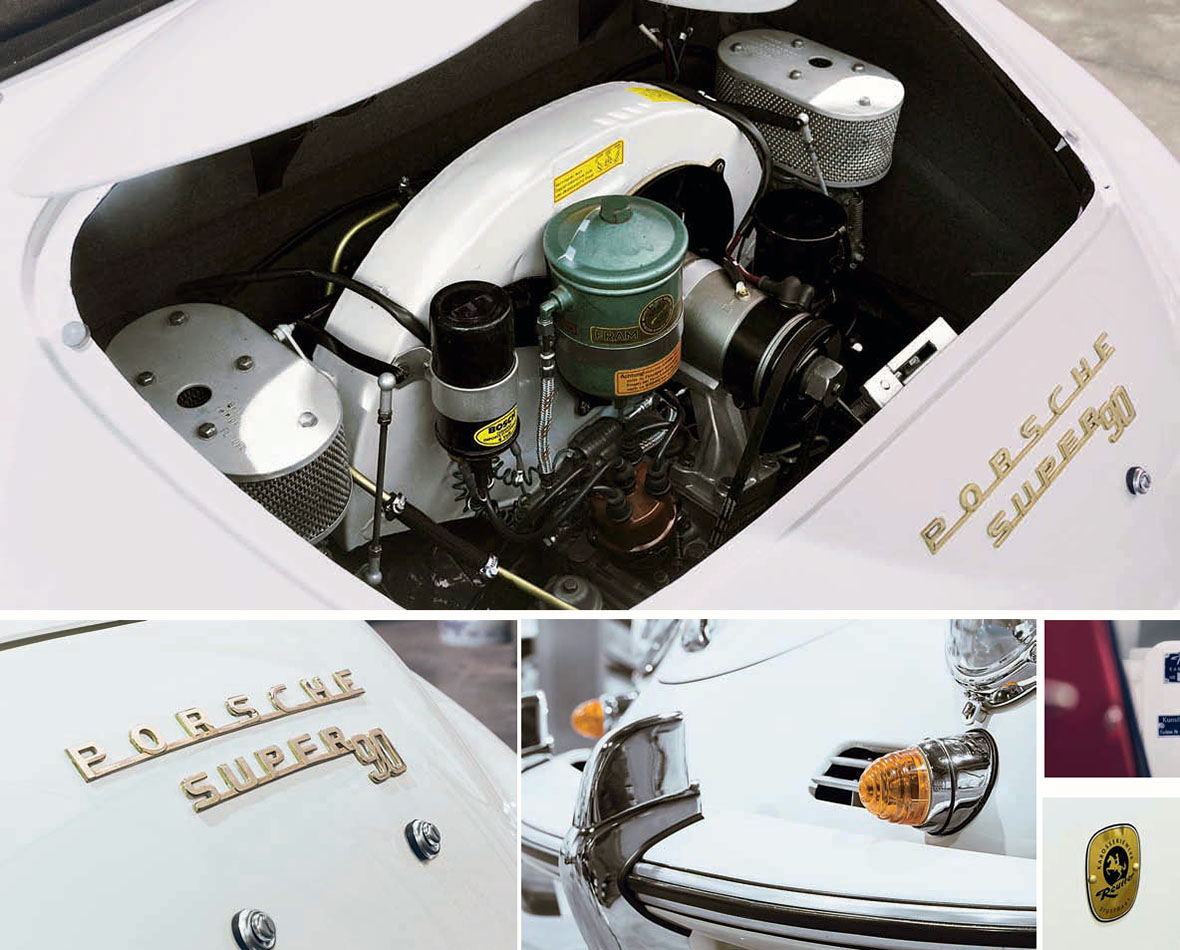 The attention to detail on this restoration is first class, with $247,000 spent in total, as you can imagine, no corners were cut.

For that sort of money you can appreciate how this is a true body-off restoration. Over 1600 hours of labour went into the build of this car and it even has a Porsche certification of authenticity, together with an affidavit from Ludwig himself who oversaw the entire project and also acts as a consultant to Billy. Jeff even went to the effort of specially creating a custom coffee table book detailing the car’s history, pedigree and provenance, featuring pictures taken throughout the entire restoration process. He’s published four copies: one for Billy; one for the lucky new owner; one for himself; and one for Pamella – who contributed to the book with the adventures that her and Rick got up to in the car over the four decades they had it. During those years the car was used during the weekends of the summer season when the couple took it to their holiday home in Muskoka, Ontario. When the car came to Jeff, in October 2012, he knew it was a good driver, as he explains: “Rick used his cars but he was also very sympathetic in the way that he used them; it never missed an annual service. He knew what he was doing and I just loved that. Jeff and Pamella were only the second owners and it was what I would call an honest car.” 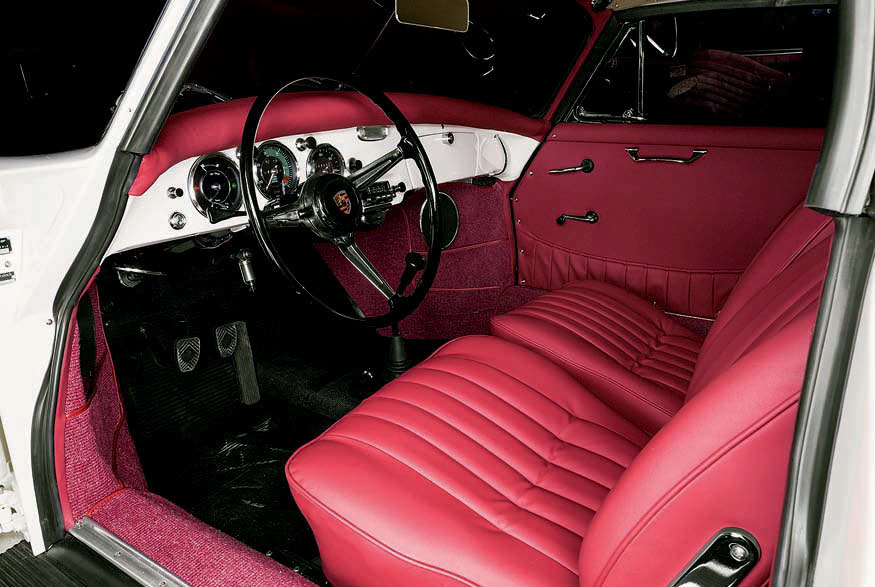 Even so, a no holds barred restoration was always on the cards for this car. Exterior-wise the entire undercarriage, all welds and trunk areas were dipped into an acid bath before being resprayed in the original Ivory white hue and the black soft-top replaced. All-new chrome, brightwork, glass, rubber mouldings and tyres were also fitted and the chrome wheels refurbished. The 90hp Super 90 engine (which only had 68,822 original miles) and matching numbers four-speed transmission have been completely rebuilt to original specification together with the coachbuilder certification plates and labels which are all in the right place.

Inside the factory-ordered hand-stitched red leather trim, fittings, gauges and carpets were replaced or refreshed so that they were the same as they would have been when the car left the factory. You’ll notice that the spare wheel is shod in a whitewall tyre but those on the car are black. We ask Jeff about it. “Billy and I stood for hours discussing whether we should have the spare wheel chromed to match the wheels on the car,” he said. “That’s when I phoned Jakob Greisen, Head of Bonhams US Motoring Department, and asked what he thought. He said that we shouldn’t do anything; Porsche deliberately used a black wheel shod in a whitewall tyre as the spare so you knew it was just that. It was the original spare wheel and tyre and so we should leave it as it was. It just shows you, even after working with a brand for 30 years, you can’t know everything!” 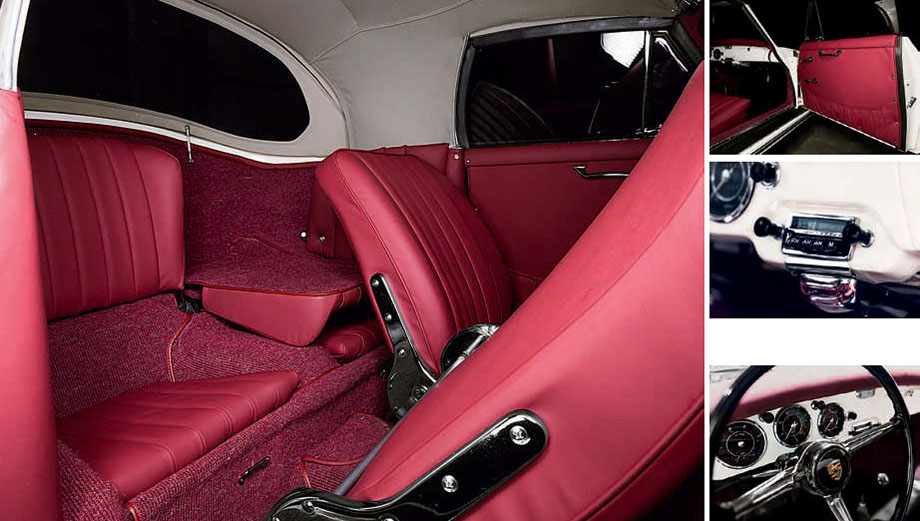 Beautiful red interior invites you inside and continues the flawless theme of this restoration.

In a nutshell, nothing has been overlooked – the car is flawless. In fact, Jeff is so confident about the standard of this car he’s let the market set the price. In other words he’s decided to sell it with no reserve when it goes under the hammer at Amelia Island.

“Over my lifetime I must have sold 7500 Porsches but this is the best example of a 356 Cabriolet I’ve ever seen,” admits Jeff. Together with his experience in the job – having started at the age of 12 cleaning floors part time for his local dealership before going on to become general manager ten years later and then starting his own business (funded by the sale of his beloved 930 Turbo) – Jeff is also a huge fan of Porsche. From his first, a 914, which to the envy of his friends he had when he was a student, to various 944s, 930s and 911s of every generation and type, he’ll never fall out of love with the Stuttgart brand. “People in Toronto have such an admiration for Porsche cars; every time I drive one people I pass smile. It’s also one of the most user-friendly cars ever built. Did you know that the number one modern car with the longest average life expectancy of 12 years is Honda? Only 10 per cent of Hondas ever made are still on the road, however. In the last 50 years, 92% of all Porsche 356 and 911 cars are still on the road. They’re just wonderful machines.”

Leaving the original spare whitewall wheel and tyre in situ was a tough decision, but it was the correct one…

So what was the most exciting part of this journey for Jeff? “Seeing the team at Engineered Automotive assembling it all back together was unforgettable. The way the guys engaged with it, and the energy, was simply amazing. I’m happy I’ve had time with the car from completion to sale, so I can process everything that happened and speak to people about it. We had a terrific response to the print advert we put out, and the online video we put on our Facebook site got almost 2000 likes within 72 hours of it being live. It’s been a long and often frustrating, journey. Visiting Billy at least five times a week for two years and three months was both exhausting and tested our relationship but we’ve come through the other side stronger. It’s been a positive end for all involved, including Pamella who was blown away by the finished result.”

This is the just the second car Jeff has ever had restored to this level. The first was a 1970 Ferrari Dino 2.6 246 GT M Series Coupé which, although sold to a valued customer, an agreement was signed that means it will be returned to Jeff when he current owner wants to sell it. He’s effectively a custodian of the car. We’ll leave the last word to Jeff: “This is one of the best cars I’ve ever sold. For now, that is. In six months the 356 Roadster will be finished. It’s one of only 472 in the world; now that is a special car.”

THANKS TO: The Hallissey family, particularly Pamella, and Billy Smilovsky and his team at Engineered Automotive (www. engineeredautomotive. com).