Sunbeam Alpine Tiger. From basket case to stunner, this restored Tiger gets its claws out. Purr-Fect Tiger. Although Rootes fan Jim Oven prefers his Tigers with a bit of bite, he was keen to add an original example to his collection and set about restoring one that was only fit for the crusher. Words Martyn Jones. Photography Gerard Hughes.

With the Sunbeam Alpine, Rootes created a sports car that offered decent performance, good handling and almost saloon car levels of comfort. But, despite achieving commercial success in the lucrative US market, mainly due to the competition success examples achieved in the hands of Stirling Moss and Jack Brabham, it was felt that a higher performance variant was needed. One that could hold its own against the Austin-Healey 3000, Corvette, Mustang, possibly the E-type and help Rootes make even greater inroads into the lucrative North American market.

Enter Ian Garrad and Carroll Shelby. Ian Garrad was Rootes’ US west coast sales director and son of Rootes competition manager Norman Garrad and had been impressed by the performance of Shelby’s Ford V8-engined Cobras, although it was Brabham who suggested installing a bigger engine in the Alpine. If engineered properly, the end result would be a lightweight, compact and fast sports car. Shelby was duly commissioned to produce the prototype and as there was nothing suitable in the Rootes range, the Ford small-block V8 was chosen. 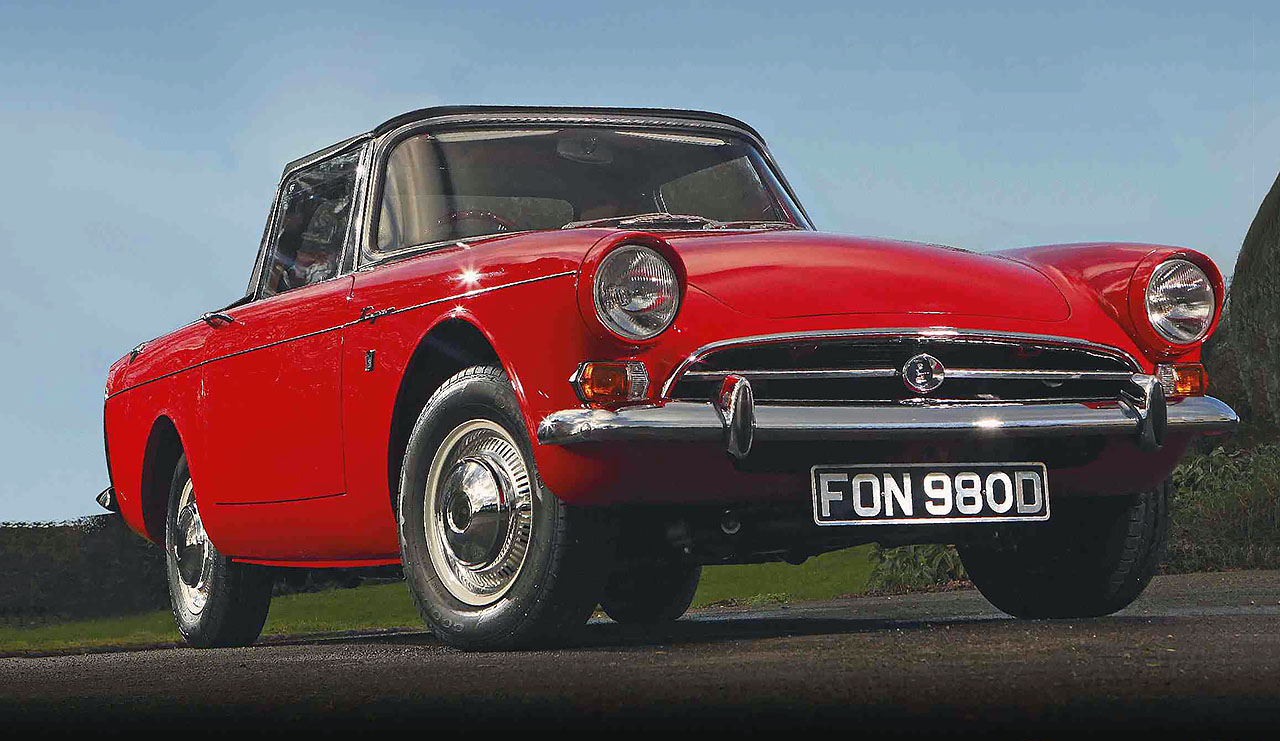 Shelby needed eight weeks to produce a car but Garrad, impatient to see if the project had legs, asked Ken Miles (Shelby’s chief engineer and test driver) to do a quick engine swap. By May 1963 Garrad had experienced the delights of the ‘Miles’ Alpine V8 and was hooked. The Shelby-built prototype had also been built and the pair were thoroughly tested at Riverside Raceway and along the US highway.

Miles had produced a quick car. Although nose-heavy, it proved to have ‘interesting’ handling. Shelby’s car however, with its V8 located as far back as possible, handled well.

One of the first to drive the Shelby car in the UK was Lord Rootes. Suitably impressed, the car that would become the Sunbeam Tiger 260 (referring to the engine’s swept volume in cubic inches) got his approval.

Launched at the New York Motor Show in April 1964, the Tiger received enthusiastic reviews. It cost little more than contemporary four-cylinder two-seaters and about $1000 less than the Cobra and Corvette (although it was around £400 more than the Healey’s UK price). The right-hand drive Tiger became available in November 1964.

It’s the intoxicating combination of lazy, lusty, V8 power and sheer good looks that first drew Jim Oven to the Alpine Tiger. Jim and his partner Marie Loxston (whose stunning Series III Alpine we featured in issue 215) are Rootes people through and through. In the past they have owned a Stiletto, a Harrington Alpine and a Series 1 Alpine. Currently, they are the proud owners of the aforementioned gold Alpine, a Series III left-hand drive Alpine that Jim’s currently restoring, a Series V Alpine and four Tigers (three on the road) including our feature car FON 980D, a 1966 Tiger 260.

Jim’s not only a serial car restorer; he’s an exceptionally talented one. Self-taught and acutely focused, he tackles each project almost single-handedly and to a concours-winning standard. To say he relishes a challenge is an understatement, as by rights FON 980D was only fit for the crusher. But Jim could see the bigger picture: “I spotted it in Classic Car Buyer. It was advertised as totally original. Originality was vital. Although I usually prefer modified Tigers, I felt that it was important to own one that was exactly as it left the factory.”

Yes, it was rotten in lots of places, but it had all of its original parts and fittings, even down to the battery screw-on tops.

FON 980D was undoubtedly original – and extremely rusty. “A previous owner had cut away any rusty areas and plated over them,” recalls Jim, grimacing. “It was a patchwork quilt!” Jim couldn’t agree on a price so he left it alone. Then a year later, club member Brian Postle asked him whether he wanted to buy FON 980D. Someone had bought it only to realise it was beyond their capabilities. Jim ended up buying it for the right money and it was trailered down to him – complete with the V8 engine on the passenger seat!

Although in need of a huge investment in terms of money and skill, Jim was happy with his purchase. “Few are as original as this,” he enthuses. “Yes, it was rotten in lots of places, but it had all of its original parts and fittings, even down to the battery screw-on tops.”

Having stripped the car to a bare shell, Jim began the restoration. “I started on the underside,” he says. “There were huge plates of metal covering the chassis cruciform. However, when I removed the plates, there wasn’t too much of the cruciform left. The outer sections had rotted away and parts of the sills had been repaired with steel box sections. It wasn’t pretty, but it was strong! What did surprise me though was that the rear of the shell was almost rust-free. Apparently, where it had been parked, the rear was under a lean-to, whereas the front end of the Tiger was exposed to the elements.” 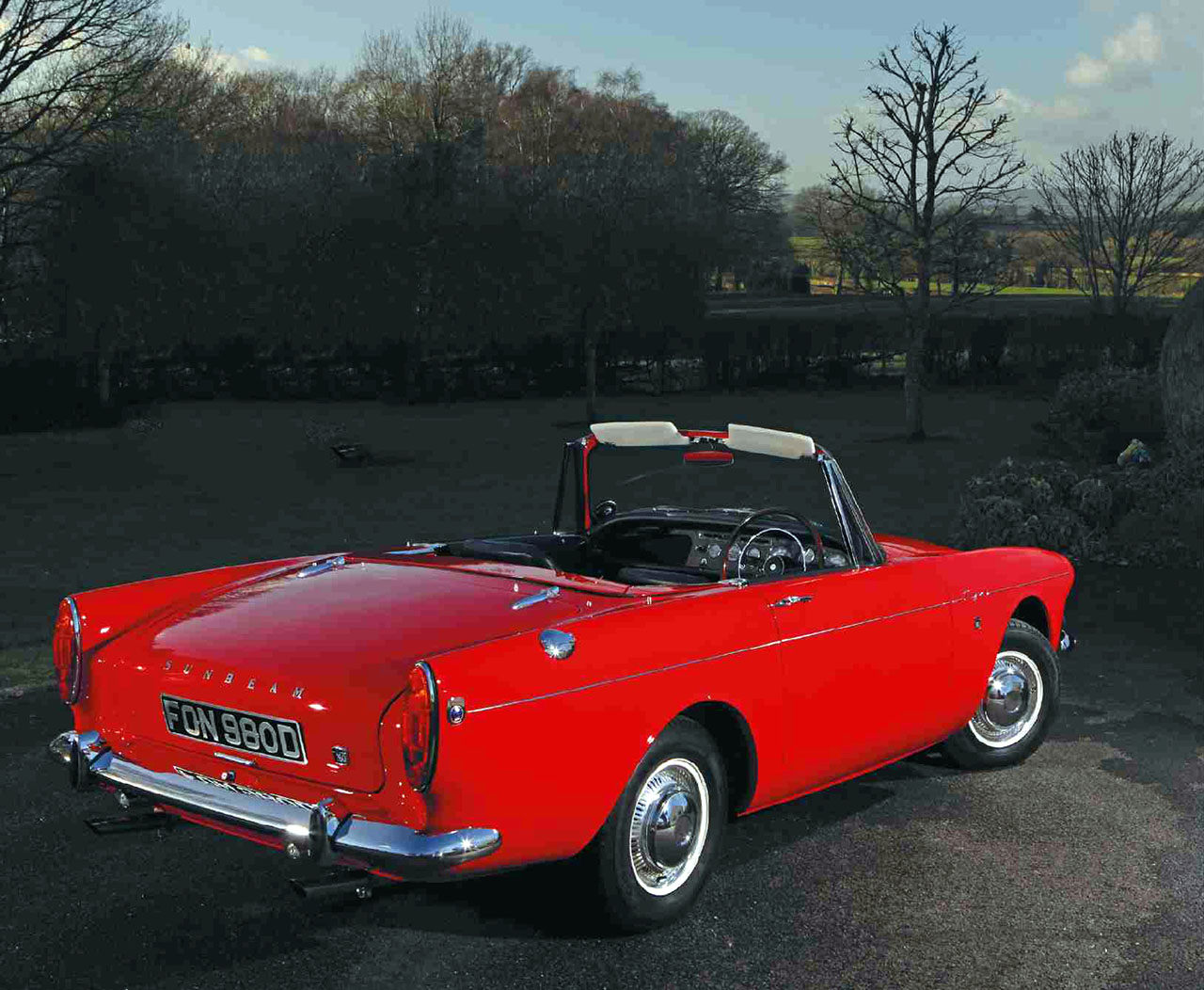 FON 980D was literally a tale of two halves – one rotten half (including the doors, A-pillars and front wings), and one reasonably sound half. But Jim set to and over a period of two years, made the shell whole. “I bought two good second-hand doors and repaired the A and B-pillars, ensuring that I kept the door lines correct. Next, I replaced the sills, inner wings and fitted second-hand Alpine front wings which I had to repair and reshape.

“After that I repaired the footwells, rear arches, grafted in a good used section into the chassis leg, re-made the jacking points, repaired the scuttle, fitted a new valance and a lot more besides,” tells Jim. Ever the perfectionist, Jim even etch-primed and resprayed the bodyshell in Carnival Red, the car’s original colour and after the underside had been coated with stonechip, that too was painted in body colour. Then once the paint was on, every cavity was injected with copious amounts of wax-based preservative to hopefully keep any corrosion at bay.

The interior is also Jim’s handiwork, although he eschewed some originality in favour of comfort, as he reveals. “I couldn’t bring myself to use vinyl on the seats as was fitted originally. So I bought leather hide in a matching grain and colour and had a professional trimmer recover the seats. I had to make an embossing tool so that the door cards would be correct. I cut the carpet to fit and had a professional bind the edges. The instruments have all been taken apart and refurbished and the horn ring is new old stock. Although I’d been saving a lot of parts to complete this restoration, the steering wheel was restored and it’s a work of art.”

Understandably, all the mechanical components including the Ford 260ci V8 were in need of a rebuild. “Whenever I needed a break from the bodywork, I tackled the mechanical rebuild,” elaborates Jim. He wanted to keep the car stock and use as many of the original parts as possible. To do this, Jim refurbished a lot of the original brake and suspension components. He also overhauled the gearbox and back axle and rebuilt the engine. The V8 is the original and was caked up solid with black oil. It was so bad, Jim didn’t think it had ever had regular oil changes. The automatic choke carburetor and cast manifolds were retained, although Jim swapped the points for electronic ignition. Some other parts have been uprated, like the hoses which are synthetic but, as far as possible, Jim went for originality. 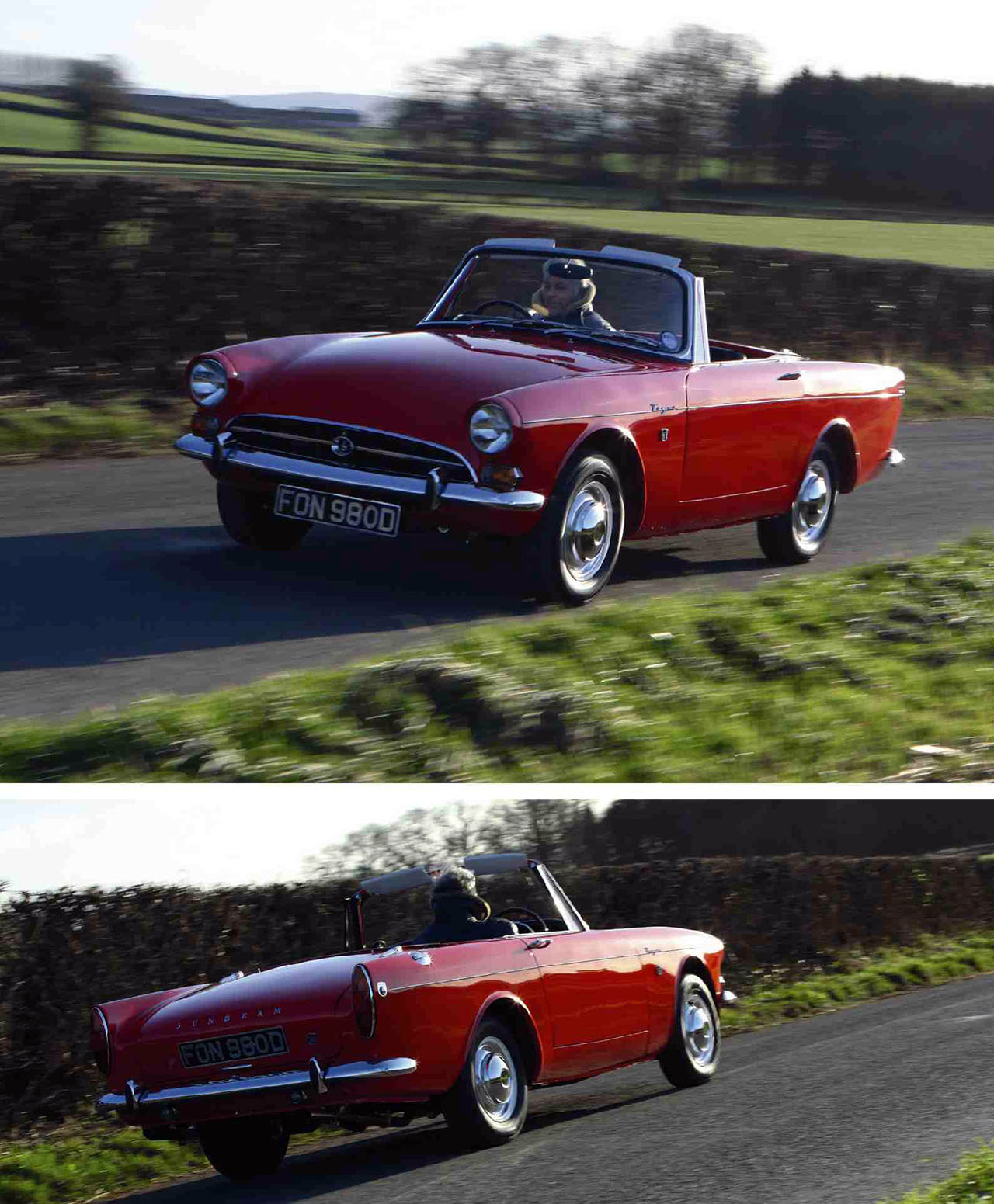 This originality even extended as far as the narrow steel wheels. Jim reckons he would have liked to fit wider wheels, especially at the rear, to help fill the arches, but stuck with the originals, although he fitted chrome embellishers to make the look even more standard.

The Ford V8 is a long-lived and easy-to-maintain engine and so too are the car’s gearbox and back axle. Rust is going to be the main cause of concern. Buy the best car you can afford and really look at its structural condition as the bodyshell is complex and full of rust traps. Has it been repaired in the past? If so, has it been done properly and have the correct panels been used? Preferably take an Alpine/ Tiger expert with you. Some of the trim and minor parts are very hard to track down.

This is a beautiful car and it has been beautifully restored. Jim is a master metalworker and the car stands as testament to his mastery. Not only that, the paint and the interior superb, the mechanicals are in tip-top condition and the finish is impeccable. Jim hasn’t simply detailed this Tiger; he’s finessed it. As far as original-specification Tigers go, FON 980D must surely be the ‘top Tiger’, the ‘best of the breed’ in fact. Pardon the pun, but this Tiger is purr-fect!

Why did you want a Tiger?

Jim: Well, it’s a Rootes car – and apart from the great styling, having a V8 engine is wonderful. It’s very tuneable too.

Jim: Most people don’t realise it’s a Tiger, and has a V8 engine – until they hear it running – and watch it fly past!

Jim: The Tiger has oodles of character. It’s also a bit of a ‘Q’ car, especially a standard one. It will potter along slowly in a high gear, but squeeze the throttle and it’s away.

Jim: To be honest, although I’m very pleased at how this one has turned out, it’s a bit too tame for me. I like our Tigers to have a bit more bite. For example, Marie’s Tiger runs a 302 block stroked to 5.6 litres and has 412 bhp, but is still very tractable.

No two doors are the same. When you’ve established that the door gaps are correct and braced the aperture, only then should you tackle the sills. When the sills have been fitted, check the door gaps again.

Set the doors 6-8mm higher. Then when the car is back on the ground, the shell settles and the door tops are usually perfectly level. 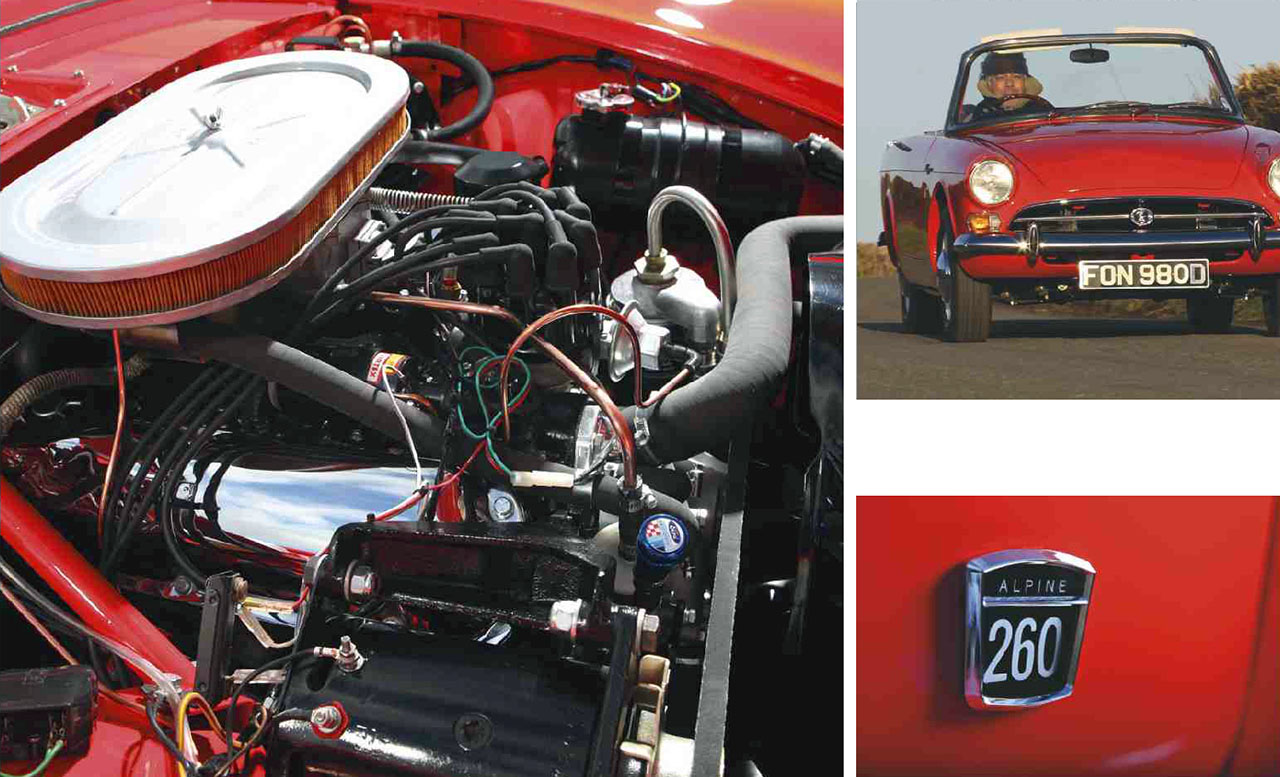 1) OCTOBER 2009 As delivered – the Tiger looks in reasonable condition but was actually in a pretty dreadful state.

2) OCTOBER 2009 The V8 had been removed and placed on the passenger seat. Not a good idea seeing how rusty the floorpans were.

3) AUGUST 2010 Repairs to the cruciform and front chassis rails.

4) JANUARY 2011 Cruciform repairs completed, along with centre crossmember and new inner sills fitted. Note the re-made aperture (one of two) that the exhaust passes through.

5) FEBRUARY 2011 New driver’s side floorpan fitted and repairs made.

7) APRIL 2011 Suspension after being cleaned, painted and rebuilt.

9) JULY 2011 Taking a ‘brake’ from the bodywork. The front callipers have been stripped, cleaned, painted and are being reassembled.

10) SEPTEMBER 2011 Nearside front wing repairs. Note how sections of new metal have been grafted in.

11) DECEMBER 2011 All that remained of the offside inner wing and chassis rail after Jim cut the rusty sections away.

13) SEPTEMBER 2013 The Ford V8 has been stripped, lightened and balanced and was refitted with a number of new components.