Despite owning a Ferrrari 308 and having sampled Lotus Esprits, various TVRs and a rather 'costly' Lamborghini Urraco, Jon’s love of fast Fords means his wishlist was entertainingly varied, from the Group B homologation special Ford RS200 to the Lamborghini Miura.

Giant restoration 1988 TVR ‘White Elephant’. The WHITE STUFF. Abandoned behind the factory, it took a particularly dedicated TVR fan to finally bring this unique prototype back from the brink. Words by Martyn Morgan-Jones. Photography by Gez Hughes.

Long-lauded as the nation’s seaside entertainment capital, Blackpool is also celebrated as the birthplace and home of TVR. Founded in 1947 by Trevor Wilkinson, TVR steadily sloughed off its modest ‘kit car’ mantle, changed hands a few times, and moved its products upmarket. Although often dogged by financial instability, TVR became the largest independent sports car manufacturer in Britain.

Regrettably, in 2006, the company plunged into another fiscal abyss, from which it couldn’t extricate itself and, over the winter of 2006/2007, TVR's manufacturing arm went into receivership. Nothing came of the 2008 relaunch and, despite much conjecture, this great British marque remains on hiatus. 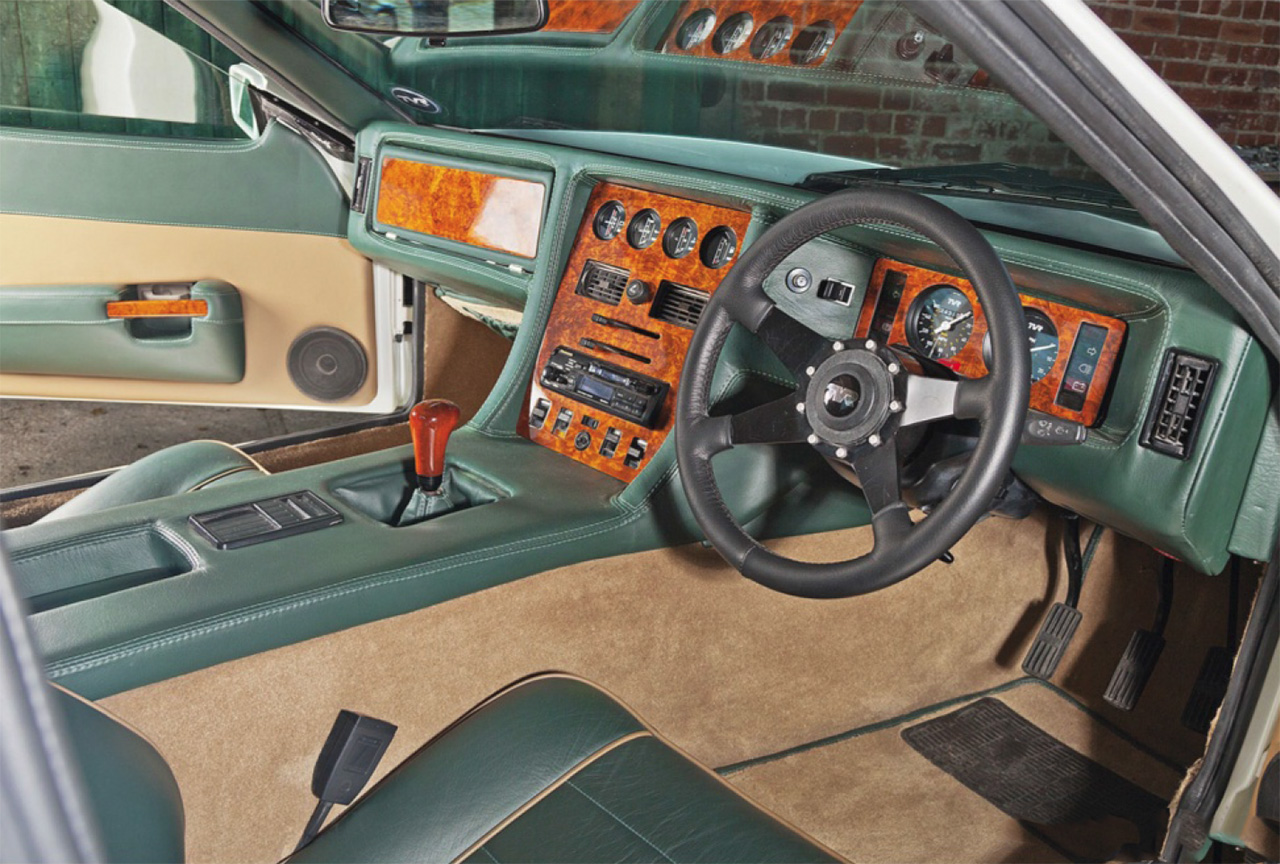 Leather-laden interior was specified by Peter Wheeler himself.

Having produced a proliferation of models, there’s a TVR to suit most pockets, including such relatively practical propositions as the Vixen, Taimar, Tasmin and Griffith. The company was also possessed of a darker side, spawning feral offspring as the Cerbera, Tuscan, T350 and Sagaris. Then there are the boundary-pushing prototypes.

In the late 1980s, TVR decided to give the Tasmin a makeover, to hopefully make it relevant for the 1990s. Cue F120 SCK. Built in 1988, it was commissioned by managing director Peter Wheeler, and used by him for two years.

Amongst only a handful of surviving prototypes, it holds the distinction of being the sole TVR powered by an Australian Holden 5-litre V8. Although thrilled with the supercar-slaying performance and chassis dynamics, the general consensus was that the revised styling, still looked dated. Supply problems with the Holden V8 were also anticipated and the project was shelved. F120 SCK, which had garnered the nickname ‘White Elephant’, was laid to rest in TVR’s ‘Graveyard’, a large gravel area home to discarded moulds, panels and other abandoned projects. Mercifully, the White Elephant not only survived many years of open-air slumber but, thanks to Howard Bryan, it’s been given a whole new lease of life. 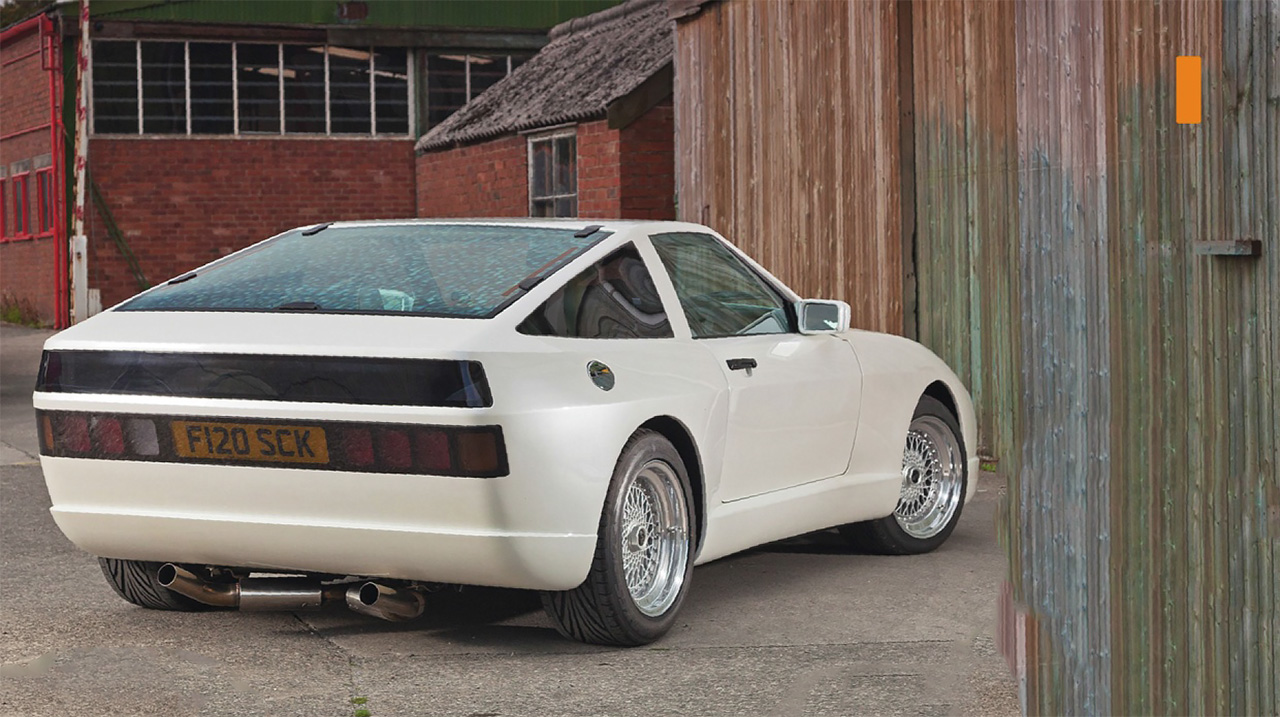 Lack of bumpers makes for a pleasingly clean appearance.

“TVRs have been a passion since I was eighteen”, admits Howard. “Nevertheless, fifteen years passed before I could afford one, a 400SE. Subsequently I developed links with the factory and learnt of the existence of the White Elephant.” Intrigued, Howard began researching the unique car. What’s more, during one of his visits, he went looking. “I wasn’t supposed to”, he confesses. “But I ventured into the Graveyard and found the White Elephant. The rear screen was missing; the carpets were under six inches of water and a tree was growing out of the boot. However, I really wanted to own this important piece of TVR history.”

Tony and I spent ages repairing and sanding the surface.

Howard asked whether he could purchase the car. But, like many before him, he was politely refused. Eventually, his persistence paid off however. “It was July 2004”, recalls Howard. “TVR was being sold to Nikolai Smolenski. This was my last chance. I contacted Peter Wheeler and put my case to him. Thankfully, my offer was accepted.”

“The basis for this prototype, designed by John Ravenscroft, is a Tasmin 350 FHC bodyshell, and a modified SEAC tubular race chassis developed by Neill Anderson”, elaborates Howard. “The nose was from another prototype, the 420 Sports Saloon, but subtly modified.

Numerous other modifications were undertaken, making the restoration something of a challenge!” A challenge indeed, starting with the removal of the body from the chassis. “That required a lot of TVRCC manpower. Fortunately, the chassis was quite sound. Nevertheless, it went to RT Racing for examination, bead blasting, repairs and powder coating. It came back better than new. The suspension bushes, bearings and links have all been replaced and higher-rated front springs fitted. The dampers are Protech, and there are new discs, calipers, and hydraulic lines. I also renewed the Rover SD1 power steering system. The alloys had suffered from the elements, and were refurbished.” 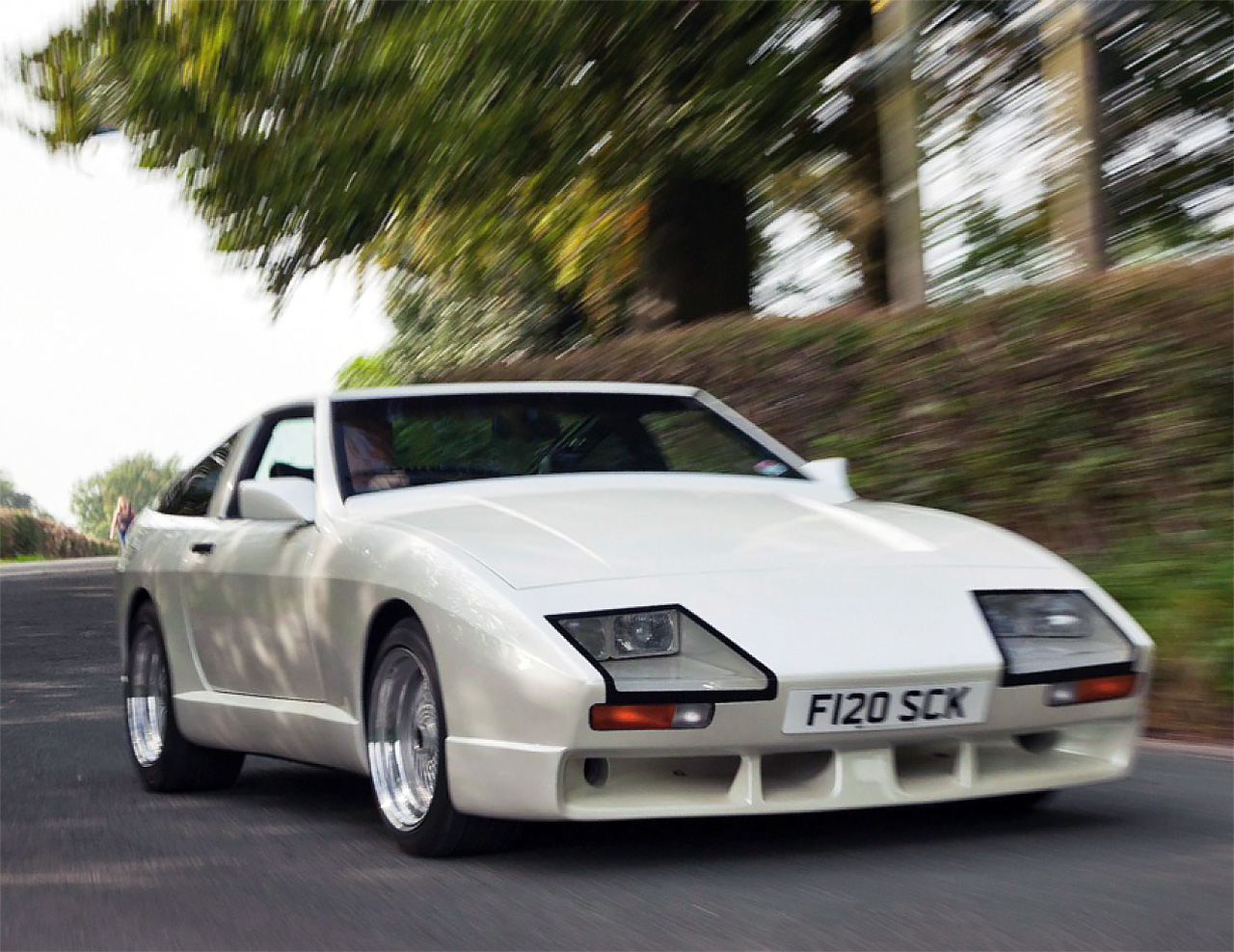 The engine, gearbox and differential also received expert attention. “The gearbox, a US-spec Borg Warner T5, and Salisbury LSD, were acid bathed, stripped, and reassembled by ATJ Transmissions”, says Howard. “After I stripped and cleaned the engine, it was rebuilt by Ric Wood Motorsport. Dyno testing revealed 440bhp @ 5000rpm and 380ft/lbs of torque. The engine was refitted by X Works Service.”

Cooling the V8 had been a problem during Peter Wheeler’s ownership, so a solution was sought, as Howard explains: “Tony Cole and I designed and trial-fitted a wooden mock-up. This was used as a template for the new, larger, more efficient radiator. Twin fans were also installed. When the new bonnet was being made, I took the opportunity to create a bigger grille section to vent the hot air.”

The bonnet redesign was just one facet of the bodyshell restoration. “For a prototype, the shell was pretty good”, mentions Howard. “Even so, after it had been washed to remove contaminants, Tony and I spent ages repairing and sanding the surface to a uniform finish. Final preparation and painting, in pearlescent white, was done by Surface and Design, who also remoulded the Perspex rear vision strip and headlamp covers from the originals. Trevor Cooper, of Surface and Design, fitted them and was of invaluable help during the rebuild.” 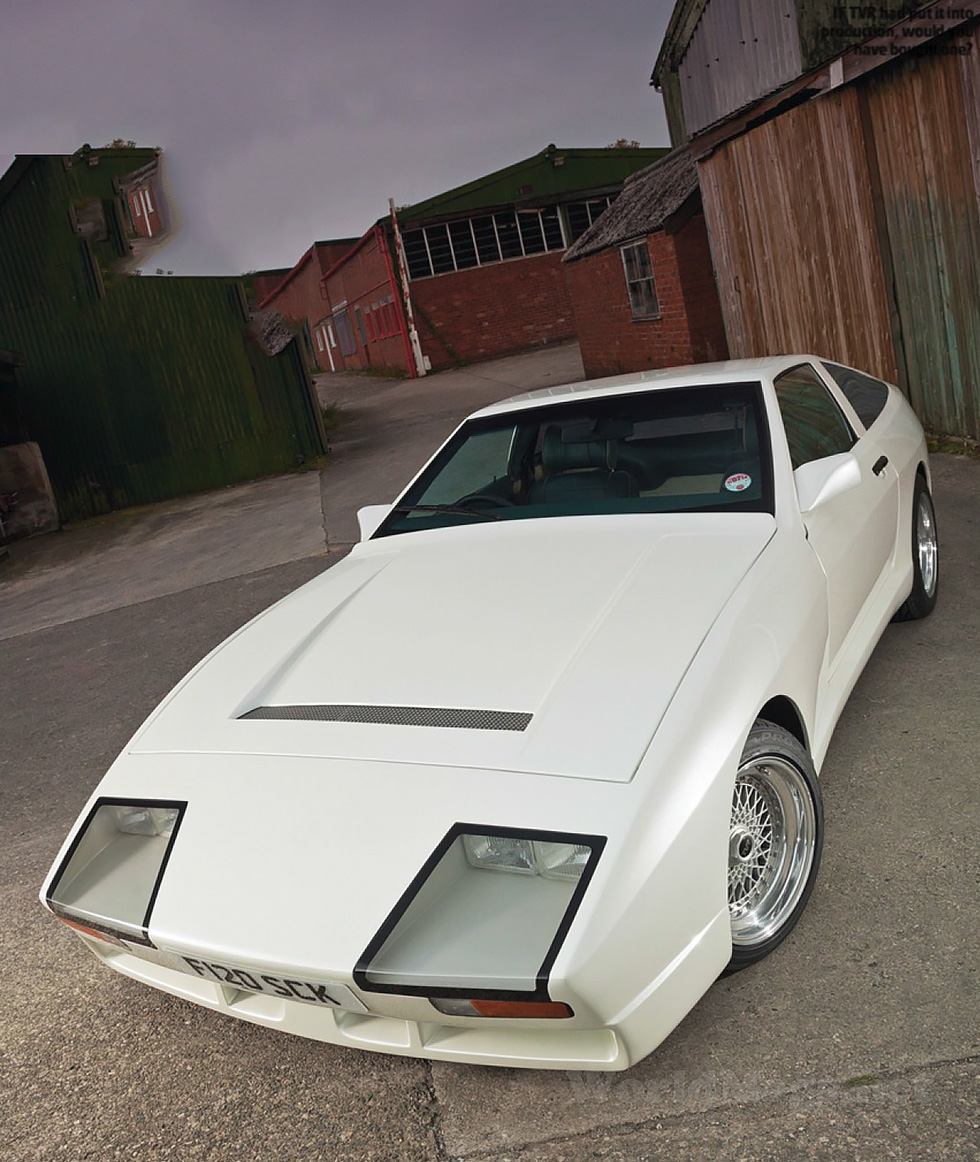 If TVR had put it into production, would you have bought one?

The flawless paintwork certainly makes the most of the car’s spectacular shape. Step inside, and the interior is its aesthetic equal. “Peter specified wheat-coloured carpets, and ocean spray and butterscotch leather seats”, remarks Howard. “He also wanted broader seats, so MG Montego Turbo seat frames were used. D & C Trim did the front re-trim, including seats, carpet, and door panels, while Lee Whitehead at Trim Unique did the rear and centre console. Obsolete TVR supplied discontinued parts such as door handles and switches.

The end result is stunning.” Originally only on the road for two years, the White Elephant passed its first ever MoT last August. “It looks wonderful and is a truly thrilling drive”, enthuses Howard. “I haven’t stopped grinning!”

Thanks to Coggins Office Furniture for the photoshoot location.

This car is worthy of many superlatives, but I’ll choose just one. Astonishing! The analytical attention to detail and sublime workmanship, make this one of the finest restorations I’ve ever seen. What makes it truly special however is that it has been a team effort. Howard has been very ‘hands on’ but, from day one, he’s utilised the services of as many ex-TVR people as possible. Together, they succeeded where the company didn’t. White Elephant? No! It was one of TVRs biggest missed opportunities.

5) MARCH 2006 Back in black. The beautifully restored chassis is back from RT Racing and ready to roll.

6) JULY 2008 The bodyshell repairs begin. Tony Cole gets busy with the DA sander.

7) SEPTEMBER 2008 Howard removes one of the larger splash moulds with a little help.

8) MAY 2009 Bodyshell being primed by Malcolm Ashworth in readiness for the pearlescent white top coat.

9) AUGUST 2011 The painted bodyshell in place and reunited with the chassis.

Why did you want this car?

“Ever since I first heard about the White Elephant, and how special it was, I was hooked on the idea of owning it.”

“It stops people in their tracks! People seem to genuinely appreciate the looks and what we have achieved.”

What was the best moment of the restoration?

“Hearing the engine for the first time. What a soundtrack!”

What was the most important thing you learnt during the restoration?

“Perseverance. There are many times a restoration makes you want to walk away. But, take a break and then come back to it with a clearer head.”