Jaguar MkX and 420G. Coventry's magnificent monster deserves to be cherished as a great classic, believes Malcolm McKay. For decades the widest production car ever made in Britain at 6ft 4in, the MkX now looks almost svelte against moderns - even the F-type is 4 1/2in broader. That fact alone deserves to spark a resurgence of interest in this forgotten Jaguar, which now offers outstanding value for money.

Sir William Lyons wanted to take America by storm, as he had done with his sports car, but he underestimated the gulf between British and US tintops of the time. In trying to bridge the gap, he almost lost both markets: the huge width of the MkX discouraged sales in Europe, but it was an anomaly across the pond where saloons with similar dimensions and better acceleration could be bought for less than half the price.

It was admired there - as Road & Track put it: ‘No other car of the size and type gives a better combination of comfort, handling and silence,’ - but it was hampered by having only a ‘six’, the engine of budget models in the States. Ironically, had the MkX been equipped with the Daimler Majestic Major’s 4.5 V8, which was tried in a prototype, it could have sold much better in the US; or better still with the V12, fitted to three MkXs for development. As it was, a third as many MkXs were sold with left-hand drive as right - a huge disappointment for Lyons. 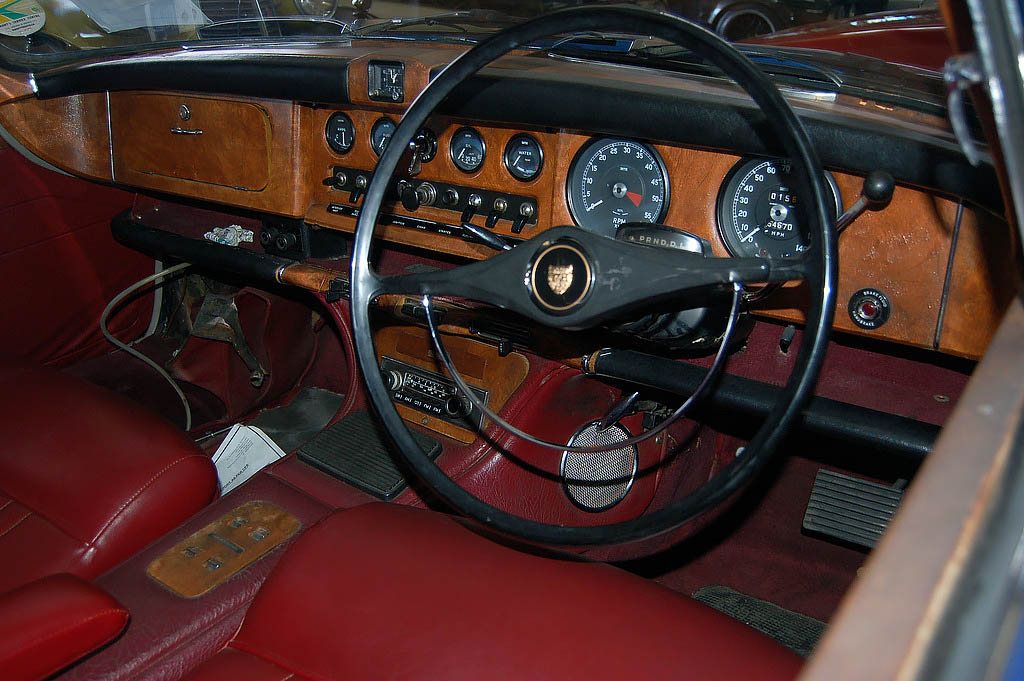 The MkX offered a blend of ride, performance and handling that was decades ahead of its time. It featured all-independent suspension, a unitary body, 14in wheels, twin 10-gallon fuel tanks in the rear wings with submerged recirculating pumps, vacuum-operated heater controls and twin heater fans, plus optional electric windows and air-con. Going to a monocoque didn’t save weight: it was 168lb heavier than the MkX. So strong was the MkX structure, though, that a dozen were modified into elegant open tourers in the late 1970s. Neglect can lead to rampant rot, but well-cared-for cars can still be found.

Although the 3.8 is sometimes described as underpowered, its manual version gave the best recorded 0-60mph time of the range, 9.1 secs, and the auto was no sluggard either at 10.8 secs. The 4.2 engine has extra torque, giving a more flexible drive and better mid-range acceleration; road testers found it more economical but little faster, although one did record a phenomenal 128.5mph top speed in a 4.2 manual. It spawned the Daimler DS420, which shared the running gear (albeit with twin carbs) in a stretched 420G platform, and was produced until 1992. ( Ful history Jaguar MkX / 420G )

A well-maintained XK engine will easily do 150,0 miles between overhauls, but neglect can halve that - and so-called rebuilt engines don’t always last as long as they should. Check that the correct ‘six’ is fitted - swaps arc not uncommon, and sometimes for lower-spec units.

Look for at least 15-20psi oil pressure at tick- over when hot (less means that the bearings are worn), and 40psi at 3000rpm. If the fuel consumption is high or the engine runs roughly, refurbishing and setting up the carburettors should work wonders. Oil leaking from the rear crank seal is a particular curse: it can be fixed, but is a major job so budget at least £1500 unless doing it yourself. Cylinder-head corrosion due to lack of inhibitor will rapidly clog the radiator, leading to overheating and potentially head-gasket failure - look for signs of boiling or leaking, and for oil and water mixing.

Automatic gearboxes can usually be rebuilt for less than £750 (plus fitting); rare manuals are durable but a worn Moss ’box isn’t much fun; the all-synchro Jaguar unit is clunkier bin stronger. Many owners fit a higher-ratio crownwheel and pinion for more relaxed motorway running, readily available from other models. Some cars have been successfully fitted with later four- speed automatics, and even V12 engines!

The ride should he excellent and not unduly wallowy, with great cornering on the limit. Worn dampers and bushes spoil the sensation but are fairly cheap to sort. Many MkXs have had their 14in wheels swapped for XJ6 15in rims, using cheaper 205/70s, though still giving a good ride.

After years of running Evos and TVRs. Clark went classic with an S1 E-type - and soon gave up IT consulting to start Lancashire Classic Jaguar Hire: “I’d always liked MkXs, so bought a 420G in 2010. There was nothing for them on the internet, so I created a forum-web-site that now has 5600 members. I also became the JEC's forum co-ordinator and started a spares company.

'Then I heard about this car: it’s the 17th from last right-hand drive and was sold new to Glaxo Holdings. It had new doors and a respray in 1984, and the previous owner had spent £9000 on an engine rebuild and other work. He said that he'd sell it to a good home, so I replaced my other one with this. I went down to the south coast and drove it all the way back with no problems!’

8 Subframe and where the radius arms mount

Trad-Brit saloon with a fabulous 4.5-litre alloy V8 that was almost embarrassingly fast for Jaguar, but couldn’t match the MkX's ride and handling. Few survive, sadly.

Less than half the price of the MkX in the USA but comparable in UK, the 500’s top-spec 427 V8 powered it to saloon-car race titles. The polar opposite of the understated Jaguar.

For 3.8 manual with overdrive, fully rebuilt in the ’90s

Against Not original colour

This rare, one-owner manual MkX was sold new lo Singapore and repatriated in 1977 (hence die S-plate), and has had in effect one owner, residing in the Sondes Fields collection since. It had £40,000 spent at Jag main dealer Paladin in the 1990s, including a change from blue and was last on the road in 2006, but it has been run regularly. More recently the steering box has been rebuilt and converted to power assistance, although the pump and piping are a little damp on the outside.

Overall its very smart, with no rot-just some microblistered paint on the bonnet and front wings that will have been attended to before sale. The brightwork is all good and the interior is superb, with unworn and nicely retrimmed leather upholstery, pristine headlining and excellent timberwork apart from a tiny crack in the glovebox-lid veneer or varnish, and the plating is wearing off the gearknob. When we saw the car the bumpers were lightly speckled, but that would easily come back to normal widi a polish.

Under the bonnet the inner wings arc perfect, the coolant is a strong blue/green in the radiator top tanks and the oil is clean and just over the ‘max’ mark. The rebuilt straight-six starts easily with no smoke or timing-chain rattles and drives well, with 40psi oil pressure showing when hot and the temperature behaving itself. The brakes are firm, but the gearshift is a little notchy into second. The Jag will be sold with a new MoT.

Fantastic value for money, MkXs arc bound to appreciate now that wide cars are common and their rarity is recognised. Buy the best you can: if you can’t find a 100%-perfect car, look for a smart body and interior first: mechanical parts are available and not hugely expensive. Quiet, comfortable, fast and practical, a good MkX or 420G is a delight to own and drive.

• The ultimate in grace, space and pace

• Mechanical parts all available and not that dear

• Good examples are well priced at present, but tread carefully when inspecting cheap ones

• There's a lot of steel to rot. and it does

• Trim parts hard to find, and may rot match

Limited-slip diff is reliable if kept full of the correct lubricant; it should not leak, clonk or whine. Oil leaks from driveshaft seals can get on to brakes.

The twin-cam XK engine is a gem if well maintained, but can suffer from oil leaks, especially the rear crankshaft seal, which is an engine-out job to rectify. Also look for signs of overheating and head-gasket failure, aluminium corrosion, rattly timing chains or cams. Earlier models had polished alloy cam covers (as on One to buy).

The brakes are powerful and fade-free; Kelsey Hayes bellows servo on 3.8s fine if properly set up. Look for rusty discs/stuck calipers: 4.2 had bigger pistons.

Inspect for balljoint wear, leaks from power steering and soggy bushes, plus rot in the crossbeam, towers and chassis legs where the suspension is mounted.

Leather-faced seats are prone to wear and sagging, although they are easily revived if not too far gone. Perforated hide was used only in the 420G.

Most MkXs were autos, with reliable and inexpensive to rebuild Borg-Warner units. Manuals had Moss then Jaguar transmissions; overdrive is desirable.

There are 43 pieces of veneered wood trim, all originally matched. A perfect set is a bonus: it wasn't that durable and second-hand pieces may not blend in.

More in this category: « Mercedes-Benz auction in Stuttgart 2014 Mercedes-Benz 300SL Roadster values sees it closing in on the Gullwing »