Under The Skin. The 959 was the most technologically advanced car of its day – so let’s take a closer look at it. Words Glen Waddington. 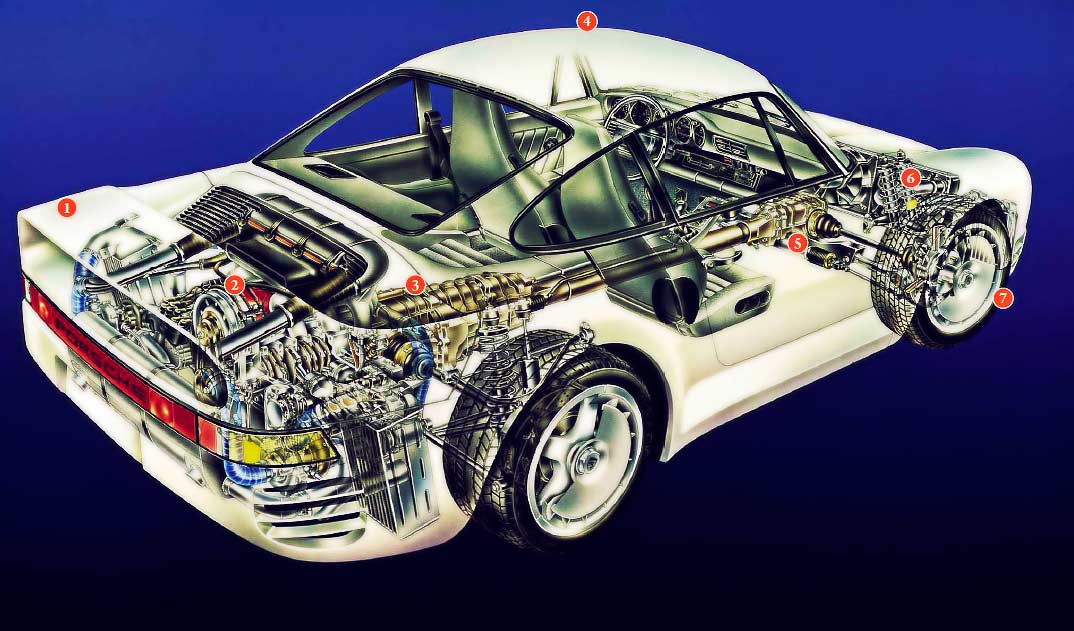 1. Tail spoiler is the result of extensive aerodynamic development that also includes a full undertray with NACA ducts for brake and gearbox cooling. Drag factor is 0.31 and there’s even a degree of downforce at speed.

3. Manual gearbox is based on the 911’s G50, except it’s housed in a magnesium alloy case and features a sixth forward ratio.

4. Although the core structure is pure 911, the outer body is a mix of ultra-strong, lightweight composite panels plus aluminium-skinned doors and front lid.

5. The 959 was the father of all the four-wheel-drive 911s that followed. Torque is transferred forward from the gearbox via a propshaft to the front differential, where clutch packs distribute the torque fed to the front wheels. A dial on the centre console applies settings for different road conditions, apportioning a maximum of 40% torque forwards – so the 959 is always predominantly rear-wheel drive. The system was hugely advanced, employing computer-controlled hydraulics. There are several ECUs around the car, so their mass isn’t concentrated in one place.

6. There are twin coil springs up-front and single coil springs at the rear, but twinned dampers all-round. Each of the paired dampers performs different functions, one being adjustable to firm-up the ride as appropriate, the other to raise and lower the ride-height, so the 959 can surmount obstacles in town yet be as stable as possible at high speed.

7. The 17in alloy wheels look tiny by today’s standards, but they feature hollow spokes to save weight. That space within the spokes shares the same air as the tyres, and there is a pressure monitoring system. That means that a drop in pressure can signify not only a tyre problem but also a crack in the wheel. The tyres are run-flats, specially developed for the 959 by Bridgestone.