In the office carpark on the Rocket 3. Moto2 for mortals Triumph's new 765 in numbers. Remember the first time you swung a leg over a motorcycle? The excitement, the thrill, oh the possibilities. Hugo Wilson relives that joy on Triumph’s new Rocket 3… Photography Jason Critchell.

IT IS BIG, IT IS CLEVER

Do you remember the first time you sat on a motorcycle as a kid? Legs dangling above the footrests, a big reach to the bars, twisting the throttle and making brum, brum noises while wearing a delighted and joyous grin.

A child’s understanding of the appeal of a motorcycle is pure. They’re blown away by glittering chrome, shiny paint, levers, buttons, dials, the promise of excitement and the understanding that this will be even more fun than their bicycle. What an incentive to get rid of the stabilisers.

The Triumph Rocket 3 recreates that sensation in adults. Not the legs dangling bit, for grown-ups it’s a short reach to the ground from the 750mm seat on the R3 GT, but the childish joy in the bike as an object, as an entertainer with extraordinary potential. Just looking at it makes you smile, sitting on it induces giggling fits, riding it provokes whooping, hollering, euphoric delight. What a thing.

All motorcycles should be fun, but some of them feel like serious fun, like you need to work at it to get the best from them, or treat them with a kind of reverence.

‘Sitting on it induces giggling fits, riding it provokes whooping. What a thing’

The monstrous Triumph is just joyously daft. It’s stuffed full of genius engineering and clever technology, but the visual appeal is as simple as a cartoon: huge engine; fat tyres; rounded fuel tank; two headlights and everything at superscale. Especially the engine.

The last Triumph that had a 2500cc engine was my school pal’s executive dad’s British Leyland built saloon car from the 1970s. It was mustard yellow and pulled a caravan to Wales every summer. Despite it having twice as many cylinders as the new motorcycle, it delivered about half the power. The Rocket 3 has got so much torque it’d make short work of hauling a six berth Happy Roamer to Prestatyn.

‘The purest form of motorcycle… made for entertainment only’

In our jaded and virus infected world it takes a lot to impress, but a 2500cc motorcycle seems to do the trick, though there might still be doubters. So for anyone grumbling about the pointlessness of all this, that you don’t need 2500cc, that it’s too heavy, that the tyres are expensive or that it won’t be very economical, I say that you are taking motorcycling way too seriously. Lighten up people.

The Rocket 3 is big and heavy, but it’s a masterpiece of packaging, packed with design details for the child in all of us. Triumph’s product development team have been clever, but they’ve also had a lot of fun creating gadgets and gizmos that demand to be poked and pointed at. The shape of the exhaust system with its pressure formed headers and three exit pipes, the fold out pillion pegs, the huge Avon Cobra tyres with snakes moulded into the rubber, the 20-spoke alloy wheels and the huge single sided swingarm, the twin round headlights (which suggest the series 2 Speed Triple), the oil filler cap and dipstick detail, the trailing axle design of the huge front forks, the massive triple clamps. It’s a Top Trumps master card made real.

The original Rocket 3, a comparatively weedy 2300cc device, was introduced in 2004, but this one is effectively all new, and much effort has been made to reduce weight and improve rideability. Fancy electronics help – there’s cornering ABS and traction control, hill-hold start assist and clever clutch design that makes its action extraordinarily light and smooth for something that’s dealing with 146.5 lb.ft of torque. That’s twice the oomph of some litre sportsbikes.

Triumph have put a massive effort into the chassis too and are proud of the fact that they’ve reduced the weight, compared with the previous behemoth, by a whopping 40 kilos. The wheelbase has been shortened and steering sharpened too, partly by use of those neat trailing axle forks. So it goes round corners better than it has any right to, but we’ll come back to that, because it’s not really what the Rocket 3 is all about.

This bike is about bracing yourself between the forward footpegs and the back of the seat, short shifting the engine into fourth gear and then, as you drift out of the 30mph zone, giving it a big handful of throttle, listening to the revs rise and the engine start to really suck. Feeling the pressure on your bum from the essential support at the back of the seat, watch the world go backwards as the numbers on the digital speedo blur. It is comically, addictively and effortlessly fast. Call me childish, but sitting in an armchair that is accelerating towards the horizon at a ridiculous speed will always be very, very entertaining.

On an open road you can wallop your way from 30 to well past 100 without troubling the gear lever. It just goes whoosh and suddenly you’re going much, much too fast. Top gear is effectively an overdrive, so you need to be in third, fourth or fifth for maximum entertainment on normal roads, and it doesn’t really enjoy being in top below 30. The gearchange is super crisp, and you can enjoy clutchless upshifts even without the optional shift assist.

We haven’t dyno or speed tested the GT, but we have subjected the R to scrutiny (see torque curve, left), so we know the numbers: 138.5mph top speed; 11.1 second standing quarters; 3.17 seconds 0-60 and 5.57 seconds 40-80. It’s only the latter that’s really impressive on paper. There’s a restrictor that limits performance in fifth and sixth gears, which accounts for the modest outright speed.

On the road the reality of the performance is more impressive than the numbers. It feels fast, but is far closer to a sportsbike in everyday conditions than on a test track with a pro-rider. You don’t have to worry about which gear you’re in, where you are changing up or what the wind direction is to achieve a good get away. Stick it in any gear and just roll the throttle according to how much you want to laugh.

It works on twisty roads too. Steering is impressively neutral, gentle bar pressure tips you into corners, it stays on line as your heels brush the tarmac and as you open up again on exit. The four piston brakes are strong and the engine braking is predictable, so you can boogie along very smoothly. It’s a hefty thing to manoeuvre at walking pace, requiring some reassuring footwork, but the weight’s really low, so it’s not intimidating.

There have been performance cruisers before (starting with the Yamaha V-Max in 1985, now available for under £3000) and there are traditionally a couple of issues with this kind of bike, apart from the way that you lose the soles of your boots in corners. Fortunately Triumph have reduced the spine jarring associated with a feet forward riding position by fitting decent quality suspension, and the combination of a low seat height and the little screen means that wind blast isn’t an issue up to 90mph. And it is only at speeds over 100 that it feels like your head’s being pulled off.

For me, that first time on a motorcycle, hoisted up and perched on top of a shiny dream machine, is a long, long time ago. I’ve owned, ridden and lusted after countless bikes since my four-year-old knees first gripped a fuel tank, but of all the bikes I’ve come into contact with since then, none have recreated that first thrill like this thing.

It’s easy to argue this is all a monstrous excess, that no-one needs a 2500cc motorcycle that weighs 320 kilos and costs £20,000. But you can also argue this is the purest form of motorcycle. One that’s made for entertainment only. I’d urge you to badger your Triumph dealer for a test ride as soon as the Coronavirus nightmare is over. 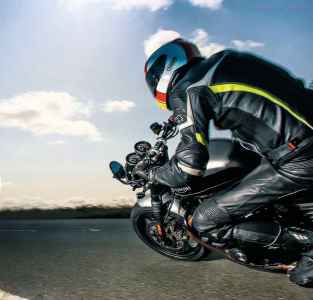 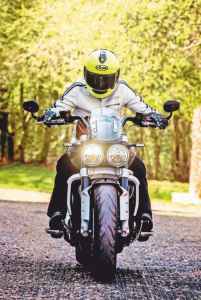 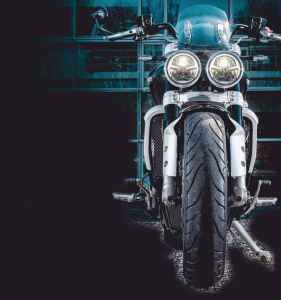 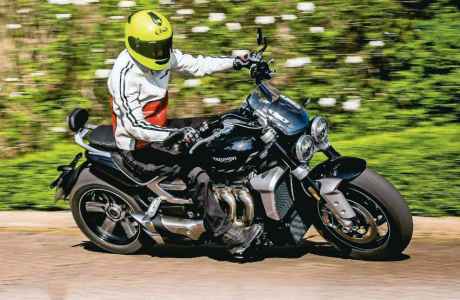 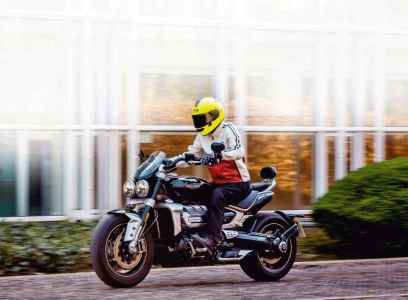 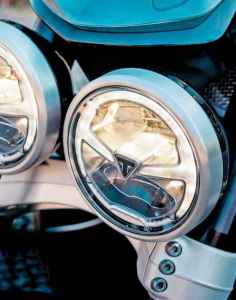 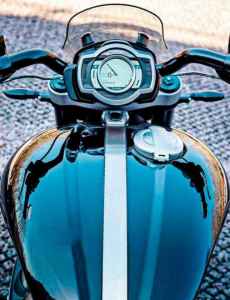 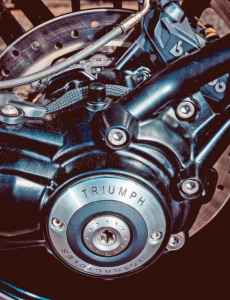 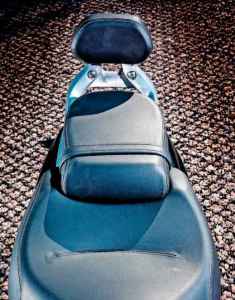 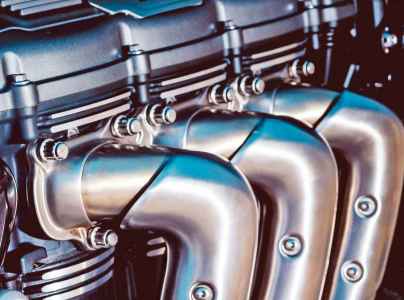 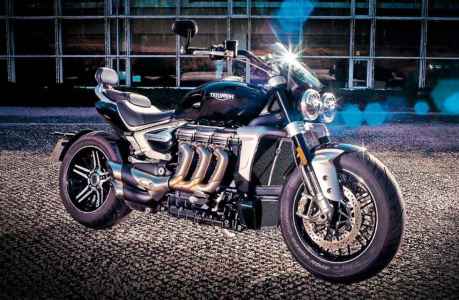 Works on twisty roads (and office carparks) too. Below: brace yourself and give it a handful. Passenger back rest to prevent unintended ejections. Yes it’s a £20,000+ motorcycle, but nowhere you look is there a dip in quality. Rocket command centre - kinda modern and kinda retro all at the same time Double round headlights bring to mind series 2 Speed Triple. Detail freaks apply here: just look at those pressure formed headers.

We love it. The Rocket 3 is as delightfully over the top as a pantomime dame, but riding it is an absolutely joyful experience. In a world of mediocrity this is a fantastic device. Sure, £20,000 is an awful lot of money, but you’ve got to spend it on something.

Now that is a meaty torque curve. 145.4bhp might not be a very impressive number from a 2.5-litre engine, but 146.5 lb.ft is definitely an impressive number for a motorcycle. With the torque graph almost level from 3000 to 5000rpm, and then peak power from 5000 to 6500rpm it doesn’t much matter where you are in the rev range, or what gear you are in, it’ll still take off. Riding the Rocket 3 is a proper blast.