A “pocket-size Tesla” is how Fiat’s boss, Olivier Francois, describes the all-new electric Fiat 500. That’s a hint not just about its perky performance but also its market positioning: the new 500 is very much pitched as a high-end choice, with elevated prices to match. But this is not out of keeping with Fiat 500 buyers, says Francois: “Around 33% of current Fiat 500 sales are high-end models like the Riva, Gucci and 500C, all priced above £20,000. The new 500 will take on this high-end mantle.”

But it’s the new 500 we’re here to talk about: an exclusively electric, all-new platform. Fiat says there will never be an internal combustion version of the new 500. Let’s start with how it looks. “If it ain’t broke, don’t fix it” is definitely the phrase here: the profile is pure 500. There are changes, though: it’s both longer and wider by 60mm, although it remains a small car at under 3.7 metres long. The wheelbase has grown by 20mm, allowing for more cabin space, while the wheels now sit further out – so although the new 500 is 20mm taller than before, it has a squatter stance which Fiat describes as “more assertive”.

The oval-shaped headlights are now split in two, giving the impression that the car has ‘eyelashes’ on the bonnet. While Fiat claims it’s “a car with a smile”, some observers see a faint scowl or even a leer in the new face. The front end has been designed to be grilleless, and therefore more aerodynamic, while the door handles are now flush, too. Look for a Fiat badge on the front and you won’t find one – it’s been replaced by a ‘500’ badge – while the rear has a ‘500e’ badge.

The new Fiat 500 is debuting in convertible form only to start, claimed to be the world’s first open-topped four-seater with zero emissions. A hatchback version will follow in July and there is also talk of a Giardiniera estate model.

The space inside is described by Fiat’s boss, Oliver Francois, as “incredible”, with shoulder room and legroom notably improved. Since the batteries are housed low down, they don’t compromise luggage capacity (which remains unchanged at 185 litres) and allow for a completely flat floor.

The cabin has far fewer buttons than before, since most of the functions are now grouped within a new 10.25-inch infotainment console, which controls music, navigation and other systems, and is compatible with Apple CarPlay and Android Auto. The air conditioning is still operated by separate buttons, though. A seven-inch digital TFT instrument display sits ahead of the driver. There’s also wi-fi on board and Alexa-style natural speech recognition.

The dashboard is wide and slender, with modular storage between the two front seats where the gear lever console used to be. Used to be? Yes: there’s no longer a gear lever at all, just ‘PRND’ buttons in the dashboard to select the gears.

The new Fiat 500 will be offered, in some trim levels, with seats made of Seaqual yarn, which is partially derived from plastic recovered from the sea, while other trim levels will use eco-leather rather than real leather. Another novelty: the 500’s key fob looks and feels like a pebble.

What about the electric powertrain? The lithium-ion batteries have a capacity of 42kWh, giving a ‘real world’ range of 199 miles (substantially better than most competitors). Fiat also says that, in mainly urban use, the range could go as high as 250 miles. Fiat hints that other battery sizes will be offered in time, with less range and a cheaper price.

The 42kWh punch should provide what Fiat describes as “rocket-like” performance for a city car: 0-31mph in 3.0 seconds and 0-62mph in 9.0 seconds – better than any electric city car rival. Fiat also says the handling will be fun because the centre of gravity is so low.

The recharging socket sits on the offside rear panel. It can be recharged via an onboard 85kW fast charger, giving the battery 30 miles’ worth of travel in only five minutes, or reach 80% charge in 35 minutes. A ‘Wallbox’ home charging system comes as standard, either 3kW or, at extra cost, 7.4kW. The latter can perform a full charge from zero in just over six hours. It can also be activated using Bluetooth.

You can select one of three driving modes. ‘Normal’ is for everyday use. ‘Sherpa’ mode saves electricity by limiting your top speed to 50mph and making the accelerator less responsive. ‘Range’ mode maximises the 500’s regenerative braking power, so you can effectively drive the car using just the accelerator pedal.

Fiat has developed a novel Acoustic Vehicle Alert System (AVAS), an acoustic warning for pedestrians (which is soon to be mandatory at speeds up to 12mph). Fiat has avoided making it sound like a fake engine but instead it plays a tune – Amarcord by Nino Rota. Other tunes can be downloaded, too.

Fiat has built a new production line in Mirafiori, Turin specifically to build up to 80,000 electric 500s per year. There will be limited availability in 2020, so Fiat is initially only offering a plush ‘Prima’ launch edition. This is a convertible only, with just 500 individually numbered cars for each country. To start, you have a choice of just three colours: Mineral Grey metallic, Ocean Green pearlescent and Celestial Blue triplelayer.

The Prima also features LED headlights, eco-leather upholstery, 17-inch diamond-cut wheels and chrome-plated inserts on the windows and side panels, as well as a ‘Fiat’ monogrammed roof and ‘1 of 500’ badging.

Since a pure electric car with a 200-mile range still doesn’t meet 100% of drivers’ needs, buyers can access ‘My Dream Garage’, a subscription service that allows you to book any other FCA Group car, be that an Alfa Romeo, Jeep, Maserati or whatever.

So how about pricing? It’s distinctly upmarket. The sole spec at launch is the 500 La Prima Convertible, priced at €37,900. That means a UK price, after the government plugin grant, of £29,500. That’s roughly on a par with the Honda e, which the Fiat also beats on range. You can make a refundable deposit of 500 euros right now to reserve yours. Full production will start in June ahead of an official launch date of 4 July – the day on which the original Fiat 500 debuted in 1957. By the way, if you’re wondering what has become of Fiat’s Centoventi EV concept, that continues to be worked on: it will morph into Fiat’s new Panda – a minimalist, budget electric car proposition, in contrast to the pricier, ‘high status’ 500. 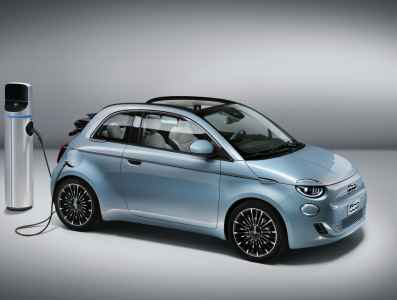 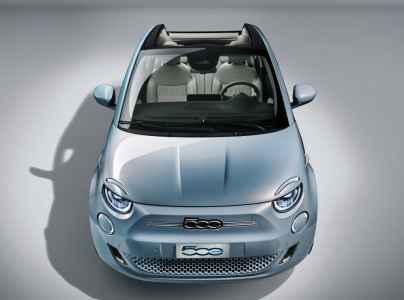 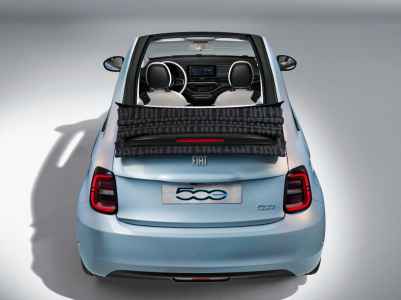 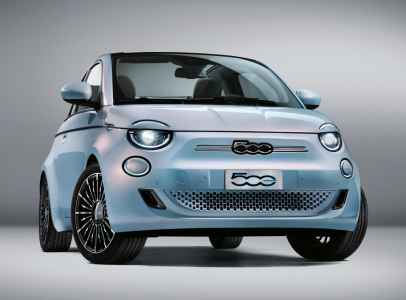 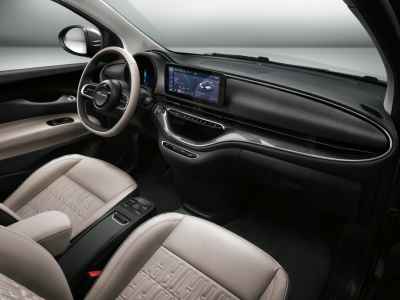 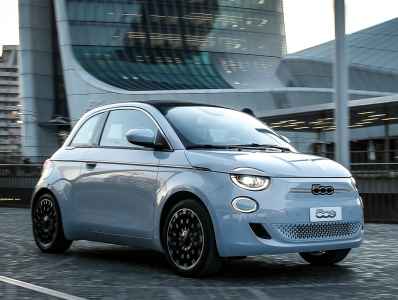 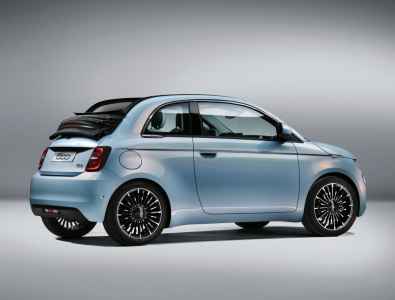 Fiat has asked three Italian luxury brands to create their own 500s, each of which will be auctioned off to benefit Leonardo Di Caprio's environmental charities. There’s the 500 Giorgio Armani (matt green paint) the B.500 Mai Troppo (‘Never Too Much’) by Bulgari (orange paint) and the 500 Kartell (blue paint). Fiat hints that such plush interpretations serve to show the direction that the 500 is heading in, as a high-end status symbol.