Suprahero. Seventeen years after the last Toyota Supra disappeared, a new model, and one of the most exciting cars of 2019, is finally here Words and photos by Jordan Katsianis.

Toyota likes making us wait. The production GT86 took nearly six years to come to fruition after the FT-86 concept was shown at the Detroit motor show in 2007. Now, in 2019, five years after the FT-1 concept first signalled a potential Supra revival, a new production Supra is finally here. Question is, will it have been worth the wait?

You may already know that Toyota paired its development for the Supra with BMW’s work for the new G29 Z4. You may also know that this Japanese coupe shares much of its mechanical hardware with the German roadster, yet this is no badge-engineered variant. It’s also no grand tourer like Supras past, but instead is Toyota’s expression of the ‘ideal sports car’.

As such, compromise has been made - but not in the way you might imagine. The new Supra promises an agile, dynamic handling balance, purposely engineered-in from the core and driven by a finely honed weight distribution, track width and wheelbase. As a result, the proportions are a little odd, the interior is cosy and the looks aren’t classically pretty. But it does promise to be one of 2019’s most exciting new cars to drive, and it might just take its established rivals by surprise.

Although many of the new Supra's components are shared with the BMW Z4 G29, Toyota is keen to point out that development between Germany and Japan was separated at a very early stage. Both cars are based on the 'CLAR' platform that already underpins the majority of BMW’s current range, but this is its most compact application to date. The Supra's overall length is 4379mm - just 139mm longer than a GT86, but a significant 236mm shorter than the A80 Supra from 1993. It's also 79mm wider than a GT86, but 28mm less tall, contributing to a squat and aggressive stance. Crucially, and perhaps unexpectedly, the wheelbase is 100mm shorter than the GT86’s.

‘CRUCIALLY, AND PERHAPS UNEXPECTEDLY, THE WHEELBASE IS 100mm SHORTER THAN THAT OF A GT86'

These dimensions are not incidental to the Supra’s development, though. They are instead a carefully wrought set of parameters that forms one of the new Supra's core engineering elements, namely a 1:1.55 ratio between the track width and the wheelbase - a 'golden ratio' according to Toyota.

The car's structure is a mixed-metal monocoque, with Toyota claiming greater rigidity than the all-carbonfibre Lexus LFA and a lower centre of gravity than for the GT86 (itself lower than a Porsche Cayman’s) - two very impressive achievements. The weight figure has been of some controversy prior to its unveiling, but officially the Supra will dip just below 1500kg, at 1495kg.

The Supra also shares the same basic suspension hardware with the BMW Z4, pairing fairly mainstream MacPherson struts up front with a five-point multi-link set-up at the rear. Most of the suspension components are constructed of cast aluminium alloy, helping to minimise non-essential mass. Fitted as standard on all models are adaptive dampers and 19-inch forged alloy wheels, wrapped in 255/35 front, and 275/45 rear Michelin Pilot Super Sport rubber. This is a pleasing contrast to the eco-focused rubber found on the GT86, and serves as strong evidence of Toyota’s focus with the new Supra. But despite the similar hardware to the Z4, the tuning is unique to the Supra. The spring rates, dampers and coil spring location are all different, and Toyota’s engineers have designed a bespoke, and extremely complex, front anti-roll bar to add an extra layer of precision to the Supra’s front axle by stabilising the front end under extreme lateral load, while also addressing brake dive.

Situated behind the front axle is a turbocharged in-line six-cylinder engine. Essentially the same B58 modular unit used in BMW’s range-topping Z4 M40i, the 2998cc motor utilises a single twin-scroll turbocharger and continuously variable valve timing. Peak power is rated at 335bhp between 5000 and 6500rpm, with 369lb ft from as low as 1600rpm, plateaued right through to 4500rpm. Although this early-arriving torque peak doesn’t bode well for a thrilling top end, peak power is produced all the way to the 6500rpm red line, so should keep the engine spinning with a decent amount of enthusiasm. In markets not obliged to comply with Europe's new 6d emissions regulations, such as the US, the BMW B58 engine can produce a more potent 382bhp - as it does in the US-spec BMW Z4 M40i - but it's unknown if Toyota will offer this higher-output motor in such markets in the Supra.

What we do know is that Toyota has no plans to introduce a manual transmission option at this stage.

Instead power is fed exclusively through a ZF eight-speed torque-converter automatic gearbox to the rear wheels via an active limited- slip differential. Keeping all this potential for momentum in check are a pair of four-piston calipers from Brembo gripping 348mm discs on the front axle, with more conservative sliding calipers and 345mm discs on the rear. With the help of the launch control system, the Suprawill accelerate from 0 to 62mph in just 4.3sec (0.3sec faster than the Z4 M40i) and on to a limited top speed of 155mph.

Being such a compact package, it comes as little surprise that the A90 Supra is a strict two-seater inside. The infotainment system and some of the switchgear is borrowed from the Z4, but is installed in a somewhat generic dash compared with the BMW’s more driver-focused offering. The design is simple and restrained, with a compact shape to maximise what limited space there is inside the car. Ahead of the driver is a predominantly digital dial pack, with most information grouped around and within a physical rev counter with a digital needle.

The steering wheel wears a Toyota badge but is in fact a new BMW item and as such has a thinner, firmer rim rather than the fat and squishy style we've become accustomed to. Behind the wheel there are bespoke metal shift paddles. The wide centre console houses the gear selector and controls for the infotainment system, but it's only the driver's side that is cowled, with a large padded section built in to save your knees during track driving. The dash is topped with an 8.8-inch display utilising a lightly fettled version of BMW’s iDrive system. High-spec models also get a head-up display.

And then there's the exterior design. Head of styling Nobuo Nakamura insists that the car was designed from its inception to be the new Supra - suggesting that the FT-1 was too. Few, if any, concept cars reach production unmolested in design terms, yet while Toyota's California- based design team may have had to make some concessions along the way, it’s impressive that so many of the proportionally extreme FT-1’s core aesthetic elements have made it through.

You certainly can’t deny that the Supra will be distinctive on the road. The proportions, as alluded to earlier, were set to create an agile and dynamic handling platform, but that also created some challenges for designers. A combination of pedestrian safety regulations and the MacPherson front suspension struts put the bonnet line significantly higher than on the concept. The bonnet therefore had to be completely redesigned, and although it still integrates the distinctive post-wheelarch vents, they’re now at a much shallower angle and have shorter openings.

The vents ahead of the rear wheelarches are also smaller and shallower, and now require a second panel to be superimposed over the top of each door's exterior pressing to create the opening. One could argue that the rear is the Supra’s best angle, and the short, pert tail does a great job translating the subtle design cues that helped define the A80 Supra’s curvaceous '90s design, while still appearing modern and aggressive.

The first new Supras will reach customers in late summer this year, available in two equipment levels, with a third ‘A90 Edition' launch model limited to 90 units in Europe. All variants have the same technical elements, with the higher- grade ‘Premium’ model adding full leather trim and a head-up display amongst other equipment upgrades. The A90 Edition features bespoke matt grey paintwork and a red leather interior, building on the Premium model’s specification.

Where does this leave us? The new Supra promises to be a game-changing sports car. Not with its hardware, or even its design, but the way the team - under the leadership of chief project engineer Tetsuya Tada - honed the entire project around driver focus at every major decision point. Our first drive in a pre-production prototype proved it already feels like it might be something special, but we’ll have to drive the finished car in the UK, and against rivals such as the Porsche Cayman and Alpine A110, to see if the new Supra lives up to our lofty expectations.

The first Supras were six-cylinder variants of the Celicas of the time, and were named ‘Celica Supra’ accordingly. Lengthened slightly to accommodate the extra pair of cylinders, early models featured a 2-litre in-line six related to that of the 2000GT, and eventually a 2.8-litre, 114bhp unit. In the later years Lotus provided some engineering input, and in return Toyota supplied components for the Excel.

The second-generation Supra was still officially a Celica Supra - or ‘Celica XX’ in Japan - and its chassis was once again Lotus-tweaked. The styling gained the characteristic wedginess (and pop-up headlights) of the '80s, particularly in flared-arched and bespoilered ‘Performance Type’ or P-Type form. European models made up to 176bhp by 1985 and were good for more than 130mph.

In 1986 the Celica prefix was dropped, but the Supra carried on as a six-cylinder rear-driver. The pop-up headlights stayed too, while a targa-top roof became an option. Turbocharging allowed the Supra to eclipse rivals such as the Nissan 300ZX Turbo, with lJZ-engined models making 272bhp, while ABS and electrically adjustable damping were available for the first time.

The pop-culture Supra. While best known in some circles as the basis for wide-bodied and CastroHiveried JGTC com petition cars or appearances in Gran Turismo, the last Supra’s impact must in part be credited to its role in The Fast and the furious. Large and heavy for the era, the A80 made up for it with, in top trim, a twin-turbo in-line six makinga nominal 272bhp, but tunable for a great deal more. 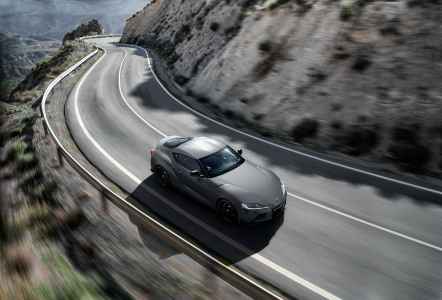 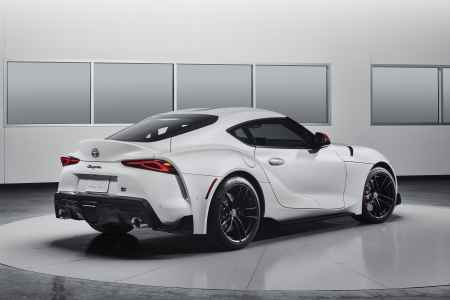 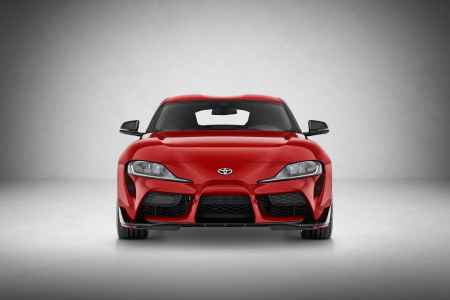 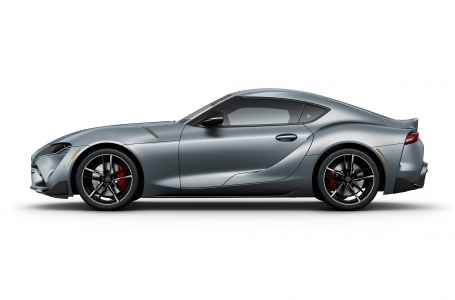 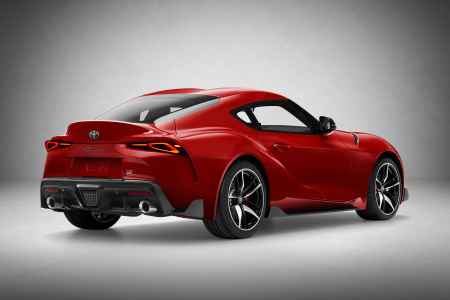 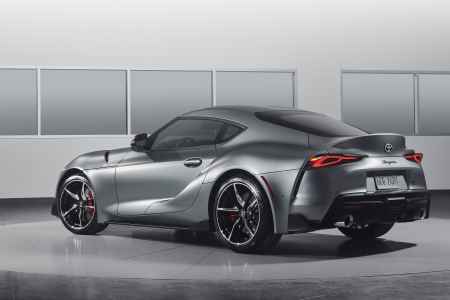 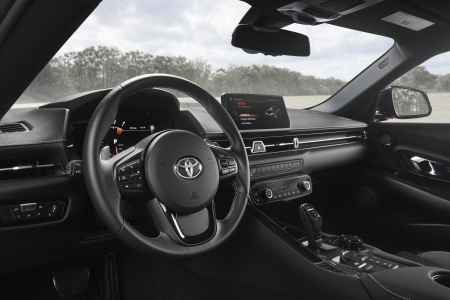 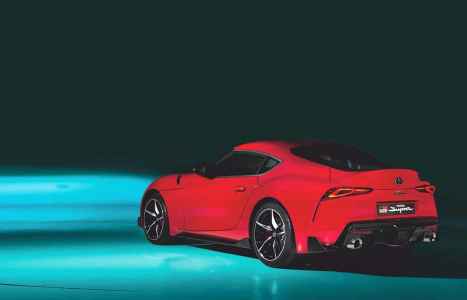 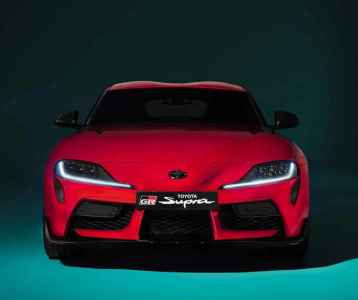 Right: BMW influence can be seen throughout the cabin, with numerous shared components. Below: new Supra is considerably shorter than the last one, now being more sports car than grand tourer. Left: compact dimensions continue inside where it is strictly a two-seater. Below: styling is an evolution of the FT-1 concept's of 2014, now being stubbier and more production-friendly.