Now it’s open. ‘The Porsche Effect captures the spirit of Porsche, showcasing its contributions to automotive engineering and the motor sports world,’ Mullin tells Drive-My. ‘It was over a year in the making.’ As well as cars, you can see historical documents and artefacts, illustrating the evolution of the marque from its engineering‐house beginnings via countless racing triumphs. Highlights on show include the 1938 Berlin-Rome Type 64 race car, a 906 racer, today’s 919 endurance racer, the Petersen Collection’s own 901 and Continental, a rare 964 X83 Turbo S Flachbau, a rally-spec Type 953 911, the world-beating Gulf- Porsche 917K, and the legendary Porsche 935 K3 Le Mans-winner belonging to Petersen vice-chairman Bruce Meyer. On exclusive loan from The Porsche Museum in Stuttgart is the 928 H50 study, a rare four-door prototype version of the 928.

You can see some of these and other Octane favourites here. If you have the chance to visit in person, The Porsche Effect exhibition runs until 27 January 2019. For details, visit www.petersen.org.

Pictured in the foreground, the Continental was conceived by New York importer Max Hoffman, who believed that the American market would embrace a car with an evocative name better than a number designation – but legal proceedings by Ford forced Porsche to re-badge it, as Ford had already trademarked ‘Continental’. Therefore few Continentals were produced – there were 228 Cabriolets – and the name was briefly changed to ‘European’, then back to 356. In the backgound is a 911 Sportomatic Targa (see later).

On loan from Automuseum Prototyp in Hamburg, Germany, the Type 64 60K10 (body design 10 for the Type 60 VW Beetle) is the progenitor of all Porsches and the foundation of the Porsche aesthetic. It was built to compete in the 1939 Berlin-Rome endurance race, which was cancelled when war broke out. Three identical cars were built, each on a Volkswagen platform with a streamlined aluminium body designed by Erwin Komenda (see Gone but not Forgotten) and crafted by Reutter. This car was reconstructed using major components from the second Type 64, which had been dismantled after World War Two.

Driven by Mark Donohue, the 1500bhp, turbocharged flat-12-powered 917-30 not only claimed the Can-Am championship but achieved a closed-course speed record of 221.120mph at Talladega. Winning all but one race in the series, the car was nicknamed ‘The Can-Am Killer’. Six were built, only three raced – 1974 rule changes saw to that.

The mid-engine 550 Spyder was the first production Porsche specially developed for racing. Wind-tunnel testing honed the Spyder’s aluminium body, which with a tubular chassis reduced weight, and the 110bhp four-cam flat-four provided race-winning performance. This particular 550 Spyder finished second in its SCCA class for the 1956 season.

This car, chassis 134, won the 1966 Grand Prix de Paris. The 906 was the second in a series of lightweight racers developed by Ferdinand Porsche’s grandson, Ferdinand Piëch, and featuring such drag-reducing elements as the rounded windscreen, Kamm tail and covered headlights. Its tubular spaceframe replaced the steel chassis of the 904, supporting a lightweight glassfibre body. One of the original Ben Pon Racing Team Holland cars, chassis 134 was raced by Gijs van Lennep, later a Porsche factory driver and Le Mans winner. 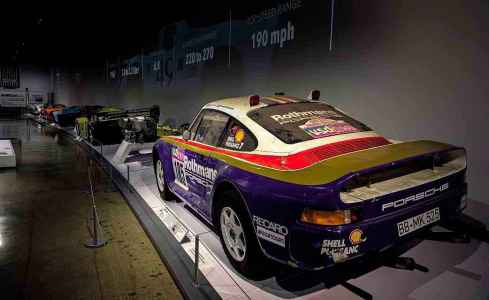 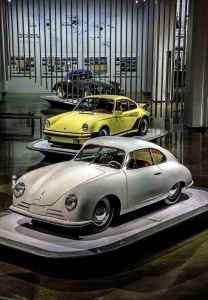 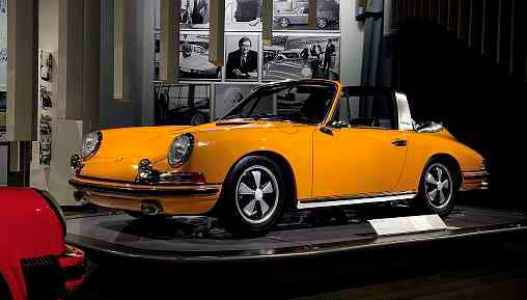 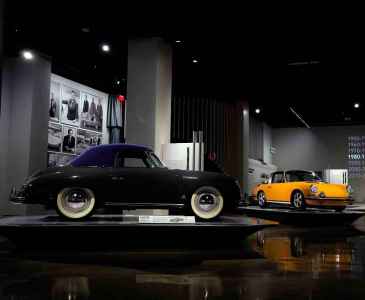 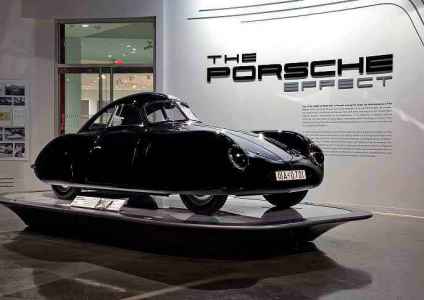 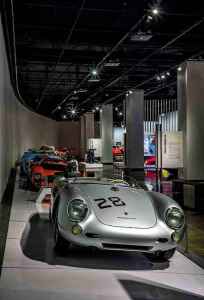 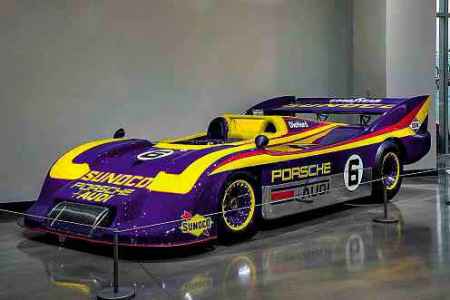 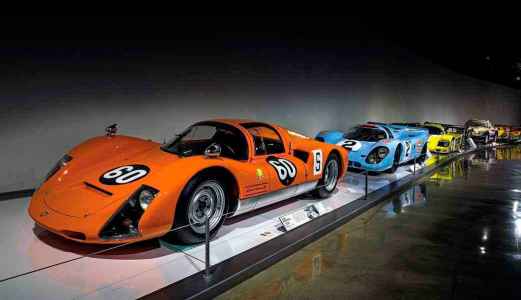 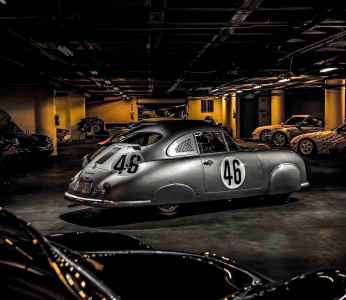 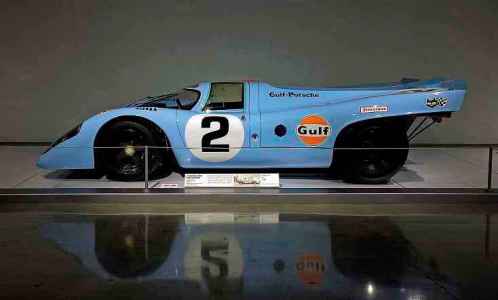 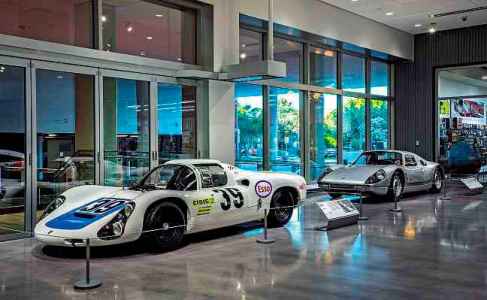 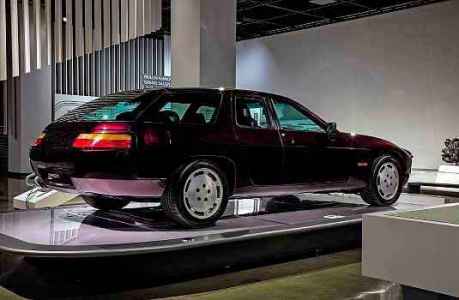 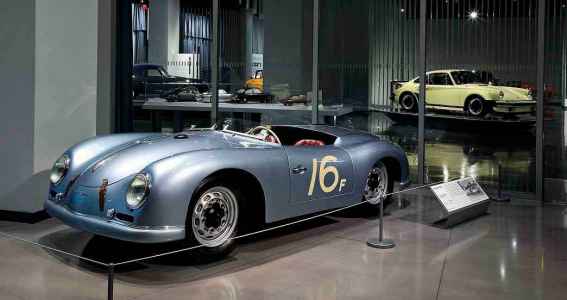 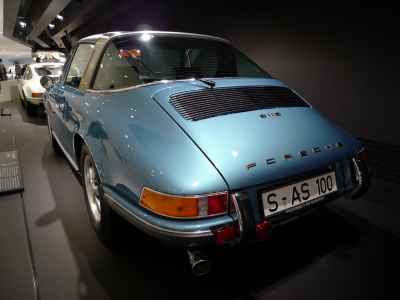 Not on show, but part of an exclusive sneak viewing in the basement, is this car, in which French drivers Auguste Veuillet and Edmond Mouche claimed victory in the 1100cc class at Le Mans in 1951, and finished an impressive 20th overall. It was the marque’s first foray onto the international motor sport stage, and the car wore a Gmünd-built aluminium body, fitted with covered wheelarches to make the most of its 45bhp. After the race, and fitted with a detuned engine, the car was exported to America by Max Hoffman and sold to Californian racer John von Neumann, who removed the roof to keep the car competitive. It has recently been restored to its Le Mans specification.

Originally built as a factory racer for the 1967 Targa Florio, this 910 won its class and finished ninth overall at Le Mans in 1969, driven by then-owner Christian Poirot. At the 1967 Nürburgring 1000km race, Porsche 910s famously finished 1-2-3-4, giving Porsche its third outright win at a major World Sportscar Championship event. Although derived from the dual-purpose 906, the 910 was a true prototype racer and the first of many to be built by Porsche.

You’re looking at a precursor to today’s Panamera. Porsche’s first front-engined ‘family car’ was a one-off 928-based concept dubbed the 942. It had full seating for four but only two doors and was presented to Ferry Porsche by his staff for his 75th birthday in 1984. Three years later, Porsche expanded on the idea with this H50 Study, with four doors. It remained a one-off.

Industrialist Heinrich Sauter and fabricator Hans Klenk worked with Porsche to build a more competitive 356 racer with a re-contoured body and a 1.5-litre engine to replace the stock 1.3. Thus modified, the Porsche won six of its seven races in 1952. Reverse-hinged doors gave the car a split-second advantage in Le Mans-style starts.

A modified 911 4x4 scored a victory in the 1984 Paris-Dakar Rally, Porsche’s first desert race. At the time, Porsche was developing a racer for the new Group B class, and used its experience with the 911 4x4 to engineer the resulting 1985 959 rally car. The technically advanced 959 featured electronically controlled four-wheel drive and an innovative sequential turbocharging system – 959s finished first, second and sixth in the 1986 Paris-Dakar.

Porsche design facilities had moved to Gmünd, Austria, in 1944. There, Ferry Porsche, engineer Karl Rabe, and body designer Erwin Komenda conceived the Type 356 using VW components. The prototype 356-1 roadster drew styling influence from the Type 64; the production 356-2 coupés and cabriolets followed, this example being the 50th and possibly the last Porsche built in Austria. Behind it is another icon: the 911 Turbo, a car that marked the rear-engined Porsche’s transition from sports car to supercar.