Even among Italians, Coriasco does not rank high on the list of household carrozzerie names. Founded by Giuseppe Coriasco in 1938, this Turin-based coachbuilder specialised in transforming Fiats, notably the Multipla, 850 and 900, into commercial vehicles.

As well as vans and trucks, Coriasco also made many passenger cars, pretty much all of them converted Fiats. Among these were sports cars and dolled-up luxury Fiats but by far the most common were practical conversions of mundane Fiats, including estate cars.

One such was the Coriasco 127 Familiare. This transformed the regular Fiat 127 into an estate, offering far greater luggage space than the saloon. Launched in 1973, it slotted in below Fiat’s own 128 estate, which had been on the market for three years by then. While priced at a similar level – 1.2 million lire – the fact that Coriasco’s 127 Familiare used the smaller and more economical 0.9-litre engine gave it appeal to budget-minded Italian families.

Sadly, Coriasco’s story is one of coming up with great ideas only for Fiat to crush them by promptly introducing very similar models of its own. Coriasco’s 127 Farm is a great case in point.

The 127 Farm was, in fact, almost the world’s very first ‘recreational vehicle’. In 1977, Matra-Simca had come up with the Rancho, a clever concoction based on a Simca 1100 van platform that melded off-road aesthetics with front-wheel drive and leisure-focused marketing. Coriasco was the first company to recognise that a gap existed for such a vehicle in the Italian market.

It duly launched the 127 Farm in 1978, just one year after the Matra Rancho. Like its French counterpart, it was based on a light commercial vehicle – in Coriasco’s case, the Fiat 127 Fiorino. Coriasco cleverly took the Fiorino and created all-new upper rear bodywork. Notably the roofline was stepped with a taller rear section; the front roof was also raised and metal rack tubework was added.

The rear body sides gained tall new windows to give the interior an airy feel. The glass was split with the lower part able to slide back and forth to provide ventilation for passengers. At the rear end was a new tailgate, or rather a split ’gate with the upper window hinged at the top and the lower section hinged at the bottom. Inside was seating for up to five passengers.

The Farm was marketed as a true multipurpose vehicle: estate car, working vehicle and holiday/leisure car. Company literature showed it was aimed at young, cost-conscious families who also wanted something fun.

The Fiorino basis was chosen because it had a higher payload than the 127 saloon (at 450kg), courtesy of uprated suspension. Power came from a standard Fiat 903cc engine. Despite its 4x4 pretensions, the 127 Farm was front-wheel drive and had no off-road tricks such as raised suspension, increased departure angles or underbody protection.

The 127 Farm anticipated not only the SUV crossover movement but also the vanbased MPV sector (Fiat Doblo and the like). So why don’t we know it better? The answer is: Fiat effectively squashed it. In 1979, Fiat launched its own crossover, the 127 Rustica – a 127 hatchback with bull bars (the subject of an Obscurati piece back). More pertinently, perhaps, Fiat also launched the 127 Fiorino Panorama in 1980, a passenger-carrying version of the Fiorino van, complete with side windows and longitudinal rear seating. Unsurprisingly, this sounded the death-knell for the Farm, which ducked swiftly out of production. Coriasco called an end to vehicle production full stop in 1991. 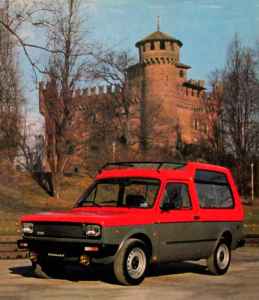 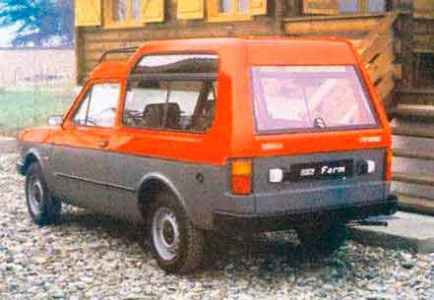