Oldsmobile Mini-Toro - This Toronado may look as though it escaped from the crusher in the nick of time, but in actual fact it was made to look this way for a very practical purpose at its home in the Lansing plant parking lot…

From here to obscurity

Richard Heseltine’s weird and wonderful American cars from the past.

By any logical rationale, this wasn’t the sort of car that manufacturers would want to promote. It was a means to an end, after all; a works hack that was built for a singular purpose that was anything but glamorous. Nevertheless, the decidedly left-field Oldsmobile Mini-Toro was well-publicised in period, with GM’s marketing department putting out a press release and photographs to the world’s media. It read: ‘Lansing, Michigan: People stare when the one-of-a-kind Mini-Toro drives by on the street here…’ And with good reason. Functional didn’t even begin to describe the appearance of this wacky device.

Built in late 1967, this stubby machine was based on a regular Toronado coupe. Autocar wrote in February of the following year: “Oldsmobile has built [it] to help extract employees’ cars from the snow-clogged plant parking lots in these rough Michigan winters. The superior traction, with the engine over the driving wheels, is just the ticket here.” It was, too, even if the car’s uncompromising looks defied belief. For starters, 889mm (35in) were removed from the overall length of the standard model, with 457mm (18in) being lifted from the wheelbase alone. This was done in order to reduce the turning radius and improve manoeuvrability in tight spaces. After all the cutting and shutting had been done, it was 4038mm (159in) long, which rendered it three-quarters the size of a regular Toronado.

Altered proportions aside, the most obvious deviation from the script concerned the front and rear bumpers. They were made of 76mm (3in) maple wood capped in resilient black dyed rubber. They each weighed 68kg (150lb) and were perfect for pushing cars through snow from either end, and in each direction, although the Mini-Toro was also equipped with studded tyres for extra bite. The goodies didn’t end there, either. Should an employee’s car have a flat battery, it was of little consequence. The Mini-Toro was conveniently equipped with a plug for jumper cables sited inside a hatch sunk into the left-hand side front wing. Other features included a filament-heated rear window, heavy-duty radiator and fan, dual batteries and alternator, and bottles of compressed air; not the sort of thing you would expect to find on a regular Oldsmobile.

Autocar went on to add: “You have to see this crazy car operate in snow to believe it!” before adding: “It looked like it could go anywhere.”

Having 7.5 litres of Detroit V8 firepower no doubt helped. Intriguingly, if implausibly, it also retained the donor car’s chrome hubcaps… ‘The Pusher’, as it was also known, remained in use at the factory each winter until 1972. Contrary to what you might expect, it wasn’t scrapped subsequently, either. Instead, it reappeared as a parade vehicle before being mothballed. It later went on display in the R. E. Olds Museum in Lansing, Michigan, which opened in 1977. As an aside, Oldsmobile also built a four-door Toronado prototype using a standard wheelbase donor car. Intriguingly, it was also pressed into service at the Lansing factory with a snowplough attached… 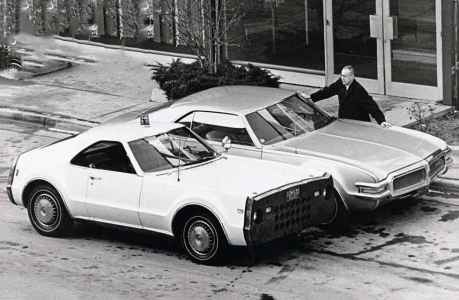 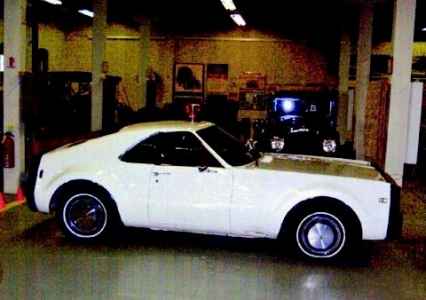 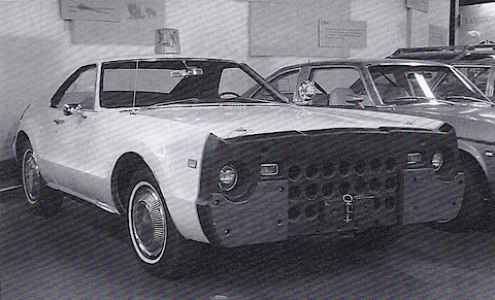 Yoo will think 1968 Oldsmobile Mini-Toronado deceiving. They didn’t take a whole lot off the front. Together with taking out the middle and rear sections it added up, and lost a lot of passenger and cargo space in the process. They then parked it further back making the front look shorter in comparison than it actually is.

There is a photo of this car in James Flammang’s Cars of the Sensational 70’s. His series makes for some of the best coffee table books. But, for some reason, that rubberized front end reminds me of a “car muzzle,” if such a thing ever existed.

The real one may have wasted space and extra weight, but it has real style. I have always been attracted to cars that were at least a little bit excessive, just for style. I especially love long hoods, whether they are necessary or not. The Mark V probably had more wasted space and excess weight than any other car ever made. But it was beautiful. The aerodynamics of the cut up car must be terrible. But what is really shocking is that it looks as good or better than most anything you can find new today. That grille reminds me of the new Toyota Yaris.

Arti Smarti
There are no comments posted here yet