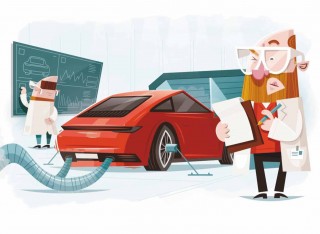 With stricter testing for economy and emissions now in force, Drive-My explains the meaning of WLTP and how it affects the iconic Neunelfer. Illustration by Martin Bowyer.

Air quality and vehicle emissions are under scrutiny like never before and, as legislation becomes ever tougher, car makers are under pressure to meet strict new testing standards. That includes Porsche, and a look at the economy and CO2 emissions of the 992 models announced so far reveal some notable differences. The last iteration of the 991 Carrera S Coupe equipped with a PDK gearbox claimed official figures of 36.7mpg and 174g/km; those same numbers for the 992 are 31.7mpg and 205g/km. And things are much the same for the Carrera 4S, changing from 35.8mpg and 180g/km to 31.4mpg and 206g/km respectively.

So what’s responsible for these revised numbers? First, it’s worth pointing out that the figures between generations aren’t actually comparable – new testing regime aside, those 992s are more powerful than before, with 450hp instead of 420hp, and feature an eight-speed PDK transmission and new tech such as a gasoline particulate filter. And while we are used to seeing economy and emissions improving as new iterations are launched, neither has it really worsened compared to before. Instead what we are seeing are figures that are simply more representative of what the car achieves, and that’s down to the much stricter Worldwide Harmonised Light Vehicle Test Procedure, or WLTP.

Prior to September 2017 when the new test began to roll out, cars were assessed using the New European Driving Cycle (NEDC), a laboratory-based test that was increasingly seen as irrelevant and no longer fit for purpose. Limited in scope and too easy for manufacturers to optimise their cars for the specific nature of the test, wholesale changes were needed – the result was WLTP.

In essence, WLTP has introduced a much tougher assessment with a longer test time and distance – from 6.8 to 14.5 miles – and higher speeds, as well as incorporating a greater number of more detailed test cycles. It also assesses the impact of different models within a range, including those fitted with optional equipment. And there’s a further aspect to the new regime: RDE. The Real Driving Emissions test sees the car fitted with portable measuring equipment to monitor CO2 and NOx (oxides of Nitrogen) and then driven over a varied route incorporating different altitudes and speeds. Implemented from September 2019, the further phases due in January 2020 and 2021 will be tougher.

The simple and easily manipulated NEDC lab test has been replaced by something that should give us a more realistic idea of how much fuel Neunelfers are using and what they are emitting from their tailpipes, and that’s a good thing. Things will only get tougher, but we’re confident Porsche’s engineering will be up to the challenge.