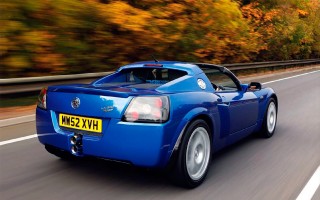 Developed alongside the Lotus Elise S2 but with many different parts, the VX220 was a thoroughly sorted sports car. Longer, wider, more flexible and forgiving than an Elise, it was every bit as much fun.

The bonded, extruded-aluminium chassis weighed just 68kg, contributing to a weight of well under a tonne. Mid-range punch was its strongest suit, the 2.2 engine far more flexible than the smaller, more highly strung units in the Elise. Testers raved about its impressive handling, brakes and steering, especially considering its controlled, supple ride. 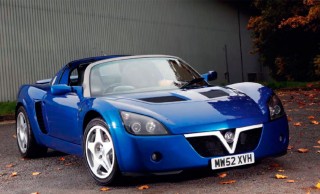 The Vauxhall (or Opel, as the car was marketed for mainland Europe) badging did cause sales resistance when new and that continues even now, but it’s short-sighted. These superb machines are all the more interesting for their mainstream manufacturer heritage. Just don’t take them to a Vauxhall dealer now – Elise/VX specialists have the know-how to look after them properly.

Despite the experts’ views on its high safety levels, three were written off by journalists on the first day of the launch in Spain, proving that it could surprise those expecting normal Vauxhall driving limits. The Turbo of 2003 was even more of a challenge and definitely required circumspection on wet roads, but rewarded with supercar levels of performance. Just be careful you don’t buy one that has been heavily crashed.

Inspect panel gaps carefully and look thoroughly for repairs: a cracked front clam and headlamps may be enough for a car to be written off, so Category C/D cases need not put you off if the damage was limited and properly repaired. The condition of the ‘crashbox’ at the front of the chassis is crucial. Paint bubbling is not usually an indication of poor repairs – it’s a common issue, especially around the bootlid, spoiler and doors, and requires professional baking on repainting to prevent it recurring.

Many VX220s have been tuned, with Turbos putting out 3-500bhp, but those tend to have lots of reliability issues. An Eaton M62 supercharger installation used by GM’s Saturn Ion Red Line and Chevy Cobalt SS (and by Ariel in the Atom) is a popular and well-developed upgrade for NA cars, giving Turbo-level performance.

8 Exhaust heatshield – for presence and damage

Unless wildly uprated and/or abused, the GM power units are under-stressed and durable in the VX. Check service history (annual, or 10,000 miles if used more); max 4 years/40,000 timing belt on Turbo; rattle-free chain on Normally Aspirated. The engine number is on the block close to the gearbox on Turbo, NA on oil filter housing. All cars should have a soft-top. Check that it fits tightly all round, has no tears and the tensioning cables are taut. The OE hardtop was a £1200 optional extra. Plastic end tanks tend to come off the alloy radiator, and it’s a clam-off job to replace. This is original, an all-aluminium replacement rad (at £360) is a bonus. Five-speed Getrag gearbox rarely gives trouble, but check synchros and make sure the clutch doesn’t slip: replacement is time-consuming, so can be costly. Seized balljoints on rear track control arm can lead to catastrophic suspension collapse, so receipts for replacement are good news. Dampers tire quickly. The tyres were specially produced by Bridgestone: front 175/55ZR17 is a unique size; replacing with 16in wheels is an option, as here on rare VXR alloys. NA had cloth seats, Turbo leather (£600 extra on NA). Dash brace was £250, floor mats £60. Inspect aluminium for marks and switches/instruments for function. VX220 goes at least as well as its Lotus rival – the Turbo is quicker, in fact – plus it’s not as frenetic to keep on the boil and the ride is surprisingly supple.

Before test driving, make sure that the car meets all of your requirements, or you may be lured into buying a VX220 with bodywork or other faults – they are that much fun to drive. If the one you try is not, it clearly needs work. It’s vital to go through the service history, which should be complete and include timing-belt replacement every four years (or 40,000 miles if sooner) on Turbos. Normally aspirated cars have a timing chain that is best replaced at 60k miles; listen for rattling on start-up. On both, it’s wise to replace the tensioner and water pump at the same time.

Before starting, turn on the ignition to ensure that all of the warning lights come on – and then go out. The ABS is a favourite – the original twochannel system can go into ‘ice mode’, allowing minimal braking if the brakes are used very hard and many owners disconnect it (although it must be reconnected to pass the MoT test). Fitting the four-channel ABS from the VXR or Exige S2 is the preferred solution.

NA or Turbo, the engine should have serious urge right through the rev range. There’s a slight dip at 3000rpm in standard spec with the Turbo, but that’s often ironed out with a mild remap. Check the header tank (on left in engine bay), because they are prone to cracking (a UV shield is a worthwhile addition). It is cheap to replace, being an Astra part, but excessive water loss could seriously damage the engine if not spotted. The cars are highly sensitive to geometry changes, so budget to get this checked if it’s not been done recently. It could save you a very nasty moment when you explore the car’s limits.

Handling should be pin sharp, unless the tracking is out.

Price bought his Turbo from Vauxhall’s press fleet when it was a year old. “I’ve had no significant problems in 80,000 miles,” he remarks. “I’ve replaced the engine mountings, the odd switch and a brake servo hose. For three weeks it wouldn’t start, until that was traced to a corroded wire on the loom that feeds the ECU, on one of the main connectors behind the header tank. The VX220 Forum is hugely supportive and people will always come and help out if you’re working on your car. “Even over 1700 miles on our annual Scottish Highland weekend, it’s not uncomfortable. It’s always garaged and every drive still makes me smile: the feedback from the steering and chassis is so vivid. It has never been on a track and I prefer to keep it original. I’ve no intention of getting rid of it.”

Against it’s pricey, but you get what you pay for.

This normally aspirated Rabiata Red car has had just two owners, both local to the seller. It’s top money, but that’s down to the low mileage and highly original condition. Unmarked, uncracked and well kept, it has full service history, with five stamps, the latest on 20 January 2014 at 24,693. There’s also confirmation that it’s had the mods to the header rail – all the seals are good – and the rear lights to stop water getting in. It even sports newish (’15) factory-size 175/55x17 Potenzas up front, plus a well-treaded 2010 pair on the back.

The chassis is uncreased, all the visible bonded joints undisturbed, the crashbox undamaged plus the chin, floor and rear diffuser straight and unscuffed. The front anti-roll bar is powdercoated blue, so it may be aftermarket, while the discs and pads all show plenty of meat.

The motor has a dull, slightly corroded cam cover, but its coolant is nice and pink (the antifreeze was changed in 2014). The darkish oil is a bit over ‘Max’. The roof bag remains in the boot, with the Tyreweld clipped in up front. The trim has lasted well, the seat base hide lightly patinated and the side bolsters are not unduly worn.

There are a few scrapes on the far right end of the dash by the coin slot – probably from shoes. It starts easily on the button and drives nicely, with no suspension creaks, a decent ride and an easy gearchange – probably better than an Elise. Coolant temperature is steady at 91-92ºC.

Paintwork is unmarked; alloys, too; MoT runs until August. Cabin is almost as immaculate, with just a few blemishes. A wodge of bills confirms regular servicing of twin-cam.

Turbo was detailed for the shoot by Mawsley Valeting: 07766 863193 or www.mawsleycarvaleting.co.uk

Brakes 288mm ventilated discs all round, with servo and anti-lock

LOTUS ELISE S2 The S2 featured a 120- 156bhp Rover K-series engine until 2005 when the 134bhp Toyota unit was substituted – and later supercharged. Buying issues similar to VX, plus head gasket on K-series.

RENAULT SPORT SPIDER Alloy-chassis roadster, built by Alpine initially with just an aeroscreen. All 96 UK right-hookers have a full ’screen, but no hood or hardtop. Not quite as direct as a VX.