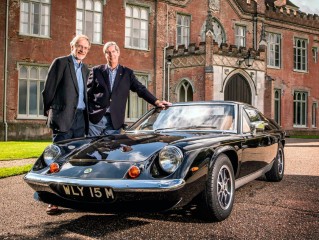 “Tony was fast asleep and it was tracking beautifully at 100mph” So says Mike Kimberley, as he and former Lotus colleague Chris Dunster tell Mike Taylor about their role in developing the Europa Twin Cam. Photography Tony Baker/LAT.

Lotus Europa: meet the men who turned the ugly duckling into a swan. Europa: the inside story. Under the skin of the Lotus Twin Cam.

Just mention Lotus and an image of innovative sports cars emerges: models including the Elite, the Elan, the crisply styled +2 and the mid-engined Europa. Their success called upon the skills of men such as Jaguar-trained project manager Mike Kimberley and design expert Chris Dunster, who both joined Colin Chapman’s company in late 1969.

The Europa came from the drawing board of the gifted John Frayling and was launched as the Type 46 Europe in 1966. The name was quickly changed, however, when the firm found that it had already been registered. The composite body was bonded to a backbone chassis, giving strength, lightness and rigidity.

Measuring just 42in high and weighing in at 1350lb, the car was powered by a Renault 16 drivetrain placed behind the cabin. The 1470cc engine was tuned to give the Europa sparkling performance, while fixed windows and seats plus adjustable pedals suggested a strong racing pedigree. Only the rear buttresses – designed to disguise the height of the engine – came in for criticism for impeding rear visibility.

The S2 arrived in 1969, with a 1565cc Renault motor providing an increase in performance. No longer bonded together, the body was now bolted to the chassis to improve serviceability, while the cabin was vastly upgraded with a luxuriously revised dashboard and electric windows. In ’1971 the Europa received its just deserts: the 1558cc Lotus engine. Originally known as the Europa Twin Cam, a year later the car became the Europa Special and gained a power increase (to 126bhp, thanks to the Big Valve head), as well as a five-speed ’box. Performance was increased to 125mph while the 0-60 time was down to an impressive 7.7 secs. The model was nominated Best Sports GT Car of the Year in 1972. 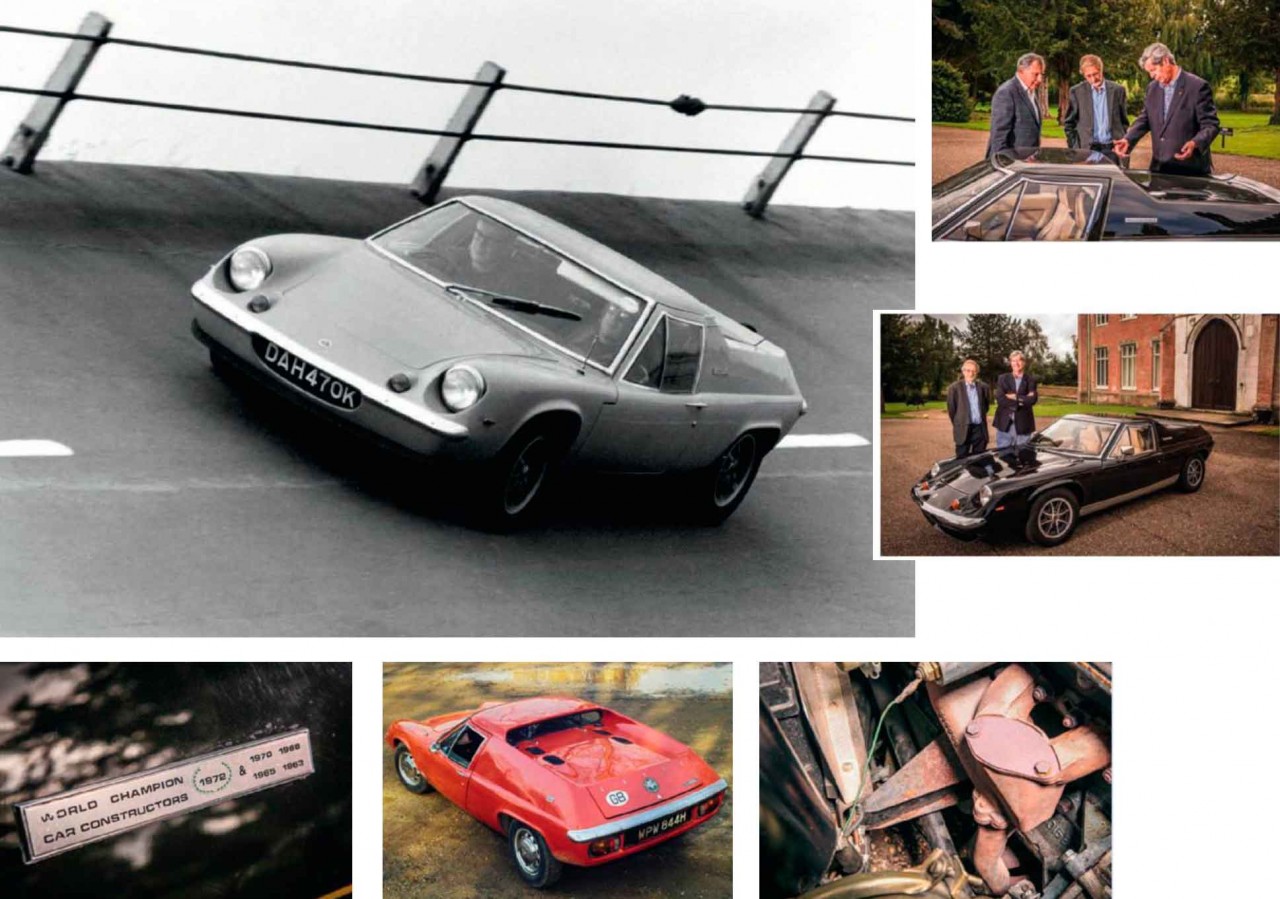 To give the Lotus a thorough examination, we’ve reunited both Kimberley and Dunster with the Europa Special of Colin Chapman’s former pilot, Mike Hamlin.

“This model was produced to celebrate the joint venture with the John Player Special brand in F1,” says Kimberley. “They were our sponsors, hence the black coachwork with gold pinstripes, which made the car an iconic Lotus. It still looks fantastic today, and signalled a definite step forward over the Renault-engined versions in every way: suspension, steering, ride, handling and performance.” The original had been like a road-legal racer, allegedly nicknamed ‘Colin’s whizzer’, but, as Kimberley adds: “The Special was a user-friendly high-performance sports car.”

“This was so much more mature than the first models,” remarks Dunster. “To pass US safety regulations, the front of the Renault-powered car had to be jacked up to raise the headlamp height. It looked ungainly. This is so much more refined, especially with the ‘Brand Lotus’ alloy wheels.”

The Twin Cam programme was significantly more involved than simply installing a larger engine. “We had a very small, creative and dedicated team so it was relatively straightforward to accomplish,” muses Kimberley. “This entailed marketing, customer and dealer priorities, plus our own engineering objectives including quality, warranty and performance targets to meet.”

At the front, one alteration over the previous version was the air dam added below the apron. Kimberley comments: “With the greater power of the Twin Cam we needed to increase the cooling, which involved a larger-capacity radiator and a better fan. Colin Chapman also requested improved aerodynamics. Although the boss was totally against an air dam, Oliver Winterbottom developed this chin spoiler at MIRA. It’s absolutely critical to providing stability, and gave us the crucial high-speed downforce and balance.”

The chromed front bumper, meanwhile, was originally from a Ford 105E Anglia, and is cleverly integrated. The angle of upsweep dictates the line of the apron as it progresses rearward to meet the bonnet, scuttle and windscreen.

To help understand the degree of research involved, Kimberley has brought along his quarter- scale design scheme from September 1970, which defines the chassis frame/body, powertrain, suspension and steering geometries, plus the internal packaging.

“In raising the ride height we completely redesigned the suspension layout, including the steering, eliminating the nose-up attitude, but with increased wheel travel,” he explains. “This included a new front damper to minimise ‘dead length’ and provide optimal ride and handling. “To withstand the increase in horsepower, we redesigned the chassis to create a stronger structure.

Weeks were spent perfecting the locating points for the rear radius arms. The suspension is rather complicated, involving the radius arms/ mountings, driveshafts, lower links and powertrain mountings. All these aspects had to be absolutely precise to produce the correct geometry for dynamic bump and roll steer, especially controlling toe-in and camber control. With this arrangement the steering characteristics change markedly in different dynamic conditions. 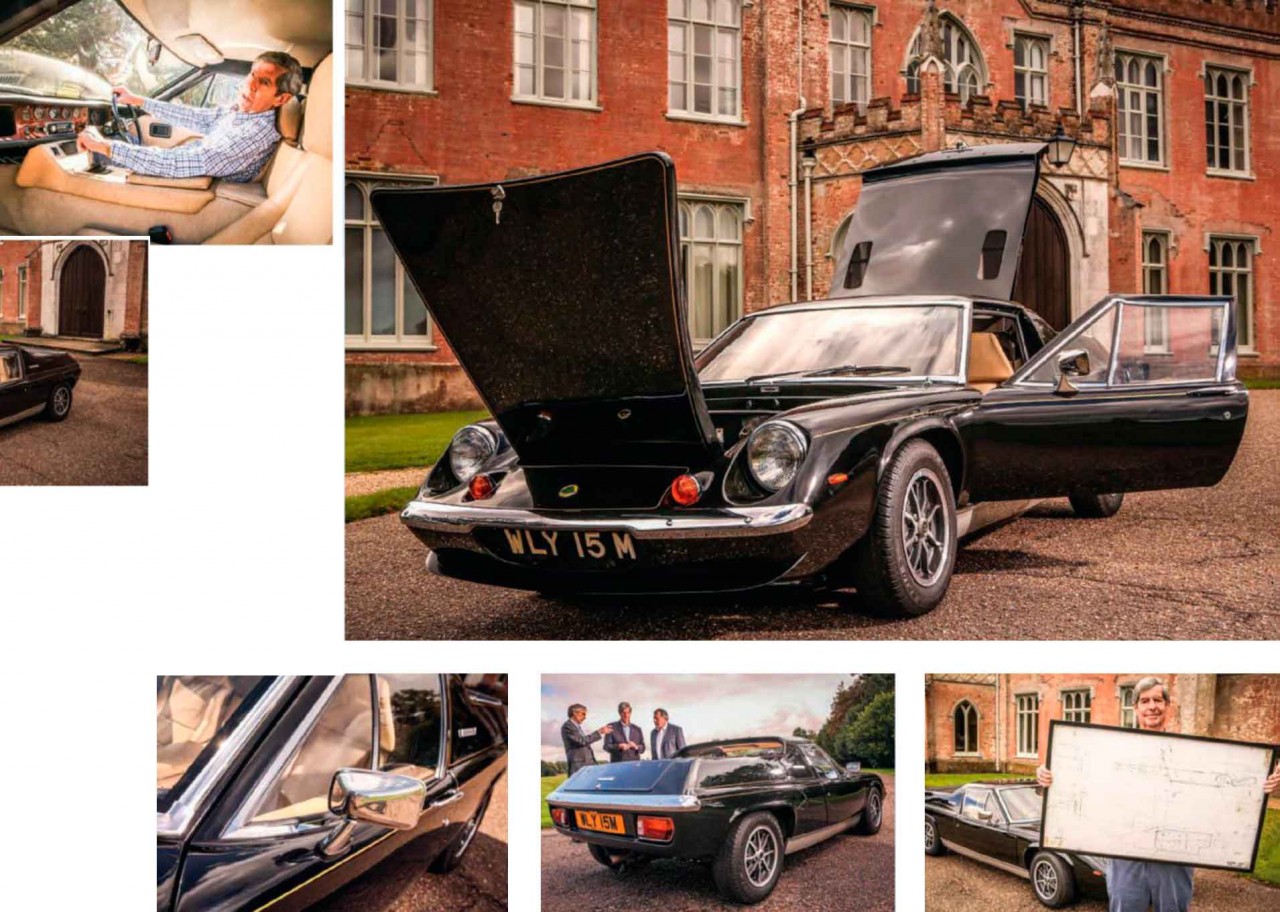 “Changes also had to be made to the twin-link arrangement at the front and the trailing arms at the rear to give the right roll centres, roll axis, roll stiffness, and front and rear ratio with much improved ride characteristics.”

“With the Twin Cam package we did end up with a slightly longer wheelbase, and a small offset of the wheel in the rear arch,” says Dunster. “This was because of the width of the Lotus engine in comparison to the Renault unit, and the chassis modifications required to package it while maintaining structural integrity and observing restrictions on driveshaft angularity.”

This was immediately noticed by Chapman on the prototype, the Lotus founder remarking that it wasn’t acceptable. “Luckily,” says Dunster, “Albert Adams, the head of our Composite and Body Tooling team, was able to provide a very clever solution in an area where body surfaces were planned to be unchanged.”

Examining the side, an important feature is the silver sills. “They slim down the car and, like the waist pinstripes, elongate the visual effect,” comments Dunster. Discussing the roofline, we see that the chrome trim along the top of the side windows slopes down, creating an increasing gap with the top of the door and the tumblehome: “That was carried over from the S2.”

Viewing the buttresses, Kimberley points out: “We investigated all sorts of solutions to improve rearward vision, even clear Perspex inserts. They didn’t function practically, though, so eventually we relied on sculpting them away, which worked and had little impact on the aerodynamics.”

Considering engine-bay cooling, Kimberley recalls: “We tried the normal solutions, including low-cost natural air flow with different arrangements of vents. Alas, the ideal for hot idle conditions resulted in the rear screen getting covered in dirt due to suction at speed. On the Twin Cam, the vents were changed to larger ones that were carefully sited to avert the problem.”

Moving to the tail, we find a flick up to the engine cover. Dunster explains: “The rear of any car is important to aerodynamics. The transom panel angle was dictated by the rake of the bumper, projecting a sense of uniformity and integration of design with the area below.”

Raising the engine lid reveals the neat drivetrain installation. Kimberley recalls: “When I designed the front engine mounting Colin took one look, claimed it was too big, and promptly sketched out what he believed was ideal. I’d calculated the loading and stresses so we had a heated debate, which ended up with him saying forcefully, ‘Who’s chairman?’ and walking off.”

Shortly afterwards, the mountings on the first cars began to fail: “We’d made a small batch to my design, which were sent out as replacements and introduced into production. A month or so later I was at my drawing board when Colin appeared and said, ‘you were right’, and gave me a letter of thanks and 500 shares in Group Lotus. “One of my biggest headaches was the gearchange.

At the outset the linkage used Rose joints and pivots, and a lever mounted in a rubber grommet. Colin’s view was that if we used a tube stiff enough it would transfer any load from one point to another, no matter what the shape, so when Renault altered the selector mechanism from the side of the ’box to a rod facing rearwards our solution was the ‘stiff tube’ gearchange.”

Returning to the front of the car, we lift the bonnet. “The mounting of the spare wheel onto the chassis was carefully arranged to give us maximum crash intrusion protection,” reveals Kimberley. “Under 30mph barrier crash conditions, we were able to achieve excellent results for the steering column tests.”

Climbing inside, he continues: “By raising the ride height we were able to lower the floorpan, significantly increasing headroom. We also lowered the transmission tunnel, which created more elbow room and footwell width. We pushed the engine bulkhead as far rearward as possible and reshaped the seats so that they could be moved further back, while greater width made them more comfortable. We also markedly reduced noise, vibration and harshness.

“The Europa Twin Cam was my first overall vehicle project for Lotus and, thanks to a totally committed team, was a success. It completed the same mileage as Jaguar’s exacting standards to prove reliability, and I still remember Roger Becker complaining that because I’d introduced pavé testing, it necessitated him wearing a corset. “Overall, the programme took just ten and a half months and, with a tight control on the budget, the spend was less than £40,000, which was minuscule when one considers that it was a completely new car under the skin.”

Asked if there’s anything that he’d do differently today, Kimberley replies: “After this, we designed and launched a completely new range of cars that were aimed further upmarket. That gave us the opportunity to incorporate new technologies and improvements that we might otherwise have made to the Europa.”

“I recall taking the Twin Cam prototype for its inaugural drive,” says Mike Kimberley. “It didn’t have all the interior space we wanted, which was incorporated later, or the ride quality. But, with engineers such as Roger and Chris working on the chassis to fine tune the radiusarm mountings, it was markedly improved.

“For the first time at Lotus an intense test schedule was introduced, which meant driving to Rome and back every other weekend – some 3100 miles. On one occasion, we had just come down the Grand Saint Bernard Pass en route to the Autostrada del Sole, and I was asleep while Tony Rudd was driving. I was woken by being jerked sideways with a bumpbump tap on the car. Tony was fast asleep and it was tracking beautifully at 100mph, occasionally nudging the kerb. You can imagine the language!”

Clockwise, from right: luggage space is provided in both the nose and tail; Kimberley with drawings from 1970; Brand Lotus alloys and Lucas lights – the latter shared with Elan S4; chromed TEX mirrors also found on BL models.

Mike JR Taylor has not set their biography yet